Mainz (Germany) – the most detailed information about the city with photos. Main sights of Mainz with a description, guides and cards.

Mainz – a city in western Germany, the capital of the federal state Rhineland-Palatinate. Located at the mouth of the river Main, which flows into the Rhine. Mainz is one of the oldest cities in Germany, whose history has 2,000 years old. This is one of the main cultural centers. the country in which Gutenberg invented typography. The city has a small but beautiful Altstadt, and a walk along the Rhine will take You are a real pleasure.

Mainz is located on the western (left) bank of the Rhine, approximately midway between the North Sea and Lake Constance. Height difference ranges from 82 meters to 249 meters above sea level. Annual rainfall is just over 600 mm. Annual average temperature – 10,10С. Summer is warm and humid, winter – soft. 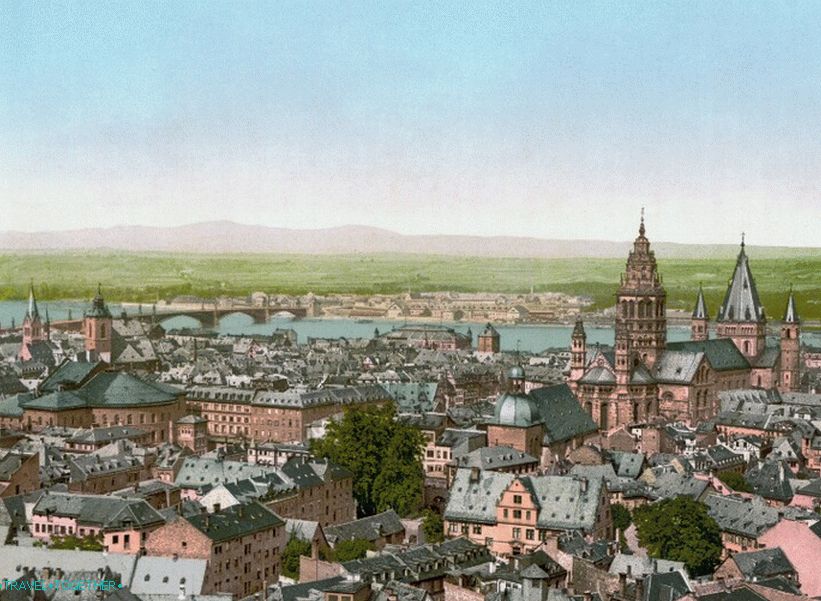 Mainz at the end of the 19th century

The history of Mainz began more than 2,000 years ago, when in the 13th century before AD Roman camp was founded here. Soon the city turned into one of the most significant Roman settlements north of the Alps along with Trier. In 90, Mainz became the capital of the province of Upper Germany. Despite the city wall built in the 3rd century, in the 4th century the city He was ruined by Alemans, and at the beginning of the 5th century by Vandals

In the old town

At the end of the 5th century, Mainz became part of the Frankish kingdom. AT 8 century the city has become one of the largest Christian religious centers of Europe thanks to sv. Boniface In the 9-10th century the archbishops of Mainz not only ruled them, but also had a tremendous influence in the region. For several centuries, they even held several coronations.

In 1244, Mainz received the rights of a free city, which ensured its continued prosperity. In 1450 Johannes Gutenberg invented typography. This invention is considered one of the most significant in the Middle Ages. In the middle of the 16th century the old urban the walls were rebuilt. Despite this, until the beginning of the 20th century it circumstance significantly restrained the growth of the city. During Thirty years’ war Mainz was captured by the Swedes. In the 18th century the city succumbed to baroque trends. At this time in Mainz was built a lot beautiful baroque buildings.

Almost 80% of the city was destroyed during the bombing British aircraft in February 1945.

The nearest airport is Frankfurt am Main. From there the S8 train to Wiesbaden takes about half an hour You to Mainz. You can also get to the city on regional trains leaving for Koblenz and Saarbrucken.

Get on the car:

Mainz is also served by several bus routes that usually stop at the main station.

The most important and interesting sights of Mainz.

Sights of the Roman period 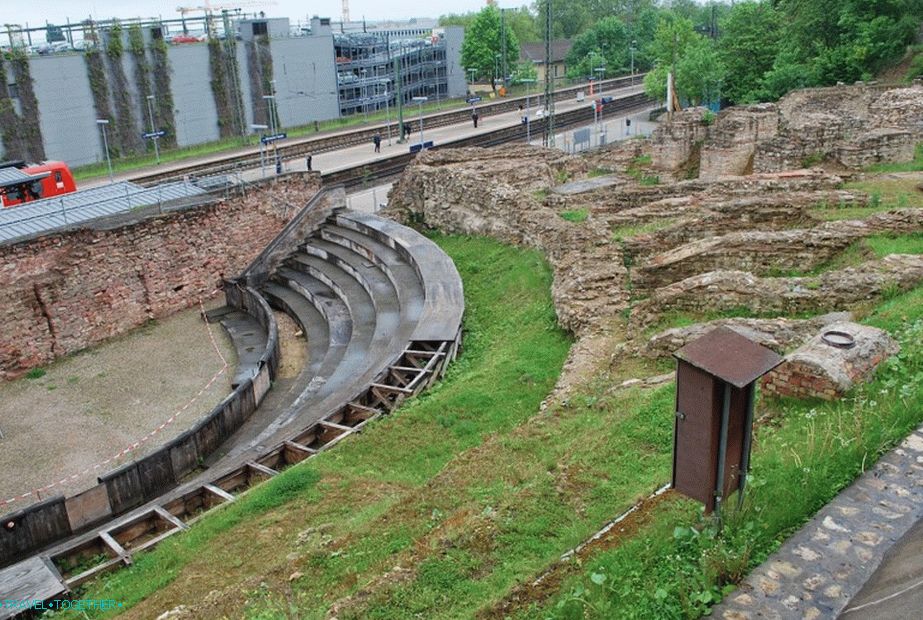 The settlement on the site of Mainz was founded in the era of the Roman Empire, therefore, there are several curious ancient ruins here. One of the main attractions of the roman period is ancient theater. It was opened at the beginning of the 20th century during construction. roads to the citadel. This roman theater is the largest to the north from the Alps. The structure had a width of 116 meters and accommodated about 10,000 viewers.

Tomb of Druze – an empty sarcophagus built after death commander of the legionnaires who founded the Roman camp at the mouth of the Main. AT Middle Ages was used as a watchtower. Landmark is located near the citadel. 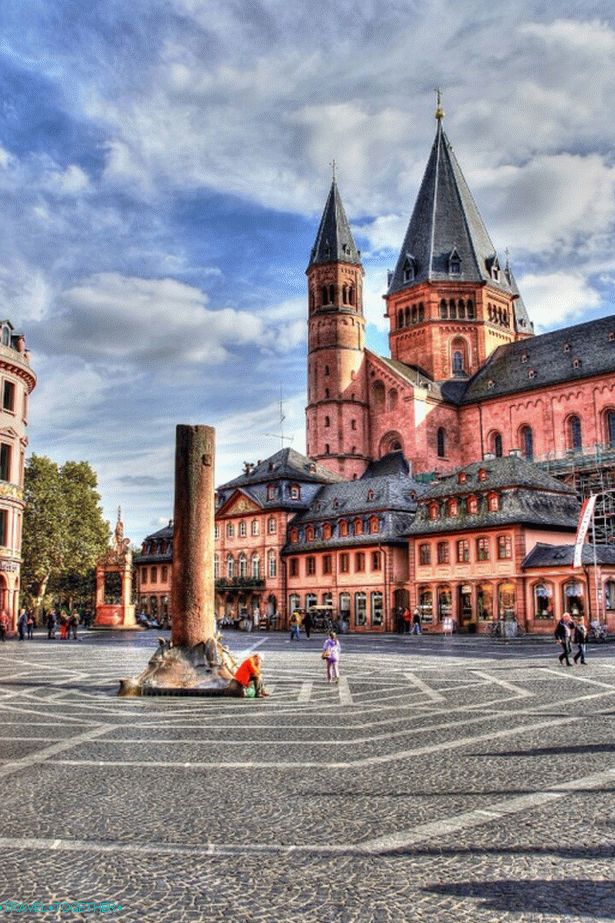 Cathedral of sv. Martina – the main religious building of Mainz, founded at the end of the 10th century. This is a grand masterpiece of sacral architecture. In many ways, the modern appearance of the cathedral was in the 11-13 century. and as a matter of fact represents the whole complex of buildings. For more than thousand-year history several times suffered from severe fires and significantly rebuilt. Here are the old tombs the archbishops of Mainz. The Romanesque chapel is also of interest. St. Gottarda, a late-Gothic abode and a museum with rare books antiquities. Christ Church – beautiful religious building in the style Italian Renaissance, built in the 19th century. 80 meter the dome stands out among the sacred structures of Mainz and reminds cathedral of sv. Peter in Rome. Although the church is Protestant. 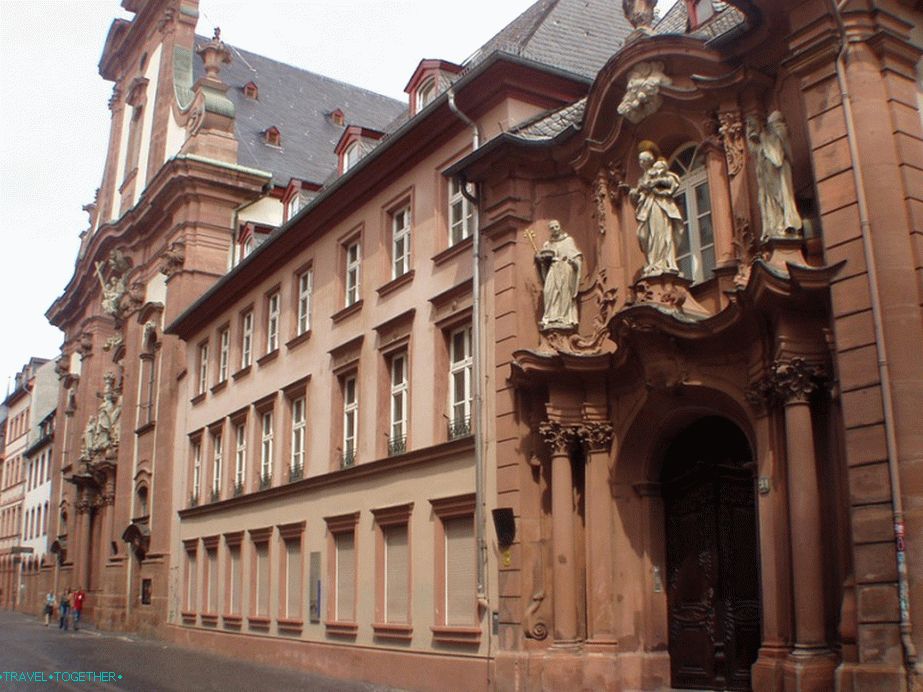 Augustinian church in the center of the old town suffered during the bombing of the Second World War. Church stands out for its beautiful rococo interior. It was founded in 13th century for the poor Augustinian order. In the 18th century, the church was rebuilt and got a modern look. 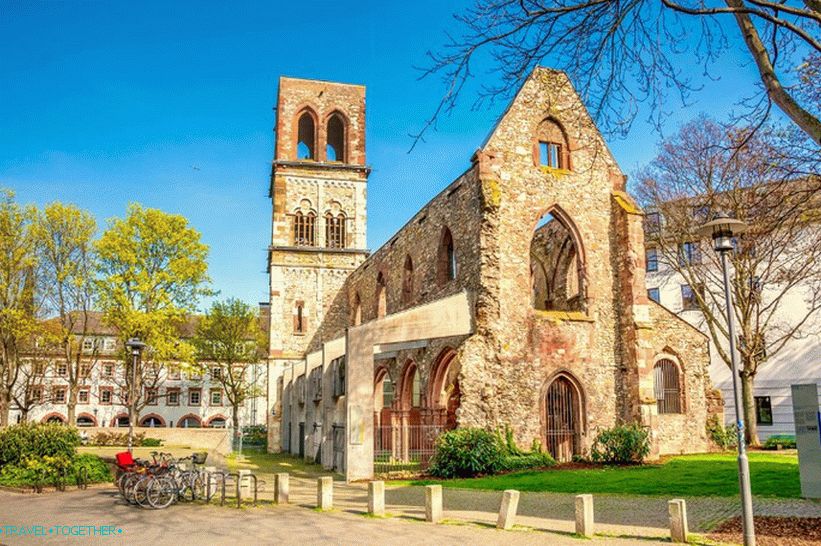 Church of sv. Christoph – an old gothic church built in the 13th century and destroyed in 1945. 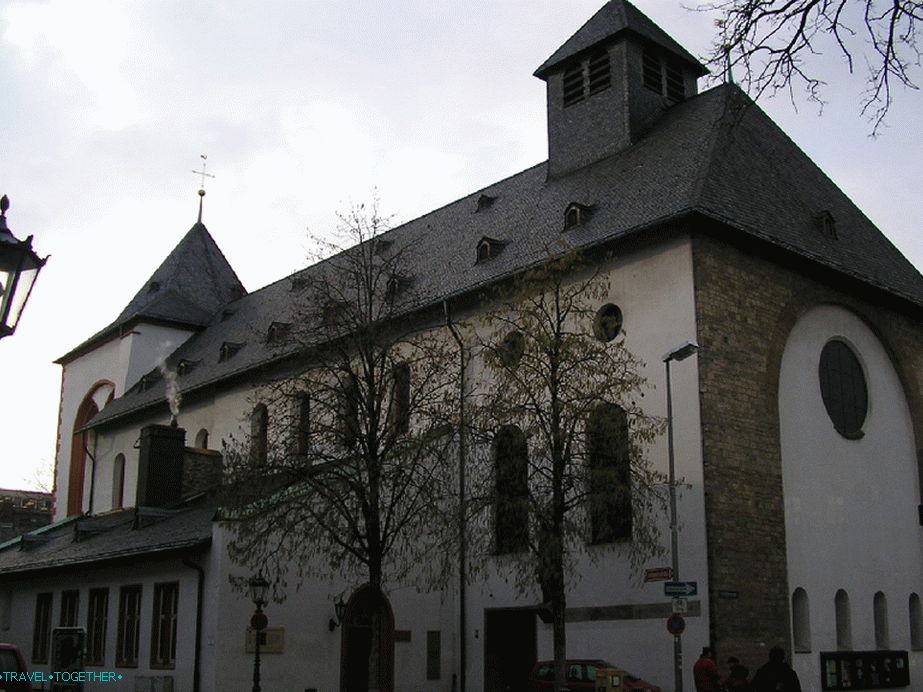 Church of sv. Johanna is the oldest church in Mainz and one of most ancient religious buildings in Germany. It was founded in the 6th century. in the era of the Merovingians. The building has a height of 16 meters. Church retained some of the original elements of the early Middle Ages. AT The 17th century was rebuilt in the Baroque style, and during the Napoleonic Wars were used by the French as a warehouse. In 1828, was transferred Protestant community. 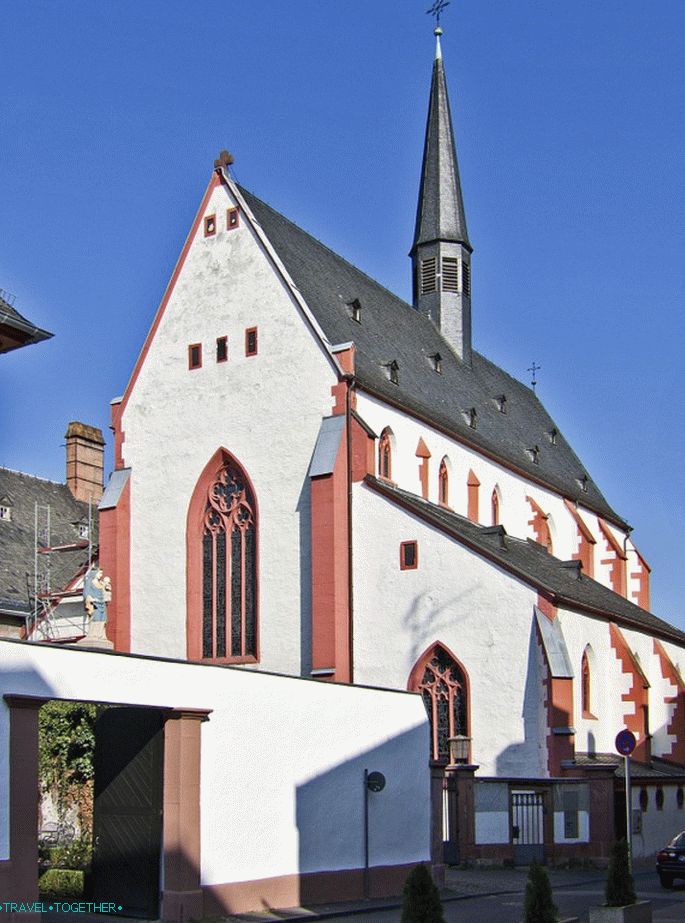 The Carmelite Church is a monastery church, founded in the 13th century. This is the only preserved medieval monastic church in Mainz. During the secularization of the monastery was abolished in the early 19 century. Despite many rebuilding, the church has kept most original items besides ceiling pictures. 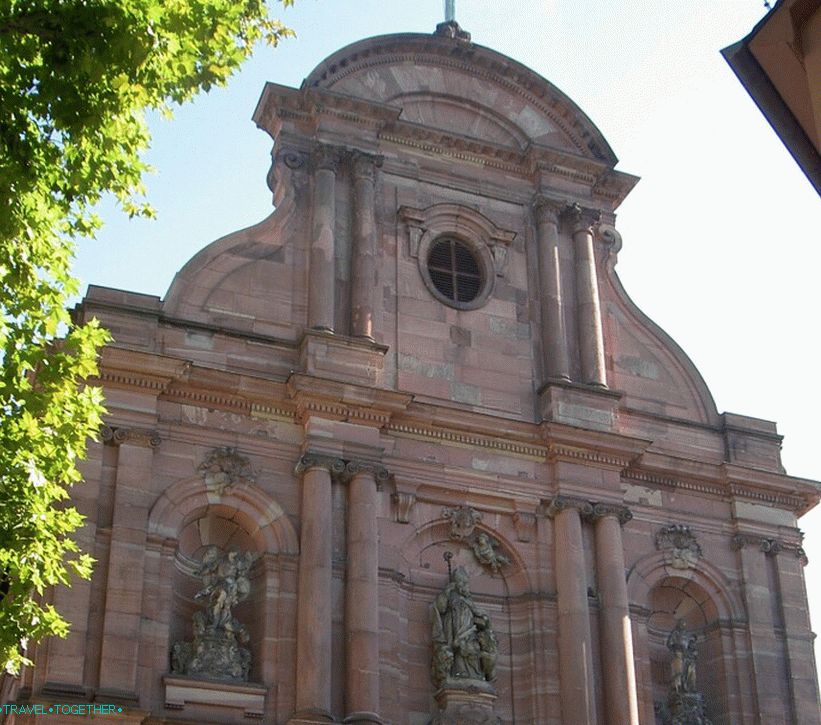 Church of sv. Ignaca is a beautiful baroque church Classicism, built in the 18th century. The red facade is decorated with figures from sandstone. 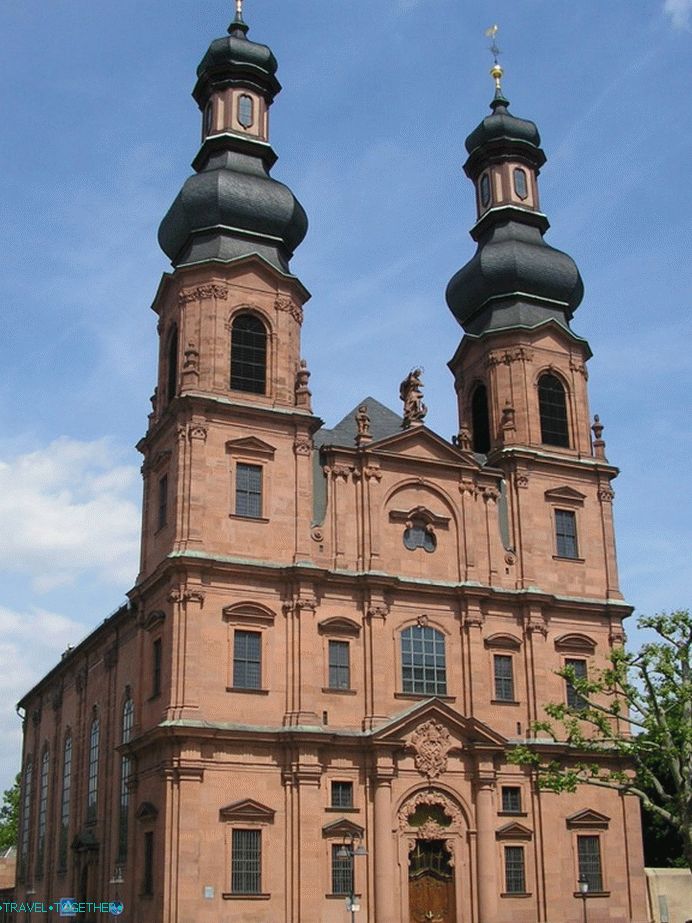 Church of sv. Petra is a masterpiece of baroque and rococo. Was founded at 10 century. An old church building was demolished in the mid-18th century and was built a new one. Here you can find artistic and cultural treasures of the past centuries.

The sights and attractions of Mainz. Old Town or Altstadt is very compact, cozy and beautiful. Quiet areas, carefully restored half-timbered houses, magnificent churches and wonderful baroque buildings add to the old The city of Mainz has a special charm and atmosphere. Facades of houses in style Baroque and Rococo hide shops, cozy cafes, pubs and wine bars. On the winding cobbled streets of Altstadt, it’s nice to walk, here the heart of the city is constantly pulsing and something is always happening. The Gutenberg Museum is one of Mainz’s most interesting museums, where you can get acquainted with 4,000 years of literary history culture. The figure of Johannes Gutenberg, the inventor of print, plays here is a key role. Among the greatest treasures of the museum – two Gutenberg’s original bibles of the mid-15th century. Very interesting is the reconstruction of his workshop. 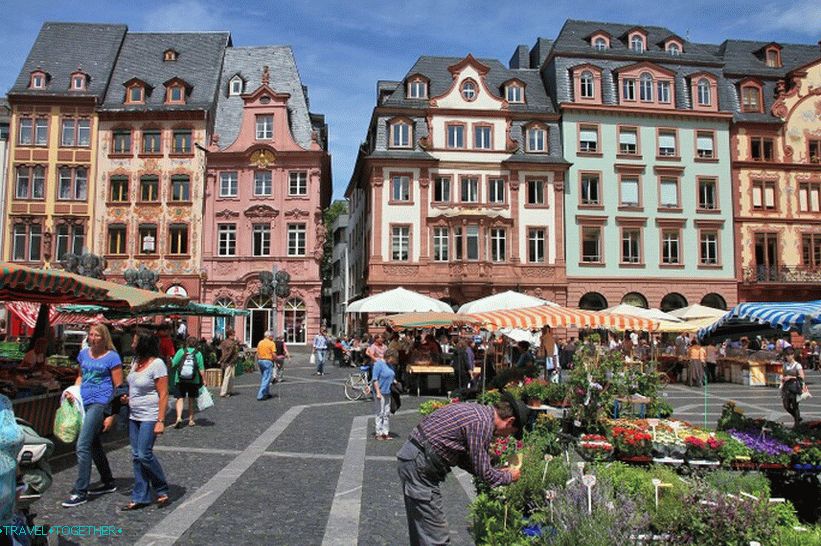 Market or Markt is one of the oldest and most beautiful weekly markets of Germany. It takes place three times a week. From 44 medieval tower gates of Mainz to the present day only 3 survived: Iron, Wood and Aleksandrovskaya towers. 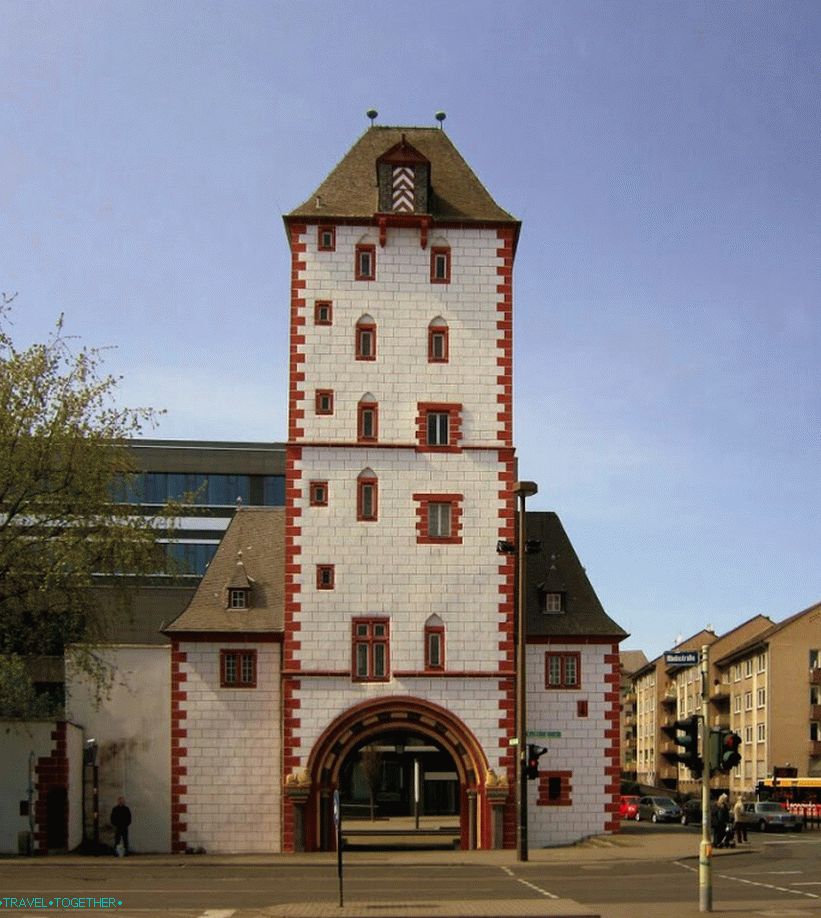 The iron tower was built in 1240 and is located near from the Gutenberg Museum. This six-story tower got its name. from the iron market that was once held here on the shore Reina. Electoral Palace – located on the banks of the Rhine and stands out bright, sandy-red facade. It is a unique An example of late German Renaissance architecture. This is one of The most important secular buildings of Mainz. The Citadel is one of the most important historical monuments of Mainz and one of the few surviving citadels of Germany. Here you can find evidence of the city’s 2000 year history from the roman theater to Lutheran church of the 20th century. The citadel was built in 1660 on Jacobsberg. Gutenberg Square is one of the central and largest Mainz squares. Mainz on the map of Germany