Maastricht (Netherlands) – detailed information about the city from a photo. The main attractions of Maastricht with a description guides and maps.

Maastricht – a city in the extreme southeast of the Netherlands in the province Limburg Located on the river Meuse on the border with Belgium and Germany. Maastricht is considered one of the most beautiful cities in the Netherlands with magnificent medieval atmosphere, many old houses, beautiful cathedrals and charming cobbled streets. This one from the oldest settlements of the Netherlands, founded by the Romans. Also in Maastricht, an agreement was signed on the European union.

Maastricht is located on a plain in the valley of the river Meuse, which divides the city into two parts. Also here are the major channels Liege-Maastricht, Juliana and Zuid-Willems. Climate – temperate with warm summer and mild winter. Maastricht is one of the oldest cities in the Netherlands. He was founded by the Romans at the beginning of the 1st century AD as a military fortress. Also Here was built a bridge across the river Meuse. During this period, the settlement Traktum-ad-Mozam was called. In the 4th century Maastricht became the residence Bishop and until the 8th century was considered one of the religious centers of all Lowland land In the 8th century, the residence of the bishop became Liege, and Maastricht itself almost All the Middle Ages belonged to the Liege clergy and dukes Brabant In 1632 the city became part of the United Provinces. – the first independent Dutch state. However on throughout the course of further history experienced a strong Belgian influence and was repeatedly captured by French troops. Maastricht has its own small international airport with following destinations: Barcelona, ​​Alicante, Antalya, Budapest, Heraklion Amsterdam Schiphol is 3 hours away and Brussels Airport – 2 hours. Maastricht has a direct railway connections with most cities in the Netherlands, and also Liege, Brussels, Paris. 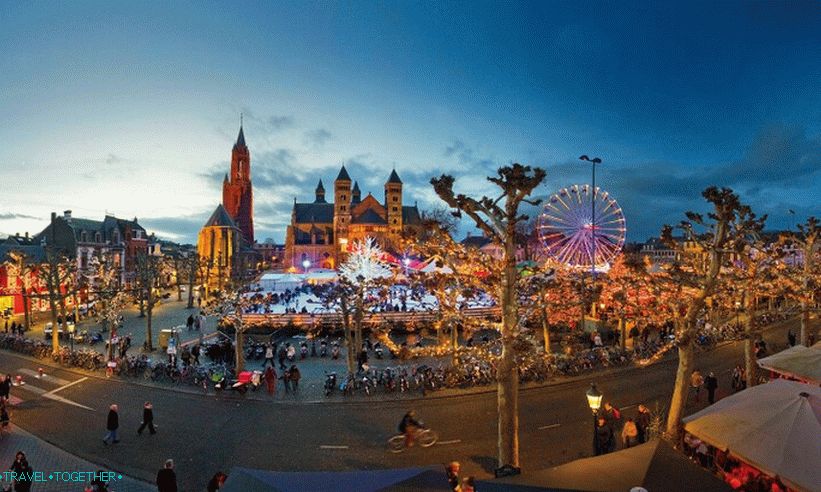 Maastricht has a charming old town with narrow streets, historic squares and old buildings that preserved its medieval character. The river Meuse divides the historical center into two parts. Through the main water artery of Maastricht built several bridges. The most interesting of them – the bridge of St. Servatia.

Bridge of sv. Servatia across the river Meuse

Bridge of sv. Servatia is the oldest bridge in the Netherlands. it The magnificent semi-arch construction was built in the 13th century and decorated with the sculpture of the saint of the same name. Walk along the promenade along the river Meuse will give excellent views of the old city. Church of sv. Martina is one of the most visible structures. embankment of the river Meuse. This is a beautiful neo-gothic church, built in 1858, which replaced the older structure, destroyed by the French at the end of the 18th century. In the historical center of Maastricht you can look at the old city ​​fortifications, including: Hell’s Gate (Helpoort) – the oldest city gate in The Netherlands, which is one of the symbols of Maastricht. This an impressive part of the medieval fortifications was built in 13 century and has two towers. From the city gates also remained Medieval Small Water Gate (Waterpoortje), which were the entrance to the city from the river Meuse. This gate has been restored. in the 19th century. In the northern part of the old town is located the hill of sv. Petra with the fort of the same name of the 18th century. Under the fortress begin the famous Maastricht dungeons – a network of underground tunnels that extend under the old town and have a length of about 200 km. They were built between the 16th and 18th centuries. Some of them open to the public. Square Vrijthof – the largest and most beautiful city square in The Netherlands has two magnificent churches and many beautiful historic buildings.

Church of sv. Servatia (pictured right) – Romanesque basil with important medieval sculptures, a beautiful portal (with a southern side) and a magnificent nave. The church was built in the 6th century over grave of sv. Servatius – the first bishop of Maastricht, who is the patron saint of the city. The rich treasure of the church functions as a museum where you can see a lot sacred relics, paintings and statues, as well as the late Romanesque chest with the remains of Saint Servatius. In addition, in the church you can look at the old crypt, statues of Charlemagne and the fragments altar of the 12th century. Town Hall – a historic building of the 17th century, which is considered a masterpiece dutch baroque. Nearby is the courthouse with a facade in early Renaissance style. The Basilica of Our Lady is an impressive Romanesque church, founded at the beginning of the 11th century. This building has the appearance of a fortress and once was part of the city fortifications. In the middle of the 12th century to the church crypts and transepts were added. At the beginning of the 13th century was built eastern choir. In the structure of the church stands a late Gothic choir with a large crypt, a side chapel with the image of the Virgin Mary, Western crypt belonging to the early building. The Bishop’s Mill is an original 14th century water mill, which is still working. In the next bakery you can try baking flour made by her.

Maastricht on the map of the Netherlands