Lüneburg, Germany: the most detailed and complete guide to the city, the main attractions of Lüneburg with photos and descriptions, location on the map.

Lüneburg – Hanseatic City in Northern Germany in the historic region of Lower Saxony. Located on the banks of the river Ilmenau, a tributary of the Elbe, about 50 km southeast of Hamburg. Lüneburg is a charming medieval town with a wonderful architecture and interesting sights, literally built on salt and owed it its wealth. Curves walls of buildings, uneven pavements and streets in Altstadt are not errors builders and cargo of centuries, and the result of salt mining and subsidence ground.

Lüneburg is one of the most interesting cities in Northern Germany. Its charming brick-gothic architecture and charm The old trading city is combined with noisy and youth the atmosphere. Thousands of students live and study here, so Lüneburg rightfully be called a student city. One more The important difference is that the old city is practically not suffered during the second world war. Historical Center Lüneburg retains the original urban layout and plenty historical buildings. In 2007, the city regained its status Hanseatic.

Luneburg is located in the lower reaches of the Ilmenau about 30 km from the merger with the Elbe. The city is located on the plain above the deposits. salt.

The climate is temperate with maritime influence. Warm summer, winter soft enough. The coldest month is January, with an average temperature of about 0 degrees. Precipitation is evenly distributed in throughout the year. Although in the summer they fall a little more. Luneburg can be visited throughout the year, but the most comfortable time from April to October. 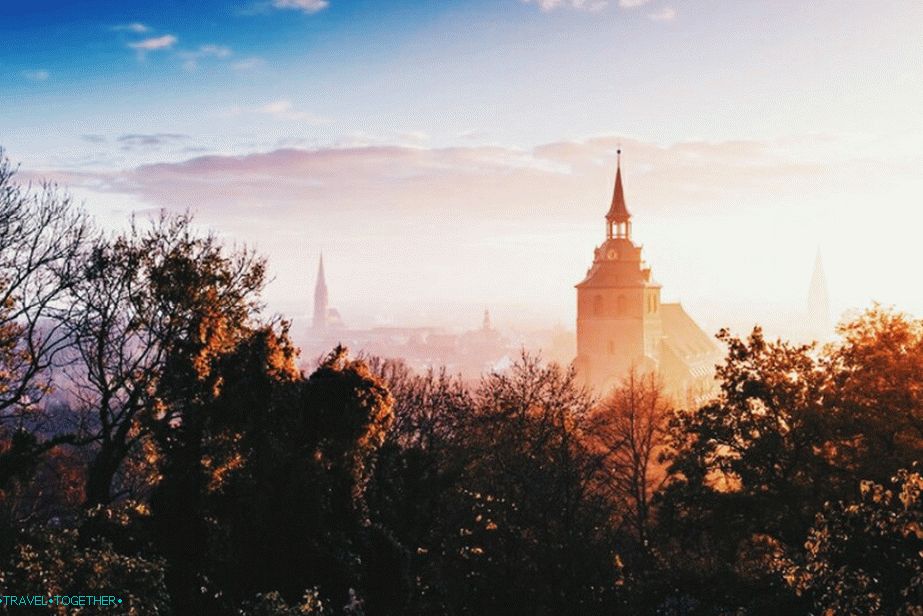 The first mention of Luneburg dates back to the middle of the 10th century. TO By the end of the 12th century, he received city rights and the status of one of the main shopping centers in the region. His monopoly on salt production in Northern Europe quickly led to membership in the prestigious Hanseatic union. Lüneburg was accepted into this union already at the first meeting. Salt Lüneburg was in great demand to preserve herring, caught in the Baltic and North Seas. Originally salt sent along the old salt road to Lübeck, and from there spread over the entire coast of the Baltic Sea.

Lüneburg thanks to salt has become very rich and powerful. In the 14th century merchants expelled the ruler from the city. And in 1392 Lüneburg acquired the status of a free imperial city in which lasted until 1637.

With the collapse of the Hanseatic League, the reorientation of trade routes towards the Atlantic, the importance of the city began to fall rapidly. In 1708 Lüneburg became dependent on Hanover. In 1866 the city became part of the Prussian province with the center in the same Hanover. Surprisingly, during the Second World War no historical the Lüneburg building was not damaged. In 1980, closed the last salt plants, completing the thousand-year history of salt mining. 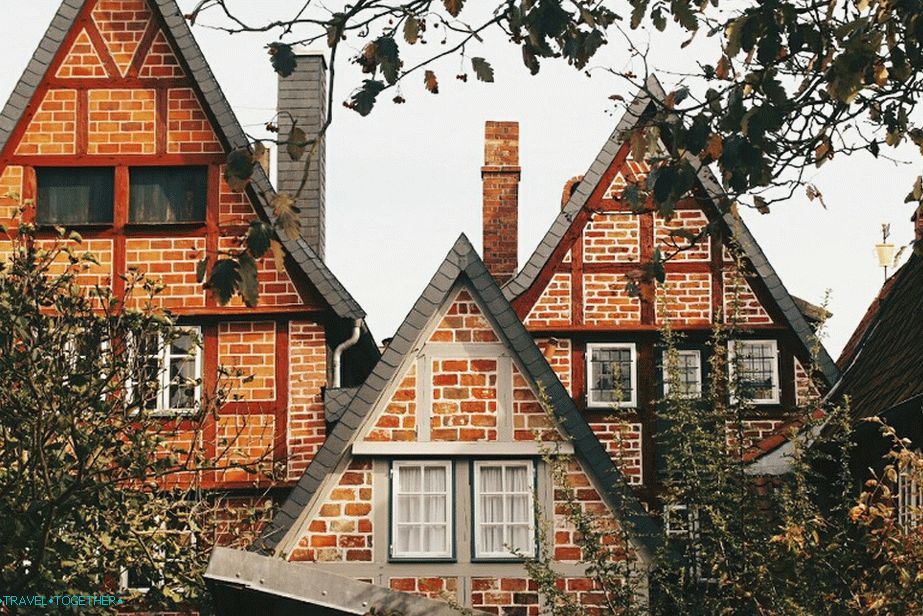 The nearest international airport is located in Hamburg in less less than an hour by train. In an hour and a half of the way are located airports Bremen and Hanover.

Lüneburg is located on the main branch of the Hamburg-Hanover railway. From Hamburg to Lüneburg can be reached by train in less than an hour, from Hannover a little over an hour. Also railway connection connects the city with Lübeck.

No less quickly and conveniently to get to Lüneburg by car. Highways connect the city with Hamburg and Hanover. 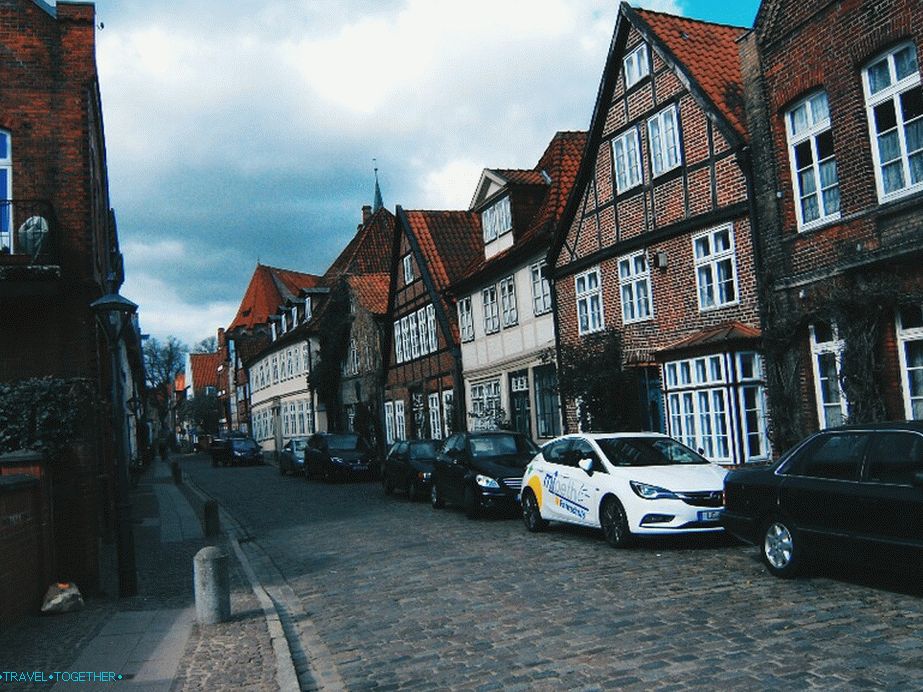 In addition to attractions, interesting history and charming architecture, Lüneburg offers excellent opportunities for recreation and entertainment. In the historical center of the city In the old Hanseatic houses you can find many shops and shops with wide range of goods: from souvenirs, food to clothes and shoes. On summer days, Lüneburg gets fun. Mediterranean atmosphere when numerous street places. In total, there are more than 400 public places. food and a huge number of pubs (one of the largest in Europe). Lüneburg is famous for its reputation as one of gastronomic centers of the region. Be it a restaurant on the waterfront or numerous terraces in Stintmarkt (an area with an old tap on the bank of Ilmenau and centuries-old houses where salt was once loaded for sending to Lübeck) you can be sure that the food will be satisfying and delicious, the atmosphere pleasant and the beer good. 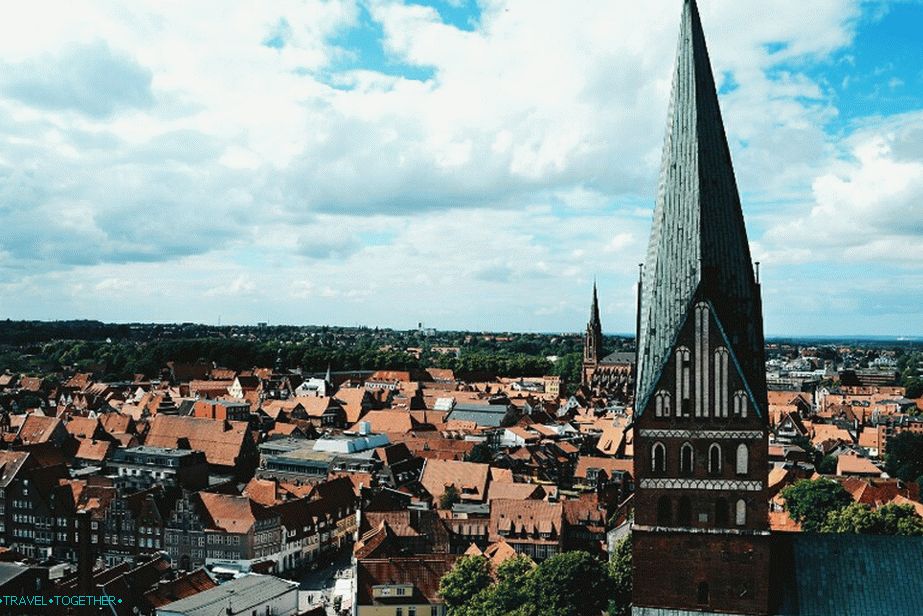 The main sights and monuments of architecture of Lüneburg located in the old town, which is a pedestrian zone.

Am Square Sande and the Black House

Am Sande (with it. Literally on the sand) – the most beautiful area Luneburg, on which there was trade since the Middle Ages. By the perimeter of the square is located a lot of high ornate, perfectly preserved brick houses that are evidence of the wealth and status of Lüneburg. The oldest house (under number 53) refers to the year 1400. The facades of most buildings were built at the end of the XVI-XVII centuries. One of the main monuments architecture is Schütting or “Black House” on the west side square. Originally a former brewery, now a building Chamber of Commerce. 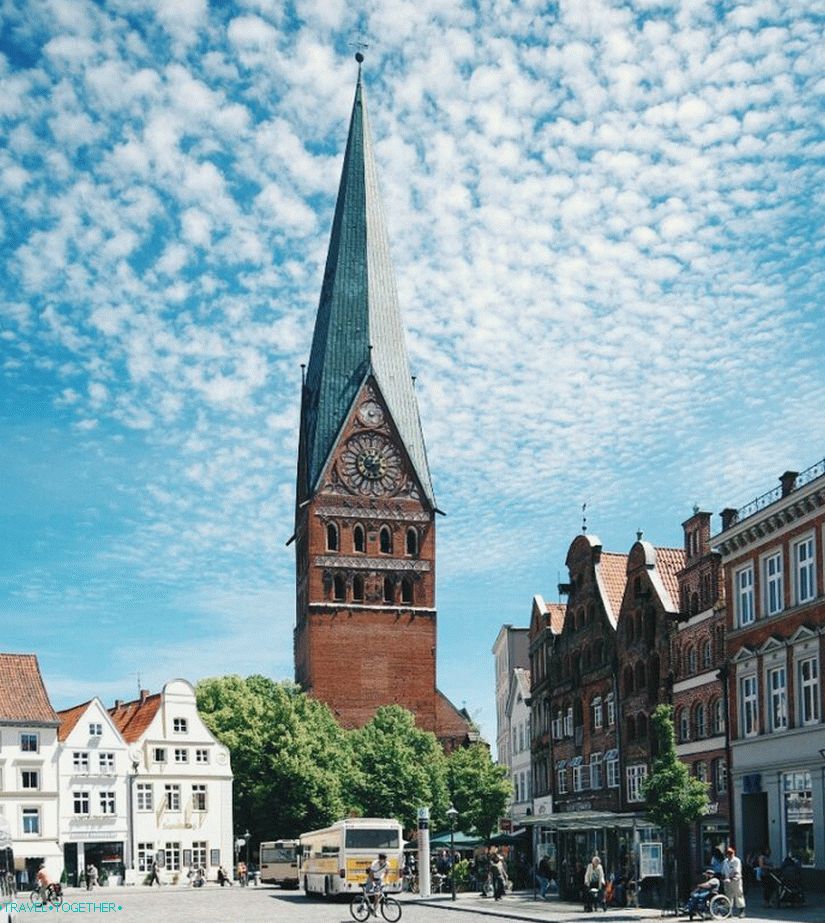 Am Square Sande and the church of sv. John’s

Church of sv. John is one of the oldest brick buildings in Lüneburg. Mentioned since 927 as the Baptistery, that makes it one of the oldest buildings in Lower Saxony The construction of the modern church of sv. John began in 1289. Now it is a Lutheran church, although until the Reformation in the 15th century The church was Roman Catholic. This is a religious building. possesses many treasures and works of art from of the past, for example, the golden tabernacle of the 14th century and many valuable pictures. In the architecture of the church stands a high Gothic tower. If you look at her closely, you can see that she does not is smooth. From the date of construction, the tower has moved almost to 2 meters to the west!

Very atmospheric and interesting place of Luneburg is a Stintmarkt or fish market. First of all it the place is known as the longest beer mile in Lüneburg. Summer many pubs and restaurants here turn into large terraces and beer gardens. Here you can take boats to ride along the river Ilmenau. 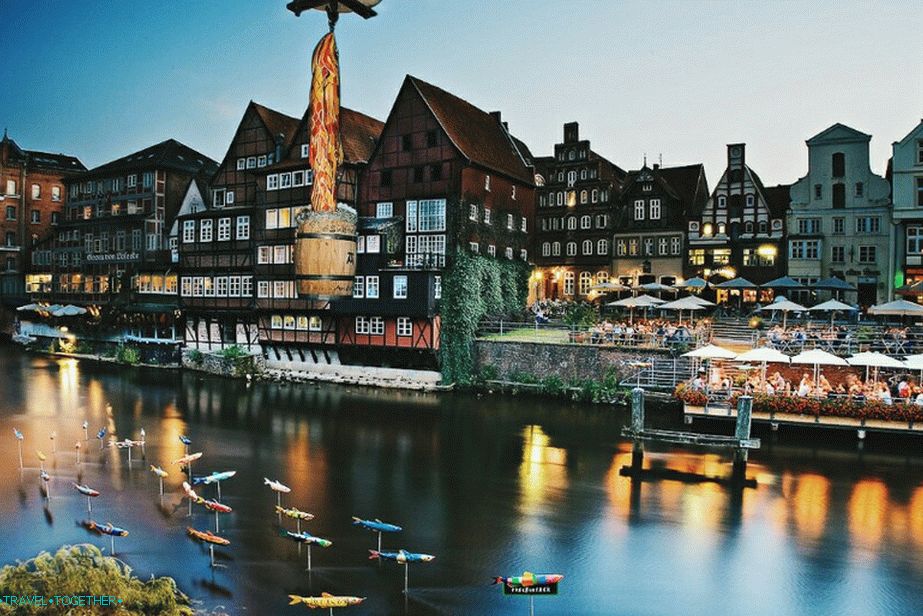 On the embankment in the old river port of Luneburg is located the old crane serving for loading salt. The crane was installed in the middle century, although its present appearance dates back to the 18th century. Last time he used when unloading the first steam engine for an iron road to Hannover. Now it is an artifact of the glorious shopping of the past. 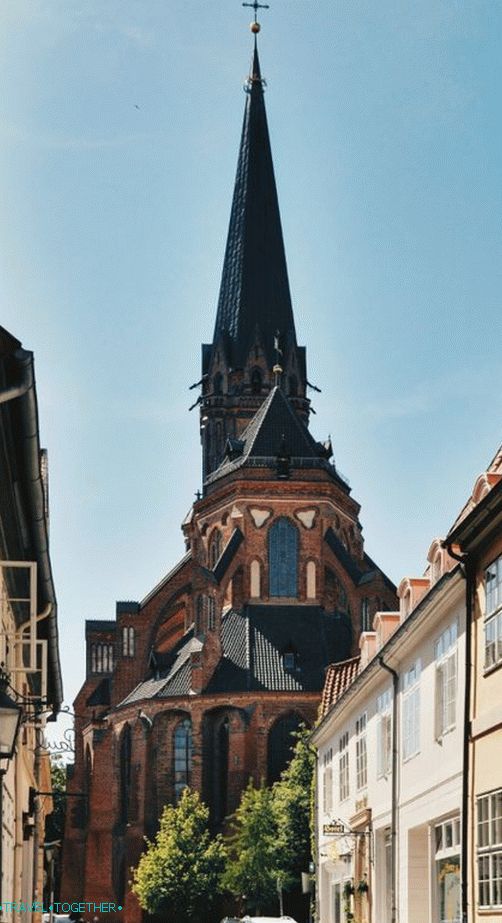 St. Nicholas Church is the youngest and smallest of the three gothic churches in Lüneburg. Located in the area harbor, therefore, was considered a church of sailors. Church building dates from the beginning of the 15th century. The bell tower was built at the end of 16 century, but in 1831 was demolished because of the dilapidated state. A new neo-gothic tower was built until the end of the 19th century. Height it is 98 meters. Despite this, the church of sv. Nikolay retains its medieval character and harbors treasures of the Gothic painting and carving. 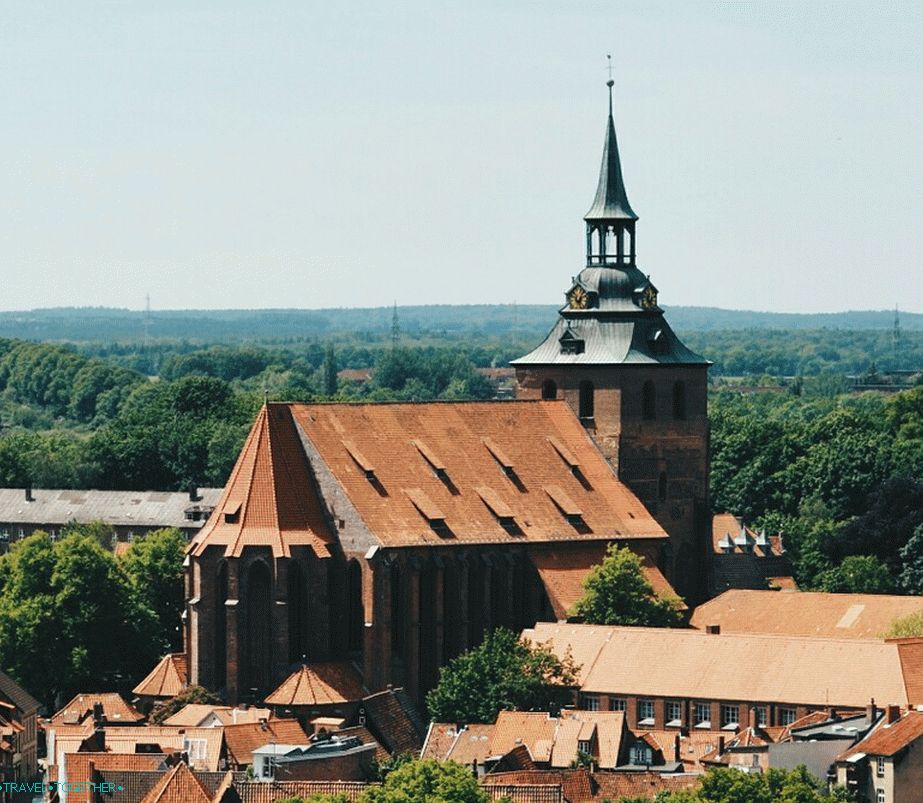 Church of sv. Michael – three-nave Gothic church of the 14th century, built on the foundations of an ancient Benedictine monastery, founded in the 10th century. The interior of the church is quite simple and modest. 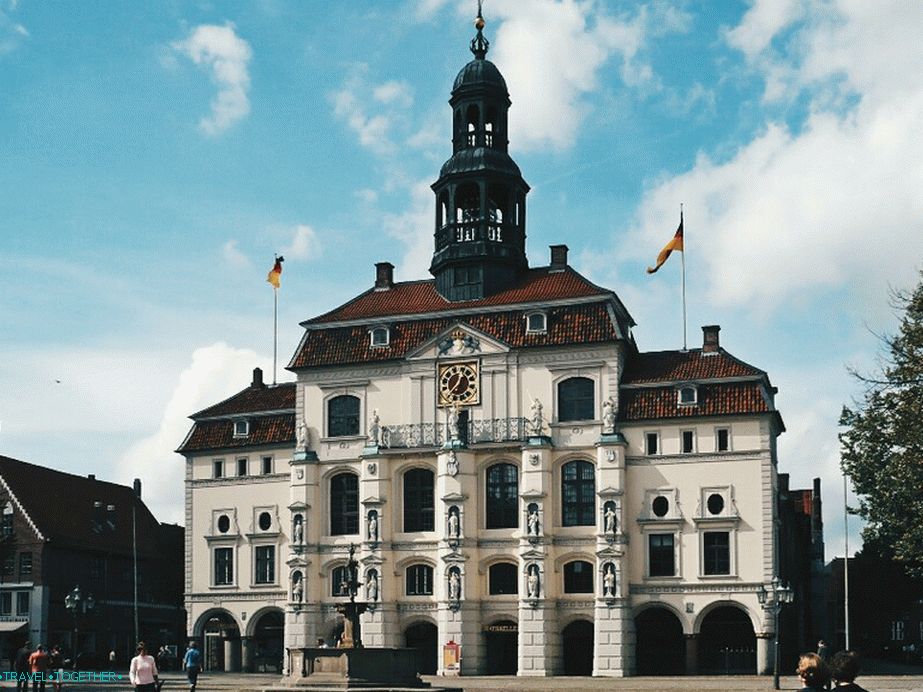 The old town hall is located on the Lüneburg market square. Building is an ensemble of different architectural styles from the Gothic before the renaissance. The construction of the town hall began in the first half. 13th century. 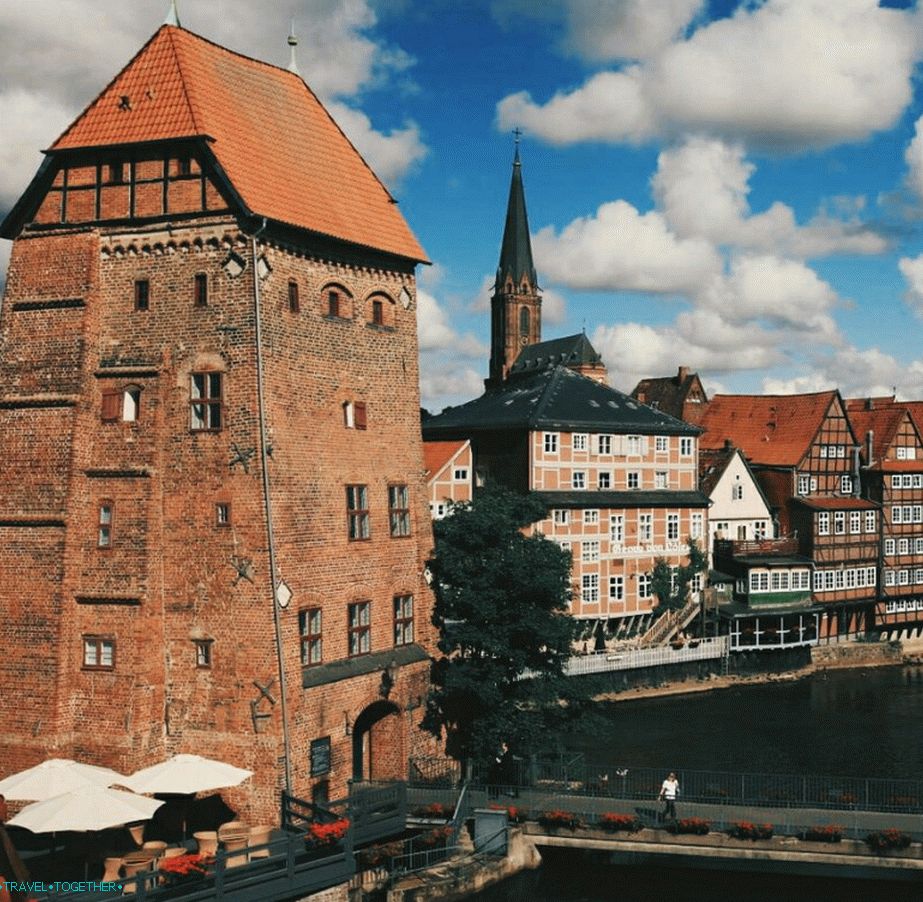 The Abtsmühle industrial mill was built at the end of the 16th century. It used to be part of the monastery. The monks crushed in her grain for making beer. Currently part of the hotel complex.

Other Places of Interest in Lüneburg

Luneburg on the map of Germany