Lubeck, Germany: the most detailed information about the city of Lubeck, main attractions with photo and description, location on map.

Lübeck – a city in Northern Germany on the River Trave in the land Schleswig-Holstein. It is one of the largest ports of the country, the second by largest city in the region, located in the Baltic 58 km southwest of Hamburg. History and unique atmosphere, sights and monuments of brick Gothic, more than 1000 historic buildings – all about Lübeck. The appearance of the city reminds us of its role as one of the founders of the powerful Hanseatic League, which deserved nicknames “Queen of the Hanse”. Here you will find ancient streets, medieval merchant houses, ancient gothic churches, forming the historical core of Lübeck. Recognized by UNESCO as an object World Heritage Site in 1987, today this thriving the provincial town retains many charming corners and interesting places. Old panorama the city of lubeck and the city gate holstentor

Lübeck is the only city in the north of Germany that has extensive medieval old center, not inferior to Nuremberg, Regensburg and other cities of the south. Despite the fact that the historical the center, like the city itself, was badly hit by bombing during World War II, much of the old city has preserved unique features and atmosphere of the Middle Ages, was carefully reconstructed and listed as a World Heritage Site UNESCO. The center of Lübeck largely preserved the original medieval layout. The historical core consists of seven gothic churches, surrounded by parts of the old city walls with two of four city ​​gates left untouched. One of the main attractions and symbols of lübeck are the gate The canvasstor that were depicted on a 50-mark German note until 1990.

Lubeck is located in the open spaces of the North German lowland, the mouth of the river Trave, which flows into the Baltic Sea. City relief is a slightly hilly plain.

Lubeck is located in a temperate zone with significant maritime influence. Summer is usually warm and humid, winter is enough mild with slight frosts, frequent thaws. Thanks to the influence The Baltic Sea here is quite high humidity throughout the year. there is a lot of precipitation that is distributed throughout years fairly evenly. Lübeck was founded in the 12th century. Due to its good position he quickly became a free city and attained considerable wealth and power as the capital of the Hanseatic League 14th to 17th century. The basis of the economy and wealth of Lübeck was trading in salt with other cities of the Baltic Sea coast and their exchange for valuable goods needed and demanded in Germany. Many old warehouses can still be found in the old harbor.

After the vector of maritime trade moved in the 17th century from the Baltic to the Atlantic, the value of Lübeck as the main Germany’s trading city fell and he gave way to the championship northern seaports – Bremenu especially Hamburg. Milestones in the history of Lübeck:

How to get to Lubeck

The nearest international airport is located in Hamburg (HAM). Of Hamburg Airport to Lübeck is best to travel by train. S1 suburban trains (departing every 10 minutes) will deliver You from the airport to the main station of Hamburg, and then from there you can take the train to Lübeck. Travel time is just over an hour. Direct bus service Hamburg-Lübeck Airport terminated.

Lübeck is located about 60 km north-east of Hamburg and easily accessible by car (autobahn A1). With the opening of a new A20 motorway (Baltic Sea highway) in Rostock accessibility of the city has become even better.

On weekdays, commuter trains from Hamburg (and vice versa) run every 30 minutes (weekends and holidays every 60 minutes) .Also, the railways link Lübeck Berlin, Munich, Cologne, Frankfurt, Copenhagen and other cities.

Lubeck and the city of Travemünde- large Baltic ferry port. Ferry service connects the city with many cities. Baltic coast including St. Petersburg. The main shopping street of Lübeck is HÜXSTRASSE. Here there are more than 100 stores selling almost everything: from souvenirs, food and alcohol to clothing and jewelry products. Another famous shopping street -Fleischhauerstrase.

What to buy in Lubeck (souvenirs):

– you can buy other souvenirs related to Lubeck in an interesting shop between the market and the church of St.. Mary’s Lubeck’s Old Town offers a wide variety of establishments that will satisfy most tastes and gastronomic addictions. The following are in great demand. Facilities: Markgraf, Schabbelhauss, Schiffergesellschaft . If you like a beer, you should go to the Alfstrasse district. Lubeck is known for its high density of cozy cafes and “Kneipen” (“pubs”), so be sure to look at the small vintage streets. Perhaps there you will find a very interesting and authentic. a place. If you are a fan of Mediterranean cuisine, you should visit Miera on Hüxstraße. They can also try wonderful wine. Sights of Lubeck on the map

The main attraction of Lübeck – medieval Altstadt (old town) located on an island surrounded by the river Trave and channels. The main attractions of the old city are included in UNESCO World Heritage List. Lubeck offers an amazing variety of different architectural styles, and the streets of the city will delight lovers of architecture and stories. The historic center of Lübeck is not an open-air museum. It is a lively city center. But even so, here you can find many beautiful old buildings intertwined with modern buildings and infrastructure, winding medieval streets and quiet old districts. Part of it is especially well preserved Altstadt – Koberg, located in the northern part of the historic center. And be sure to visit the Lübeck Gänge (transitions and courtyards) – small beds with small houses and charming atmosphere. Kholstentor (Holstein Gate) – a symbol of Lübeck and all Hanseatic League. The grand medieval gate of the 15th century, a monument of architecture in the style of brick Gothic. Included in the list UNESCO World Heritage sites. The gate was part of city ​​fortifications and served as the main entrance to the city.

Holstein Gate consists of two towers, the north and south, their connects the central span. The towers are made of red and black brick windows are made in the form of loopholes. At the moment here is a museum.

One of the features of the old city of Lübeck are seven old churches. Gorgeous brick gothic monuments Architecture – one of the symbols of the city. Tell about the most interesting of them… Church of sv. Mary – a monument of Gothic architecture, one of The most significant sacral structures of Lübeck, built in early 14th century. Construction start date – 1250, date Graduation – 1350 year. This is a grand Gothic building, previously owned by the Franciscan Order, impressive in its size, simplicity and severity of interior decoration. Two spiers rise to a height of 125 meters and visible from almost all parts Altstadt Luebeck Cathedral – the cathedral, the largest religious construction of Lübeck and the entire Baltic coast. The foundation of the cathedral was founded in 1173 by Heinrich Leo on the southern outskirts of the old cities at the mill pond. Lubeck Cathedral is a grandiose three-nave building, one of the oldest monuments of brick gothic architecture. It was seriously destroyed in 1942. Church of sv. Jacob – Gothic religious building in Lübeck, which is often called the “church of the sailors.” This is a three-nave. Medieval church, built in the first half of the 14th century. Known for its 15th century altar, 14th century wall paintings and organs 16th century. The organs of the church of sv. Jacob’s are among the best preserved in northern Germany. Unlike other churches Lübeck was not damaged during World War II. Church of sv. Petra is an old five-oil Gothic church, founded in the first half of the 13th century. From the top of the tower opens one of the most beautiful views of the old city. First romance the church was built between 1227-1250, at 15-16 century rebuilt in gothic style. The church was seriously damaged During the Second World War. Church of sv. Aegis is the smallest of the five ancient gothic churches of lübeck. It was built in the 14th century. Located in the heart of the old artisan quarter in the eastern part old town. Decorated with Gothic frescoes, baroque elements and renaissance.

The town hall is Germany’s oldest acting town hall and one of most beautiful buildings of this type in Central Europe. One of architectural dominant historic center that stands out arcades and small gothic spiers. Here were held meetings of the Hanseatic League until its collapse. Hospital of sv. Of the spirit Schiffergesellschaft (literally from it. “Ship company”) – an institution that has become a landmark of Lübeck. Located in old building of the early 16th century. Suggests to plunge into the atmosphere Hanseatic League, the times of merchants and brave navigators, and also try traditional dishes. 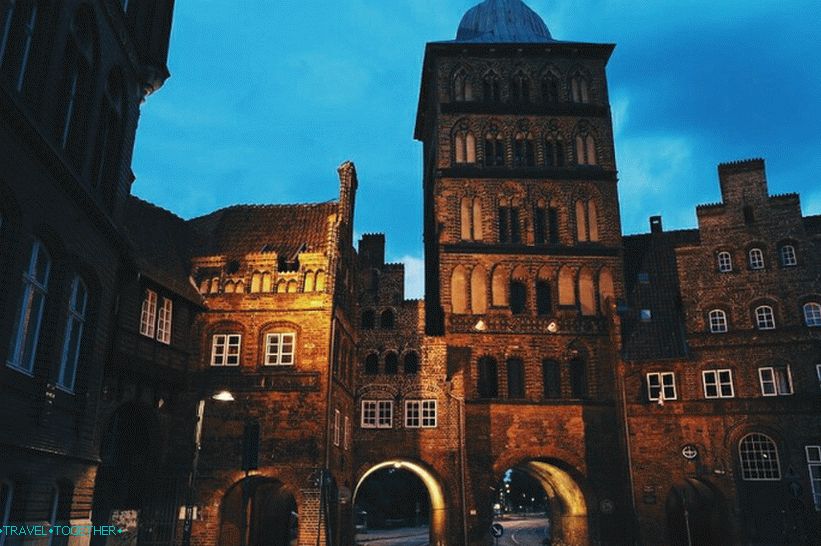 Burgkloster is the most important monastery in Northern Germany, and one of the best preserved medieval monasteries in country. This is one of the most mysterious and mystical structures. Lubeck soaked atmosphere of the Middle Ages. One of his business of cards are the castle gate – a medieval building 13 century with a powerful tower, made of black and red bricks. Decorated with elements of late Gothic and early Baroque. Also here preserved part of the medieval city walls. Lubeck on the map of Germany