Lisbon (Portugal) – the most detailed information about the city with a photo. The main attractions of Lisbon with a description, guides and maps.

Lisbon is the capital of Portugal as well as the largest city and port country. Located on the left bank of the river Tagus on the coast Atlantic Ocean. Lisbon is one of the most beautiful cities Southern Europe with a stunning atmosphere, saturated with sea and sun. The capital of Portugal enchants snow-white limestone buildings, pretty streets with yellow trams and casual charm.

Lisbon is endowed with wealth of historical monuments most interesting museums and cultural events. This is a city of bright architecture, imbued with the traditions of fado music, the smell of food and seafood. Lisbon should be enjoyed in a light and unhurried tempo And you will surely fall in love with his hospitable nature and solar charm.

Lisbon is the westernmost capital of Europe. City located at the mouth of the river Tejo in the southwest of the Iberian Peninsula and occupies the western shore of the bay of Mar da Paglia. The capital of Portugal stretches along the coast from the north bank of the Tagus to the beaches Alentejo Lisbon has a warm Mediterranean (subtropical) climate. In summer, the average temperature is 24 – 26 ° C, in winter – about 10 ° C.

The best time to come to the capital of Portugal is the period from April to October. In winter, despite the relatively warm weather, can be pretty windy. Lisbon is considered the oldest city in Western Europe. First mentions of him date back to 205 BC. er Although there is reason to believe that the Phoenician port was located here even in 2 millennium BC Lisbon was founded by the Romans after the defeat Carthage named Municipium Cives Romanorum Felicitas Julia. Later the city became part of the Roman province. Lusitania After solving the problem of piracy and building walls, defended Lisbon from the raids of Lusitanians, the era of his prosperity. The city becomes one of the most important settlements of the Western Iberia. The Romans built a theater, baths, temples and roads here, connecting Lisbon with other antique cities of the Iberian the peninsula. After the collapse of the Roman Empire (between 409 and 429 years) Lisbon suffers from raids of Sarmatians and vandals. Later part of kingdom Svev, which in the 6th century was conquered by the Visigoths. AT 711, Lisbon was occupied by the Moors, whose influence is still traced in its architecture and culture. In 1108 the city was conquered by the Norwegian knights under the leadership of Sigurd I, but three years later he became Moorish again. Lisbon was finally Released in 1147 during the period of the Reconquista.

The city became the capital of Portugal in 1255. In 1290 here The first Portuguese university was founded. In late Middle Ages Lisbon becomes an important center of commerce between Northern Europe and the Mediterranean. In the 15th – 17th centuries the capital Portugal is one of the engines of great geographic discoveries. It is from here (or rather from the suburb of Lisbon – Belen) the famous Portuguese mariners went to sea, including Vasco da Gama. Between the 14th and 18th centuries Lisbon suffers from strong earthquakes. The most disastrous of them occurred in 1755. It destroyed 80% of the city and claimed the lives of 30 – 40 thousand people. Thereafter the capital of Portugal was rebuilt almost anew. Exactly therefore, so few medieval buildings were built in Lisbon. At 19 century capital of Portugal is growing thanks to industry and commerce. In the 20th century, Lisbon became the arena for three revolutions.

Lisbon is one of the largest transport hubs of the Iberian the peninsula. The capital of Portugal is easily accessible by plane from most major cities in Europe, as well as some cities North America, Africa, Asia. Lisbon has a regular railway and bus connections with major cities in Spain and with most of the Portuguese settlements.

Lisbon has a very efficient public transport network which covers almost the entire city and its surroundings. Most The fastest way to get around Lisbon is the metro. Also city has an extensive network of bus routes and trams. To travel to Lisbon public transport need to purchase a Viva card Viagem green, which can be credited any amount of. Tram on the streets of lisbon

Lisbon Shopping Card gives a discount from 5 to 20% in 200 large Baixa, Chiado and Av stores. Liberdade. Alfama is the oldest district of the city and a true symbol of Lisbon. This is a labyrinth of charming old streets and alleys with architecture from the late Middle Ages to the 19th century. Alfama is famous historical and cultural landmarks as well cozy bars and restaurants.

Castelo de San Jorge is an ancient castle and one of the main the sights of Lisbon. Located near Alfama on top of the hill with a beautiful view of the city. The castle has impressive battlements, a fascinating museum and fascinating archaeological excavations. The Castelo de San Jorge was built by the Moors and conquered by the Portuguese at the end of the 12th century. In 1511 it was expanded and reinforced with powerful walls. For a long time, the castle served as the residence of the Portuguese kings. 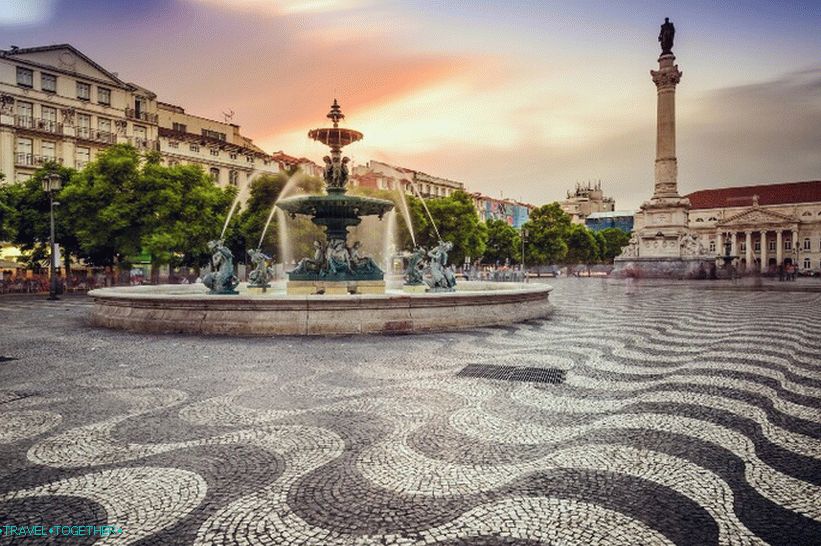 Rossio Square – one of the central and oldest squares Lisbon, the center of city life for many centuries, since the Middle Ages. Here you can look at two Baroque fountain, as well as a monument of 27 meters in height, dedicated to “soldier king” Pedro IV. On the north side of the square is the national theater named after Dona Maria II. it monumental neoclassical building built in the 19th century, with a portico of six Ionic columns. Hieronymos Monastery or Zerominus – one of the greatest the sights of Portugal, a stunning monument of huge historical and cultural value included in the list of objects UNESCO World Heritage Site. This is a masterpiece of late Manuelin style. Gothic, which is located in a suburb of Lisbon – Belene. Monastery was built in the early 16th century in honor of Vasco’s epic journey da Gama, whose tomb is located at the entrance to the church Santa Maria. In Belen there is another symbolic landmark – Torre de Belen. This historic tower is considered the top Manueline style of architecture and is the object of the World UNESCO heritage. It was built in 1521 as a fortress for protect the approaches to the river Tejo. The tower has a terrific ornate decorated facade with fancy sea motifs. 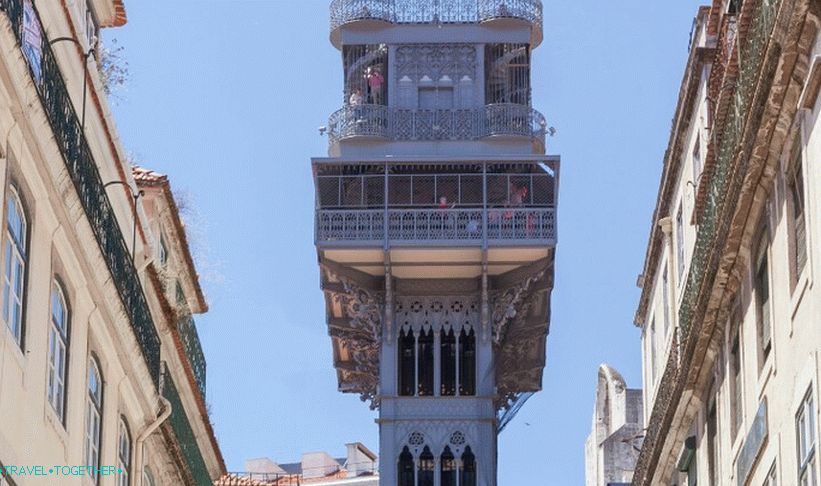 Santa Justa is a neo-gothic elevator in the Baixa area, opened in 1901 year At first glance, its riveted structure is wrought iron and gray paint conjure images of the Eiffel Tower in Paris And this is not surprising, because the architect of this building was a student of Gustave Eiffel.

Se – the impressive Romanesque Cathedral of Lisbon, resembling a small fortress. It was founded in 1150 and built on the ruins of a Moorish mosque. Destructive an earthquake of the 12th century almost completely destroyed the original medieval structure. Now this church is blend of architectural styles. The cathedral has quite gloomy interior and magnificent treasury of relics and artifacts. The Triumphal Arch of the Rua Augusta – one of the friends the sights of Lisbon. The arch is built on the south tip of the main pedestrian boulevard and goes to a huge Plaza Praça do Comércio. This building was built in the 19th century. in honor of the reconstruction of the Portuguese capital after the earthquake 1755 The clock dates from 1941. Carmo Church – one of the most interesting historical monuments. The capital of Portugal and part of an ancient monastery. This is the treasure of the order Carmelites, built between 1389 and 1423 years. Great The gothic monastery was destroyed by an earthquake of 1755. Strong tremors destroyed most of the building, burying under are hundreds of believers. Now the church houses a museum comprising a column of the Visigoths, a Roman tomb and two ancient mummies. Church of San Roque – religious building, founded by the Order Jesuits in the 16th century. The church has an unassuming facade of the era Renaissance and magnificent interior, being one of the most impressive sacred objects of lisbon. San roque just impresses with its ornate decoration, marble finish and gilded elements. Now the church is a museum that keeps treasures of religious art.

Lisbon on a map of Portugal