Lecce (Italy) – the most detailed information about the city with photos. The main attractions of Lecce with descriptions, guides and cards.

Lecce is a city in the south of Italy in the Apulia region. Situated on Salentina Peninsula on the very edge of the “Italian boot” in a place where the waters of the Ionian and Adriatic seas meet, and high picturesque cliffs alternate with golden beaches and forests. Lecce is the baroque pearl of Italy. This is the city that is called “Florence or Rome of the South”. And if not for its location, then Lecce would have become one of the most popular cities country.

Lecce is located in the central part of the peninsula Salentina almost in the extreme southeastern point of the Apennine Peninsula. The climate is Mediterranean. Summer is hot and dry, and winter is warm and rainy. About 500 mm of precipitation falls annually. Most of them falls on a cold period. 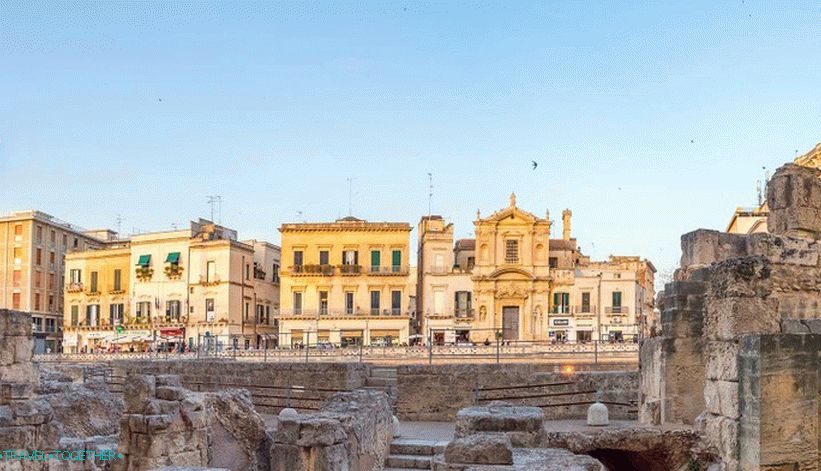 In the 3rd century BC, the Roman Empire conquered the peninsula Salentina and founded a new city – Lupia. The city was surrounded walls, had a forum, an amphitheater, a theater and access to the sea. After decay Roman Empire for some time the territory of Lecce belonged Byzantines. From the sixth century, the Salento was ruled by Ostrogoths, Saracens, Greeks, Lombards and many others. 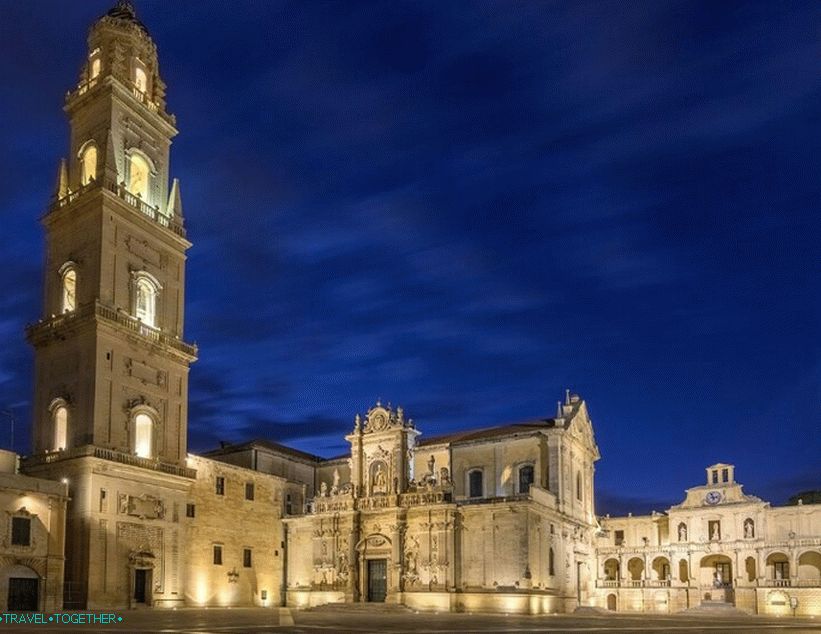 The revival of Lecce as a major port and commercial city began in the 11th century after the Norman conquest. Since 1463 the city has been subordinated to Naples. In 1630 construction begins numerous buildings and churches. It was during this period that Lecce found beautiful baroque appearance. In 1656 the city was almost devastated plague epidemic. Since 1734, Lecce has been owned for some time. Habsburg.

Easier located 580 km from Rome. The nearest airports are in Bari Brindisi, from where there are regular trains to Lecce. They have flights from London, Milan, Rome and other major European cities.

Lecce has a regular train service to Rome, Milan, Venice, Turin, Naples. You can reach the city from Bologna and Rimini through Bari. Trains arrive at the station, which located within walking distance of the historic center. Buses to Lecce also run fairly regularly.

The center of Lecce is full of shops with antiques and organic products. Apulia region is famous for its wines, olive butter, pasta. Lecce is known for its products from papier mache. 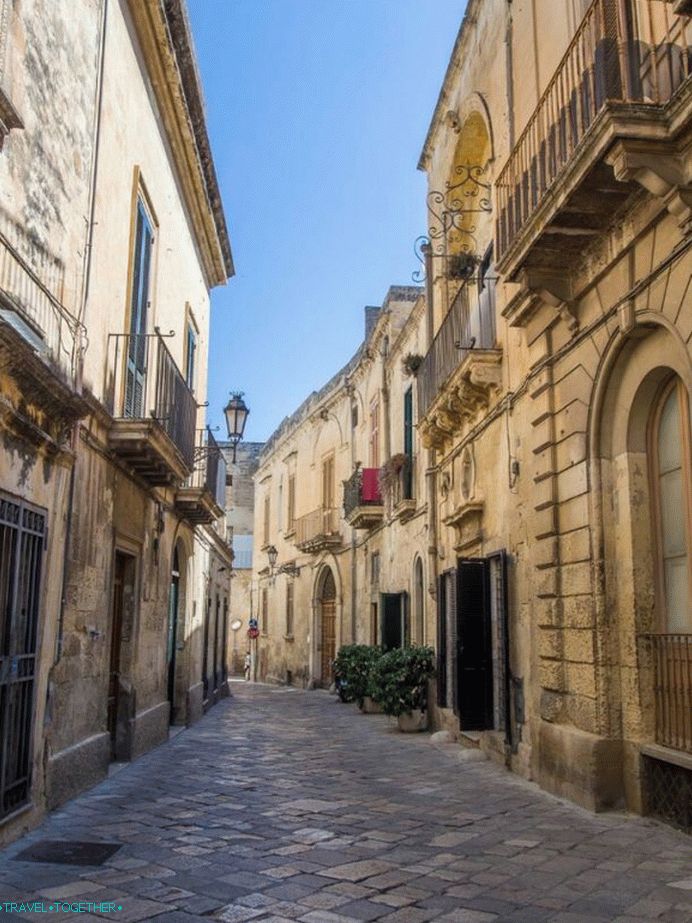 Apulian gastronomy relies on simple but quality ingredients, seafood and fertile land. Traditional dishes are pasta (a variety of which is very large) with bacon, seafood, beans, tomatoes. In Lecce you can try various fish and seafood in a variety of variations – from fish soups to fairly simple dishes. Another tasty typical food is frisalla. This is a solid dry bread that is soaked in water for a few seconds and then eaten with fresh tomatoes and olive oil. Most local dishes are based on using olive oil, and eating is often accompanied by a glass of local wine.

Lecce is often called the baroque pearl. It is not at all is amazing. Baroque style reigns on the streets of the historic center. Passing through Porta Napoli, built in the middle of the 16th century, you get into the old city. 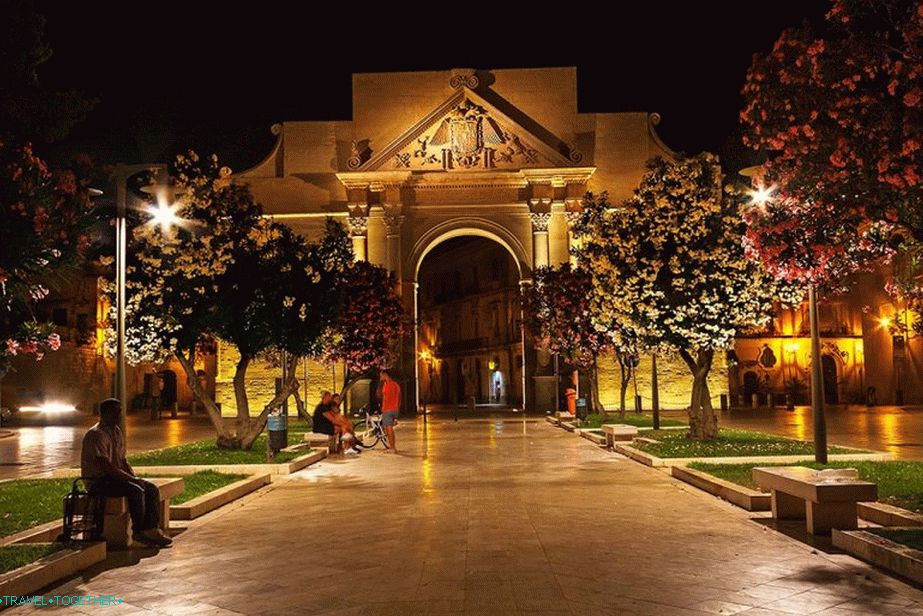 Here begin the main streets where you can admire exquisite sights. On Umberto I Street Adorno Palace and the Basilica of Santa Croce – a symbol of Lecce and a masterpiece baroque. Next you need to visit the square of Sant Oronzo – center of urban life from Roman times with antique ruins. Well, Of course, look at the Cathedral Square, where the magnificent the cathedral and the palace of the 15th century bishop with an angular arched loggia. 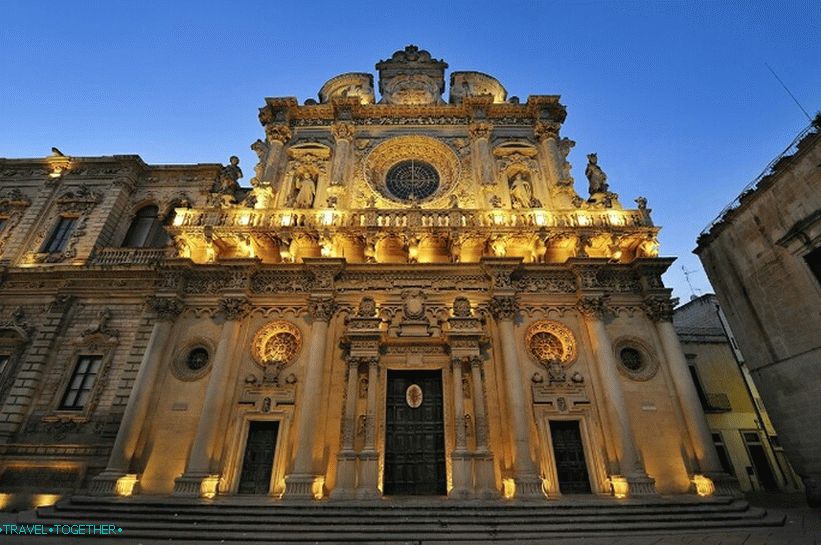 Santa Croce is the most famous landmark of Lecce and one of the most beautiful baroque buildings in Italy. Basilica with Celeste the monastery (now the government palace) is one of the largest architectural complexes of the city. The church was founded in 1353. The Baroque restructuring was begun in 1548 and continued more than one and a half centuries. Over Santa Croce worked the greatest architects Salento. The basilica has a magnificent facade with many sculptures and decorative items. The interior of the church is also very is beautiful. The inner space is divided into three naves and has columns. 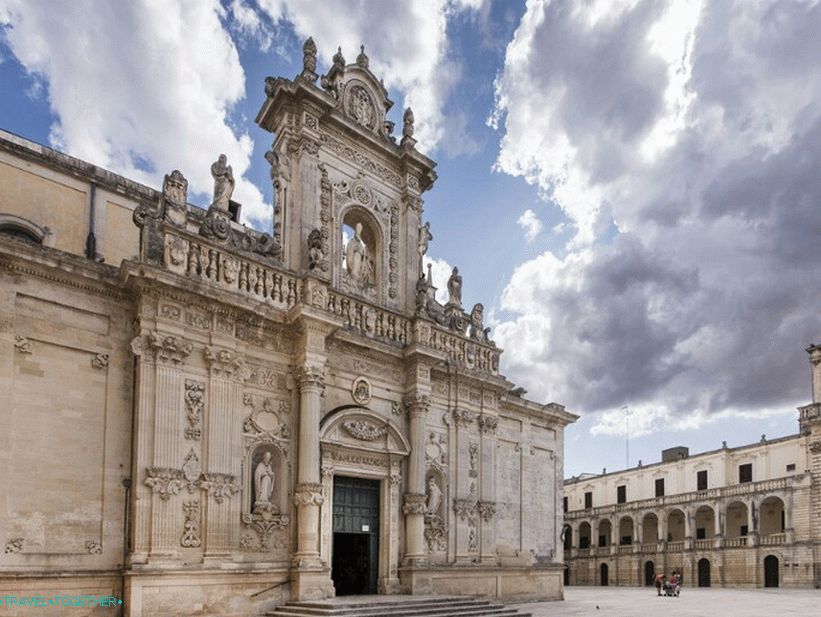 Cathedral Cathedral of the Assumption of the Blessed Virgin Mary

The Cathedral of the Assumption of the Blessed Virgin Mary – the main temple Lecce, founded in 1144. Rebuilt in baroque style at 17 century. During this period, a 70-meter high was attached to the cathedral. Bell tower. The church has two entrances. The main one on the north side of the church is restrained and elegant, and the portal facing the square – it is a riot of complex baroque stone carving, which was eclipsed only the facade of Santa Croce. The interior of the church is very beautiful and ornate. decorated with works of art. 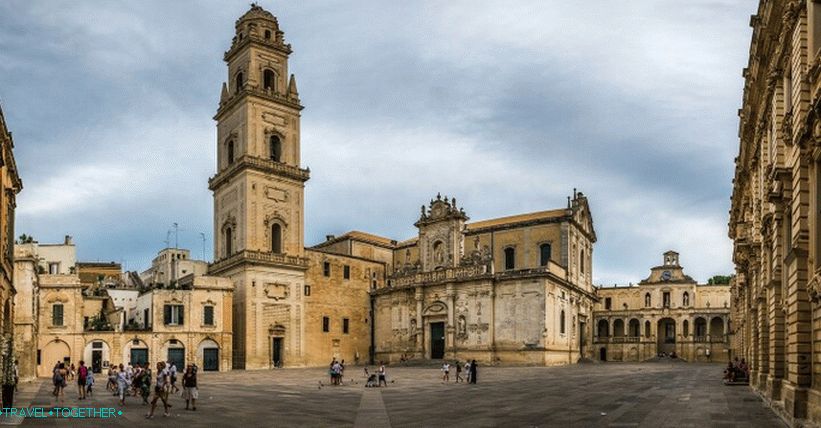 Wide Cathedral Square is one of the centers of Lecce and surrounded by beautiful historic buildings. Architectural dominant, of course, is a cathedral with a high tower. On the square is the episcopal palace with rich carvings on the windows. and the seminary of the early 18th century. 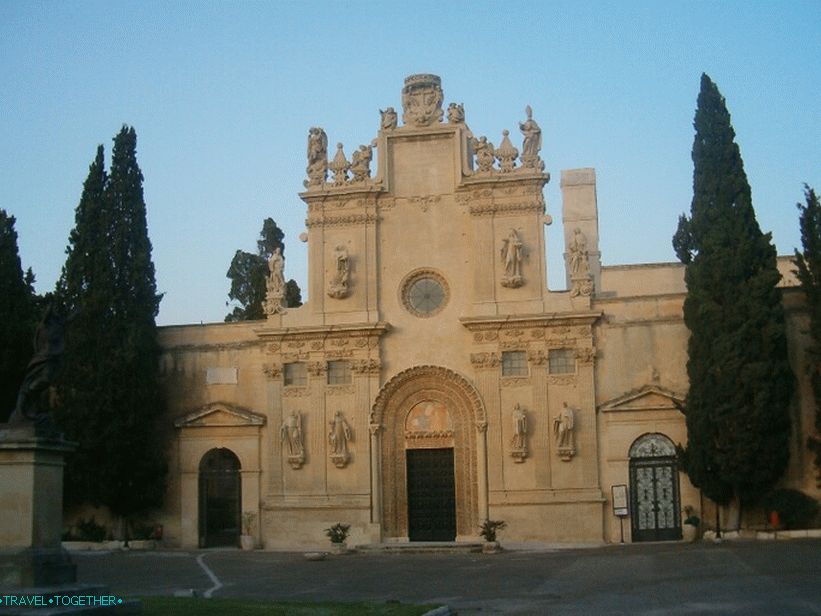 Santi-Nicolo – the triumphal arch, erected in 1548, which is part of the church of the same name. The church is located to northwest of the Napoli gate. It was founded by the Normans in 12 century. In the center of the baroque facade, which was added in 1716, there is an excellent Romanesque doorway of the original church. Around the old portal are several statues of the 18th century. The interior has retained much of the early French gothic style with beautiful carved capitals and arches. Murals are dated 15-17 centuries. 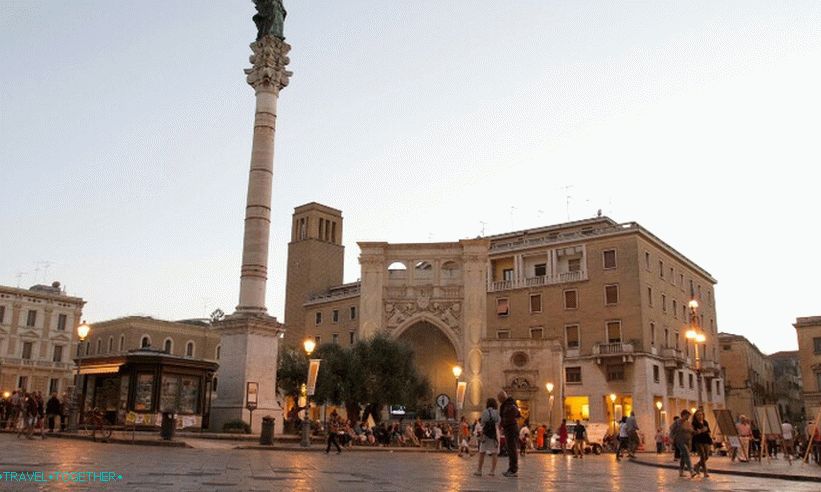 Sant Oronzo – the main square of Lecce and one of the oldest places cities. The square marks the end of Via Appia – Ancient Roman roads to southern italy. Buildings built between the middle ages and New time, have different styles, but look very harmonious. AT In the past, this place was known as “the area of ​​merchants”. Since 1656 Year Square is dedicated to the patron saint of the city. The legend says, that during the plague of Lecce, the patronage of Oronzo helped, therefore his residents erected a tall column with a statue of the saint. Nearby is Palazzo del Sedil, built in 1592, small church Venetian community of San Marco 1543 and the church Santa Maria Della Gracia, which was built in 1590 year 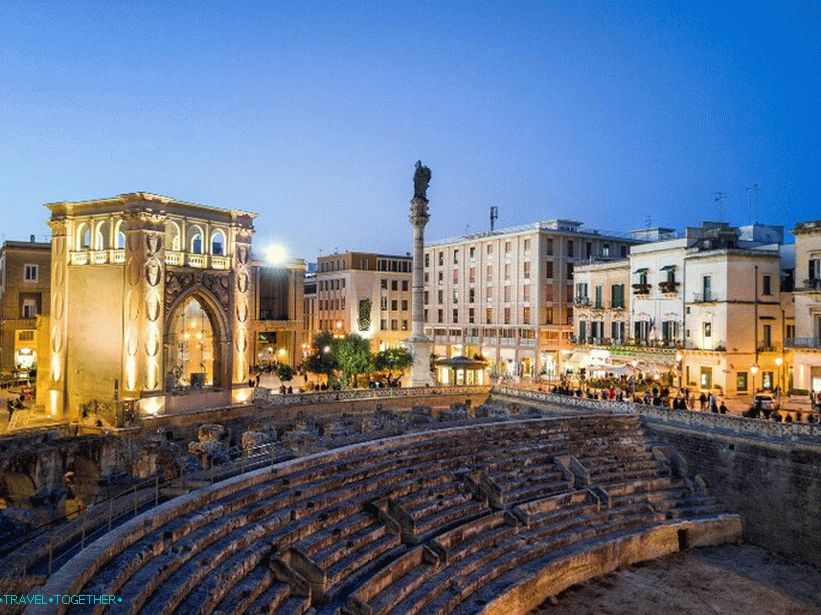 Roman Amphitheater – ancient ruins on Piazza Sant’Oronzo, which date back to the 2nd century AD. Amphitheater accommodates more than 20 thousands of viewers. The monument was completely buried under debris due to earthquake and discovered only in 1929. Today we see only 1/3 of this structure. The rest is apparently hidden under the square. The amphitheater had tuff columns that were capped arcades. During the excavations were found statues and ancient bas-reliefs, which are now on display at the Castromediano Museum.

At the corner of Della Carpatep Street, there are still some ancient ruins that belong to the ancient Roman theater. It was built in 1st century AD and accommodated about 5,000 spectators. 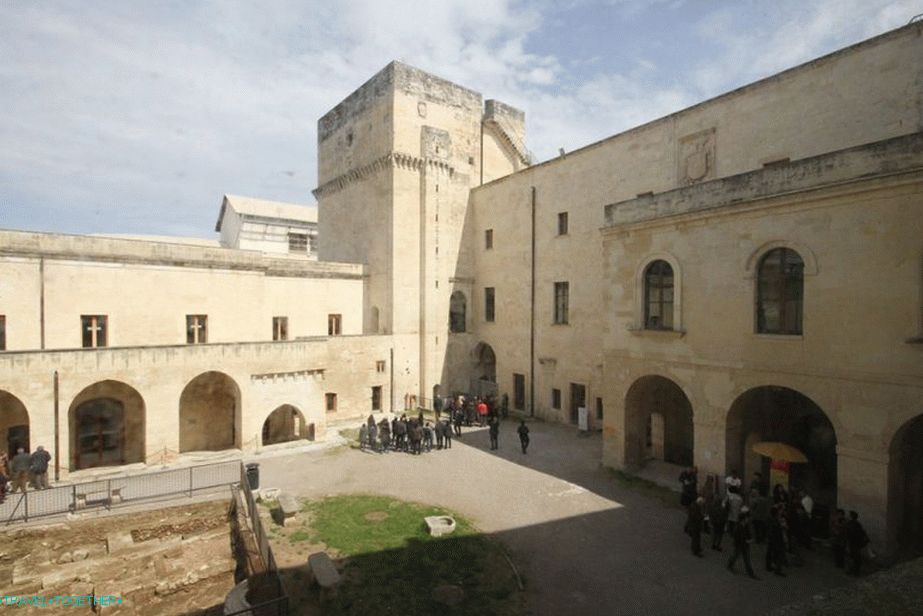 The castle of Charles V – is located south of Piazza Sant’Oronzo. Was built in the period between 1539 – 1548 years. On the first floor there is a fascinating museum of traditional crafts and art. 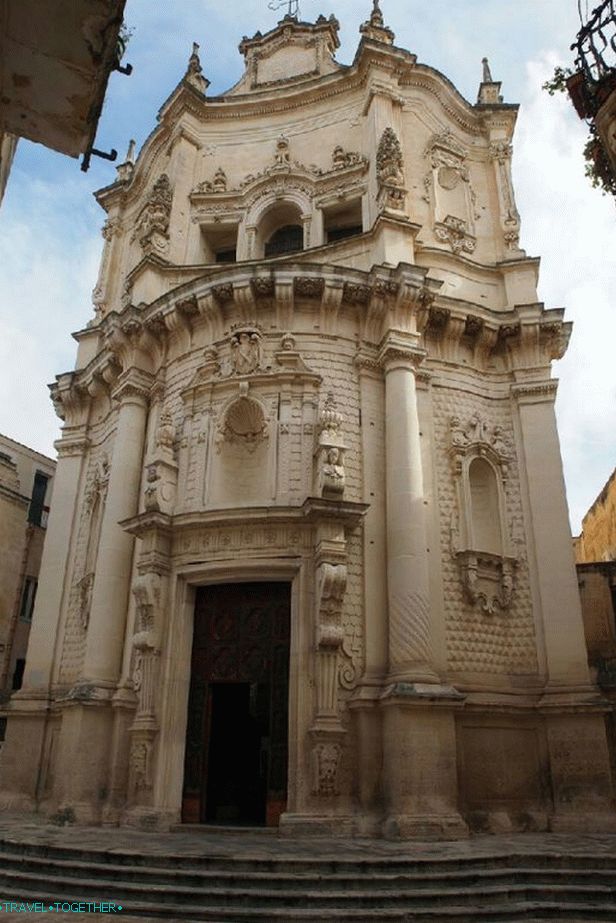 San Matteo is another prime example of baroque. Church was built in 1667. The building has a beautiful facade and interior with an elliptical nave surrounded by chapels that occupy statues of 12 apostles. 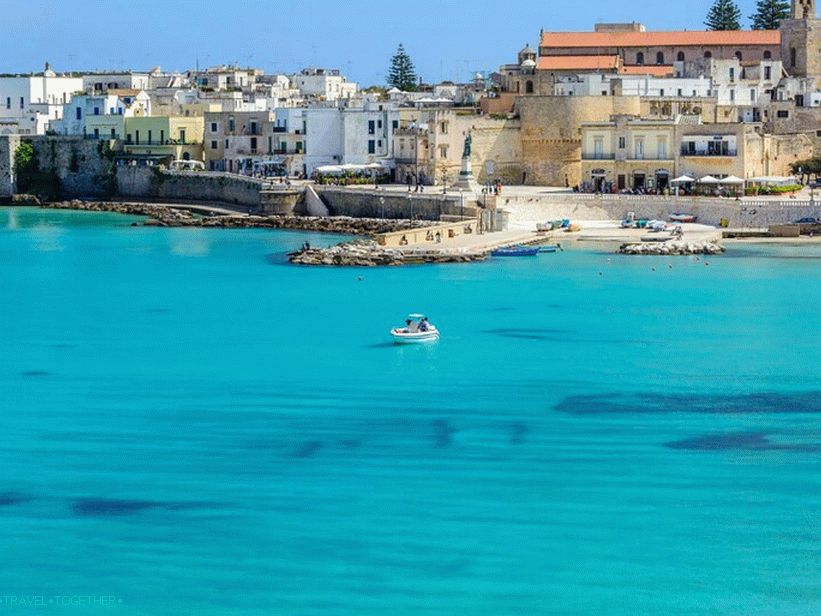 Otranto is a small fishing town south of Lecce in a picturesque the bay The ancient port on this site was destroyed by the Turks in the 15th century. The fortress here was built at the end of the 15th century. Small church The 10th century San Pietro has a Byzantine dome and ancient frescoes. Cathedral The Blessed Virgin of the 11th century has a unique mosaic under, beautiful columns and ancient crypt.

Lecce on a map of Italy