Kutna Hora – a small town in Central Bohemia, located east of Prague. The article contains a detailed description of the city and Information about the main sights of Kutna Hora.

Kutna Hora is a small town in the Czech Republic located in Central Bohemian region about 60 km east of Prague, beautiful, old with many famous sights, the center which is listed as a UNESCO World Heritage Site. The main sights of Kutna Hora: the Cathedral of St.. Barbarians, Kostnitsa, the Stone Fountain are known not only in the Czech Republic, but throughout the world. The big plus of the city is that it is located near from Prague and get yourself is not difficult.

The history of Kutna Hora begins in the 13th century. In the Middle Ages silver was mined here. Due to this almost until the 16th century Kutna Hora was one of the richest cities in the Czech Republic. This went on until until the silver mines are depleted. The heyday of the city has changed decay, leaving a rich heritage – beautiful architecture and interesting sights. Now Kutna Hora – very a popular tourist center, which is definitely worth it visit. How to get to Kutna Hora from Prague

Most tourists combine a visit to Kutna Hora with a visit Prague, so here will be described how to get from the Czech the capital by train and bus. If you have a car, then the road before Kutna Hora it does not take a lot of time and effort. 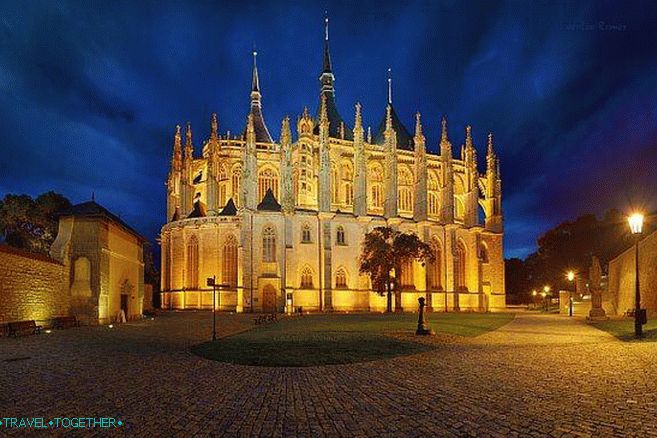 Probably the most convenient transport to Kutna Hora. Trains to this cities go often enough (every 1-2 hours). Travel time around hours Trains depart from Prague’s main railway station. (Hlavní nádraží). Getting to it is also not difficult (see map 1): metro – line C, Hlavní nádraží, tram – 5 9 26 55 58, Hlavní nádraží. Check train schedules here. – http://jizdnirady.idnes.cz/vlakyautobusymhdvse/spojeni/. Tickets better to buy immediately in both directions (back and forth), preferably without transplants. You can exit at the station Kutna Hora Hlavny Nadrazi. From the main station of Kutna Hora buses (for example, numbers 1, 4), taking you to the main attractions.

You can get to Kutna Hora by bus, which departs from the Florenc bus station. Get to her possible on: subway – lines B, C, Florenc, tram – 3, 8, 52, Florenc. 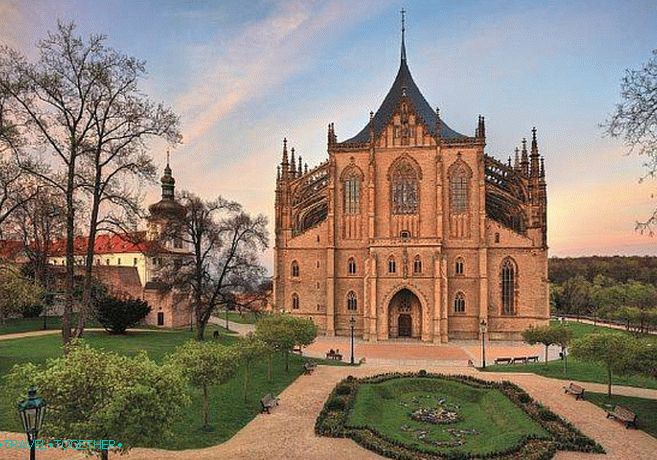 The Cathedral of Saint Barbara was built as a large representative the building was initiated by the rich inhabitants of the town of Kutna Hora. WITH architectural point of view this is the gothic basilica cathedral type The cathedral began to be built in 1338. Construction of the cathedral lasted almost two centuries and was closely associated with prosperity silver mines. In the first half of the 17th century, the church was transferred to the Jesuits. At about the same time, the building suffered from a fire. After it, the cathedral received a roof in the Baroque style. At the end of the 19th century the cathedral was reconstructed. The roof again became gothic.

The first designer and builder of the Cathedral of St. Barbara became Jan Parler, son of Peter Parler. In the interior of the cathedral to our time preserved late Gothic frescoes with a mining theme. The facade of the building is decorated with sculptures, images of fauna and flora, satirical figures, demons and mythical creatures.

Vlašský dvůr Castle (Vlašský dvůr) – castle in the city Kutná Hora, founded in 1300 by King Vaclav II. Main the destination is the central royal mint. At the turn of 14-15 centuries was rebuilt by Vaclav IV into a two-story palace with a tower and a chapel. In the 19th century it was rebuilt in neo-gothic style. 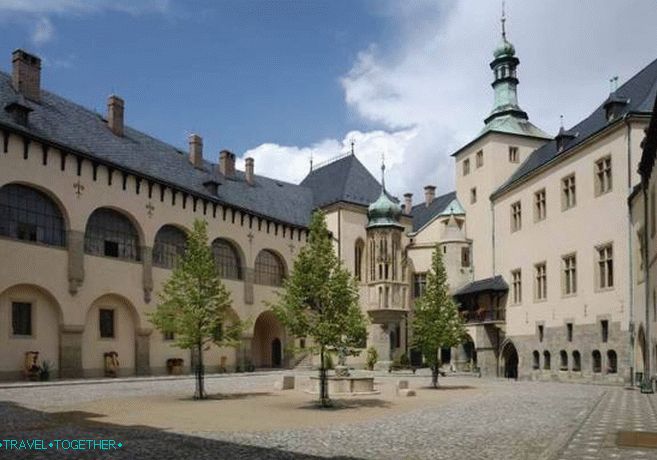 Stone House (Kamenný dům) – an old building Kutna Hora. It was built at the turn of 14-15 centuries for large getters silver. Now here is one of the expositions Czech Museum of Silver. Stone fountain (Kamenná kašna) – massive stone fountain in a small square. Built by Matěj Rejsek at the end of 15 century. One of the symbols of the city. 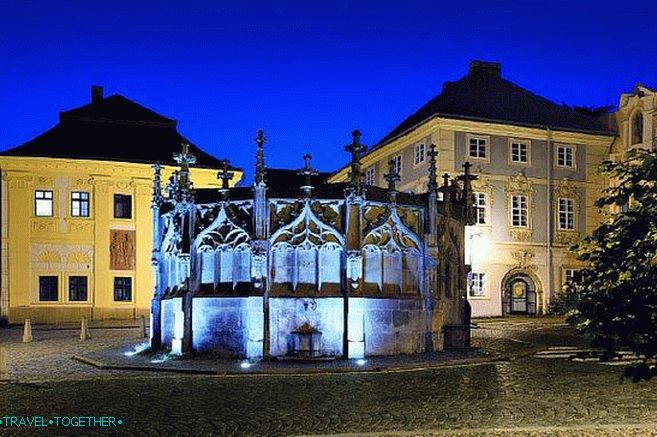 Chapel of All Saints or Kostnice (Kostnice v Sedlci) – the main attraction of Kutna Hora, a unique gothic The church, whose interior is decorated with human skulls and bones. Chapel All Saints or Kostnitsa

It is estimated that the design of the chapel took about 40 thousand. skeletons. The history of the church begins when the abbot Cistercian monastery in Sedlec Heinrich brought a little land from Calvary and scattered it over the abbey cemetery. It made the graveyard popular burial site. As a result of wars, epidemics, the cemetery is heavily has grown. 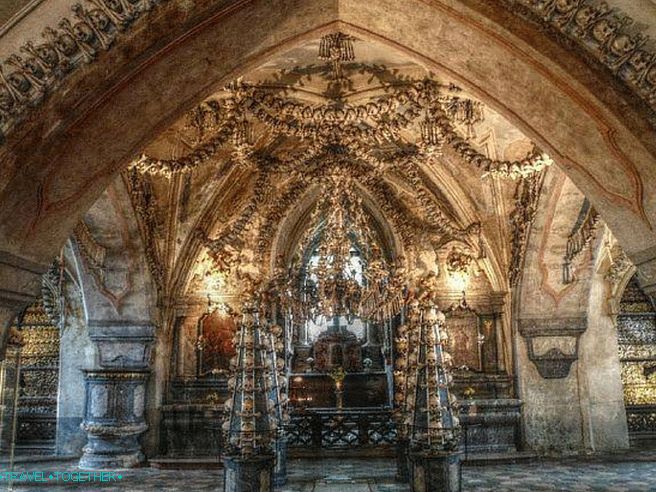 Around the year 1400, a Gothic cathedral was built in the center of the cemetery. with a chapel. The ossuary was supposed to serve as a warehouse of bones, extracted from the graves, because the place in the cemetery was not enough. In 1784, the emperor ordered the closure of the monastery. Chapel and The monastery lands were bought by the Schwarzenberg family. They hired a carver on the wood of František Rint so that he put in order a pile of stacked bones. The result was the creation unique, albeit a little frightening, interior.

Castle Hrádek (Hrad Hrádek) – a small Gothic Castle. Built in the early 15th century on the site of an old wooden Fortress Wenceslas. It was damaged during the Hussite Wars. In the 17th century In its walls were Jesuit seminary and school. Here now Czech Museum of Silver. Church of sv. Jacob (kostel sv. Jakuba) – Gothic Church of the second half of the 14th century. In the Renaissance acquired some features of baroque. 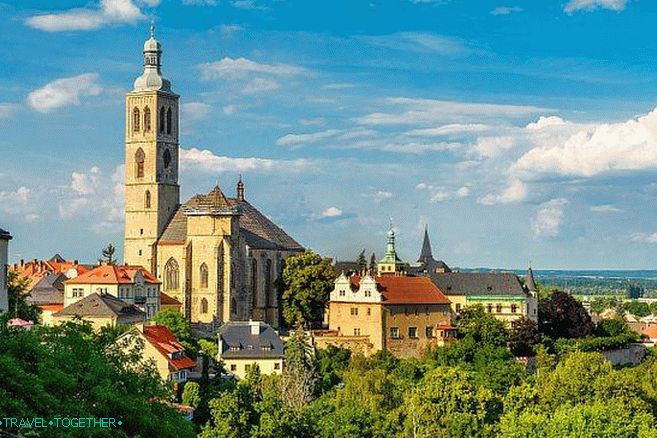 Church of the Assumption of the Virgin Mary (Chrám Nanebevzetí Panny Marie) – Gothic Cathedral in the area of ​​Kutna Hora in the Assumption Monastery Blessed Virgin Mary and St. John the Baptist. First gothic the cathedral on this site was built at the beginning of the 14th century. After the Hussite Wars monastery and the church fell into disrepair. Restored early in 18 century baroque. 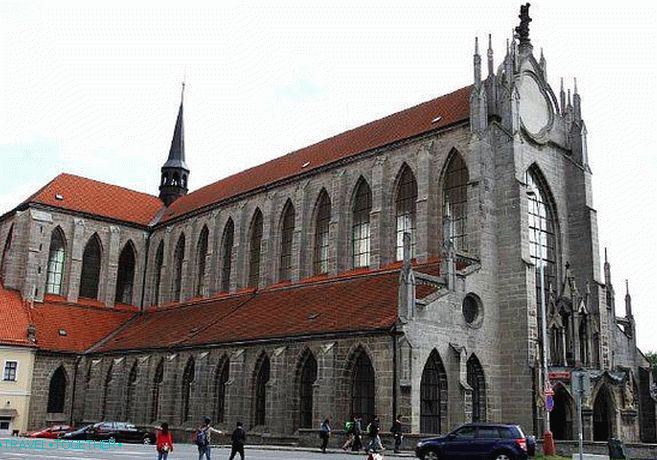 Temple the ascension of the virgin mary

Plague (Mariana) pillar (mariánský sloup) – column in the city Kutna Hora, built in gratitude from ridding the city of the plague. The pedestal of the column is decorated with statues of miners and of sv. Jacob Kutna Hora on the map of the Czech Republic