Jindrichuv Gradec is a small town in the south of the Czech Republic. Situated on Nezharka River in the beautiful countryside of South Bohemian Region at 43 km from Ceske Budejovice. Jindrichuv Hradec – a quiet old town Southern Bohemia with a wonderful atmosphere and some interesting sights. The old town has kept the medieval charm and is a historical monument. Interesting geographical feature – 15 passes through Jindřichувv Gradec meridian.

Jindrichuv Gradec is located in the south of the country on the border of two historical regions – Bohemia and Moravia. It flows through the city Nezharka River. Located near the border with Austria. Climate – moderate. The summer is warm, the winter is quite mild. In the early Middle Ages on the site of Jindrichuv Hradec existed Slavic settlement. At the end of the 12th century, Jindřich from the Vítković family He built a castle over the Nezharka River on a rocky spur. Castle was named Gradec, and his descendants later began to call themselves gentlemen from Hradec. The influence of this kind in South Bohemia was so great that King Premysl Otakar II had to lay in counterbalance České Budějovice. The first mention of the city dates back to 1220. At that time The Romanesque fortress was rebuilt into a Gothic castle. Yindrichuv Hradec safely survived the Hussite wars and other conflicts. Vitkovichi owned the city until 1604. From beginning to end 17 century Jindrichuv Hradec belonged to the Slavat family. Interesting that after the Thirty Years War, he was the second largest population of the Czech Republic after Prague.

The last owners of the castle were representatives of the genus Cherninov Khudenits. Under them, the city fell into disrepair. And the castle was actually abandoned. From the destruction of his saved large-scale restoration in 20 century.

Jindrichuv Hradec is located near the capital of South Bohemia – České Budějovice. There is a regular bus service between these cities. message. The nearest major airports are located in Prague and Austrian Linz. Between Prague, Linz and České Budějovice regular train and bus service.

In the old town there are several restaurants with delicious and inexpensive Czech cuisine and great beer. 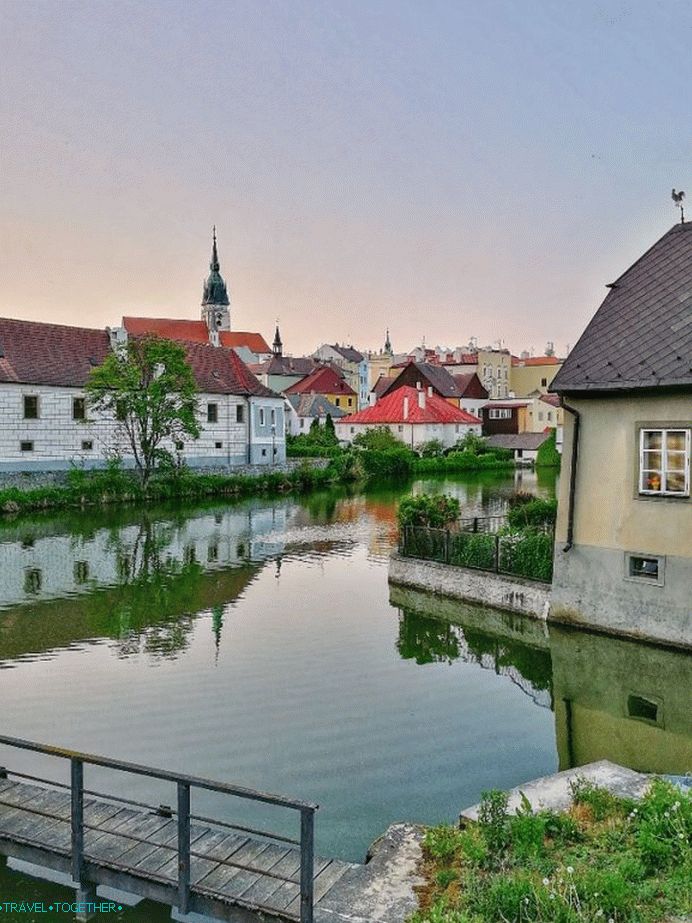 Castle of the same name – the main attraction Jindrichuv Hradec and national monument. It is medieval The building was founded in the 12th century. The castle stands on a cliff above the river Nezharka and is the third largest in the Czech Republic. It includes more 300 rooms and has a territory of 3.5 hectares. Castle carefully restored after almost complete decline in the 18-19 centuries and is open to visitors. 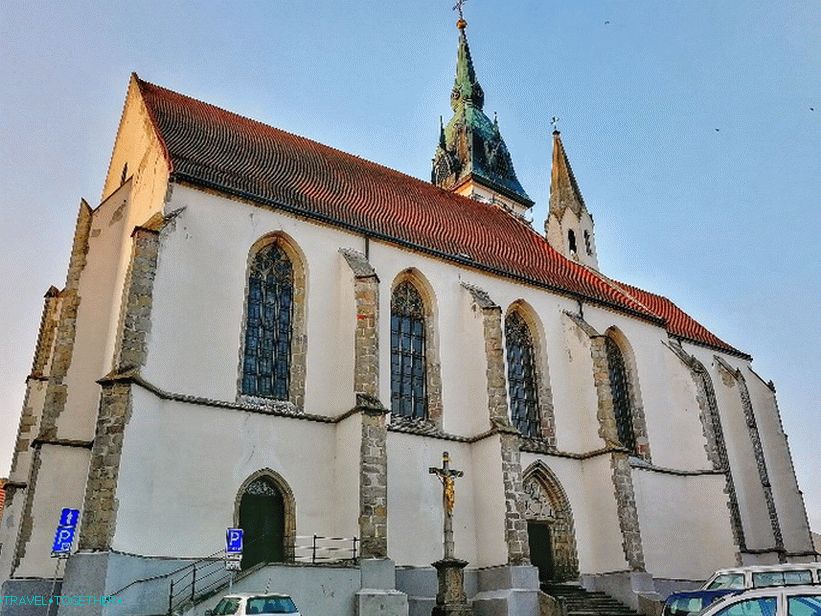 Church of the Assumption of the Blessed Virgin Mary

Church of the Assumption of the Blessed Virgin Mary – Gothic church, built in the first half of the 14th century. Here are the remains of St.. Hippolyte – the patron of the city. Also here are the lords of Hradec and members of the Slavat clan 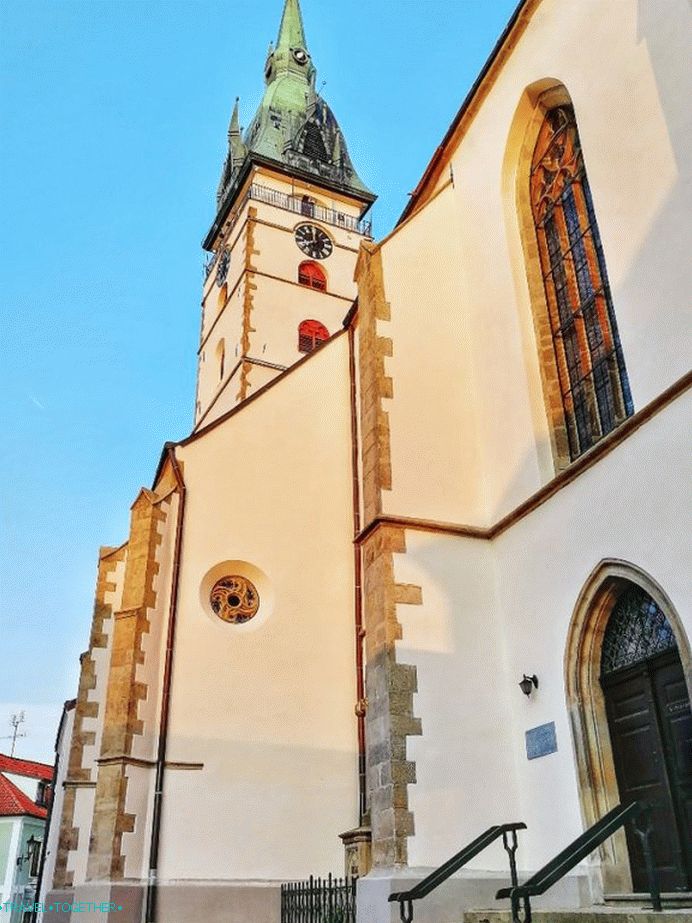 The most interesting architectural feature is high gothic tower. It has a height of almost 70 meters and was built in the 14th century. To get to the observation deck you need to overcome 153 steps. The tower was damaged by fire in 1801. Interesting, that the 15th meridian runs right around the corner of the church. 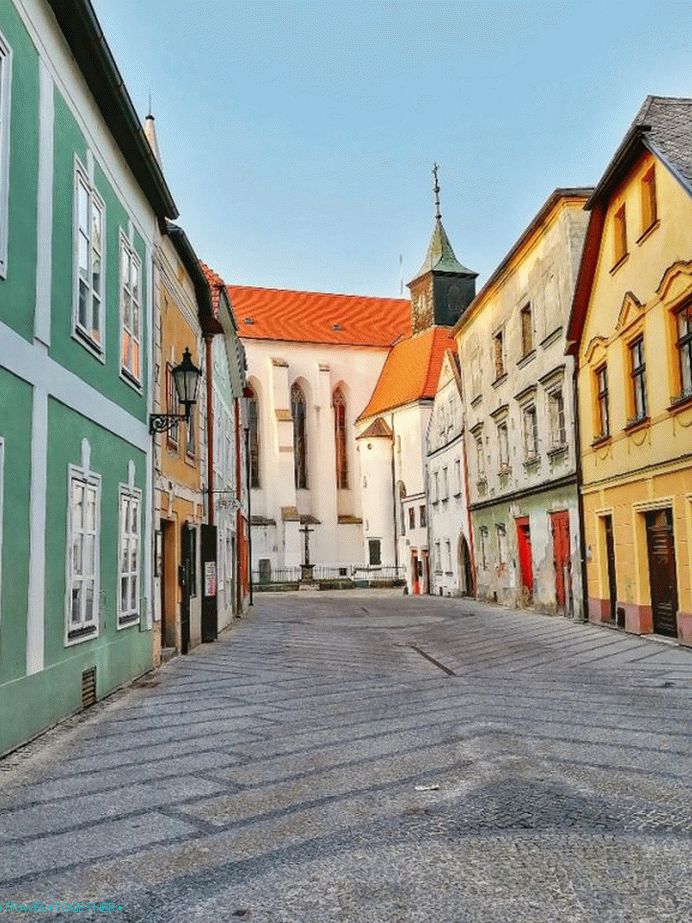 Church of John the Baptist

The Church of St. John the Baptist is considered to be one of the most valuable gothic monuments of South Bohemia. The church was founded in 13th century. This is one of the oldest buildings in the city.

From other sacral structures worth seeing: 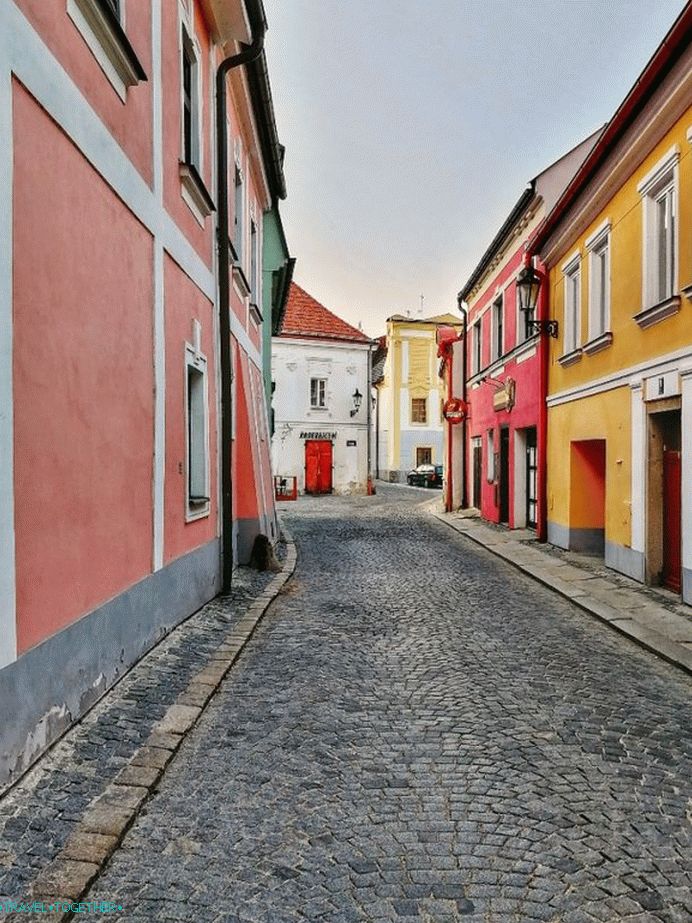 An old Jewish cemetery is located on the outskirts. Most ancient the gravestone on it dates back to the 17th century. Column of St. Trinity 18th century – the most beautiful building on Peace Square and one of the symbols of Jindrichuv Hradec. Has a height of 20 meters and decorated with beautiful baroque sculptures. In Jindrichuv Hradec there were sections of the old city fortifications and city gates. The most remarkable preserved structure of this type are the medieval Nezaretsky gate or the gate Linz

Jindrichuv Hradec on the map of the Czech Republic