Heraklion (Greece) – the most detailed information about the city with photos. The main attractions of Heraklion with a description, guides and cards.

Heraklion – a city in the south of Greece Crete. Named in honor the hero of the myths of Hercules and is located near the legendary Knossos – the center of the ancient Minoan civilization. Heraklion – The largest city and port of Crete, one of the most popular tourist destinations in Greece. Here you can explore archaeological monuments of one of the most ancient civilizations of the world – Minoan, admire the ancient Byzantine and Venetian churches, explore the powerful medieval fortifications, enjoy stunning nature of the island, clear sea and sun.

Heraklion is located in northern Crete in a small harbor. The climate is Mediterranean. Summer is warm but not as hot as in continental greece. The average temperature in July – August is 26 – 28 ° C. Winter in Heraklion is warm and pretty. rainy. The sea temperature in May is 22 ° C, peaking in July and August (25 ° C). 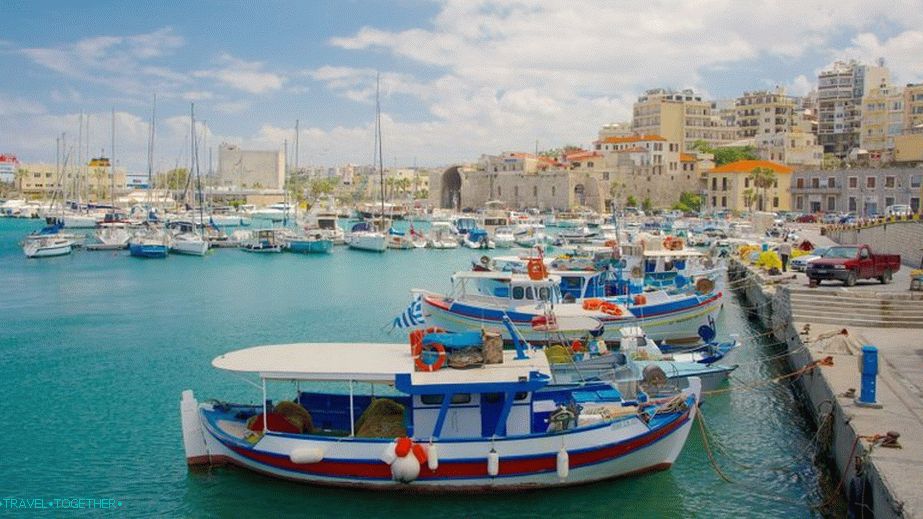 It is believed that Heraklion was founded during the reign of Minos and was the seaport of Knossos. Although some scientists suggest that the legendary king used the port of Amnis. Archaeological the finds cannot confirm the Minoan origin of the modern Heraklion, but also can not refute. 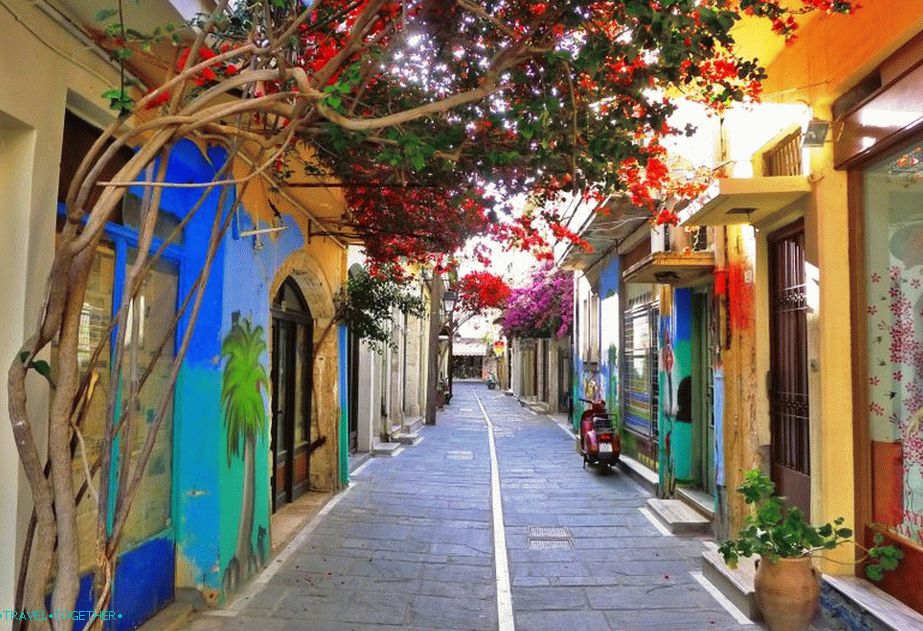 In 824, Crete was captured by the Arabs, who turned Heraklion in a powerful fortified fort. In 961 the city was conquered Byzantium. The Byzantines ruled Heraklion for almost three centuries. In 1204 year the Crusaders sold Crete to Venice. When the Venetians of Heraklion It reached its heyday and was surrounded by strong fortifications. 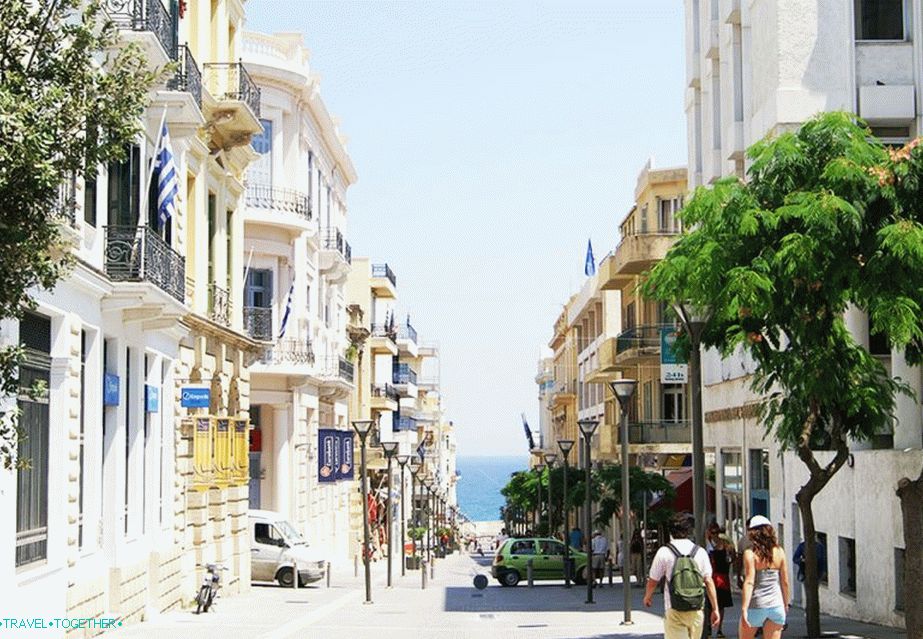 In 1669, during a long siege, the city was taken by the Turks and renamed to Khandakas. The historical name of Heraklion returned only in the 19th century. In 1898, Crete gained independence, and already in 1913 the island became part of Greece.

Heraklion’s largest airport is located in Crete. From April to early November (in the holiday season) you can get here from many major cities of Europe. Ferries connect the city with Athens, Thessaloniki, Santorini. 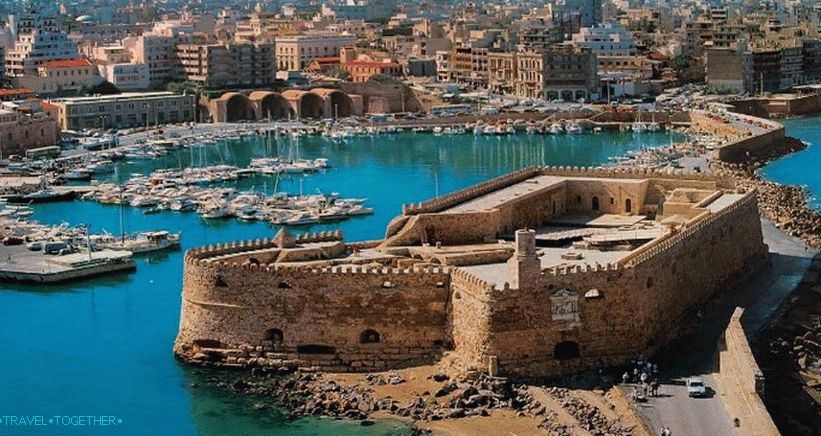 Castello a mare or koules

Heraklion grew up along the coastline and still its old town surrounds a small harbor. The historic center is protected by a chain. massive defensive walls (built by the Venetians), which were partially demolished. Inside are pedestrian streets with old buildings, churches, cafes and shops. One of the most famous sights of the old city is Castello a Mare or Koules. This is an impressive Venetian fortress. 16th century. On its walls you can climb and see the arsenals, extensive arches with arches, where the Venetians repaired their ships, and the lively quay of Heraklion. 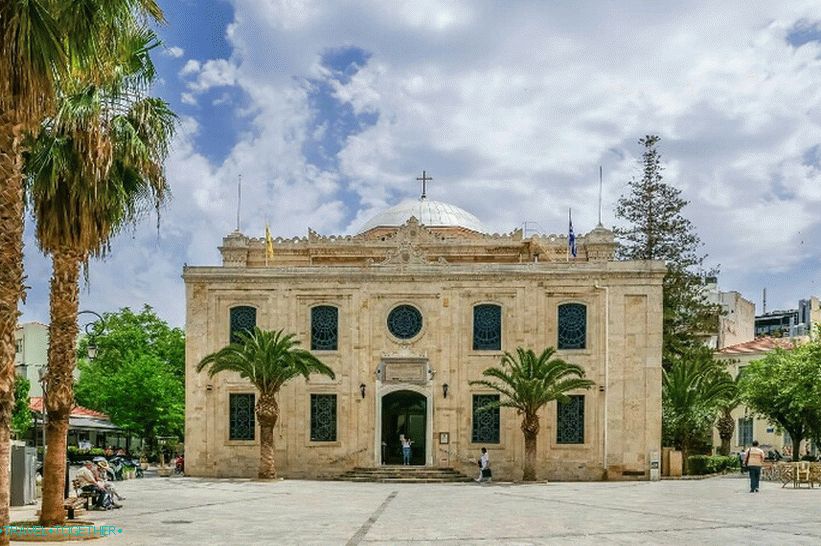 Church of sv. Tita is one of the most important Byzantine monuments in Heraklion. It was founded in 961 after the expulsion Arabs. For centuries this building was one of the symbols Heraklion. In the Ottoman period the church was transformed into mosque. 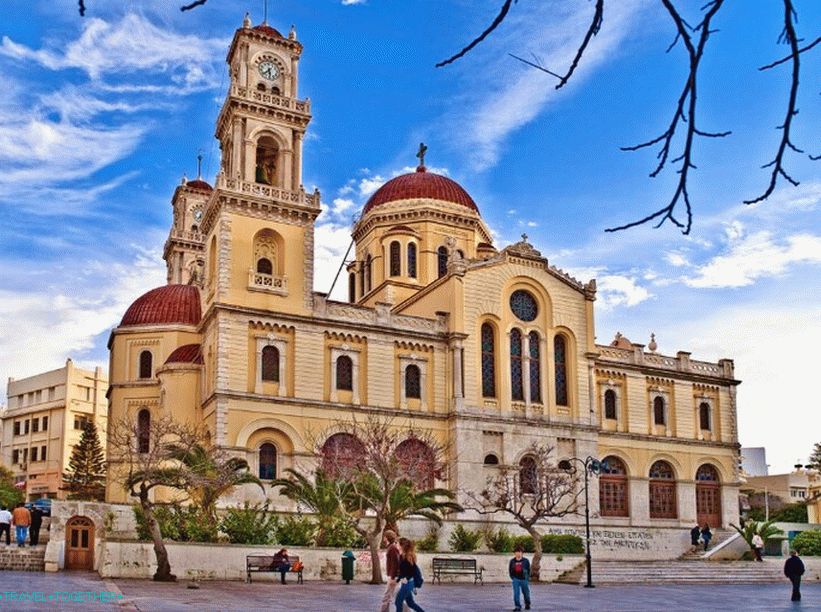 Cathedral of sv. Minos – the largest church of Heraklion, built in the late 19th century and dedicated to the patron saint of the city. it impressive three-nave basilica with a dome and two bell towers. 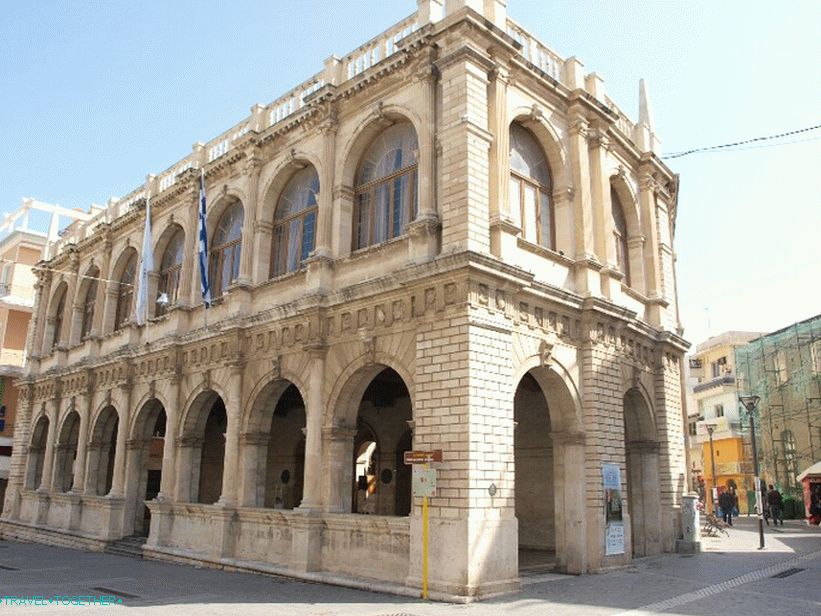 The central avenue of the historical center of Heraklion is street August 25th. It is surrounded by beautiful neoclassical buildings. and connects the harbor and the area of ​​Lviv. The street got its name in the memory of the tragic events of August 25, 1898, when the Turks executed hundreds of Christians.

One of the most beautiful historical buildings of the street is Venetian lodge. The original building was built in 1628. The modern lodge is a restored 20th century building. On the north the wall is the Venetian Sagredo fountain, built at the beginning 17th century. 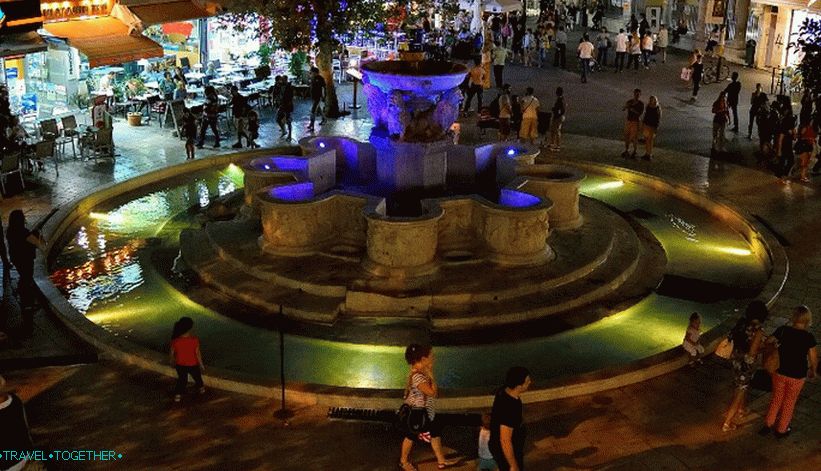 Fountain Lions – the most beautiful Venetian fountain located in the center of the eponymous square and built by Morosini in 1628. The source of the fountain was a giant aqueduct, located 15 km from Heraklion. Opposite the fountain is the old Basilica of St.. Mark, built by the Venetians in the year 1303. In 1669 the Turks transformed the church into a mosque. 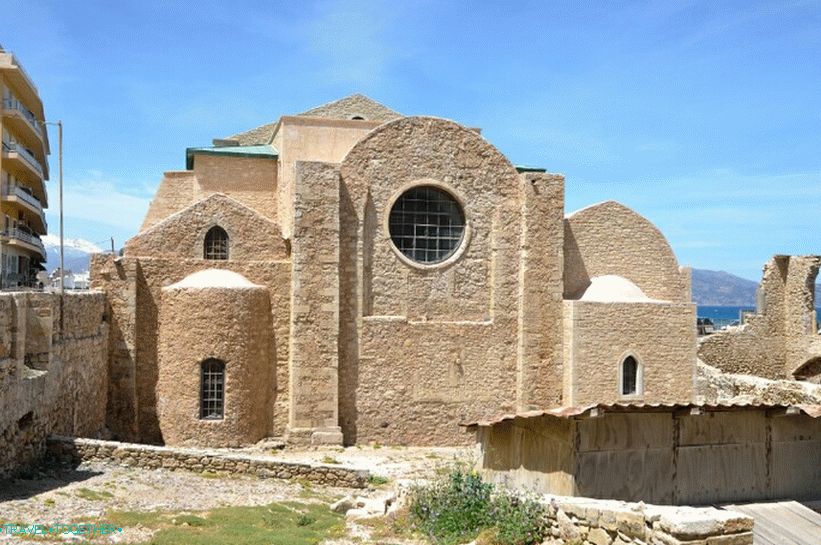 Church of sv. Peter and Paul

The Church of the Holy Apostles Peter and Paul is one of the oldest Cistercian churches in Europe, built in the 12th century in the early years the domination of Venice. Chapels on the south side of the church served tombs In one of them, unique murals have been preserved. 15 century. 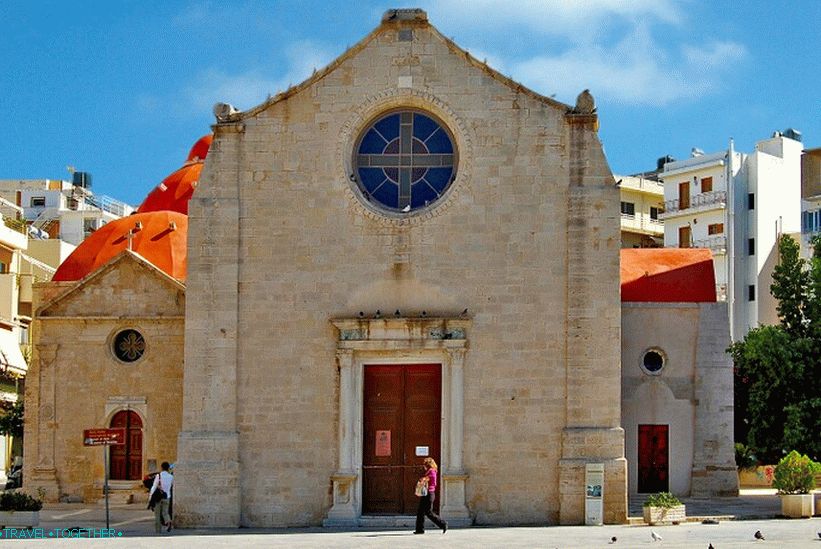 Church of sv. Catherine – a small stone Venetian church 16th century, located on the eponymous square. In the 10th century on this the place was founded a Byzantine monastery. Now in the walls of the church the theological museum is located. 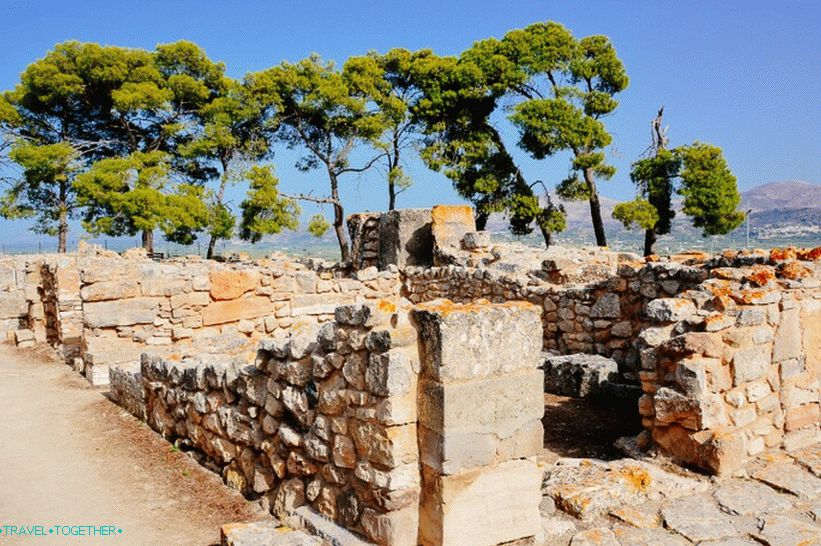 Palace of Festa – the ruins of an ancient palace built in Minoan period. This building had an area of ​​about 9,000 km and was inferior in size and grandeur only the palace of Knossos. Phaistos Palace was destroyed by an earthquake in the 15th century and discovered at the beginning of the 20th century. Located 70 km from Heraklion. 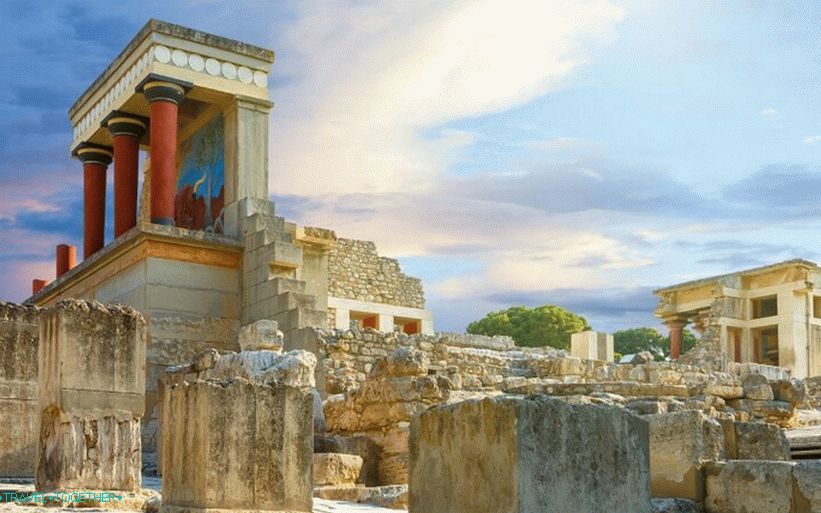 Knossos Palace – the most famous landmark Crete and one of the most important archaeological sites in Europe. it the legendary center of the Minoan civilization, built by King Minos in the second millennium BC The palace complex had an area of ​​about 22,000 square meters and is the largest structure on Crete.

The palace is located just 5 km south of Heraklion on a hill. Kefala in the center of ancient Knossos was the main residence Minos This structure appears in the myths of Dedalus and Icarus, Perseus and the Minotaur. The Palace of Knossos was discovered in 1878. Now is an impressive ruin with colorful frescoes. 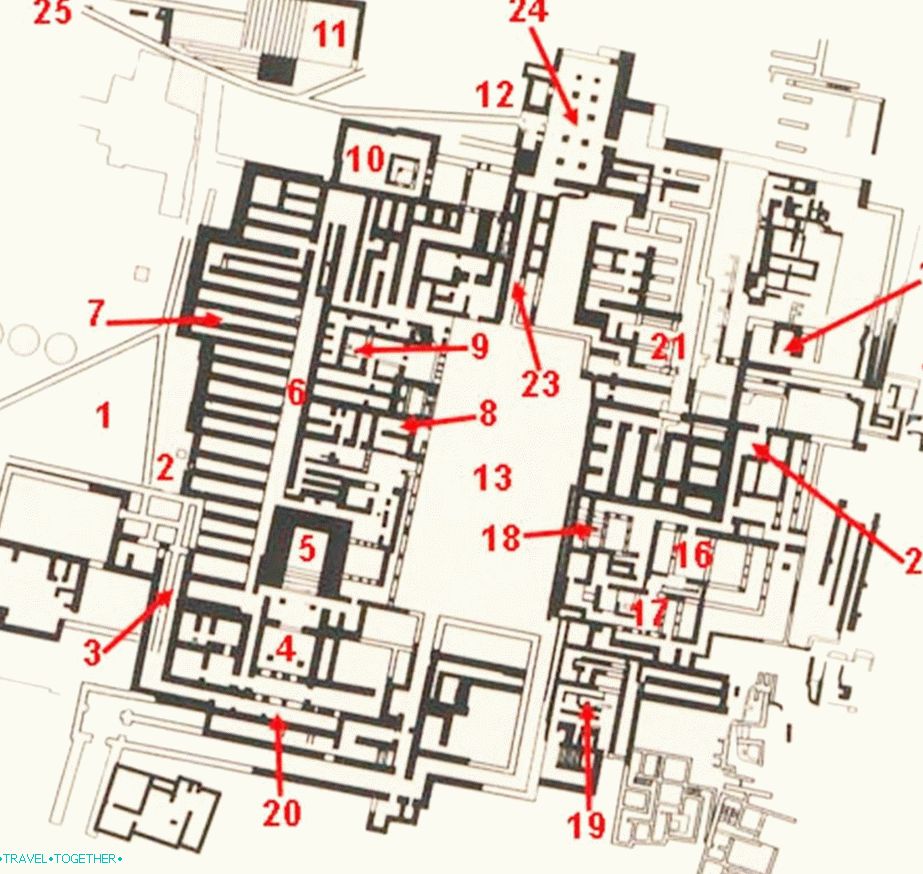 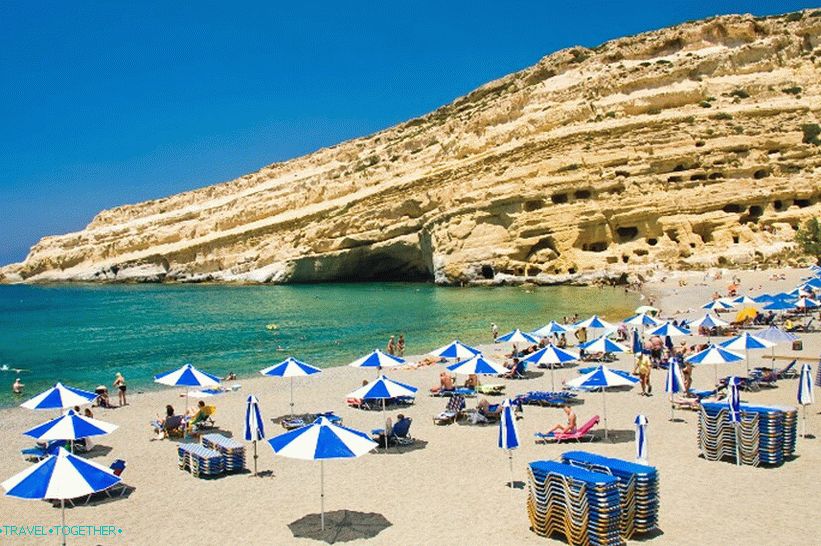 Heraklion on a map of Greece