Grenoble (France) – the most detailed information about the city with photos. The main attractions of Grenoble with a description, guides and cards.

Grenoble is a city in southeastern France in the department of Isere. it a major industrial and educational center, as well as the capital Dauphine’s historic area. Grenoble is an ancient city that more than 2000 years. It enchants with its stunning architecture and magnificent historical character. The city is located in the valley the foot of the Alps and is one of the most picturesque places of France, surrounded by snow-capped peaks and green forests. Also grenoble boasts a beautiful historic center with typical old european streets and an impressive amount museums.

Grenoble is located in the Iser Valley at the foot of the French Alp. The city is located near the border with Italy between Lyon and Turin. The climate is temperate with warm summers (which is on average slightly cooler than in central France) and in cool winters. About 1000 mm of precipitation falls here during the year, which is distributed evenly throughout the year. The first mention of Grenoble dates back to 1 century BC. AT this time here was founded fortified settlement of Celtic Allobrog tribe Kularo, which was later subordinated by the Romans. In the 3rd century around a small Roman town was built a fortress. In 380, the city received the name Grazianopol. At the end of the 4th century began the spread of Christianity in Grenoble Diocese was founded.

After the collapse of the Roman Empire, the city became part of Burgundy, and then until the 10th century was part of the kingdom of Arles. In 1032 Grenoble became part of the Holy Roman Empire. In the 11th century in the period reign of the Counts of Albon the city grew considerably and became the capital Dauphine County. In 1339 a university was founded here. In 1349 the year the Dauphine’s lands were sold to France, and Grenoble became the frontier city ​​with the Duchy of Savoy. As part of France, Grenoble was an important strategic city, in which the French troops were stationed. In the 19th century industrialization has turned it into one of the most important industrial centers of the south-eastern part of the country. Grenoble’s Old Town (Vieille Ville) is a delightful area narrow cobblestone streets, small nice squares and beautiful old buildings. Old Episcopal Palace (in which now there is a museum de l’Ancien Évêché) located on the remains ancient roman shafts. In the medieval square aux Herbes is still pore markets are held. And the palace of justice of the 15th century amazes façade in the style of bright gothic and early renaissance.

Grenoble Museum is one of the most prestigious art museums. France, which has an amazing collection of paintings from Medieval to modern times. Here are the masterpieces of 15 – 20 century, including the work of Rubens, Gauguin, Picasso, Monet and many others. Fort de la Bastille – a hilltop fortress with an impressive the height of which offers a stunning panoramic view of the alpine landscape. Once there was a prison, and now the military museum and center contemporary art. Grenett – the main town square of Grenoble, surrounded by quaint historical houses, which are now located cafes and shops. In the 17th century, this space was used for Hay and grain trade. In the center of the square is an elegant fountain. with winged cherubs and dolphins. Lesdigier’s mansion is a historic building of the 17th century, which located on the border of the old city. The mansion has an elegant a garden which is a public park and a popular place recreation. Port de France – a historical monument of the 17th century, which is now is a memorial to the fallen wars.

Perret – 84-meter concrete tower, which was built in 1924 and is the first such design in Europe. Notre Dame – a medieval church built on ruins Gallo-Roman settlement Cularo. The current building dates from 13 century, has an interesting Romanesque bell tower, bright Gothic elements of the choir and wooden bas-reliefs of the 17th century. Nearby is Episcopal Palace, which houses a museum with artifacts the ancient past of the city.

Fountain of the “Three estates” 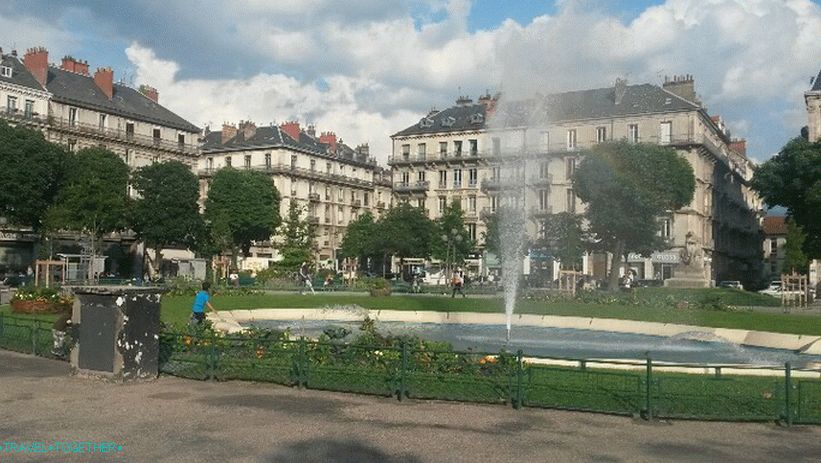 Victor Hugo Square – an elegant urban space, built in the 19th century on the site of the old bastions and military the barracks.

Saint-André is a beautiful collegiate church of the 13th century in Lombard style. Church of sv. Bruno – Neo-Romanesque church of artificial stone in the western part of the city, built in the 19th century.

The island tower is a 14th century medieval building in which used to be an arsenal. Saint Louis is a baroque church, completed in 1699. Sacre-Coeur – beautiful basilica, built in the style of the famous churches on the hill of montmartre in paris.

Grenoble on a map of France