Granada (Spain) – the most detailed information about the city with photos. The main attractions of Granada with a description, guides and cards.

Granada – a city in the south of Spain, the capital of the same name provinces. This is one of the oldest cities in the country, located in Eastern Andalusia at the foot of the Sierra Nevada Mountains. Granada is the former capital of the Moorish kingdom and one of the last Arabs strongholds on the territory of the Iberian Peninsula. therefore The heritage of the Moorish period can be found almost on every corner, and the city itself has a special oriental charm. Granada is the soul of Andalusia. A city that combines several cultures in which presents the richest historical heritage and there will be interesting for everyone.

Granada is located at the foot of the Sierra Nevada mountain range. between two hills divided by the valley of the river darro. Sierra Nevada – one of the highest mountains of the Pyrenees and Europe. Some mountain peaks have a height of more than 3 km. On the slopes there are ski trails. Granada is located 433 km from Madrid, 454 km from Cadiz, 128 km from Malaga and 251 km from Seville. 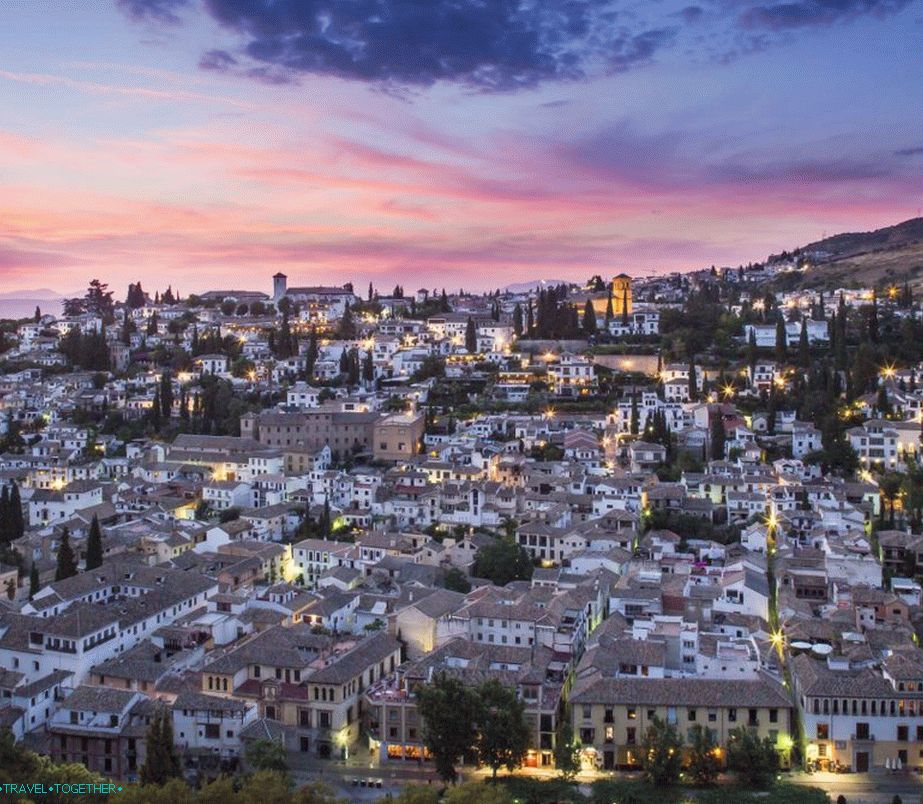 The region offers a great variety of climate and landscapes: from alpine vegetation of the Sierra Nevada to the tropical coast. Perhaps such natural contrasts are no longer found in all Iberian Peninsula. Granada’s climate is transitional between Mediterranean and cold semi-arid. Summer is dry and hot, winter is cool. The average annual temperature is 14 degrees. The largest amount of precipitation is recorded in November, March and April 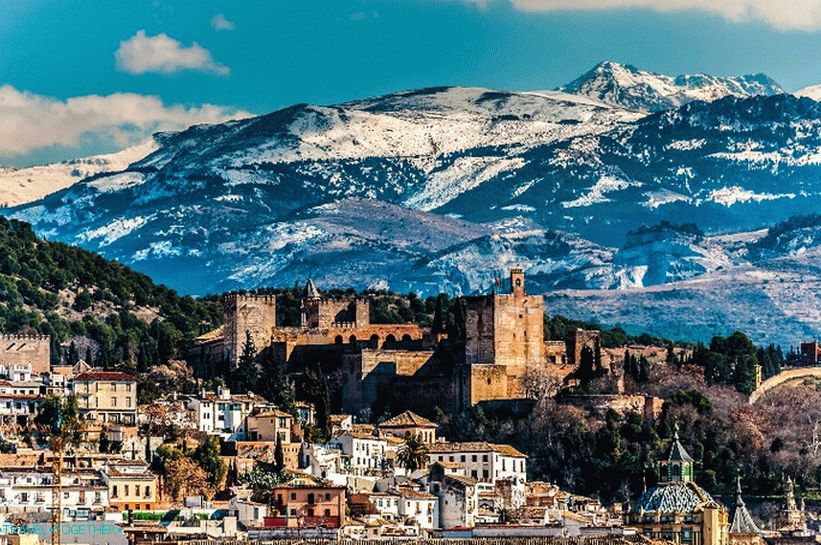 Granada can be visited all year round. But still the most comfortable time is spring and autumn. In the summer, despite the heat of the day, nights are often quite cool.

Granada is one of the oldest cities in Spain. Already in the 5th century before AD here was located the Phoenician settlement. After coming Romans in the Pyrenees here was founded the city of Iliberra, which was captured, after the fall of the Roman Empire, first by vandals, later Byzantium, and then the Visigoths.

In 711, Granada was captured by the Moors. During this period the city It was called on the Arabian style – Ilbir. In 756, the Arabs laid the new city, and the old one was called Kalat Garnath. This is the name later transformed into modern – Granada. After the fall Cordoba city became one of the most prosperous in Andalusia. 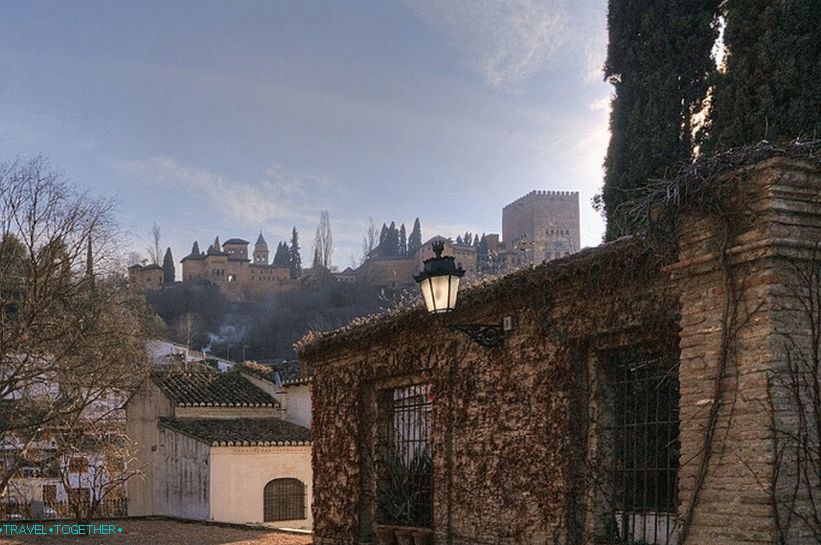 In 1492, Granada became part of the Castilian Kingdom. Interestingly, before that the city remained the last stronghold of Muslims. in the Pyrenees. In 1531 the university was founded. After conquest Granada Christians old mosques were rebuilt in the church. Also the architectural appearance of the city was changed and a part of it was destroyed historical heritage of the Moorish period. Then the city is not survived significant changes until the mid 19th century. The reason for this steel disaster and economic decline. Further The development of Granada was promoted by the industrial revolution and industrialization that stopped after the civil war in Spain and the coming to power of Franco. 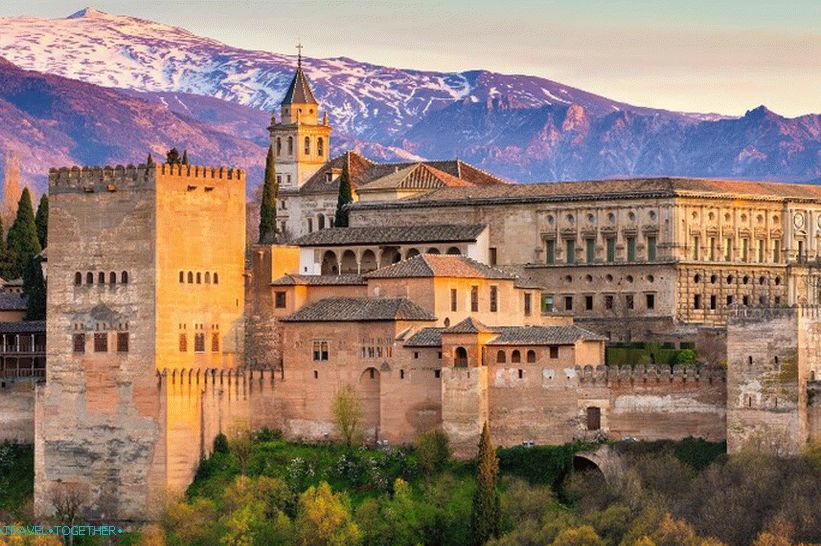 Granada has a small airport located 12 km away. west of town. Much more destinations served by the airport Malaga. Regular buses run from Seville, Málaga, Madrid and Cordoba. Also to Madrid, Barcelona and Valencia twice a day trains depart. Malaga will be a convenient point for transplant if there are no direct routes to Granada. 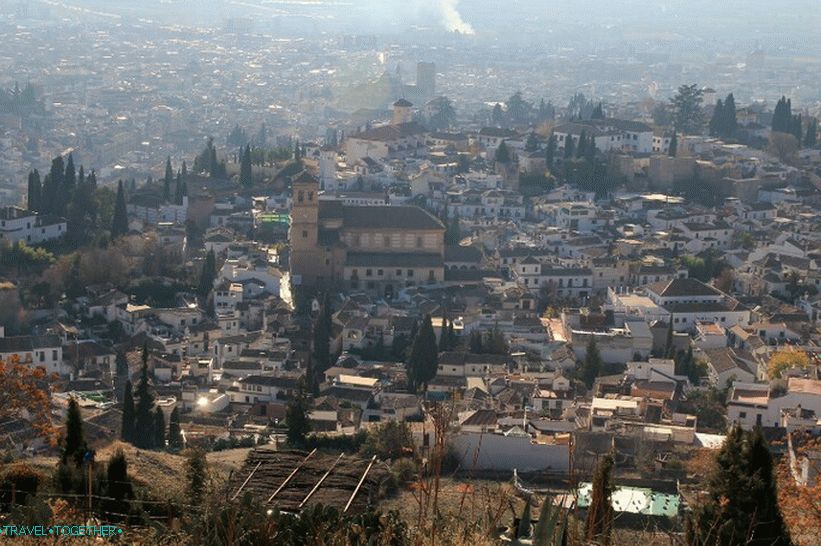 The main shopping area is Puerta Real Square and the neighboring streets. In the area of ​​Alcaiceria, south of the cathedral, you can buy souvenirs. Many souvenir shops are located on Cuesta de Gomerez on the way to the Alhambra. 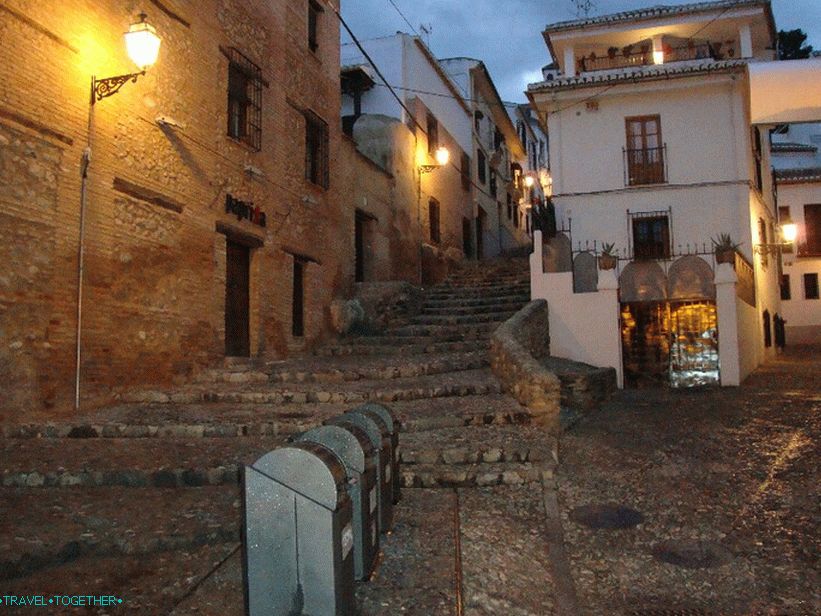 In many establishments of Granada, tapas are served free of charge from a drink. Meals can be quite inexpensive. On almost every the square or the old street has nice open restaurants and cafe with delicious food. Plenty of inexpensive places can be found at Area San Miguel Bajo.

If you want to try the local wine, then ask “un costa”. Another option is “tinto de verano” or summer wine. AT Granada brewed excellent beer – Cerveza Alhambra, which is found everywhere. Must try tea in tea rooms Moorish quarter Albaicin. 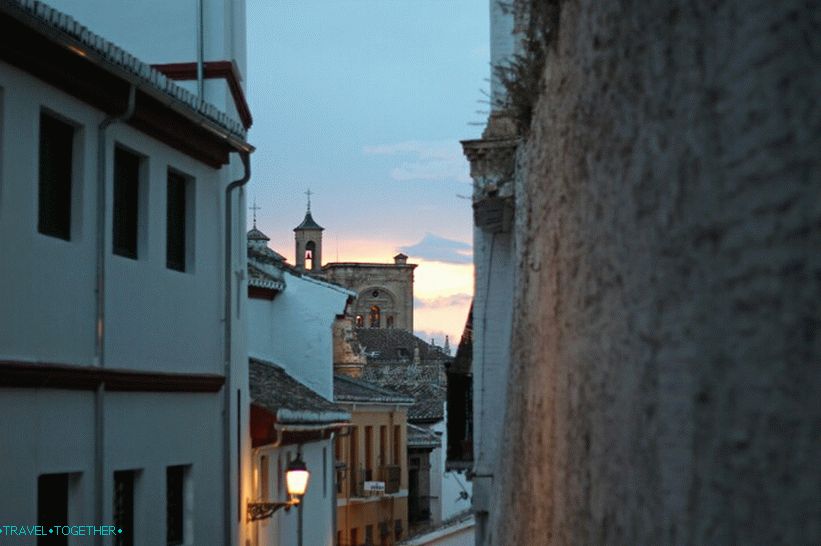 Evening on the streets of the historic center of Granada

In Granada, you can find sights that amaze its scope, history and architecture. And the main one among them is Alhambra. 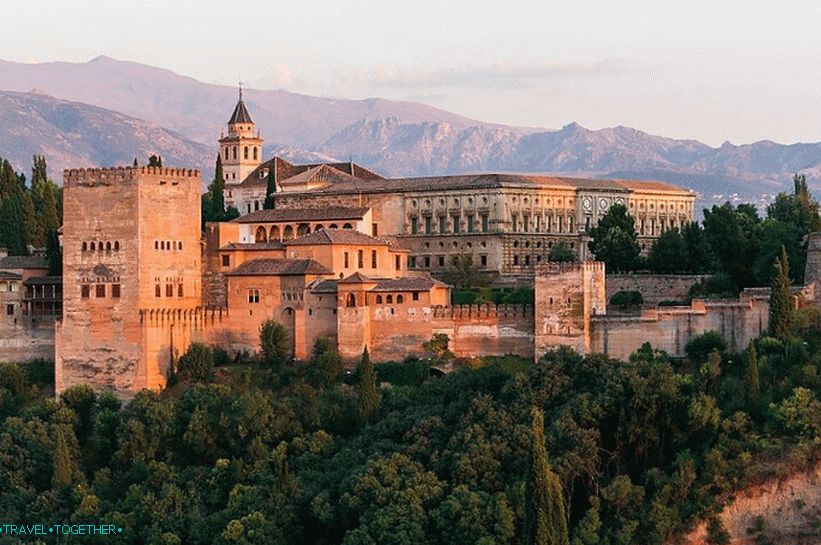 The Alhambra – the pearl and the most famous landmark Granada, a UNESCO World Heritage Site. This majestic medieval complex stands on top of a hill in the background of snow the peaks of the Sierra Nevada. Alhambra – the last Moorish fortress in Europe, which reflects the grandeur of the Moorish civilization in Andalusia and invites the visitor to look at the magnificent decorative architecture, lush gardens, beautiful fountains and breathtaking panoramas of the city.

The Alhambra was a palace, a fortress and the main residence of the dynasty. Nasrid who ruled Granada for more than two centuries. Building This huge complex dates back to the 13-14 century. 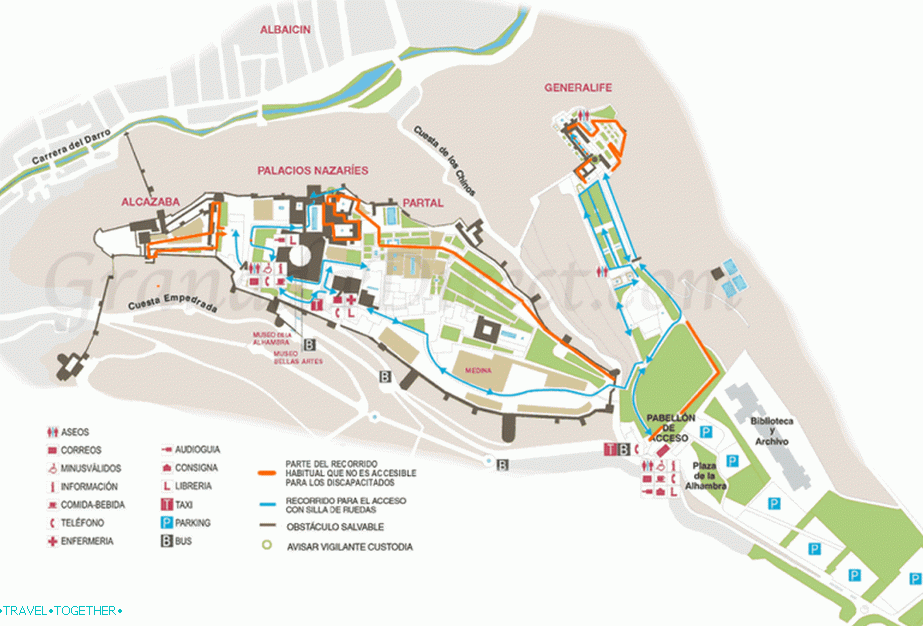 Alhambra is a vast architectural complex, which is conditionally can be divided into four groups of buildings. To fully appreciate unique architecture and scale, it is advisable to first consider complex from afar.

Alcazaba is the original 13th century Moorish fortress and The oldest building in the Alhambra. From the fortress were towers, parts walls, ramparts and fragments of outbuildings. From here it opens Excellent view of almost the entire city and the mountains of Sierra Nevada. 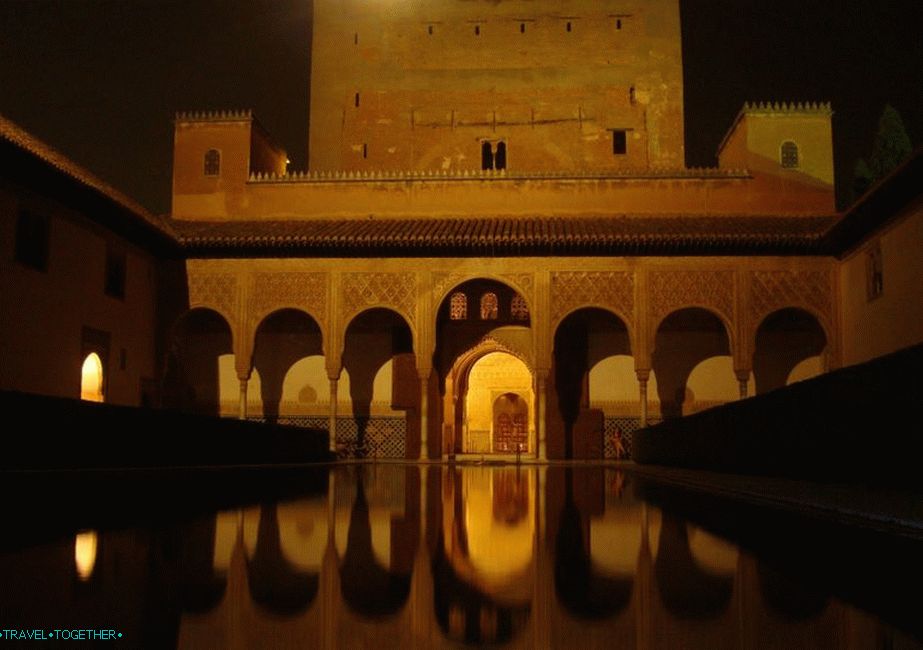 Nasrid Palaces – the most magnificent buildings of the complex, made in typical arabic architecture. Here you can see impressive arches and windows, carved wooden ceilings, intricate plastering and colorful ceramic tiles on almost every step. The rich interior of the halls and cozy courtyards amazes.

The Palace of Charles V – the sixteenth century building was introduced in commissioned after Reconquista by Charles V as royal residences. Square two-tier structure in the style a renaissance with a large circular courtyard surrounded by inner the colonnade. The building houses two museums: the Alhambra Museum and the Museum. arts. 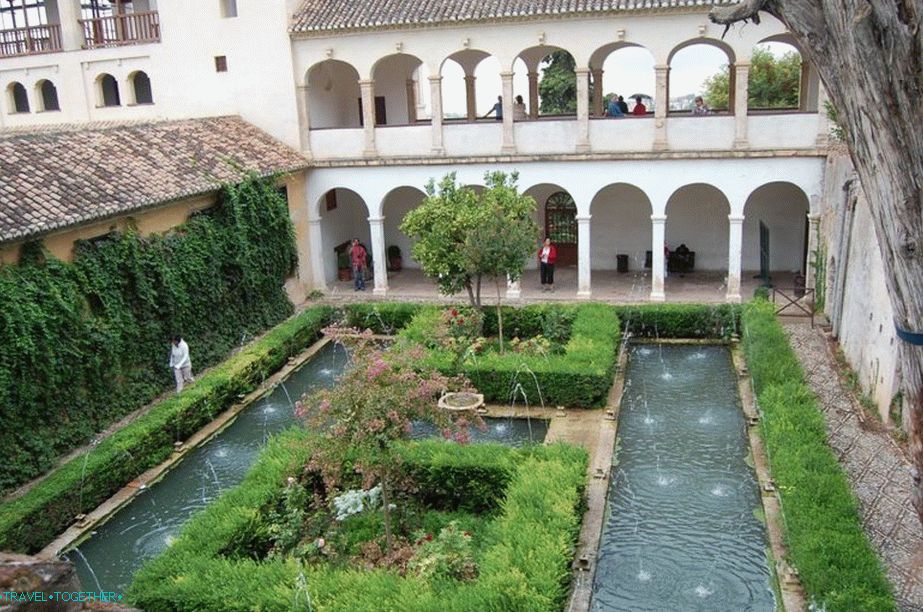 Generalife is the former country residence of the emirs of Granada. it the most beautiful complex of Moorish-style gardens in Andalusia located on a hill in the back of the complex overlooking the palace Nasrid The generalife is filled with shady patios, fountains, scents of flowers and picturesque terraces. 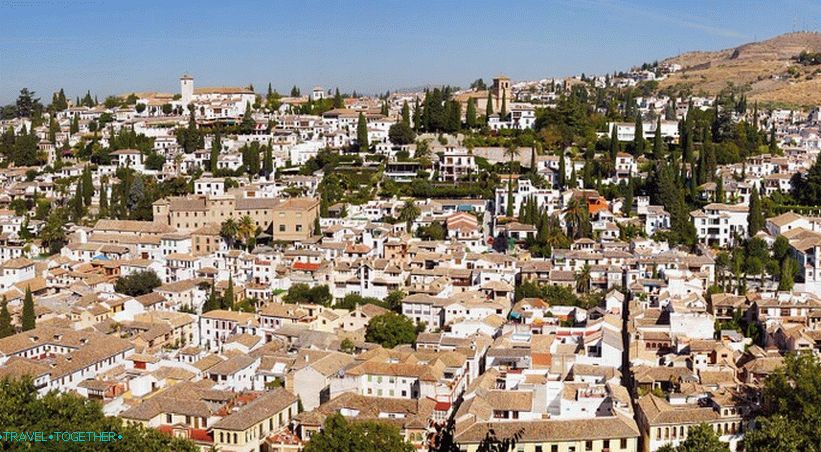 Albaicin – one of the most charming sights in Granada, the historic Arab quarter, which is an object UNESCO World Heritage Site. Among the narrow and winding streets Albajsina you can find beautiful snow-white old buildings, magnificent Arab shops and restaurants, beautiful gardens and magnificent views of Granada and the Alhambra. Quarter construction dates back to the 14th century. At that time it was surrounded by walls. In Albaisin, you can easily get lost. You will find that street layout, lots of stairs and lanes literally knocks down confusing. But there is a special charm! 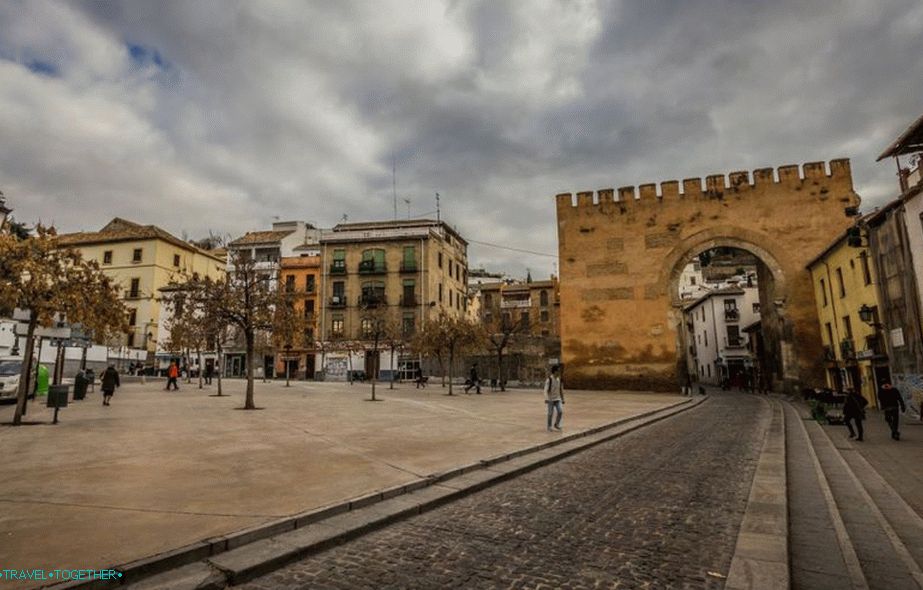 A stretch of old remains from Puerta Nueva to Puerta Monaity fortress walls. Puerta de Elvira was once the main entrance in town. Their construction dates back to the 9th century. 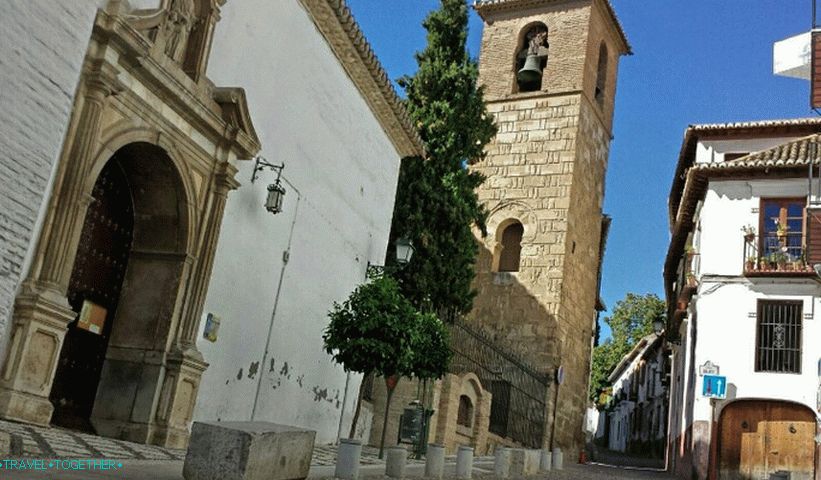 San José Church is one of the oldest churches in Granada. Built on the site of an ancient mosque of morabits. 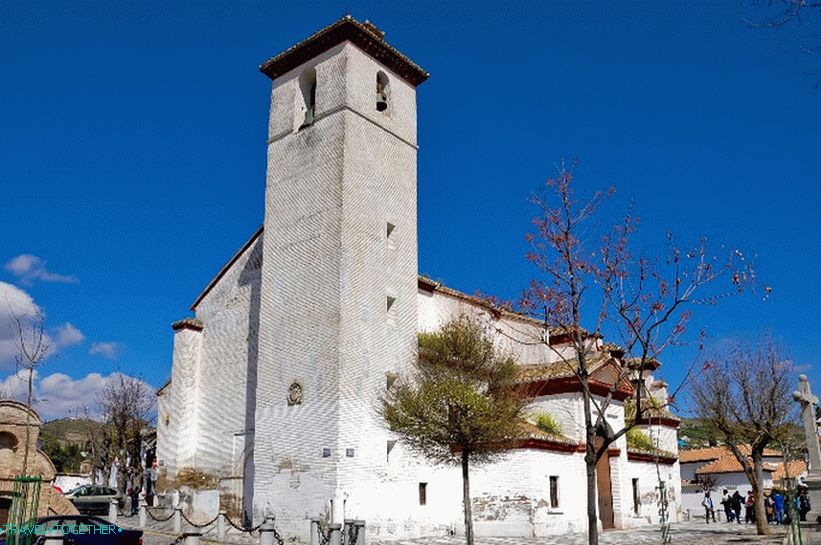 In the heart of Albaicin is San Nicolas Square. Exactly this popular tourist destination with a beautiful view to the Alhambra. On the square is located the same name church of the 16th century. Not far from the church of San Nicolas is the church San Salvador, which was built on the site of an earlier mosque and is remarkable for its Mudejar style. 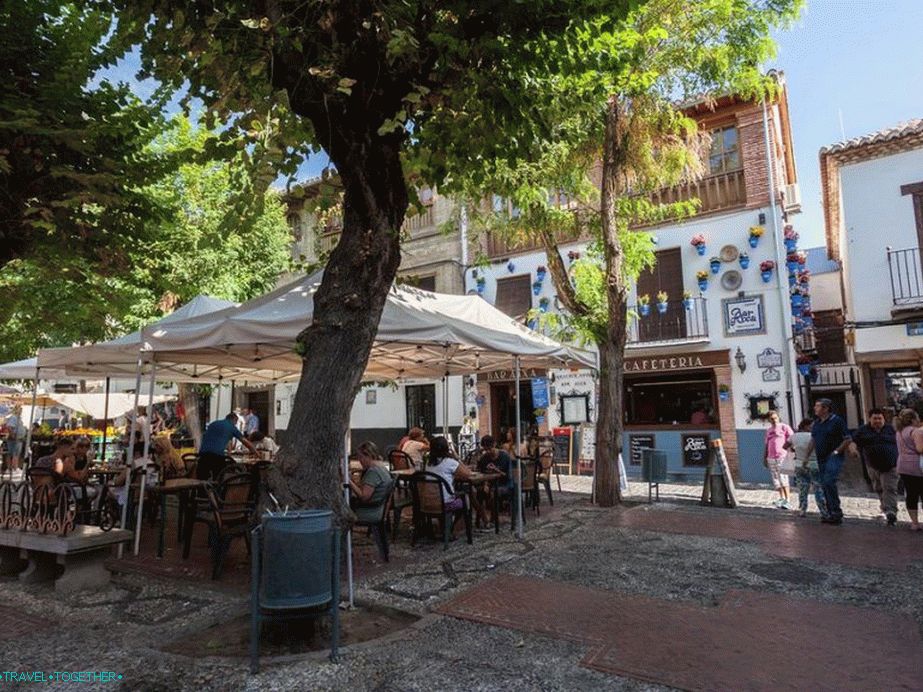 Larga Square is a small charming square in Albaicin, one of the favorite places of the inhabitants of Granada, which is located in the side from hiking trails. There are many restaurants and shops with traditional goods, and on Saturdays passes the market. 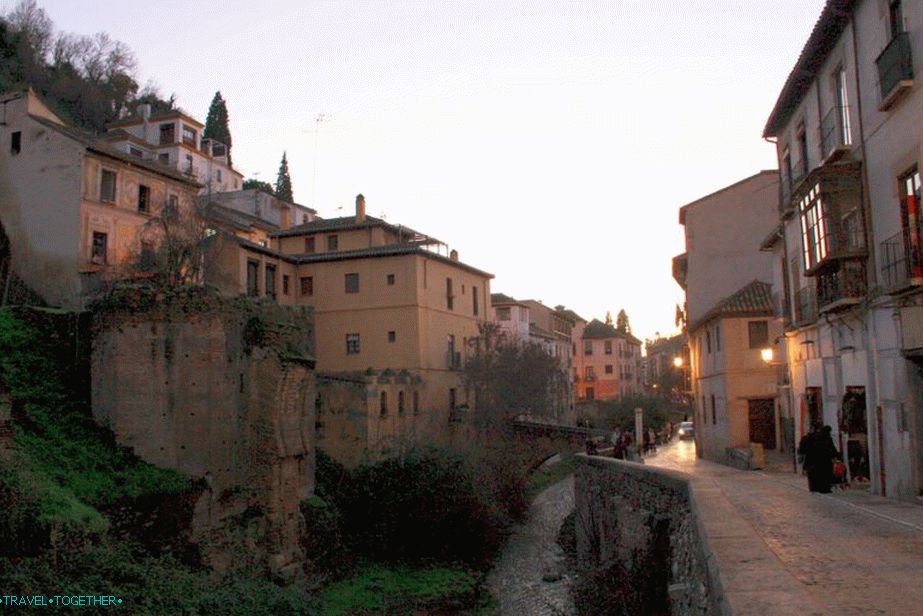 Carrera del Darro – one of the oldest and most charming Streets of the city, located at the foot of the hill. Narrow winding the street goes from the Nueva Square along the winding bed of the river Darro. This is one of the most scenic walks in Granada. Along the way you you will find well-preserved buildings, the remains of Arab houses, stone bridges and lots of good restaurants. 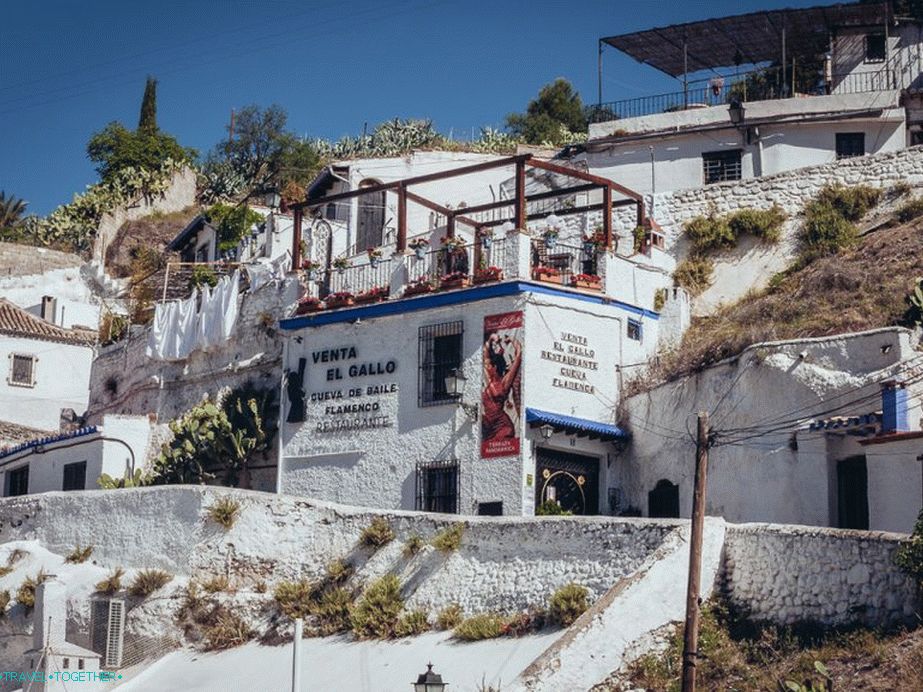 Roma quarter competes with Albaisin Sacramonte, located on a hillside. Worth a stroll through it slopes to discover old gypsy houses that decorated with bright handmade ceramics. Surroundings contain numerous cave dwellings. 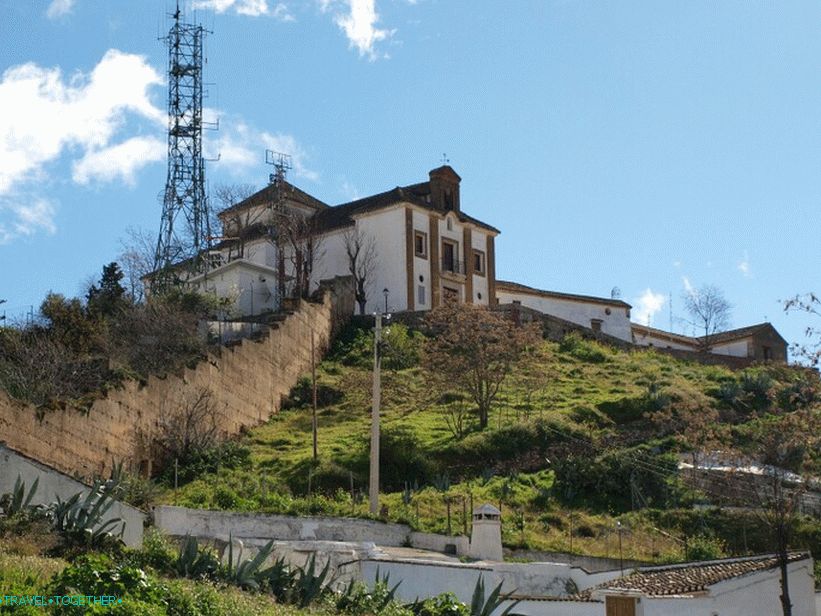 We recommend to go up to the chapel of San Miguel, from where it opens beautiful view of the city and the Alhambra. This church is built at 17 century baroque. Another remarkable religious The monument is a 17th century Benedictine abbey on a hill. Valparaiso. 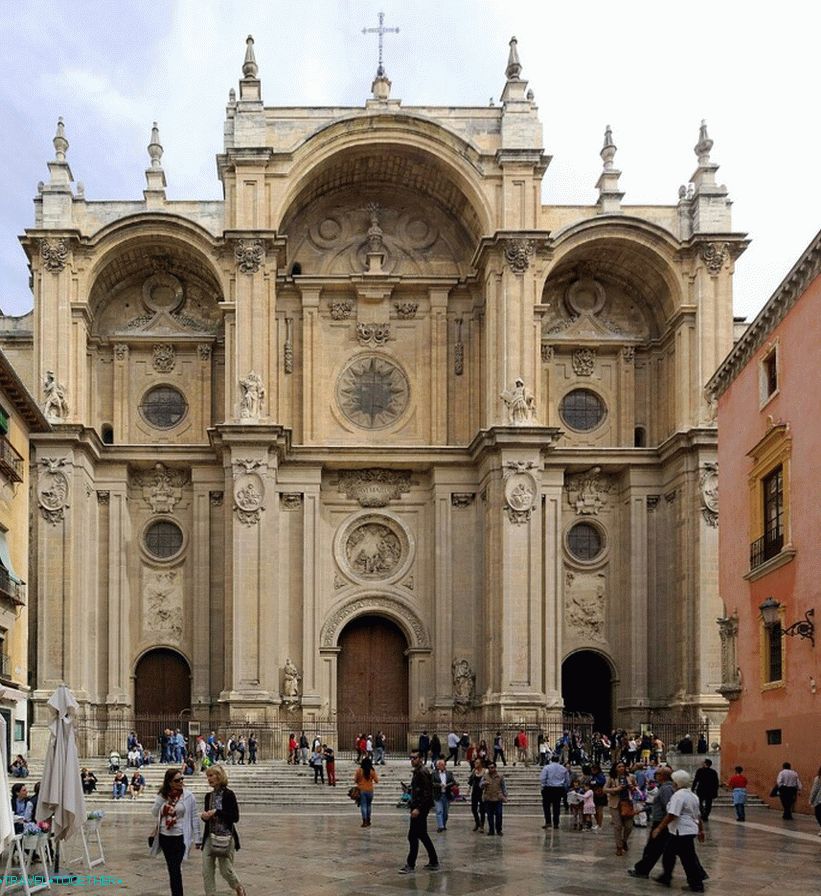 Cathedral or Santa Maria de la Encarnacion considered the most beautiful Renaissance church in Spain. The cathedral was built by queen Isabella as a monument to the victory of Christians over Moors on the site of the former mosque. The church began to be built in the 16th century. in the Gothic style. On the western facade of the 16th century above the main The entrance is a wonderful large terrain. Northwest The side of the cathedral is also richly decorated with decorative sculptures. On The main entrance to the facade has statues of Catholic monarchs and bronze statues of the apostles.

The decoration of the church is a great example of an era Renaissance and Renaissance. In the interior there are massive columns and double passes. The nave and transept are surrounded by various chapels, which are decorated with many sculptures and paintings. Each of them has its own artistic style. The chorus boasts two impressive baroque organs. 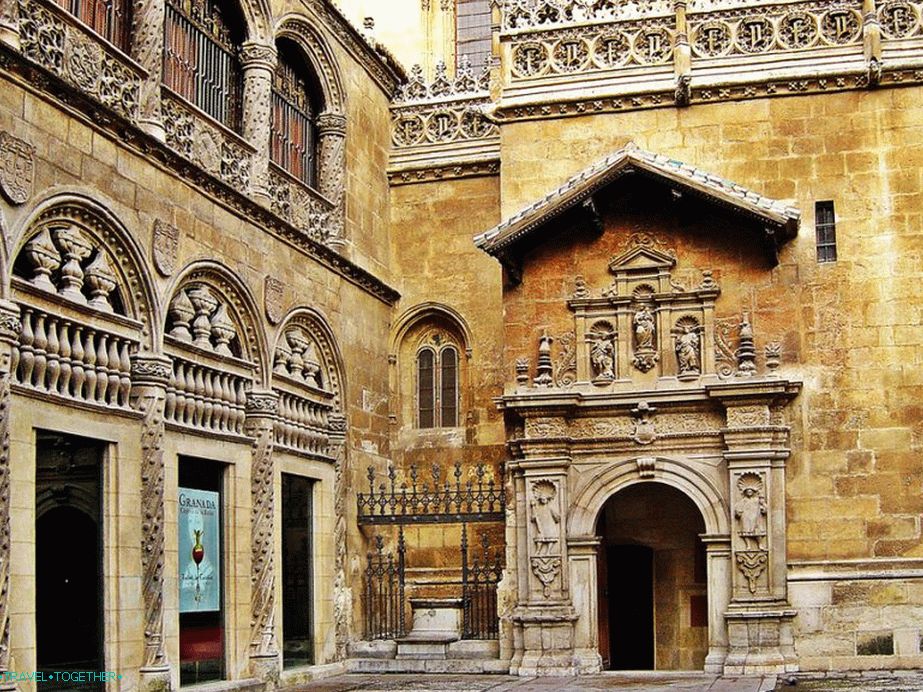 The Royal Chapel is an impressive 47 meter dome building, which is located next to the cathedral. it addition to it was built in the first half of the 16th century in Late Gothic style. Here are the royal tombs. The interior is decorated with beautiful stained glass windows of the 16th century and seven large paintings. Alonso Cano. On the right is the tomb of Ferdinand and Isabella from Carrara marble, created by sculptor Domenico Fanchelli from Florence. In the chapel there are also sarcophagi of other kings and princes. The highlight of the chapel is a sacristy with a masterpiece Botticelli. 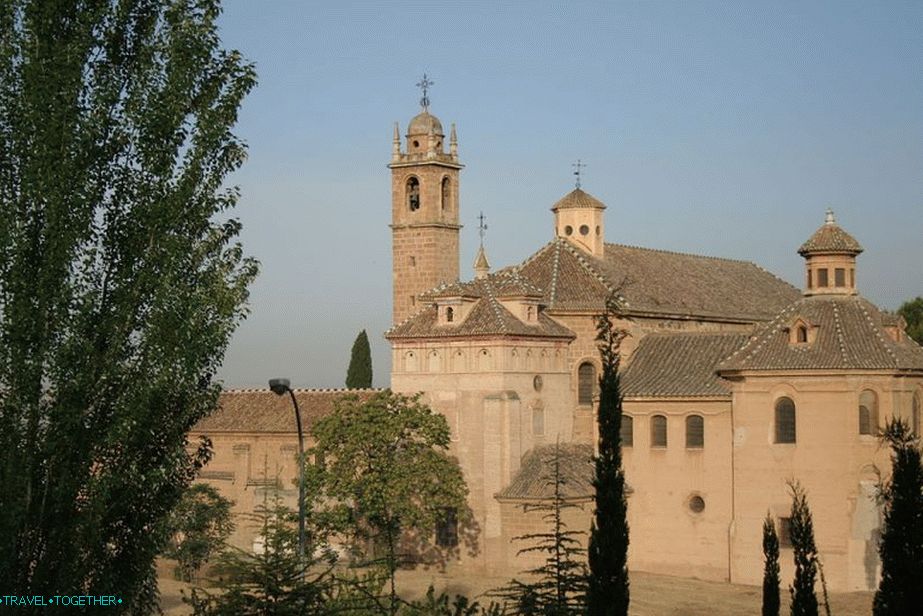 The monastery of la Kortuha is a magnificent example of architecture in style. baroque. Construction began in the 16th century and continued on. over three centuries. One nave church is decorated numerous objects of art. 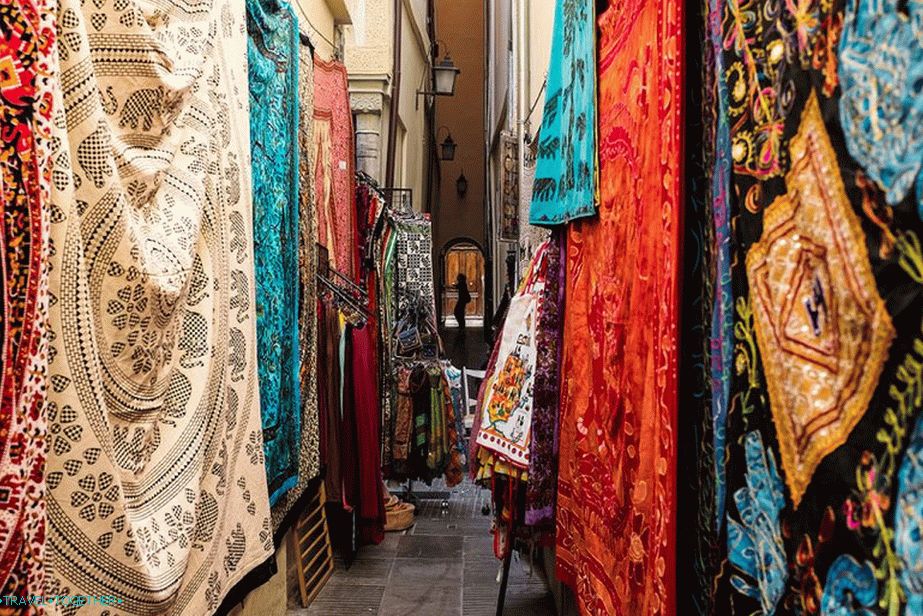 Arab spice market – a traditional eastern market in the old the city. Until 1853 there was a Moorish bazaar at this place, destroyed by fire. The whole area of ​​Alkayseria is a labyrinth of narrow streets, which once occupied the market of silk and spices. Today’s market resembles the original Arab market and is favorite place to buy souvenirs in Granada.

Granada on the map of Spain