Germany – the most detailed information about the country with a photo. Sights, cities of Germany, climate, geography, population and culture.

Germany is a state in Central Europe. One of the largest and the richest countries of the European Union is washed by the Northern and Baltic Seas and borders with Denmark to the north, with the Czech Republic and Poland in the east, with Austria and Switzerland in the south, with France, Belgium, Holland (the Netherlands) and Luxembourg to the west. Germany consists of 16 federal states and is federated a state with a parliamentary form of government. Official language – Deutsch. Most of the population professes Christianity.

Germany is one of the most popular destinations for leisure travel. The country is extremely diverse: from sandy the beaches of the Baltic and North Seas to the mountain ranges of the Alps in the south, from dark forests and picturesque nature of the Black Forest to the endless fields agricultural regions, from the vineyards of the Rhine Valley to chalk cliffs of Rügen. Here you can find a place for the soul of each: the ancient cities of Bavaria – Nuremberg, Regensburg, Bamberg or the famous Hanseatic cities – Bremen, Rostock, Lübeck, modern megacities – Berlin, Hamburg, Munich and Frankfurt am Main or other popular tourist centers – Dresden, Hannover, Cologne. 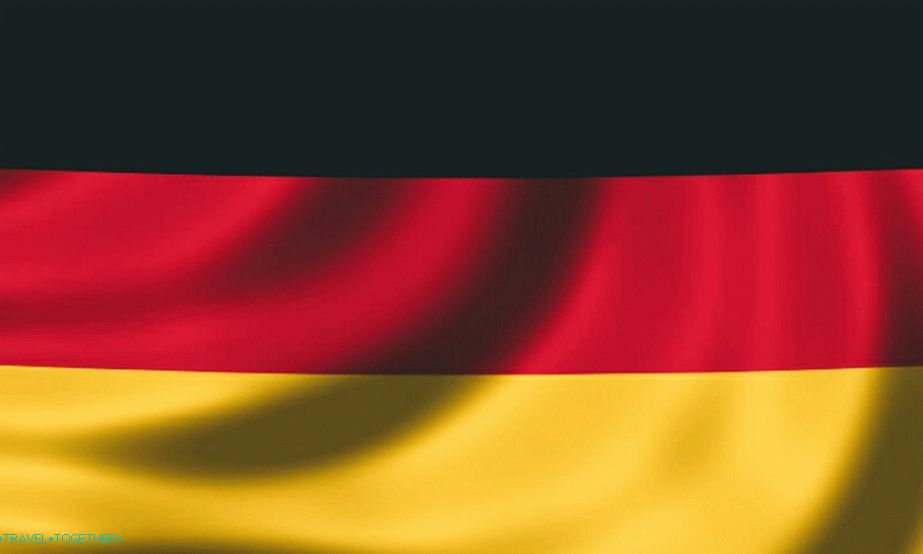 North Germany is a plain. central part countries are mainly hills and foothills covered with forests. South part of Germany is mountainous. Here begins the Alps and is located the highest point is the Zugspitze mountain (2,962 m). 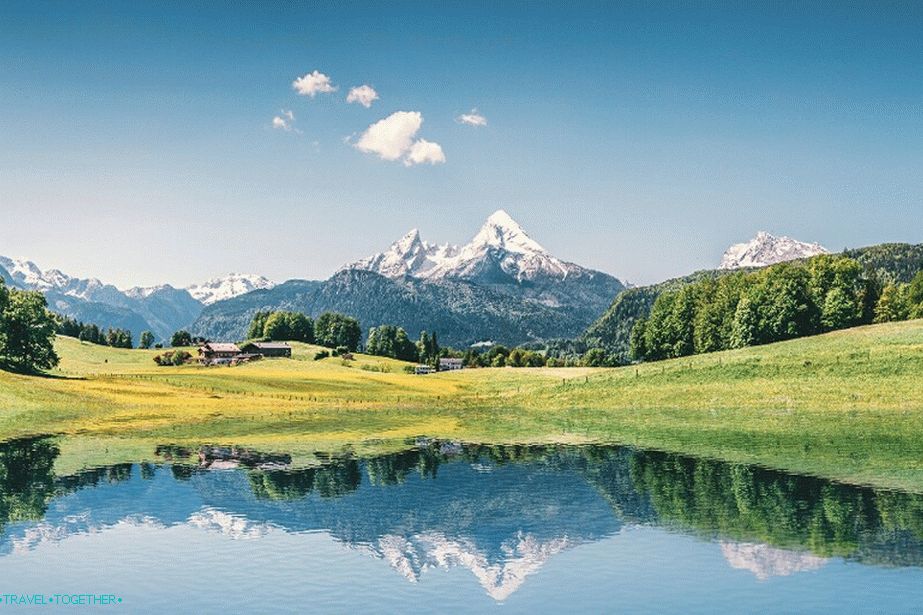 The alps in Germany

A huge number of rivers flow through Germany. The largest of them: Rhine, Danube, Elbe, Oder. The largest lake is the Constance, area of ​​more than 500 square meters. km and a maximum depth of 250 meters 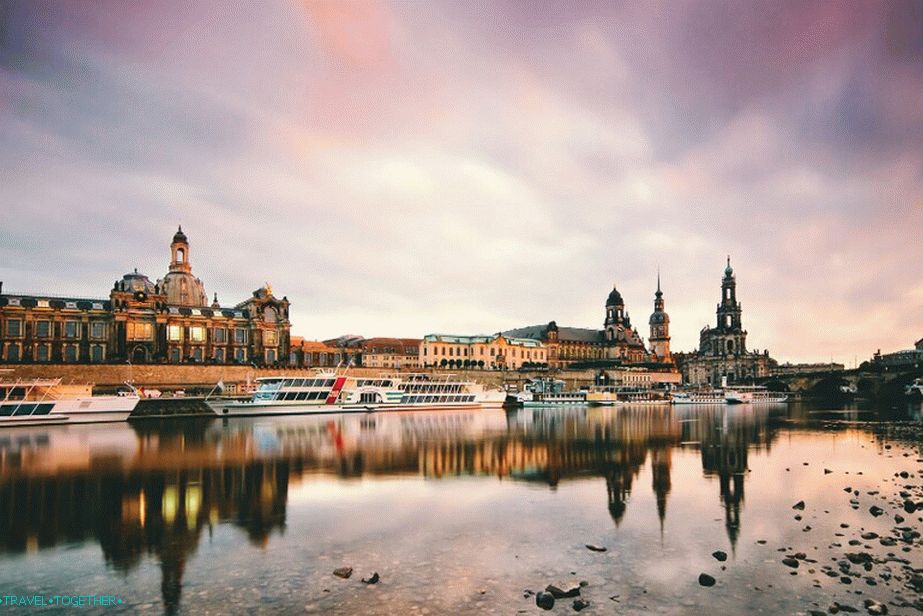 The north of Germany is washed by the North and Baltic seas. Here The main seaports and sea resorts are located. In the coastal The zone has a large number of islands, the largest of which Rügen Island. 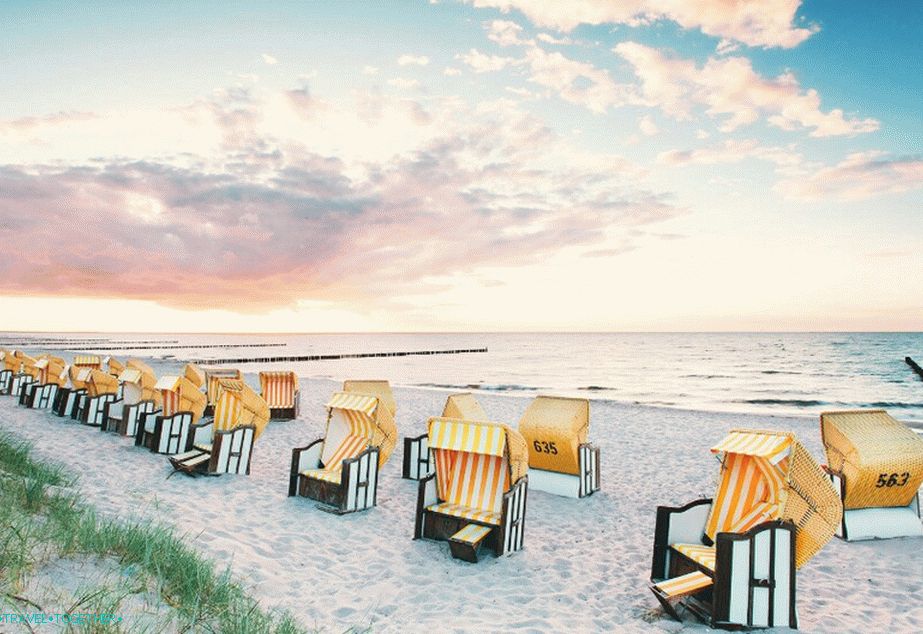 The nature of Germany is typical for a temperate climate. Most of territory (32%) is covered with deciduous and mixed forests, in which are dominated by spruce, pine, oak and beech. In arid places there are heather plains, a small part of the territory is covered swamps in the mountains can be found alpine and subalpine meadows. Half of the country is agricultural land: fields and pastures. In the Rhine Valley – vineyards. Wildlife characteristic of the forest zone, except that in Germany there are no major mammals: elk, brown bears, wolves, etc. 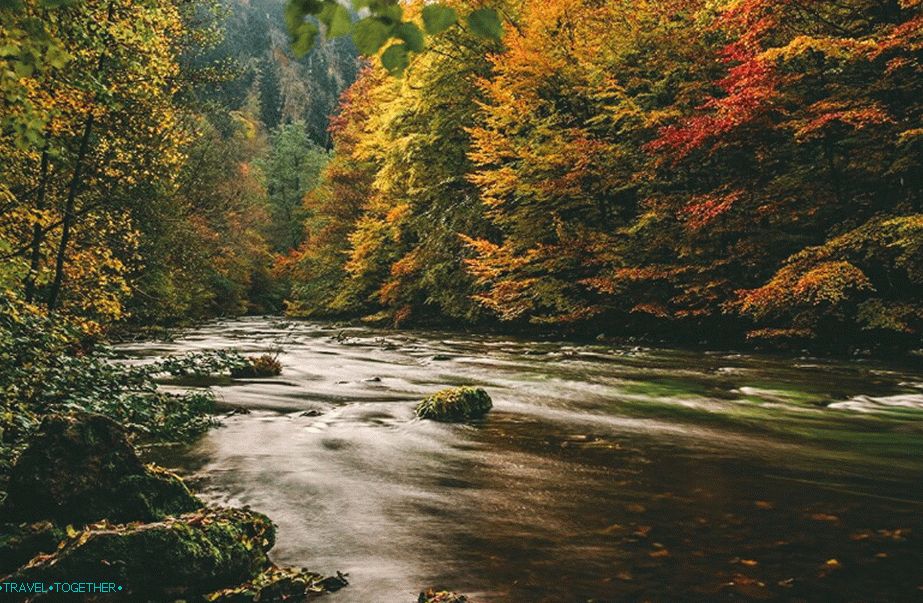 Germany is located in a temperate zone. Climate in the north and the weather is largely determined by the proximity of the sea. In the south, the climate is closer to moderately continental. The weather in Germany is often satisfied. changeable. Warm days can alternate between cool and rainy. In general, the seasons of the year are clearly distinguished and some extreme weather events (heat, severe frosts and hurricanes) quite rare and transient. Average summer temperature from 15-20 degrees In winter, temperatures are low or low. frosts. In the mountains, of course, colder. For the year falls 600-800 mm precipitation (it all depends on the region). 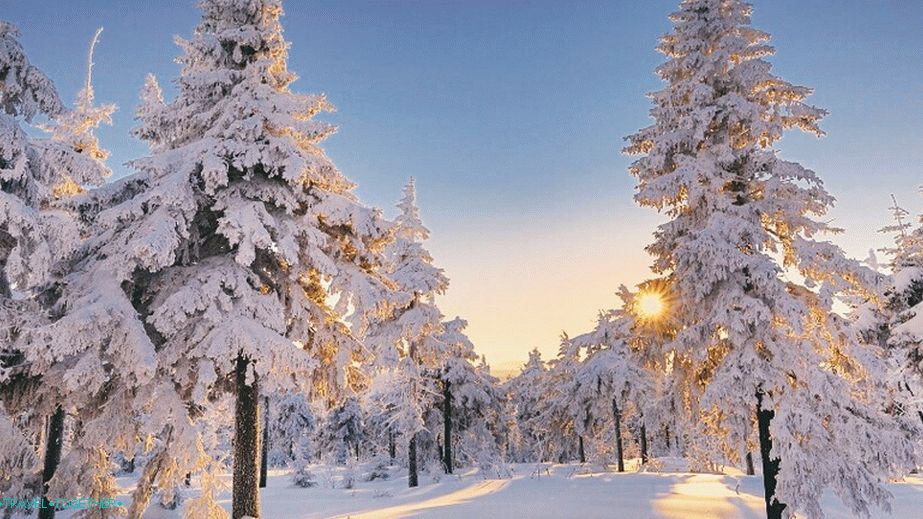 Germany is a country that can be visited almost round year. It all depends on the season you love. Germany is magical at Christmas and in winter, covered with snow, blooming in spring, green in summer and beautiful in autumn. The ideal time to visit It is considered the period from May to August. This is the time of the highest tourist season. Transition with comfortable weather conditions – March-April and September-October. Late autumn and winter (except Christmas holidays) low tourist time season, which is not bad for economical travel. 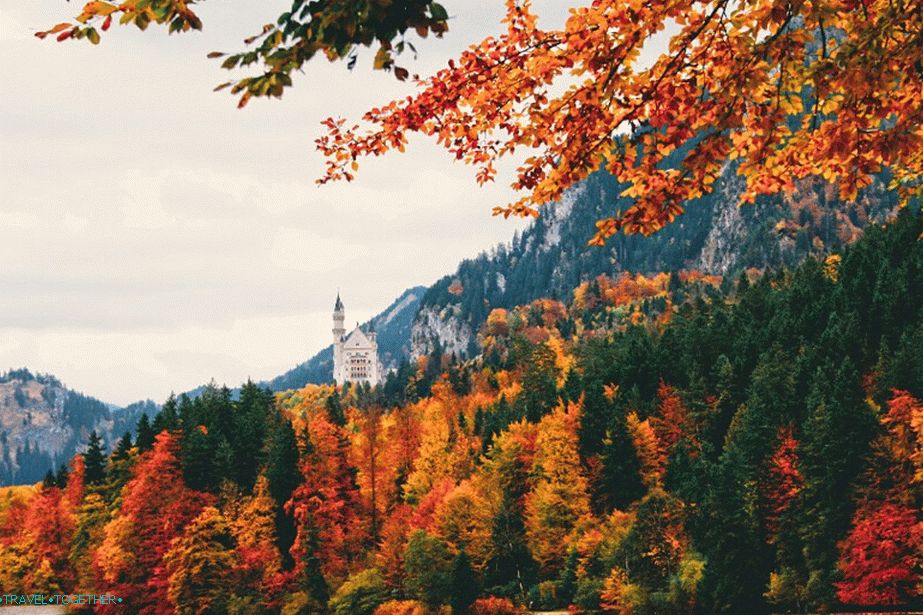 The name of the country in Russian comes from the Latin name tribes inhabiting the Rhine Valley and dates back to Roman times empire. The Romans called these tribes “Germans”. Official country name in German – Deutschland. Used by from the 15th century.

The first mention of the Germanic tribes belong to the period Ancient Greece. Further mention of the Germans are found in ancient roman documents. From Antiquity to the 10th century, most The territory of Germany was settled by Slavic tribes. After the collapse of the Roman Empire in Western Europe was formed kingdom franc. In the 9th century, Charlemagne created a new empire, which lasted only a short time. Grandchildren Karl shared empire into three kingdoms. Kingdom of Eastern Francs subsequently became Germany. 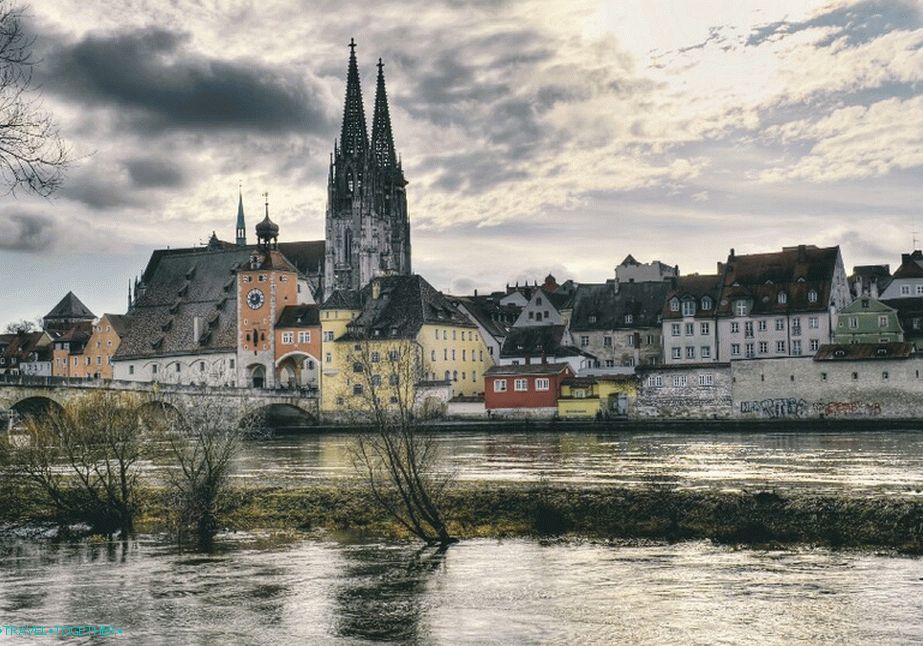 The founding date of Germany as a state is considered to be 962 when the king of eastern francs Otto I became king of the sacred Roman empire. The Holy Roman Empire represented confederation of lands with broad powers. They had their own coin the army. The emperor was chosen on a special council. My interests land represented in the Reichstag.

In the 12-14 century, the lands on which the Slavs lived, one way or another entered in the composition of the Empire. Slavic population was ousted or assimilated.

The Holy Roman Empire ceased to exist at the beginning 19th century during the Napoleonic Wars. After the Congress of Vienna was formed the German Union, which was ruled by the Kaiser. In 1866 The German Union fell apart. In 1877 was formed North German Union, later became the German Empire. AT the end of the 19th century, Germany is becoming one of the leading countries in Europe. AT The country is flourishing culture, science and philosophy. 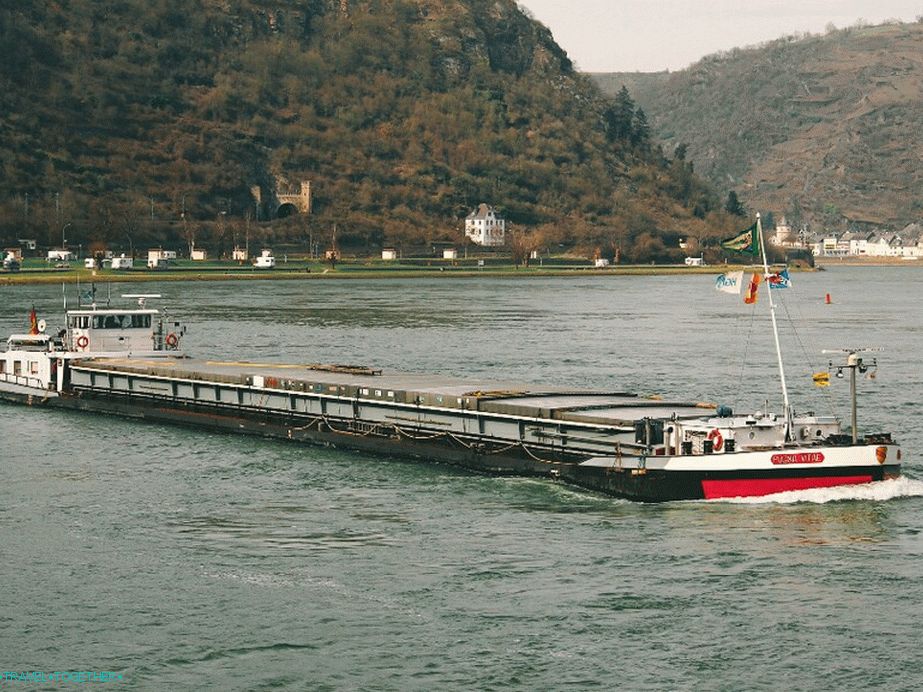 In 1914, Germany entered the First World War. In 1918 as a result of the revolution, the King of Prussia abdicated, and Germany became a socialist republic. In 1933 to power comes the national socialist party led by adolf Hitler. In 1939, World War II was unleashed. After the end of the war and the defeat in it the country was divided into two parts – FRG and GDR. In 1990, Germany became united. GDR entered into composition of the Federal Republic of Germany. 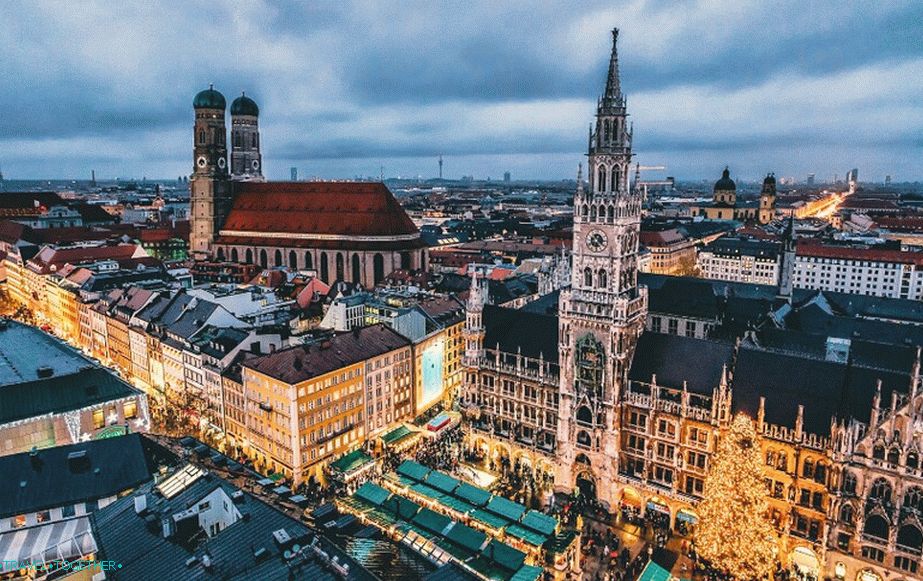 Germans – a neat nation, serious and disciplined. They try to stick to the rules, love order, are serious when all questions and sometimes even too pedantic. About openness – it all depends on the person. Basically, the Germans are enough open and friendly. It seemed that the population of West Germany more openly than Eastern. 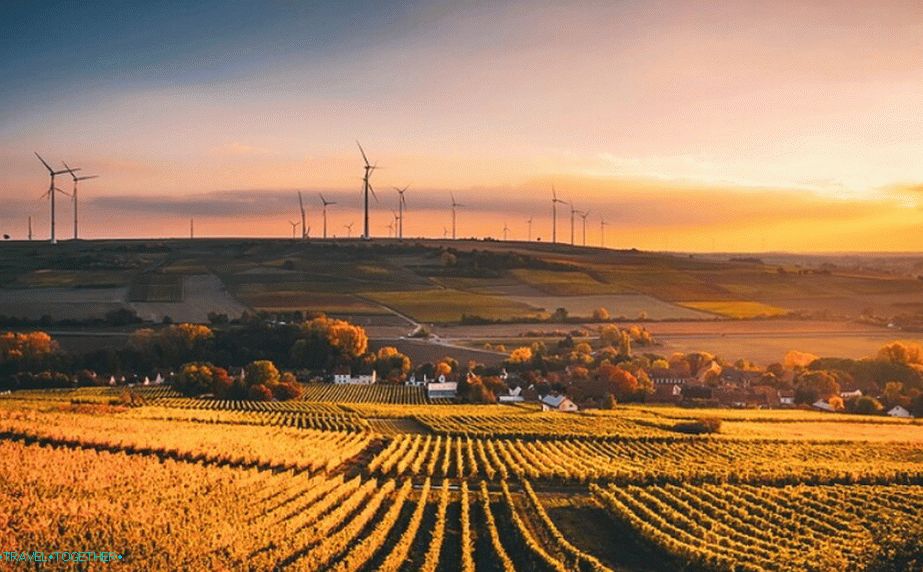 The transport infrastructure of Germany is one of the best in Europe and the world. One of the main advantages of the transport network are famous highways. These are high-speed highways with excellent road surface. Some of them do not even have restrictions. speed. Considering that the motorways connect Germany with neighboring countries are free, while the cost fuel here is slightly cheaper than in France, Austria and Italy, traveling around the country by car is very fast and comfortable. One of the downsides is that there are congestion near large cities and fairly dense traffic flows that increases travel time somewhat. 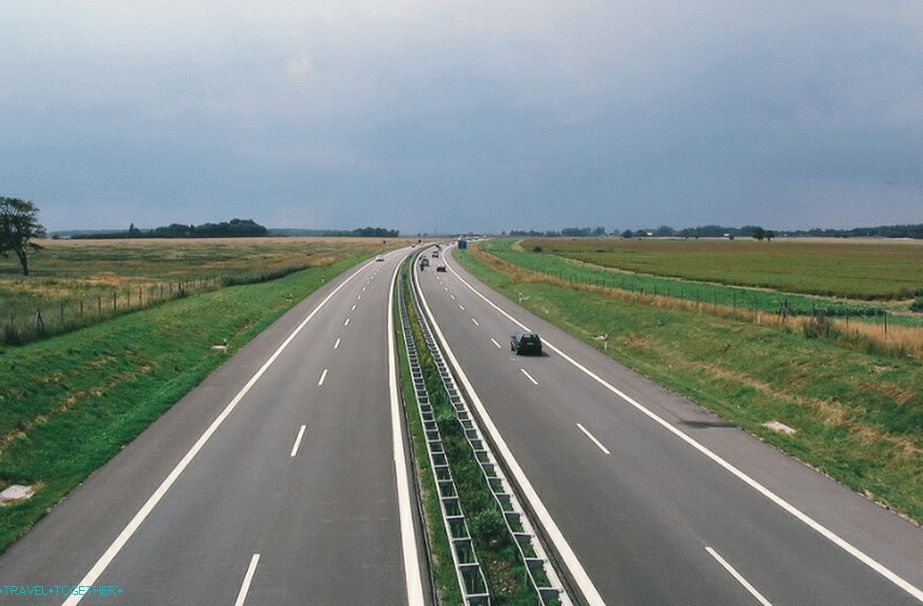 Quite a lot in Germany and international airports. They connect the country with almost all the states of Europe and the world. Germany’s largest airports are located in Frankfurt am Main, Munich, Hamburg, Berlin, Düsseldorf, Cologne, Dresden, Nuremberg.

Also in Germany developed railway communication. The length of railways is more than 35 thousand km. High speed trains are integrated into the European transport system.

View the schedule and tickets for various types of transport here -https: //www.verkehrsmittelvergleich.de

The capital of Germany is the city of Berlin, located in northeastern part of the country on the banks of the river Spree. This is one of largest cities in Europe. Berlin became the capital at times German Empire From 1961 to 1989 was divided by a wall which became one of its main attractions and characters. 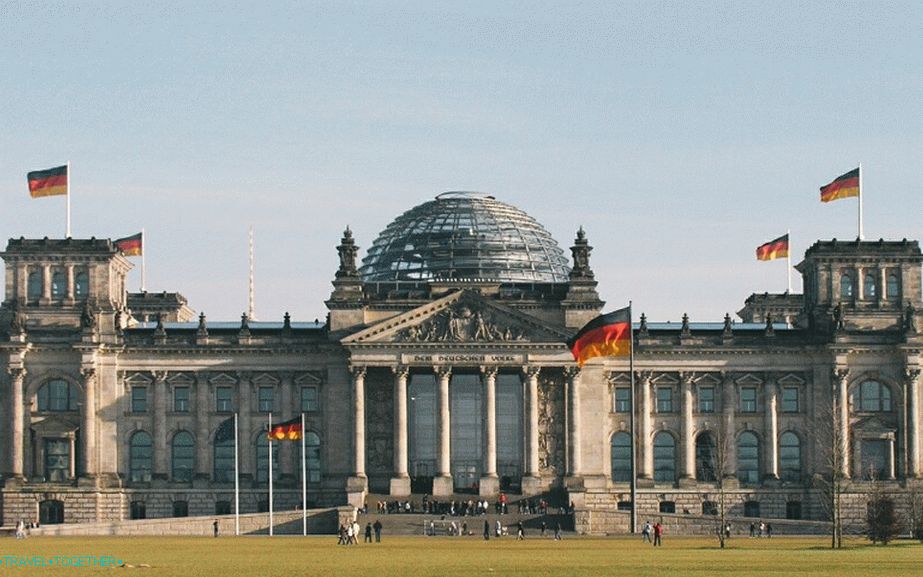 The economic center of Germany is the city of Frankfurt am Main. Also this is probably the most modern city in the country with skyscrapers and many new buildings. Noteworthy and the former capital of Germany – Bonn. 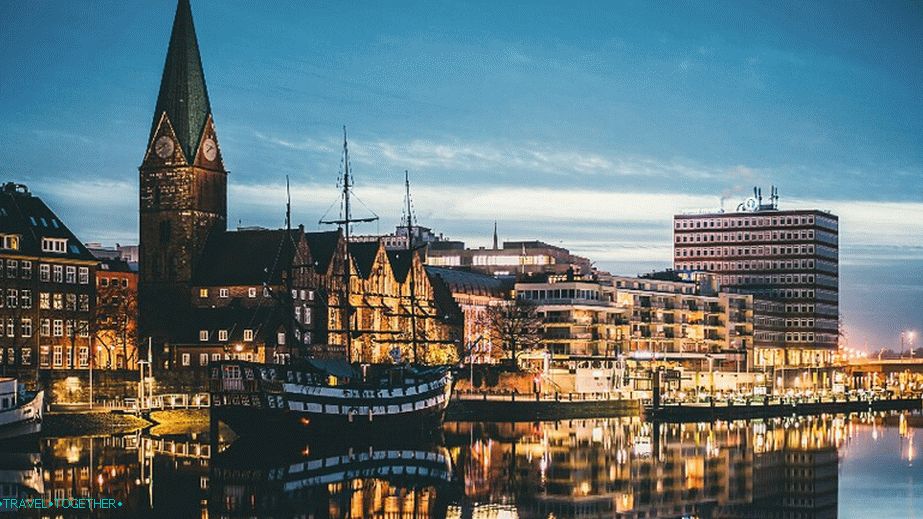 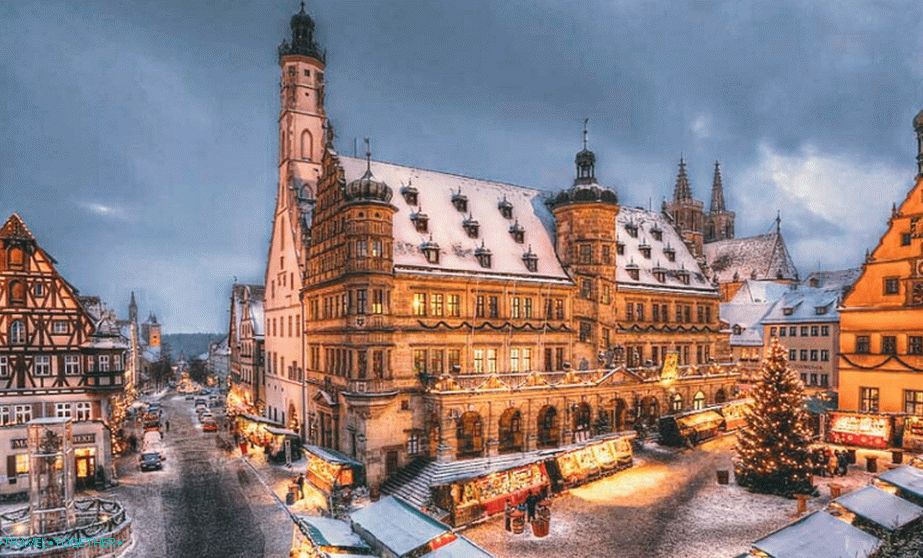 From other interesting cities, the capital of Saxony should be noted – Dresden, romantic Freiburg, Essen and Ruhr industrial centers Dortmund, as well as Cologne, Hannover, Düsseldorf, Leipzig, Stuttgart and founded by the Romans Augsburg and Trier.

Germany – a country rich in landmarks and monuments architectures that mainly refer to the period Middle Ages. There are also outstanding natural sites: the Alps, Rhine Valley, Lake Constance, Black Forest, Rügen Island and much another.

On the territory of Germany there are 34 objects listed in UNESCO World Heritage List. 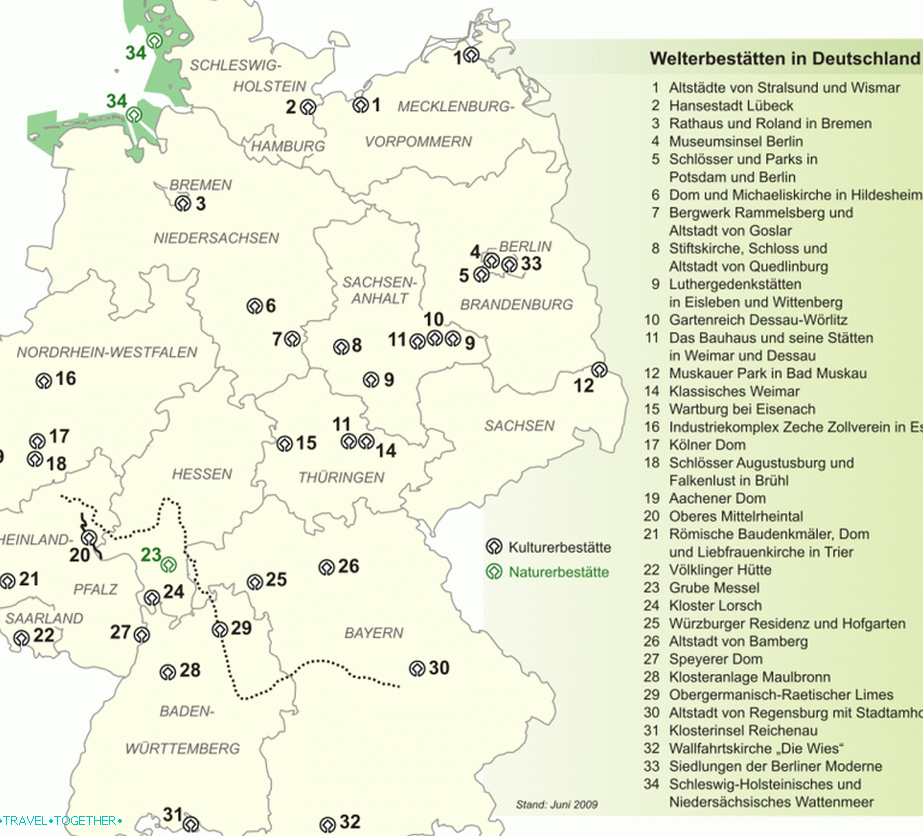 In Germany, there are a large number of locks. Most the famous ones are Kaiserburg in Nuremberg, Neuschwanstein, Hohenzollern, Heidelberg, Wartburg, Hohenschwangau. 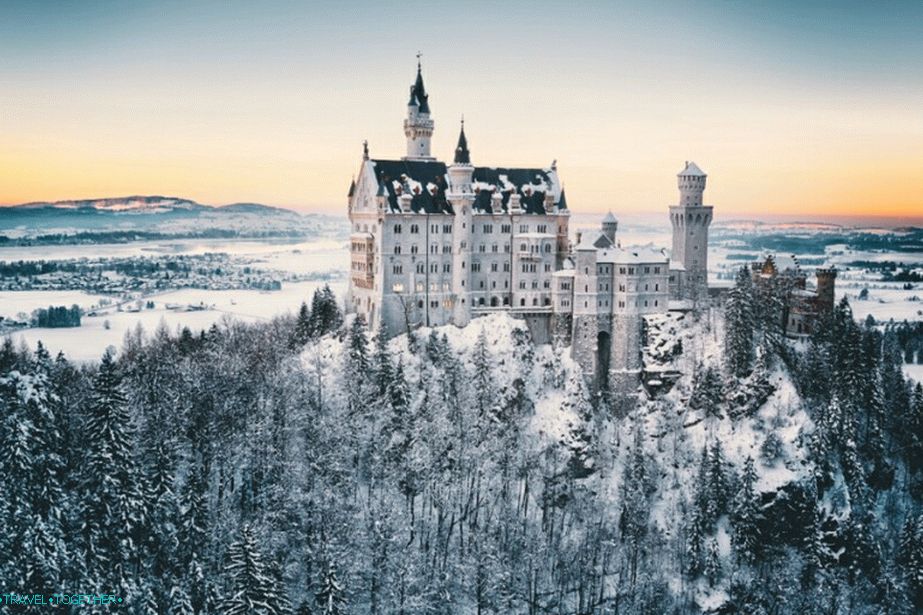 Very famous are the monuments of sacred architecture – ancient cathedrals and churches. In Northern Germany and in Bavaria preserved grand masterpieces of the Gothic.

Germany is an extremely interesting country for tourists. Despite two world wars, almost every old city can surprise interesting sights and old architecture.

Germany has a huge number of hotels, hotels, boarding houses of different price categories. Average room rate well above the neighboring Czech Republic and Poland and is located approximately on on par with France, Austria. Although if you plan the journey in advance can be found very economical and comfortable options. In many places included in the price breakfast which is usually very good. Basically, a nice room for two in almost any region of Germany can be found for 50-70 Euro.

German cuisine is a synthesis of Eastern European and Western European dishes. However, there are differences in the kitchen north and south. Dishes of traditional regional cuisine can be found. in Northern Germany and Bavaria.

The cost of food in Germany is not the cheapest. Average score on two in an inexpensive restaurant is about 50 Euro. 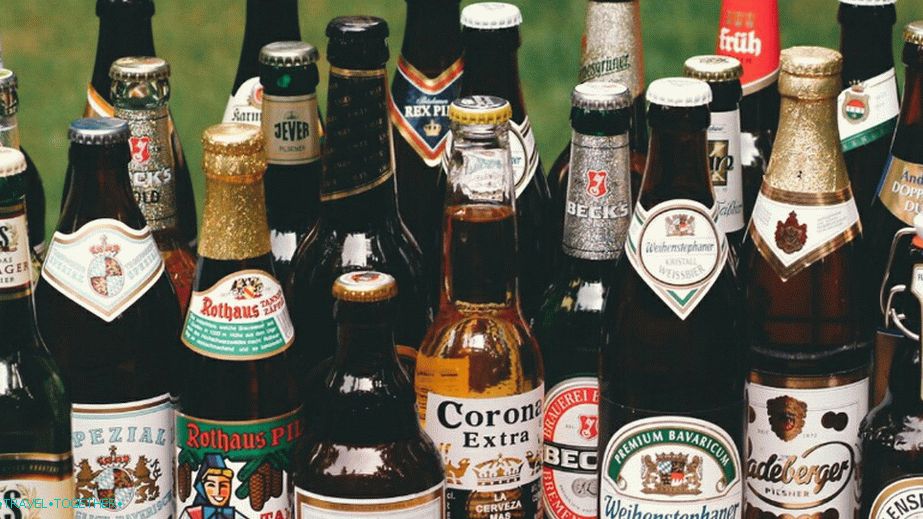 The main drink in Germany is beer. The quality and the volume of production of foamy beverage is not inferior to the Czech Republic. AT wine regions are located in the historic region of Franconia which produce very good wine.

Germany on the map