Genoa (Italy) – the most detailed information about the city with photos. The main attractions of Genoa with descriptions, guides and cards.

Genoa is a city in northwestern Italy, the capital of Liguria. Is an one of the largest Italian ports with a glorious and rich history. Genoa is the capital of the once powerful and rich Maritime Republic with the largest historical center among cities Europe, the birthplace of the legendary Columbus and the genius Paganini. This is a city with amazing charm: the sea, the old port, many rich old palaces and beautiful sights hidden among the cozy streets and reminiscent of past wealth, excellent cuisine and a kind of port atmosphere. All it does Genoa is one of the most interesting cities in Italy.

The capital of Liguria is often deprived of attention. Most tourists coming to Italy, they want to see the antiquities of Rome, to touch the cultural jewels of Florence, dream of Venice or shopping in Milan. Many people think that Genoa is the pale shadow of a mighty sea Power, just a big city and a major port. And this is not quite so! Here are the facades of rich historical buildings and cultural monuments hidden among the scruffy but atmospheric streets that are filled charming lanes, street cafes and restaurants, and in the old the port is still full of life, as before.

Genoa is located in the northwestern part of Italy almost at base of the “Italian boot”. The city stretched out long narrow strip along the Gulf of Genoa of the Ligurian Sea and is bounded the sea and the Apennine mountains. The climate is humid subtropical. Summer pretty hot and the winter is rainy and cool. For the year falls more than 1000 mm of precipitation. Best time to visit: May-September. In October, the season begins. frequent rains, which lasts until February.

In antiquity on the coast of the Gulf of Genoa existed small greek colony. Later fishing was founded here. the settlement of the tribe of the Ligurians, destroyed in the 3rd century BC Carthage. Around this period these territories were annexed. to the Roman Empire. After its collapse, Genoa possessed alternately Ostrogoths, Byzantines, Lombards and Franks.

The rise of Genoa as one of the largest ports begins at 10th century. In the 12th century, it was already an independent city-state with an extensive network of colonies and numerous trade links, no way inferior to the wealth of Venice and Pisa. 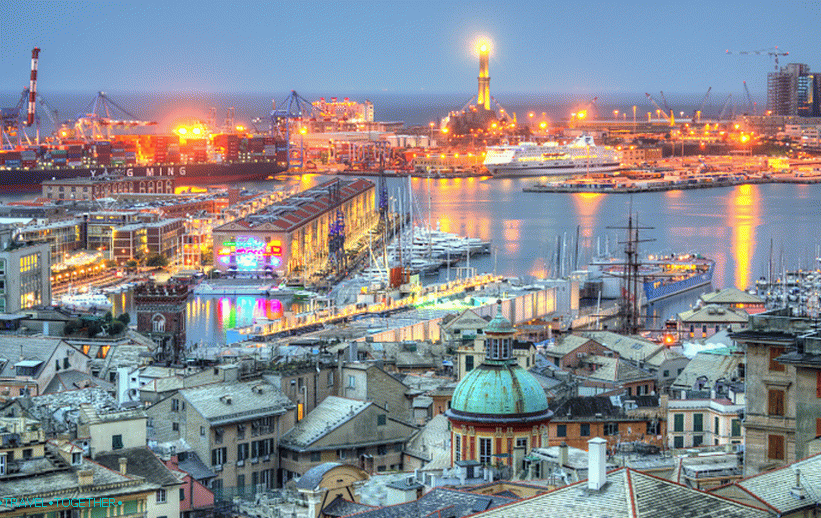 The decline of the maritime republic began in the 14th century. In the end century, Genoa became dependent on the French, and in 1421 – from milanese In the 16th century, the city was reborn. With the opening America and thanks to the alliance with Spain, Genoa became one of richest European cities. Economic well-being and prosperity continued until the 18th century.

In the 18th century, the Genoese Republic was transformed into French protectorate, and later generally joined to France. After graduation Napoleonic Wars and the Congress of Vienna Genoa went to Piedmont. In the second half of the 19th century, the city is part of the United Italy.

Genoa is a great place to shop. It’s easy to find designer boutiques, supermarkets, antique shops. Brand shops located in the Via Settembre area. Large shopping center under Fiumara is located next to the railway station.

Genoa is famous for its gastronomy. Main features Ligurian cuisine is pesto, focaccia, fresh seafood and fish, pasta, farinata (chickpea dish). In pizzerias can try a good pizza. Popular place with big The concentration of cafes and restaurants is Piazza delle Erbe. Many inexpensive establishments can be found on Via Garibaldi. Garibaldi Street is a true gem of Genoa. It was founded in the 16th century and became the site of construction of palaces of rich Genoese. On this small space are chic houses with noble coats of arms childbirth stand side by side, competing with each other beauty architecture and rich facades. Street garibaldi located just north of Ferrari Square near the quarter sailors. The palaces of Rosso, Bianco and Tursi are open to the public. And herself The street is a UNESCO World Heritage Site. 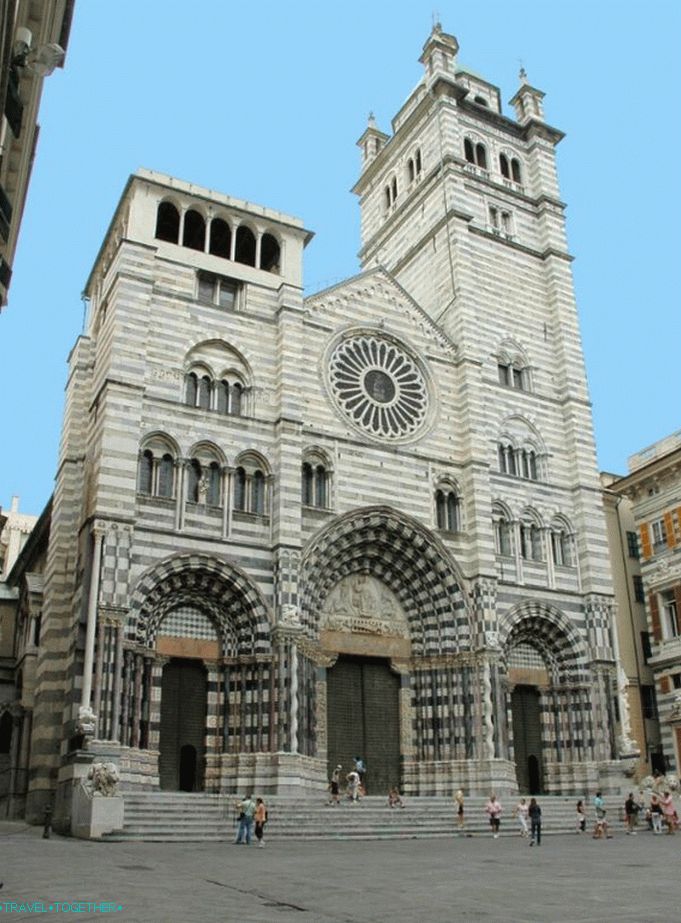 Cathedral of San Lorenzo – the majestic church and main sacral construction of the city. The cathedral was built in the 12th century. as a Romanesque basilica, reconstructed in the 14th century in the Gothic style and again rebuilt in the style of the early Renaissance in the 16th century. The building has a beautiful marble facade. Here are stored precious Christian relics: the ashes of John the Baptist and a plate, on which is believed to be Salome was represented by the head holy 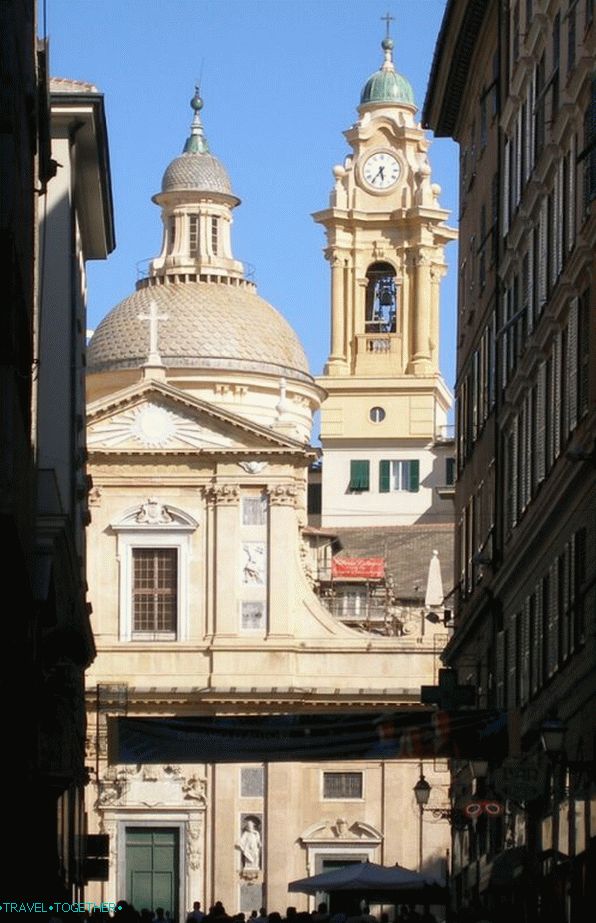 Santi Ambrogio – Jesuit Church in a small square Matteotti, built in the 16th century in the Renaissance style. It is believed that the temple has the most beautiful interior among religious buildings of Genoa: fancy baroque with marble, frescoes and two paintings Rubens. San Matteo – 13th century small gothic church with marble facade. Located near Santi Ambrogio on Via Tommaso. Inside there are many relics of the period of the Genoa Republic. AT the crypt is the tomb of Andrea Doria, which in the 16th century restored the independence of Genoa and increased the wealth of the city. 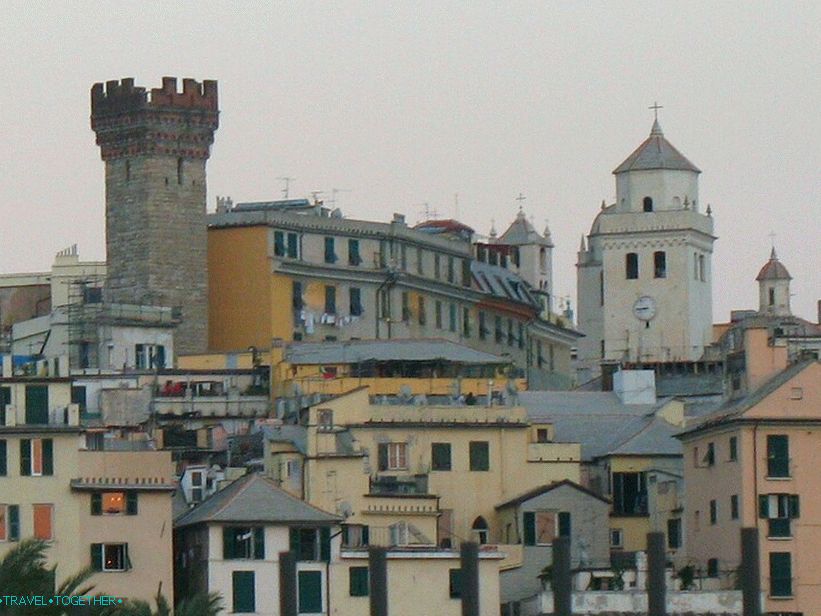 Santa Maria di Castello – 12th century Romanesque church with beautiful frescoes. Located in one of the most ancient places of Genoa, where trade Etruscans and Phoenicians. In the 15th century it was founded here. Dominican monastery. The Church of Jesus is a 16th century Jesuit church with a beautiful the interior in the style of the Genoese Baroque decorated with multicolored marble. Religious building built on the site of an earlier church founded by the Bishop of Ambrogio of Milan who fled from Lombards. 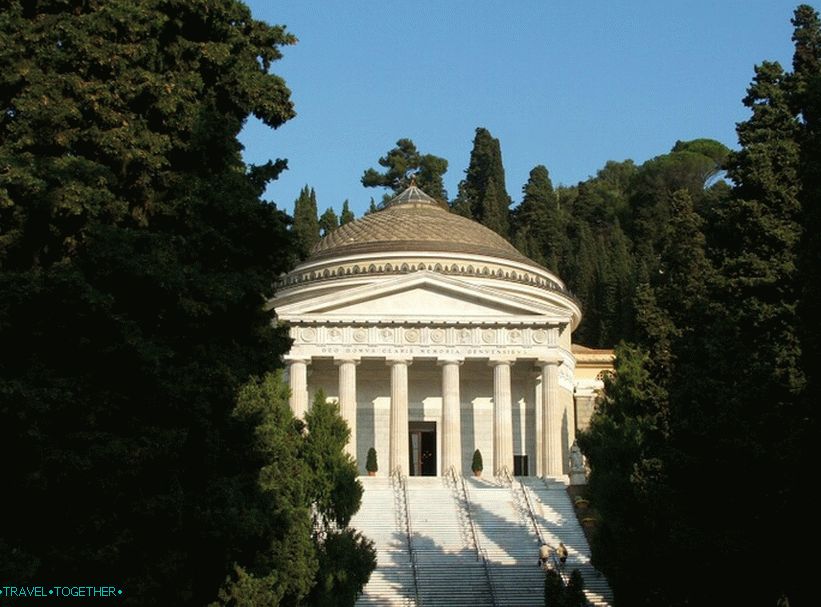 Chimitero di Staglieno – the beautiful Campo Santo, one of the most beautiful cemeteries of Italy. Here you can find many interesting gravestones in the style of modern and art nouveau. Genoa Aquarium – one of the largest facilities of this type in Italy and Europe. It was built in 1992 in honor of the 500th anniversary. the voyage of columbus. Great place for a family holiday. Genoa harbor – one of the largest ports of the Mediterranean, 22 kilometers of berths with yachts, ships, pleats and industrial cranes. We recommend to visit Porto Anti – old port, where the ships of Admiral Doria were built in the 15-16 century. Porta Soprano – two well-preserved medieval towers city ​​gate of the 12th century. Nearby is the Columbus House, in which, is believed to have spent his childhood famous navigator. Ferrari Square is the lively center of Genoa with a beautiful fountain. The square is surrounded by beautiful neo-baroque buildings and Art Nouveau.

Palazzo Ducale – one of the most magnificent historical buildings of Genoa, the palace of the Genoese Doges. The building was founded at 13 century. The medieval part is still noticeable. Palace constantly expanded and rebuilt. Last reconstruction was produced in 1992. Embriaci – a tall medieval tower built in the 11th century. This is one of the few surviving towers that were erected eminent Genoese near their houses. Vittoria Square is one of the central urban squares with an impressive triumphal arch built in the 30s of the 20th century. Aqueduct – an engineering structure to supply water to the city, built in the 13th century. San Giorgio – one of the most beautiful and vibrant buildings of Genoa with beautiful facade, which is located port management. The history of the palace began in the 13th century. This palazzo consists of two different parts: one part is older, typical sample medieval urban architecture, and the other – in the style Renaissance. Lanterna – one of the symbols of Genoa, the lighthouse of the 16th century in height 117 meters To see the port and the historical center of the city from its height need to overcome 172 steps. Fishing Village – an old and picturesque seaside enclave, located within Genoa. This is a district of pretty pastels. houses and cozy restaurants with terraces.

There are practically no beaches in Genoa, although the capital of Liguria is located close to beach resorts. Small nice pebble beach can be found just in the fishing village.

Genoa on a map of Italy