Cagliari (Italy) – the most detailed information about the city with photos. The main attractions of Cagliari with descriptions, guidebooks and cards.

Cagliari – a city in Italy, which is the capital of the island Sardinia. It is the center of a magnificent gastronomic and historical a region that for several millennia has been a place mooring of almost all ships sailing the Mediterranean. That is why Cagliari has a rich and diverse heritage. which is reflected in its architecture and culture. Here you can see the remains of Roman buildings and medieval towers, baroque churches and neoclassical arcades, spanish gothic and italian modern

The oldest part of Cagliari is called Castello. She lies on the slopes of the hill with a beautiful view of the harbor. In the past this place was an arena of struggle between the Pisans, the Genoese and the Spaniards.

Cagliari is located in the south of Sardinia overlooking the bay of the same name, which is also called the “Bay of Angels”. The city has a warm Mediterranean climate with hot, dry summers and very mild in the winter. Cagliari is known for its beautiful coastline and excellent beaches. The main beach is called Poetto and has a length of 8 km 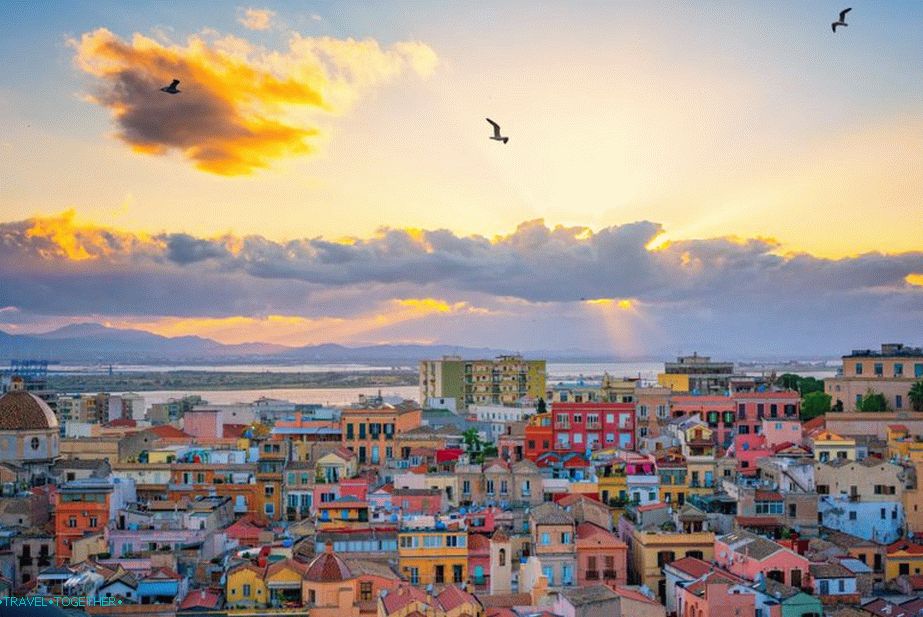 A settlement on the site of modern Cagliari existed as early as antiquities. The history of the city begins in the 8th century BC. In that period Phoenicians founded the settlement of Karalis here. In the 6th century BC. er it was captured by Carthage. In the 3rd century BC. Sardinia was conquered by the Roman Empire.

After the Civil War, which took place between the years 49-45 BC e., Cagliari became the capital of Sardinia, and its inhabitants received rights of roman citizens. The Romans changed the layout of the city, built plumbing, roads and numerous buildings. In the 5th century AD Sardinia was conquered by the Vandals. In 532, the island became part of Byzantium. 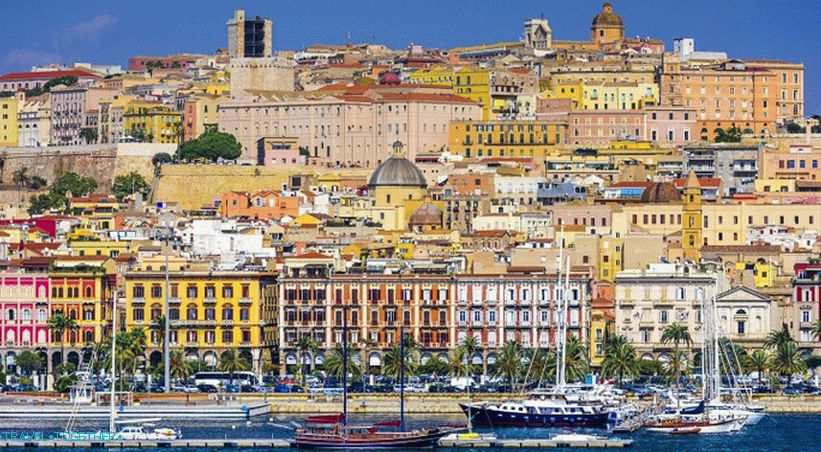 In the 9th century, the Byzantine Empire lost Sardinia, and Cagliari itself went into decline. In the 13th century between Genoa and Pisa turned fighting for a city that lay on an important merchant sea route. AT In 1258, the Republic of Pisa won the battle. Pizantsy strengthened Cagliari by building powerful walls.

In 1324 the city and all of Sardinia became part of the kingdom. Aragon. The Spaniards ruled the island until the early 18th century. After the war for The Spanish legacy of Cagliari became part of a state called Piedmont, also called the Sardinian kingdom. 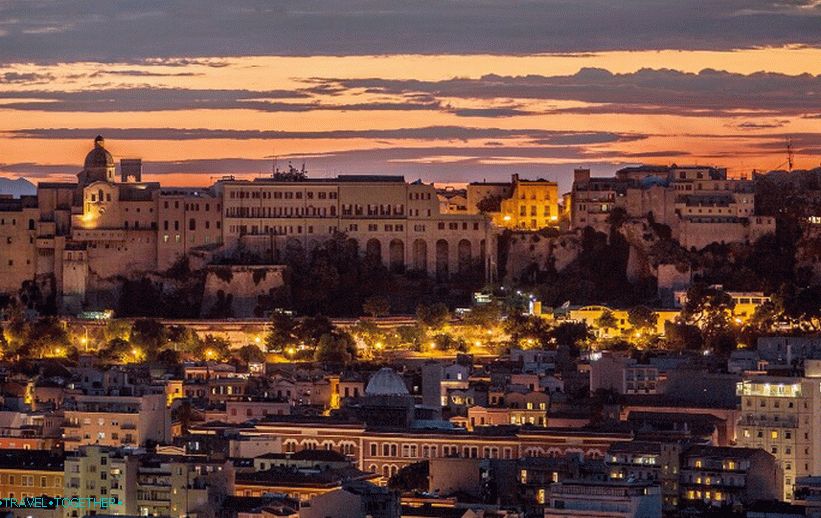 Sardinia became part of Italy in 1860. In the years of the second World War II Cagliari was heavily bombarded.

Cagliari is the main transportation hub of Sardinia. City It has an airport, which is only 7 km away. center. Also Cagliari has a regular ferry service with Naples and Palermo. 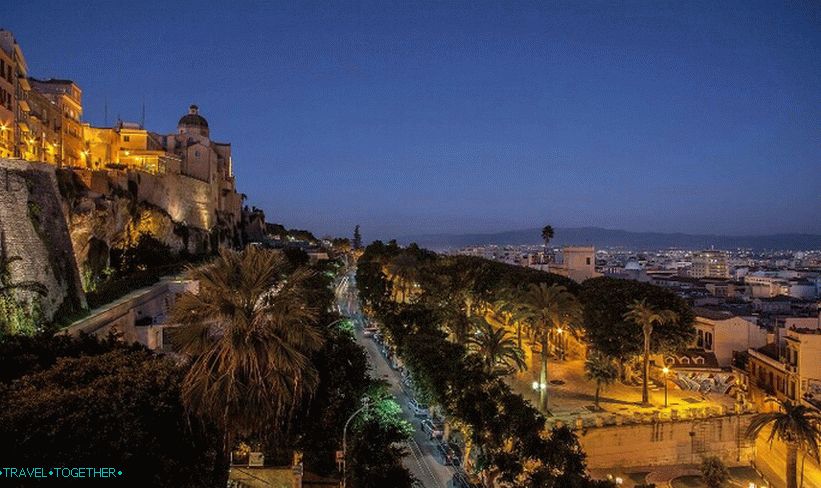 Harbor is one of the most popular places of Cagliari with many shops and restaurants. It consists of a wide promenade, port and parking for yachts. Over the harbor rises Castello, along which Cagliari’s main shopping street is Via G Manno. 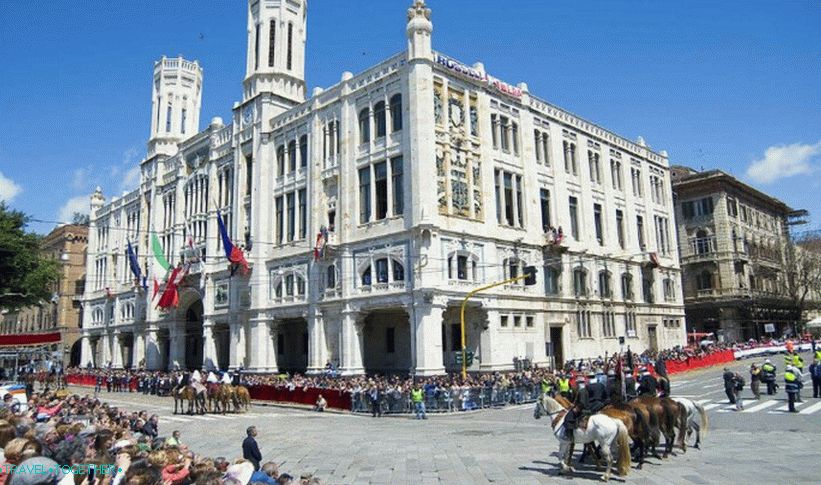 The Town Hall is a magnificent white stone building built in the beginning of the 20th century in the style of Spanish neogothic with ornaments Art Deco. 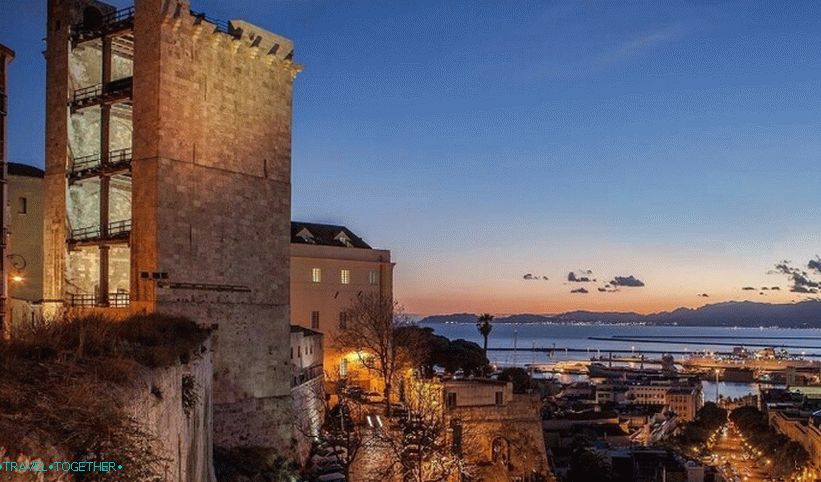 Castello is a charming historic district of Cagliari, full of true Sardinian atmosphere. It towers over the harbor and includes many colorful buildings, as well as several wonderful sights. Castello was formed Pisans who built powerful walls and bastions. 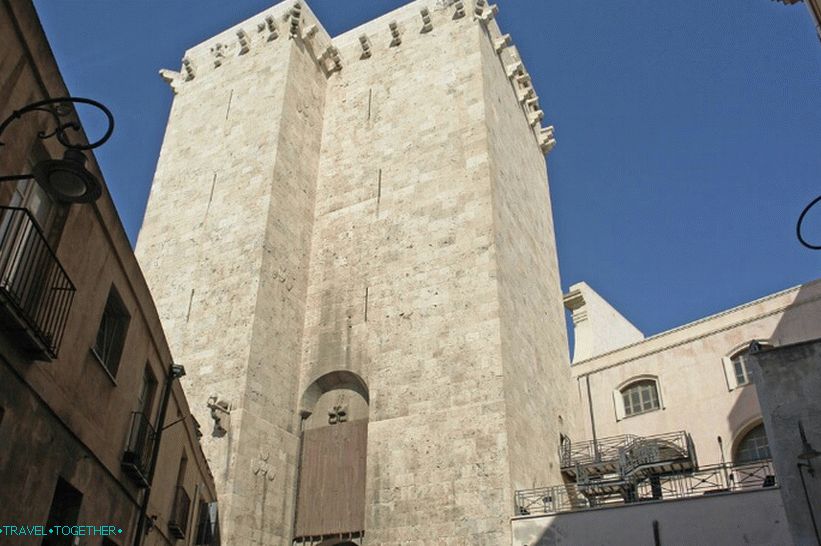 Elephant Tower – one of the most impressive and famous historic buildings castello. Located just a few minutes walk from the bastion of San Remy. The tower was built in 1307 year, performing the functions of a watchtower in the defensive system Cagliari 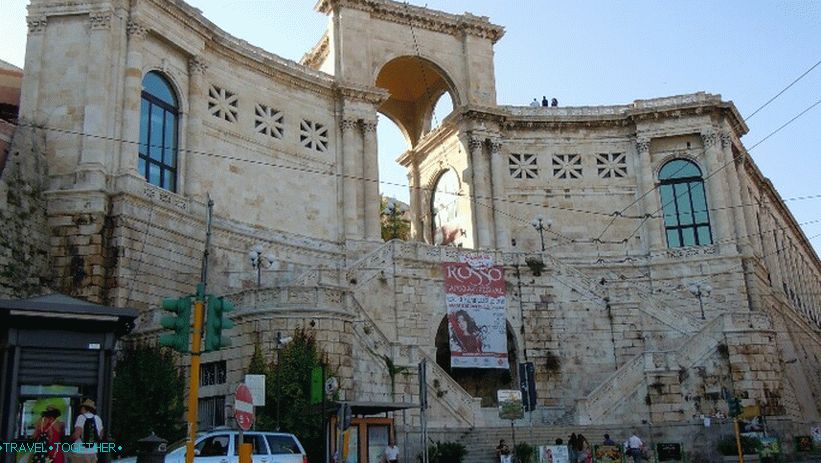 The Bastion of San Remy is a huge and richly decorated structure, which is in the heart of the old city and is one of symbol of cagliari. Initially, his function was purely protective. Now the bastion is an excellent observation deck, with which offers stunning views of the harbor. Current building built in the 19th century and consists of a wide open terrace as well ornate facade. 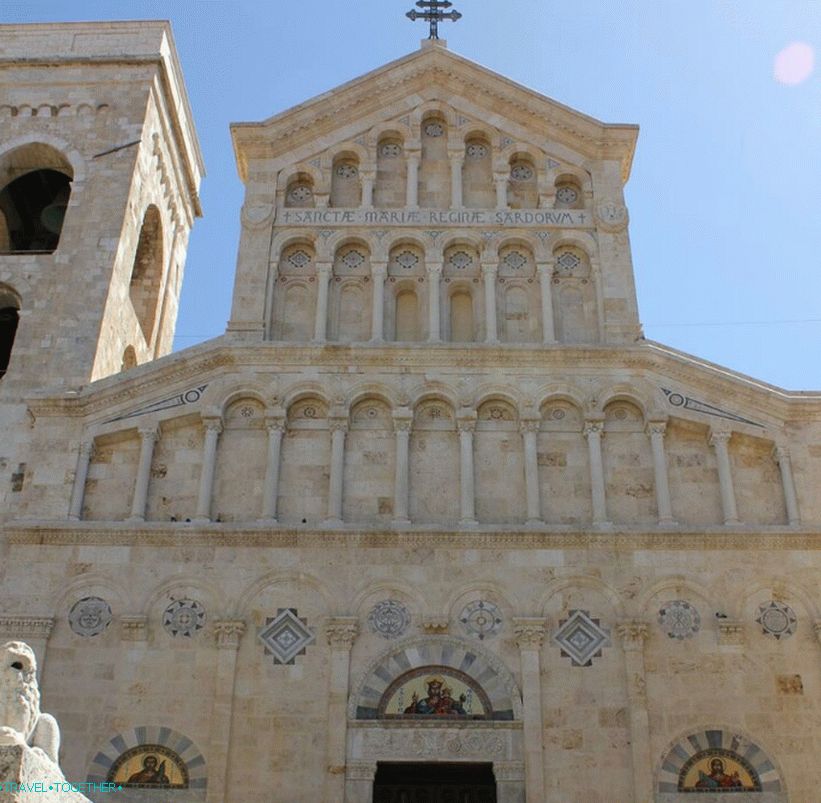 The Duomo – an impressive cathedral, located in the center Castello. It is a monumental Romanesque building with magnificent baroque facade. The construction of the Duomo began at 13 century, and served as a model for him the cathedral in Pisa. 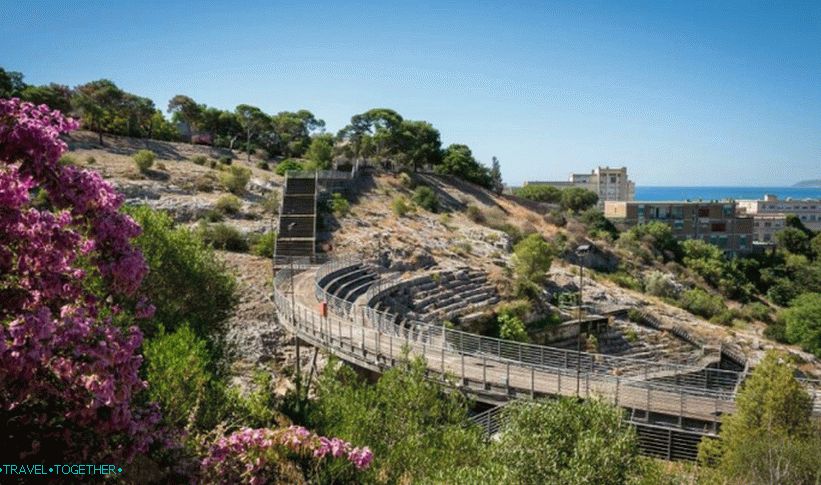 The Roman Theater is a magnificent monument of Antiquity, which is a witness to the ancient history of Cagliari. The theater was built in the end of the 1st century AD. 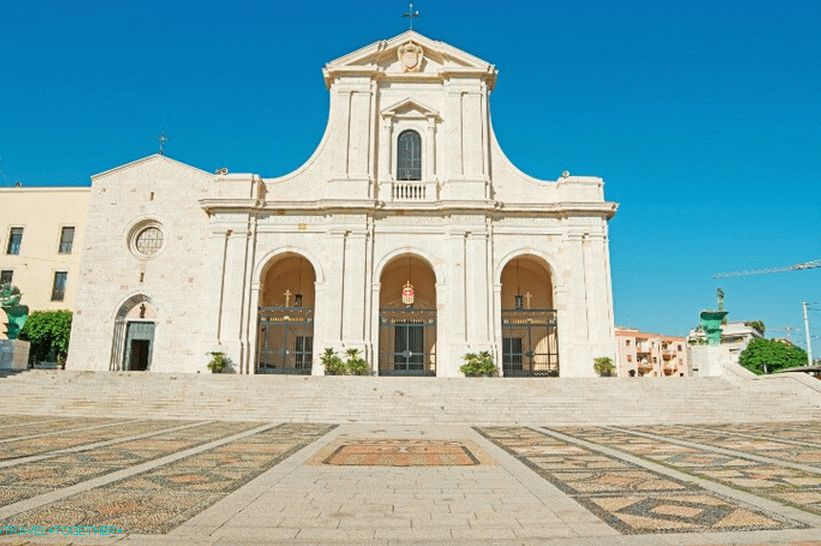 Santuario di Bonaria – beautiful basilica dedicated to the Virgin Mary’s The building has three ornate arched doorways that lead to large open foyer. A small gothic church was here built in the 14th century. The current neoclassical basilica dates from 18 a century. 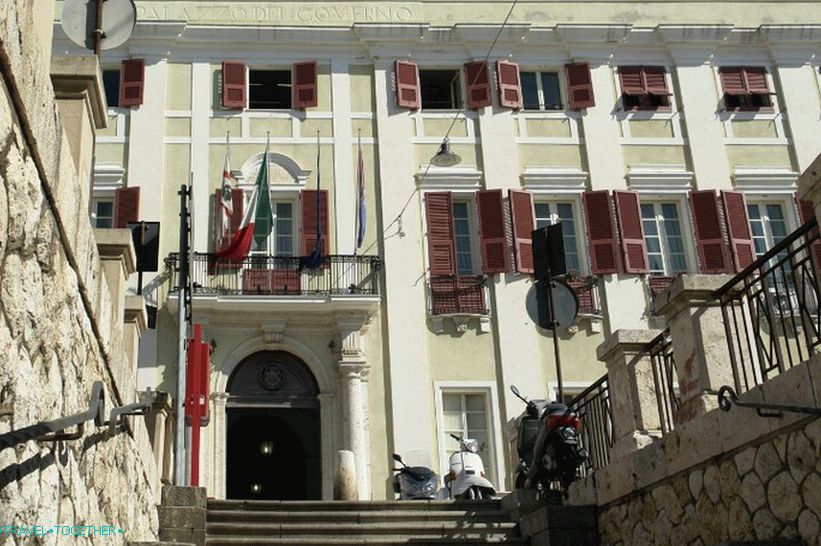 Palazzo Regio – one of the most important historical buildings Cagliari, which served as the official residence of the kings of Sardinia. The modern facade is the result of a reconstruction carried out in 19th century. 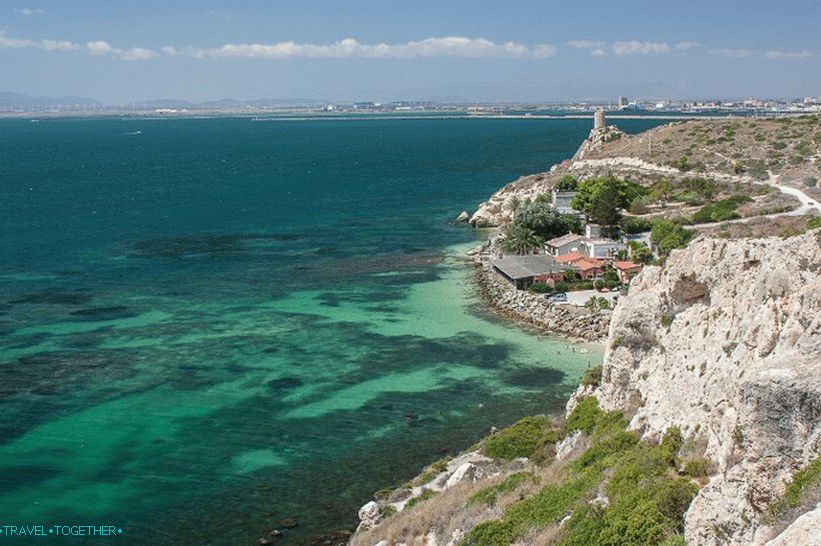 Kalamoska is a small but beautiful and quiet beach located in south of Cagliari (behind the port). It is famous for the crystal clear sea and beautiful limestone cliffs.

Cagliari on the map of Italy