Cadiz (Spain) – the most detailed information about the city with photos. The main attractions of Cadiz with descriptions, guidebooks and cards.

Cadiz is a city in southern Spain in the Andalusia region. Considered The most ancient city of Western Europe and the starting point for the voyages of Christopher Columbus. Cadiz – the pearl of the Costa de la Luz (Shores of Light) offering wonderful Mediterranean atmosphere, a large number of historical and cultural monuments, endless beaches and beautiful seascapes. The city was founded Phoenicians more than three thousand years ago and still is one from the largest ports of Spain. Cadiz is a great starting point for exploring the resorts of the Costa de la Luz and the entire southwest Andalusia. 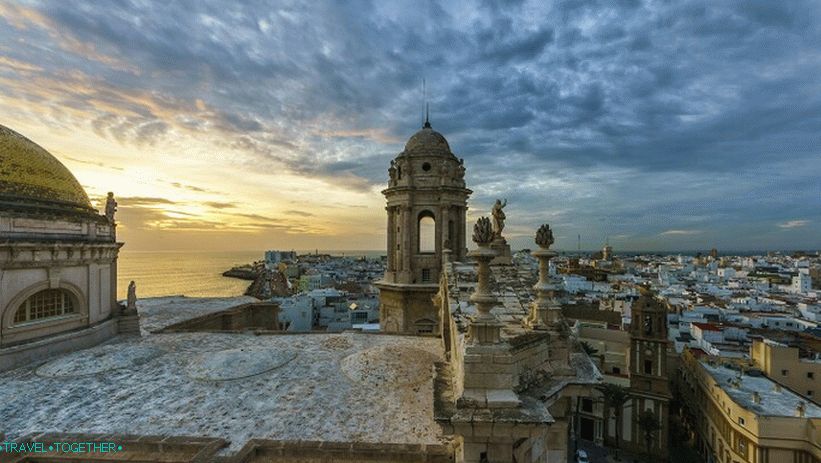 Cadiz is located in the southwestern part of Spain. Most territories occupied by swamps, salt marshes and sandy beaches. Climate – soft subtropical. The average annual temperature is 18.6 ° C. Summer roast. The winter is very mild with an average temperature of the coldest month about 10 degrees.

Beautiful beaches and mild Mediterranean climate make Cadiz one of the most popular resorts in Spain. Unlike most of the Spanish resorts beaches are not oversaturated infrastructure and hotels (especially high-rise). In historical the center the most popular beach in the bay of la caleta is Playa de la Caleta. The beach is marked with a blue flag. Also in this The bay has a small stretch of coastline of Playa de La Palma. A little away from the center is the beach Playa de Santa Maria del Mar, which is a long plot of the sandy coast. Next comes Playa de la Victoria with elegant promenade. The largest beach of Cadiz – Playa de la Cortadura. 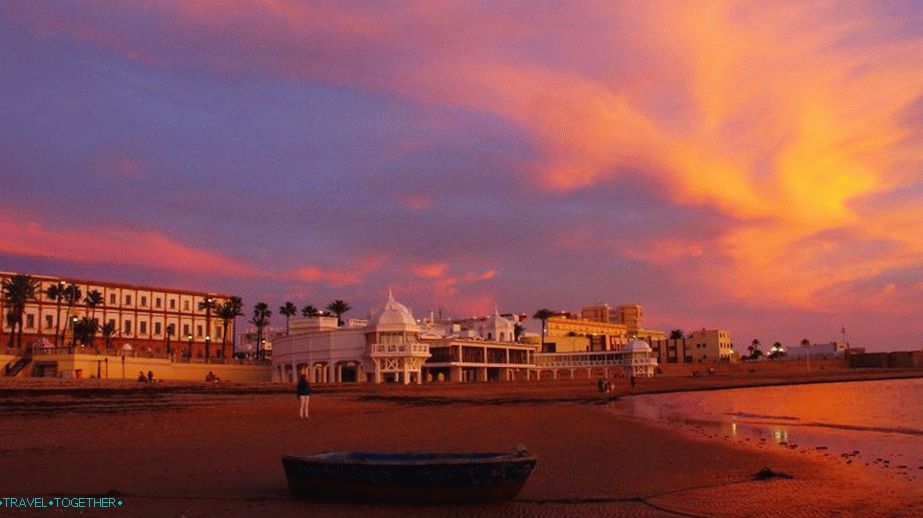 La Caleta Bay – a bay on the west side of the historic center. This is a place of great historical importance, since Phoenicians, Carthaginians and Romans moored their ships in this natural harbor. Today on the north side of the bay moor boats and yachts. 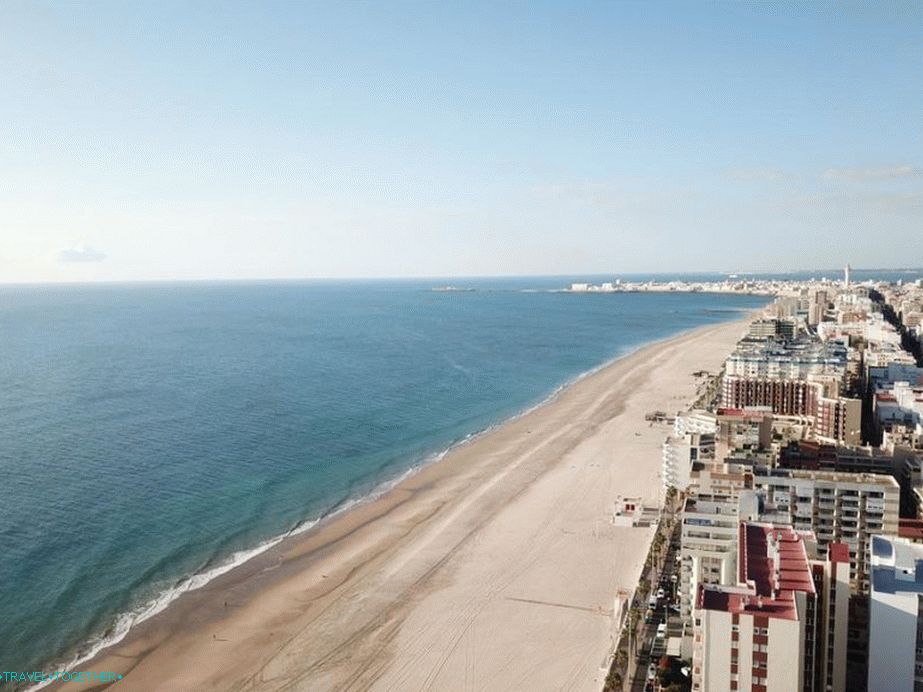 Playa de la Victoria is considered one of the best city beaches Europe and Spain. It is more than 2 kilometers of sandy coast with beautiful promenade Paseo Maritimo.

Cadiz, like the whole Costa de la Luz, are part of Atlantic Ocean. Water is even cooler in summer Mediterranean Sea. 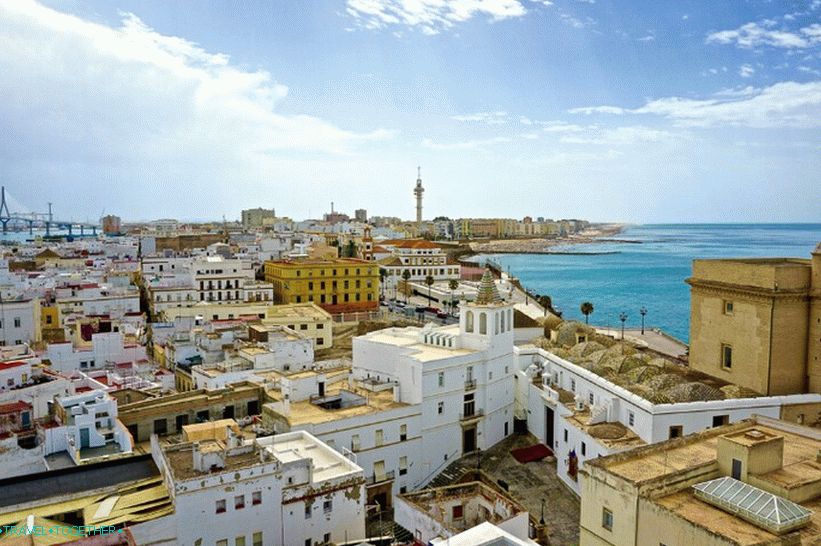 The best time to visit Cadiz is April-June and September October. It’s pretty hot in the summer. 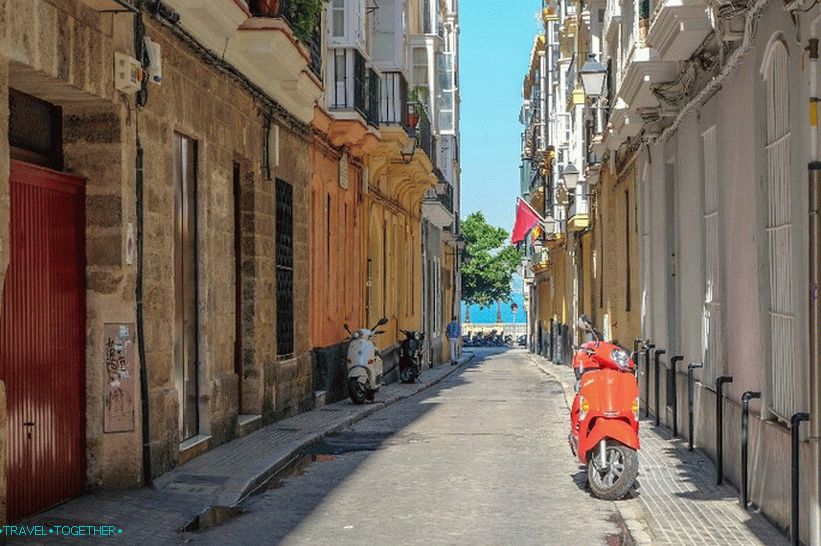 Cadiz was founded by the Phoenicians in 1100 BC. is he It is considered the oldest permanently populated city in Western Europe. The Phoenicians called the city Gader. After a while the city was conquered by the Romans, in which he achieved prosperity and was one of the largest cities of the Roman Empire. The Romans called the city Hades. They built an amphitheater and aqueducts here. 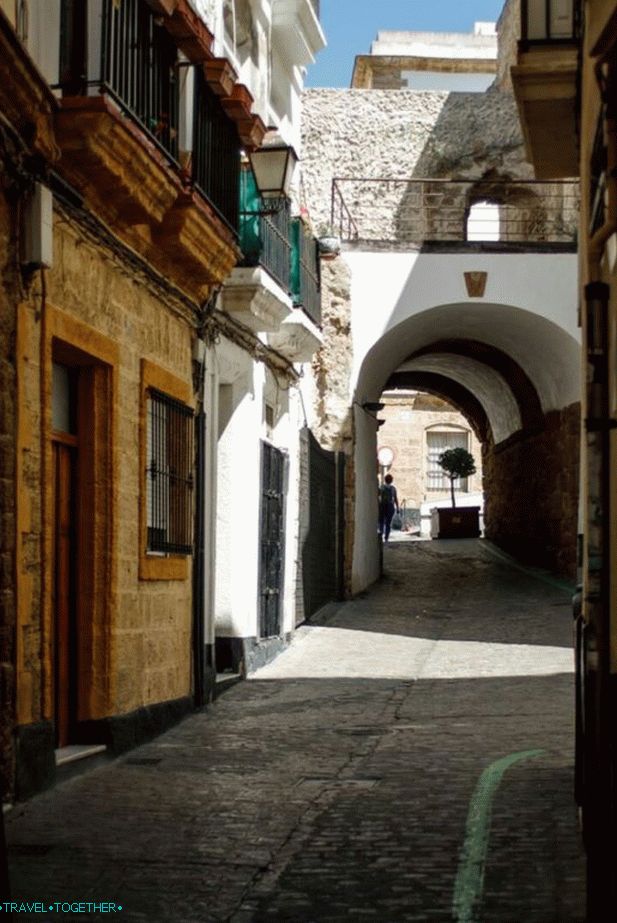 After graduating from the Reconquista, Cadiz became the gateway to the New World. Most of the expeditions to America started from here. And from the neighboring port went to his voyages Christopher Columbus. After strong earthquake in 1755, which destroyed 1/3 of the city, Cadiz’s prosperity faded away.

Interestingly, during the Napoleonic wars, the French never took the city.

In 1868, an uprising of Admiral Topeto’s squadron began here, which led to the abdication of Isabella II. True already two years later, Spain returned to the monarchy.

The nearest airport is Jerez de la Frontera. Located at 35 minutes away about Cadiz. You can get from the airport to the city by bus or train. There are several daily flights to Madrid, Barcelona, ​​London, Frankfurt. The larger airport is in Seville

Cadiz is a major transportation hub of Andalusia. Therefore get here by train or bus from Madrid, Barcelona, ​​Seville and other large cities is not difficult. 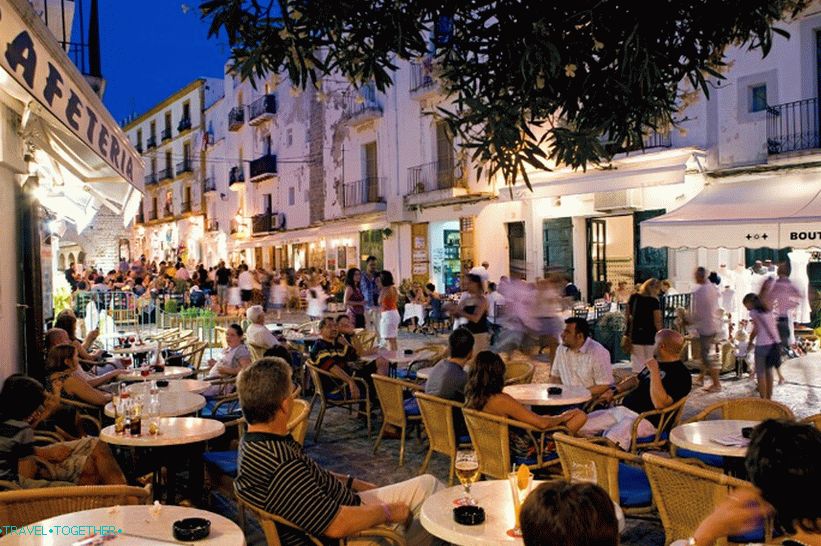 In historical the center of Cadiz

The cuisine of Cadiz is famous throughout Andalusia. Seafood and nature in combined with excellent wines will turn your journey into delightful gastronomic experience. In Cadiz, definitely worth it try fish and seafood, game that is harvested in the mountain terrain, pastries and sweets.

In the old town of Cadiz you can find sights of the period. Antiquity and Middle Ages, enjoy the beautiful Mediterranean landscapes strolling along the embankments that located north of the Plaza of Spain.

The picturesque Alameda de Apodaca is a charming promenade with palm trees and old street lanterns. Is one of the most Popular places for evening promenades. In the northwest the city is the largest and most beautiful park of Cadiz – Genove (Genovés). 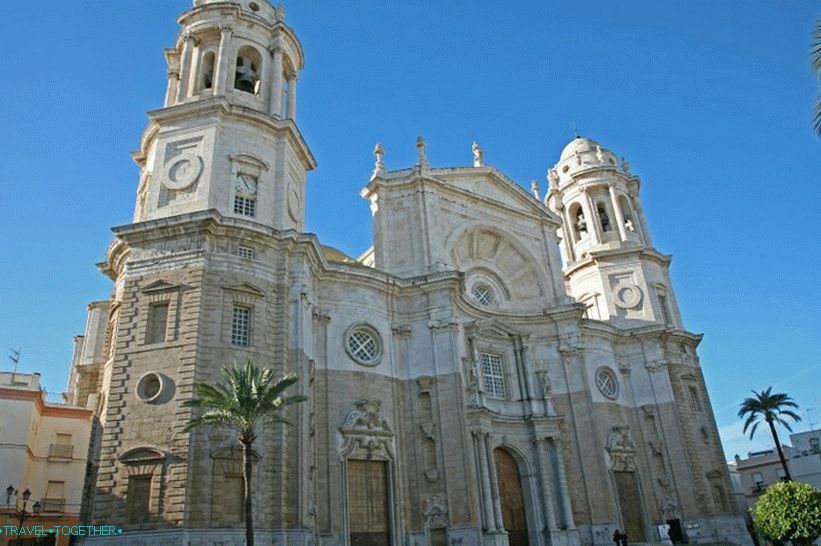 Cathedral Nueva (New Cathedral) – Cathedral in style baroque. It was built in the 18th century. Gorgeous gilded dome is one of the symbols of Cadiz. It has a diameter of 52 meters and reminds architecture of the dome of the Pantheon in Rome. Highly impressive interior and size of the church. 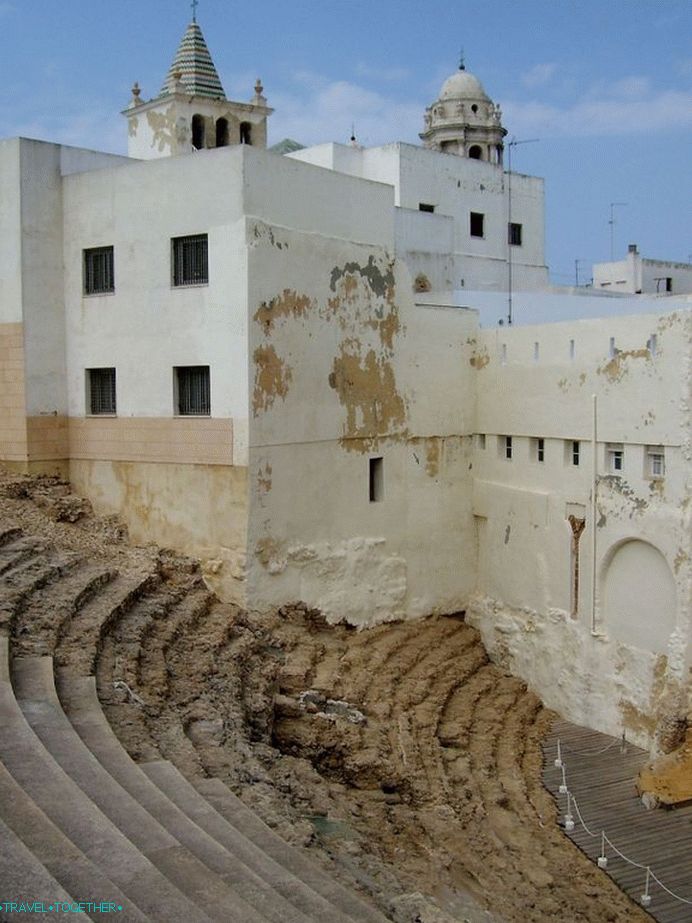 El Populo is the oldest district of Cadiz. It was founded in the era the Romans. Here are the ruins of an ancient Roman theater of the 1st century before ad. 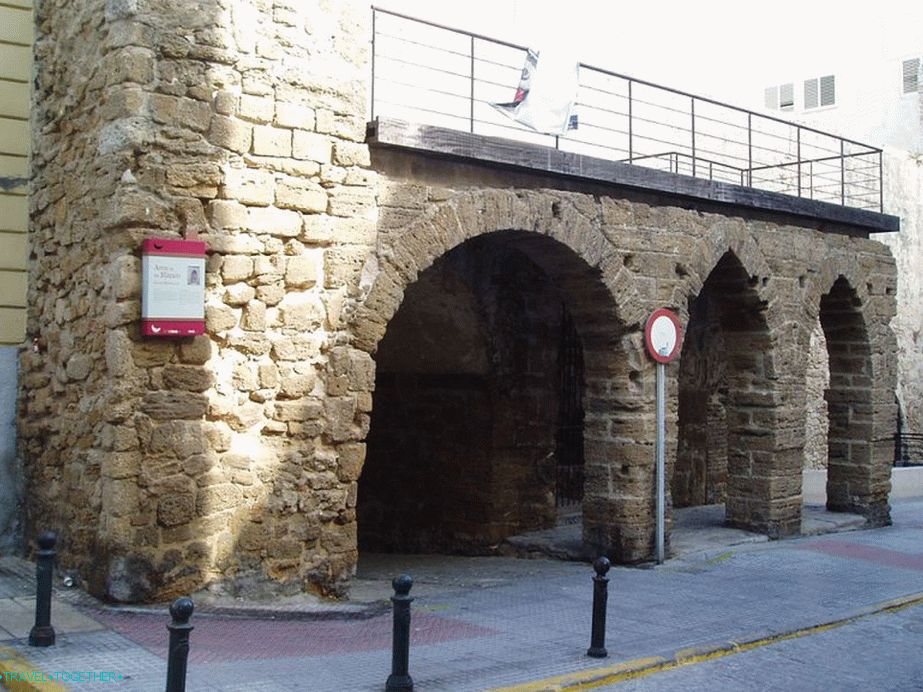 El Populo is a district of narrow cobblestone streets and impressive palaces. The medieval gateway of Arcos de los Banco – the ancient entrance to Cadiz. The gate was built by King Alfonso X in the 13th century. Rosario is home to the Church of Santa Cueva, in which Goya’s masterpieces are presented. 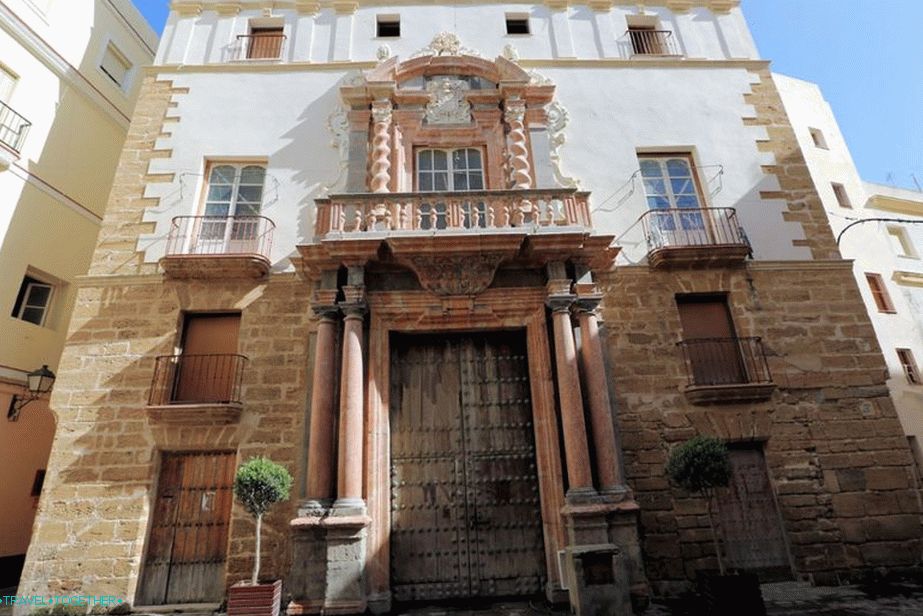 Casa del Almirante – one of the most interesting palaces of El Popolo. 17th century building with spectacular gates and a beautiful facade. from Italian marble. The main square of the historic center is the Plaza de San Juan de Dios. Also worth a visit atmospheric city squares of Toptete and San Martin. 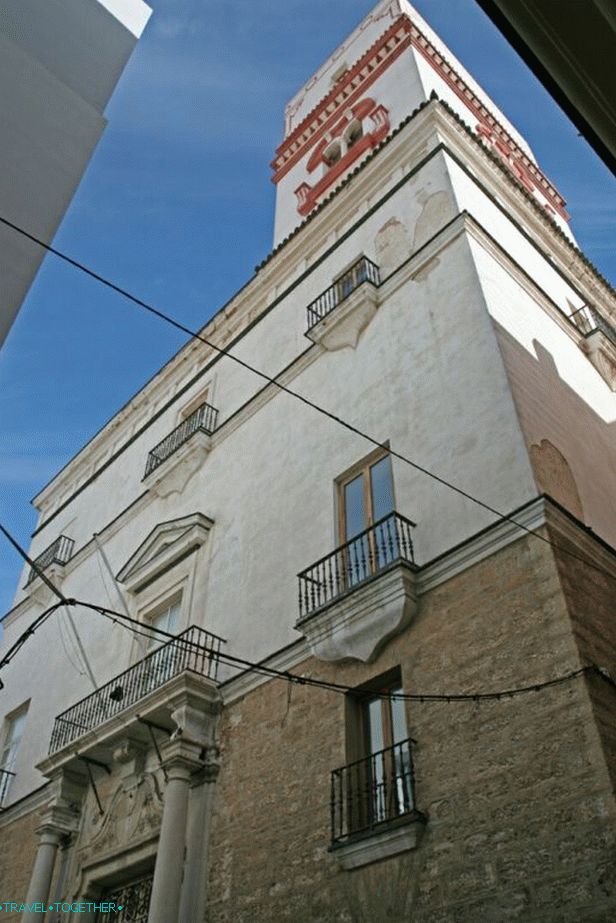 The Tavira Watchtower was built at the end of the 18th century and is the highest point of the historical center (45 m). On the summit is a terrace with a beautiful view of Cadiz. To climb upstairs you need to overcome 170 steps.

Interestingly, there used to be 129 sentinel in Cadiz towers 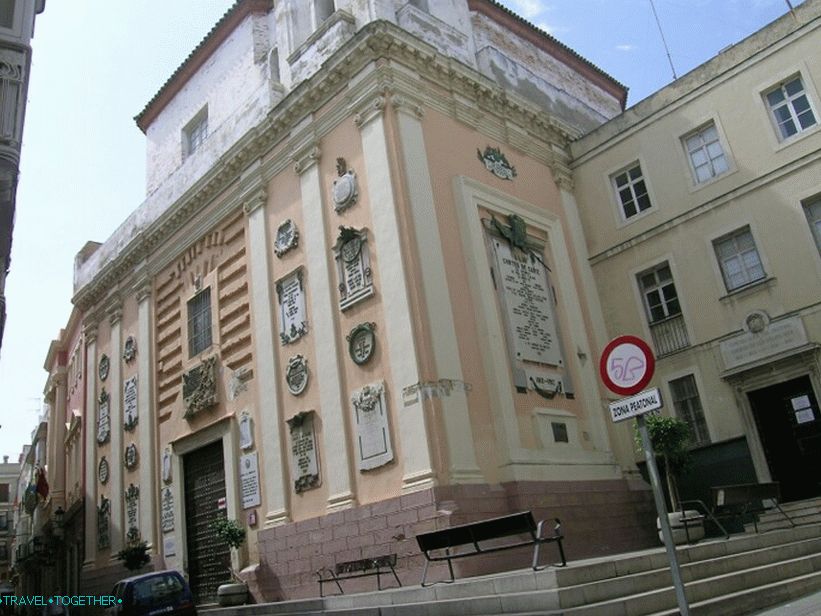 San Felipe Chapel – a small religious building to the north from Torre del Vigia. The chapel was built in the 17th century. 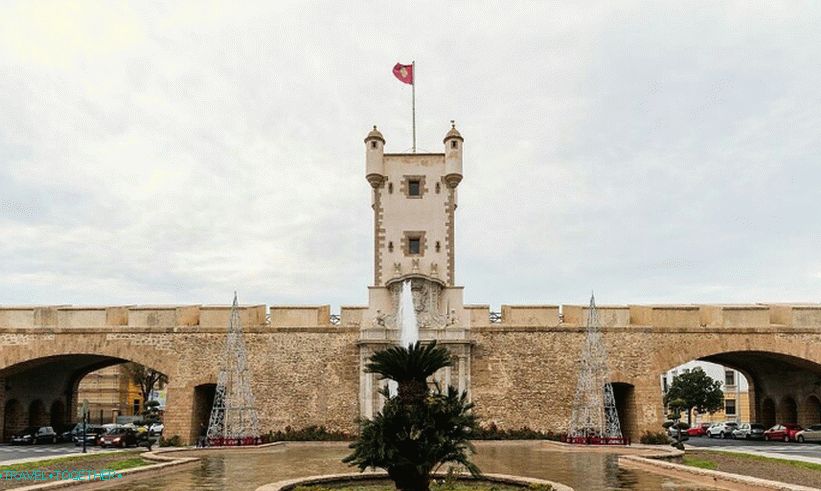 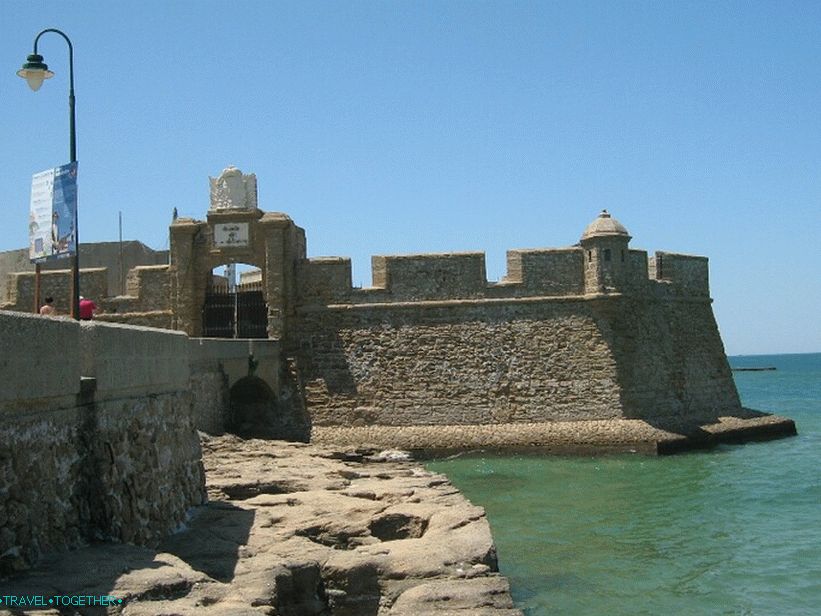 San Sebastian Castle is an 18th century fortress located on northwestern outskirts of the city. Most of its history was used as a prison.

Cadiz on the map of Spain