Berlin (Germany) – the most detailed information about the city with photos. The main attractions of Berlin with a description, guides and cards.

Berlin is the capital of Germany and its largest city with a population more than 3 million people. Located in the eastern part of the country, 70 km from the border with Poland. Berlin is a large metropolis, city diverse architecture, museums and palaces interesting attractions and lively nightlife. Despite the destruction of World War II, post-war separation Berlin Wall, Berlin restored not only its appearance and status, but also became a symbolic city of modern Germany.

Berlin is a bit like a quilt. Here you can see attractions of different historical periods: from a few preserved medieval buildings near Alexanderplatz to ultra-modern metal structures on Potsdamer Platz. It is a city of stunning architectural and cultural diversity, the study of which you can spend months. 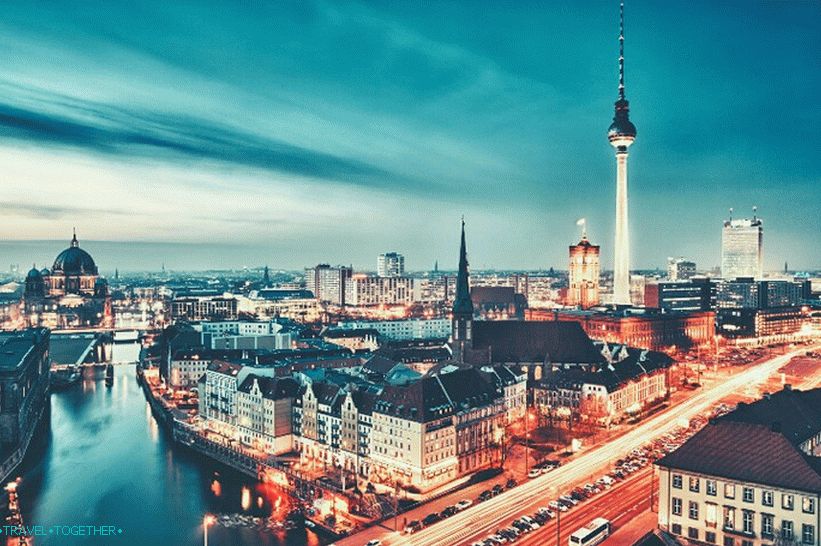 Berlin is located in the east of Germany on the banks of the river Spree. near the border with Poland. The city is located in a valley, formed by glaciers between moraine hills.

The climate of Berlin is temperate, combining some features in the village sea ​​and continental. Average annual temperature 9-10 degrees About 600 mm of precipitation falls annually. Warmest months July and August with an average temperature of 18-20 degrees. The coldest the month of January with temperatures around zero. Snow cover non-permanent, winter is mild enough. Mostly dominated westerly winds.

Berlin has been multicultural since ancient times. Back in the pre-Christian era German, Frankish and Slavic tribes lived on its territory. Berlin is a young city by European standards. He arose in the early 14th century as a result of the unification of the town of Cologne, located on the island of the river Spree, and the town of Berlin, on its east bank. These settlements are mentioned in the first half. 13th century. Interestingly, until the 17th century, Berlin was a small city with population of about 10,000 inhabitants.

According to the most common version, the name of the city derived from the West Slavic word “berl”, which means bear. The bear is also a symbol of Berlin almost from the time of its grounds. 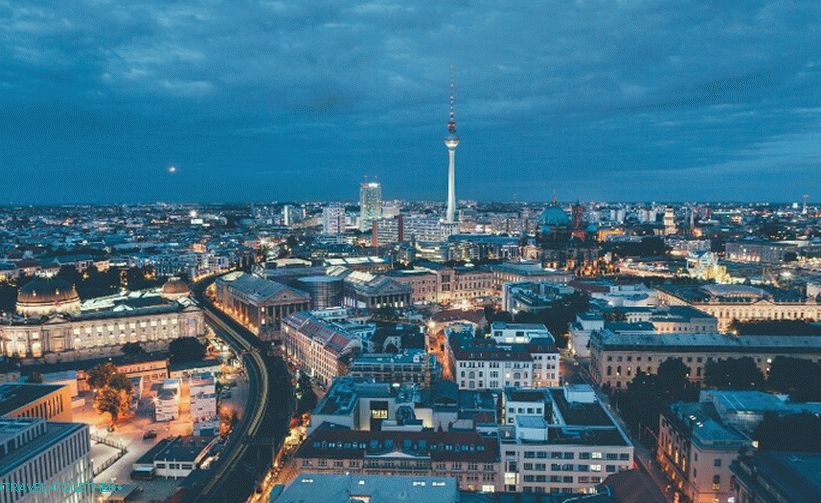 As a result of the Thirty Years War in the 17th century, Berlin lost about half of its population. In 1701, after the coronation of Frederick I Berlin became the capital of Prussia. In 1760 the city was taken by the Russians. troops, in 1806 – the troops of Napoleon, in 1813 – Russian the troops entered Berlin again. In 1871 the city was proclaimed capital of the educated German Empire.

In 1919, after the First World War, Berlin became the capital Weimar Republic, and in 1933 – Nazi Germany. During World War II the city was severely destroyed. In the spring of 1945 Berlin was taken by the Red Army. After the war, the city was divided into 4 sectors: the Western Allied sectors (USA, Great Britain, a bit later France) and the eastern sector (USSR). The confrontation of the powers divided Berlin into two parts, and in the 60s GDR (East Germany) was built by the famous Berlin Wall. In 1989, the Berlin Wall was destroyed, and in 1991 Berlin again became the capital of the newly united Germany.

Berlin is an excellent transport accessibility and infrastructure. In the capital of Germany there are two operating airports. International Tegel Airport – the largest of them. It is a center of international and domestic air traffic. Buses connect this airport with main station and Alexanderplatz. Attention: Tegel Airport is not It has S-Bahn and U-Bahn stations. Tegel station refers to eponymous village. Another airport is Schönefeld, mainly is the center of low cost carriers. Currently in Berlin is building a new airport Berlin-Brandenburg named after Willy Brandt, which opens in 2018.

Berlin is surrounded by the A 10 motorway. The A 12 motorway connects the city with Frankfurt an der Oder and Warsaw, A 13 with Dresden and Prague, A 9 with Leipzig and Munich, A 2 with Hanover and Dortmund, A 24 with Hamburg. 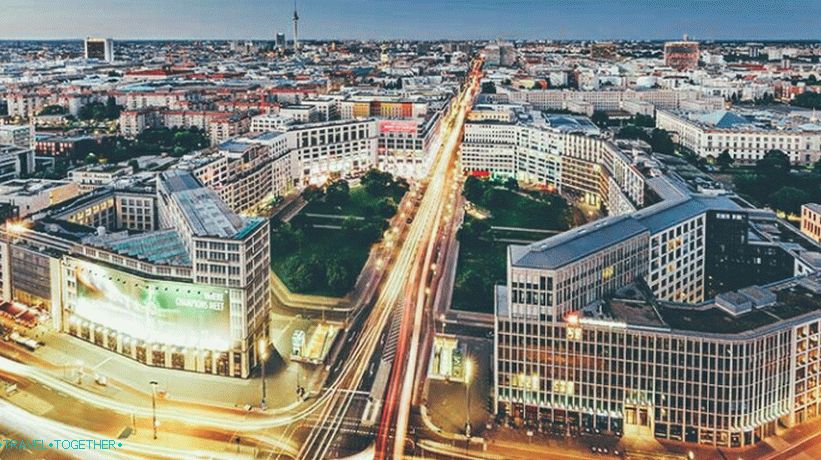 Movement around the city

Berlin is a huge city. To move you need to use well-developed public transport: buses, trams, trains and subway. Taxi services are also slightly cheaper than in many others. major cities of Central Europe.

In Berlin, the zonal system is used, but you hardly will have to go beyond zones A and B, with the exception of trips to Potsdam or to the airport. In public transport used common ticket. The standard ticket is valid 2 hours after validation. There is a cheap ticket that operates three stops U-Bahn or S-Bahn. Each ticket must be stamped on a special device (for date and time stamping). Trams mostly go in East Berlin. 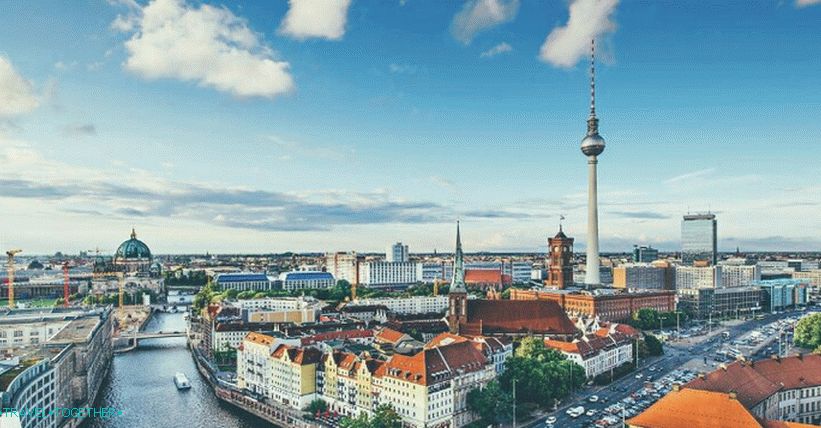 Berlin is a major gastronomic center: expensive restaurants, cozy cafes and bars, noisy and fun clubs, public points power supply. From food it is worth trying pfannkuchen (donuts), currywurst (sausage with curry), döner (bread with salad and meat). Food in Berlin incredibly cheap compared to any other Western capital Europe or other cities in Germany. Here is the kitchen different cultures, although it is often modified according to German tastes.

One of the main tourist areas for food is Hackescher Markt / Oranienburger Straße, Kastanienallee. Tip it is accepted to leave at a rate of 5-10% of the total bill.

Berlin is one of the shopping centers in Europe. Main trading areas: 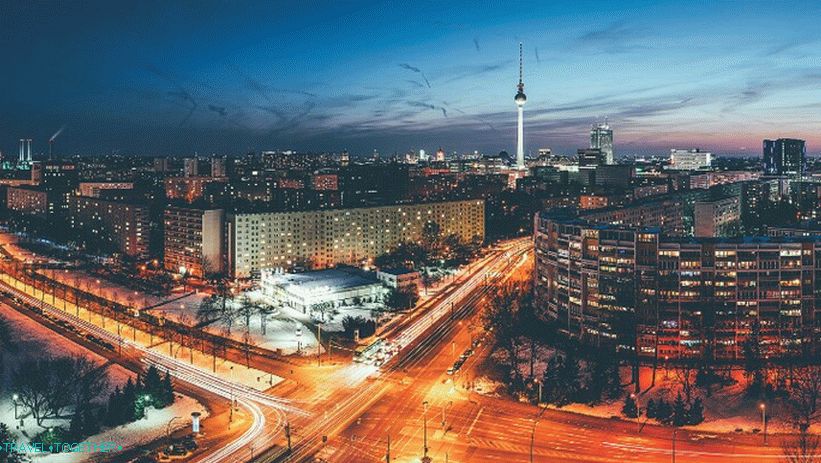 Berlin is a city of museums. There are more than fifty different museums and galleries. Most of them are paid. If you are planning devote a lot of time to museums, we recommend buying a special Museum three-day card for 24 euros. She gives the opportunity for three days visit the exhibition of almost all the museums of Berlin. Attention: museums usually closed on monday.

The most interesting museums of Berlin:

Museum Island – one of the largest and most famous museum complexes of Europe. As part of the ensemble of the museum island stand out:

The Cultural Forum is another museum complex located near the Postdam square. Among its museums we recommend: 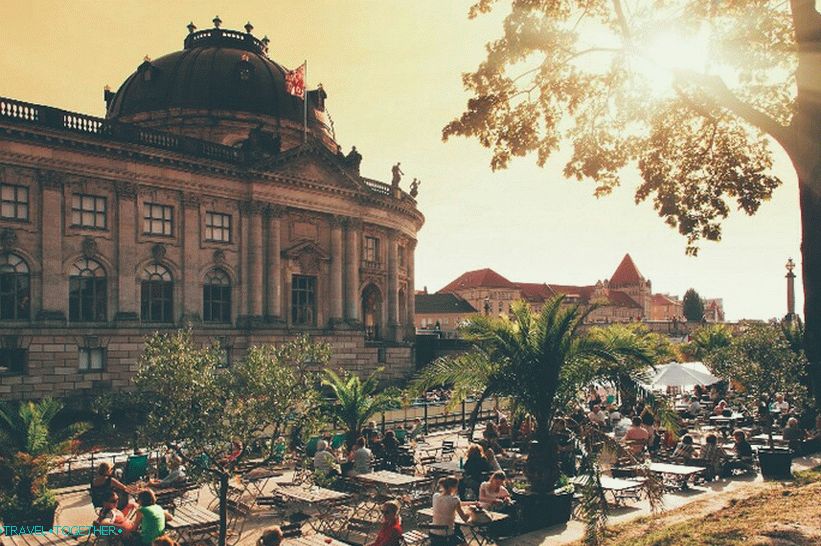 Berlin is a city rich in sights and beautiful architecture, despite the fact that there are not many old buildings and historical monuments. 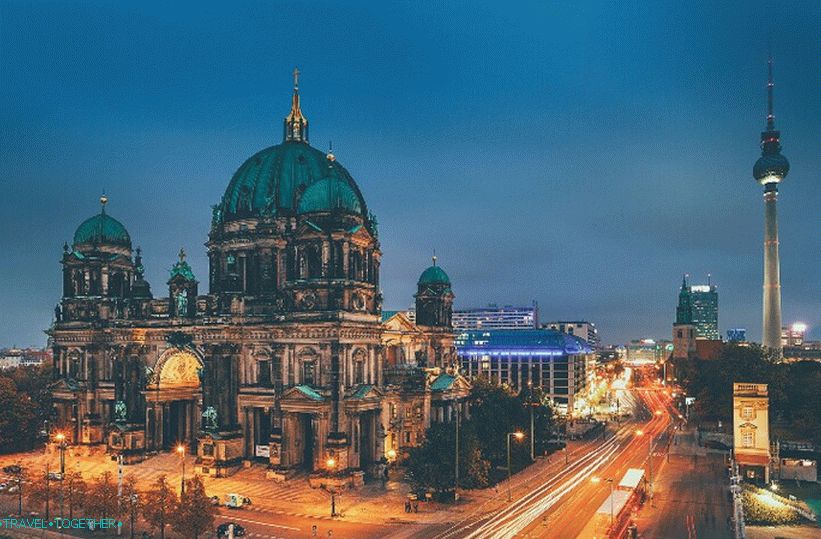 Berlin Cathedral is the largest and one of the most beautiful churches of Berlin. The cathedral is located near the Museum islands. Built in the 19th century and is a symbol of the greatness of the Germanic empire. For 7 euros you can climb the dome and enjoy wonderful view of Berlin. 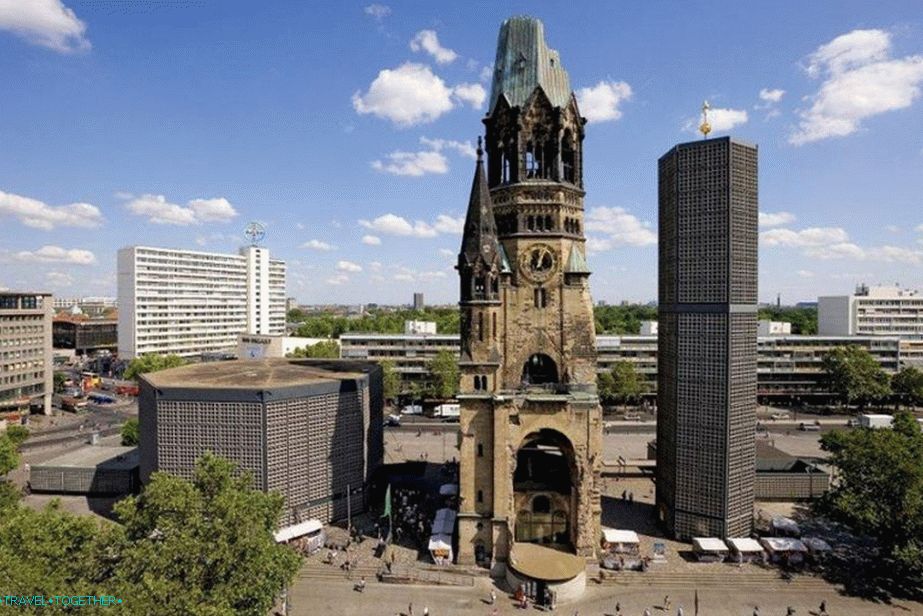 Kaiser Wilhelm Church – the ruins of a church built at the end 19th century. The remains of the high bell tower are located between two modern buildings and are reminders of World War II the war. 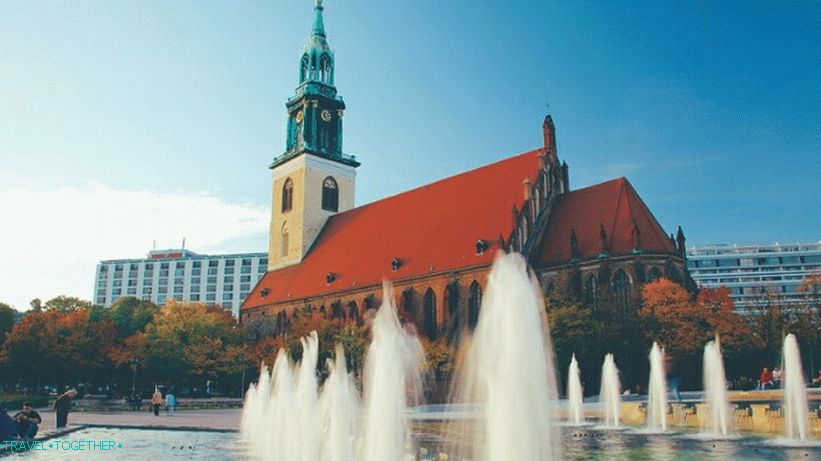 Church of sv. Mary’s in Berlin

Church of sv. Mary’s is one of the oldest churches in Berlin, located in the historic center near the square Alexanderplatz. The tower is 90 meters high among the religious buildings of the city. Entrance to the church is free. Inside contains many ancient pieces of art. 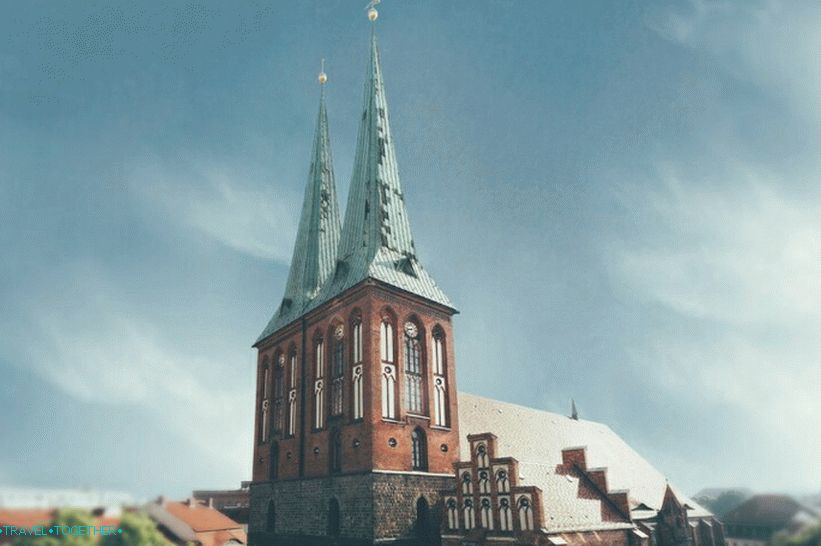 Church of sv. Nicholas – a brick Gothic church of the 13th century, The oldest religious building in Berlin. The height of the towers is 84 meters. It is interesting that now the building is not religious construction. This is one of the branches of the Brandenburg Museum.

Cathedral of sv. Hadwigi – 18th century catholic church in style Neoclassicism, significantly rebuilt in the 50s of the 20th century after destruction during World War II. 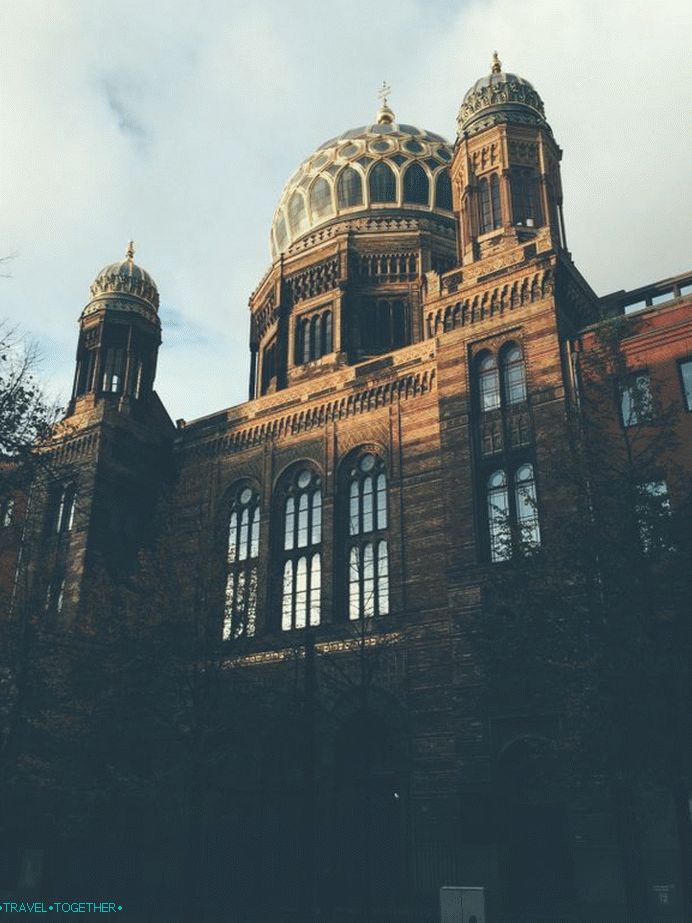 The new synagogue is a beautiful structure in the Moorish style, built in the 19th century. Jewish central religious building Berlin community.

In the eastern part of the historic center you can find ruins. Gothic Franciscan Abbey, destroyed in 1945 year

The main attractions of Berlin 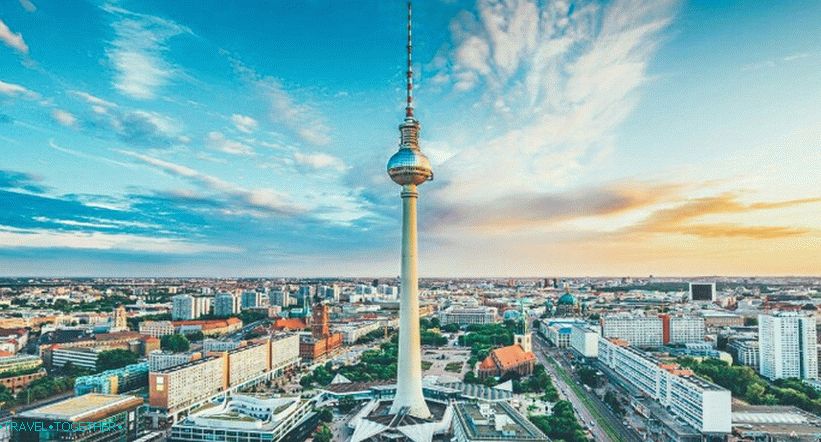 Berlin TV Tower – the highest building in Berlin and throughout Germany. The height of the tower is 386 meters. Located in historical center on Alexanderplatz. At a height of 204 meters there is an observation deck with a stunning panorama of Berlin.

The Reichstag Building (Bundestag) is the building of the German Parliament. The massive building of the end of the 19th century with a beautiful glass dome which offers a breathtaking view of Berlin. In 1945, our the troops hoisted the Victory Banner on him, which was one of the symbols feat of our people in the Great Patriotic War. 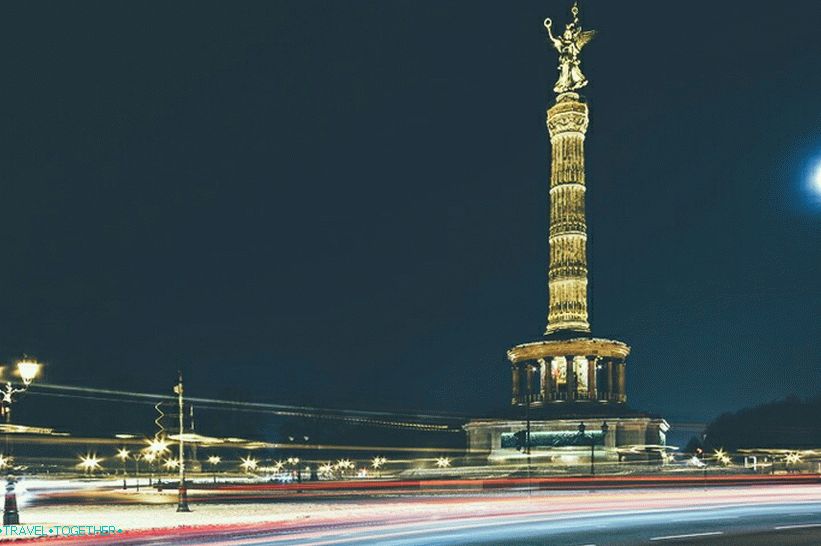 Victory Column – a monument with a height of 60 meters, built in second half of the 19th century. At the top is a panoramic observation deck. To get to it you need to overcome 285 steps.

A very popular viewing platform is the 100-meter tower. Kollhoff on Postdamer Platz. It has the fastest installed elevator europe. 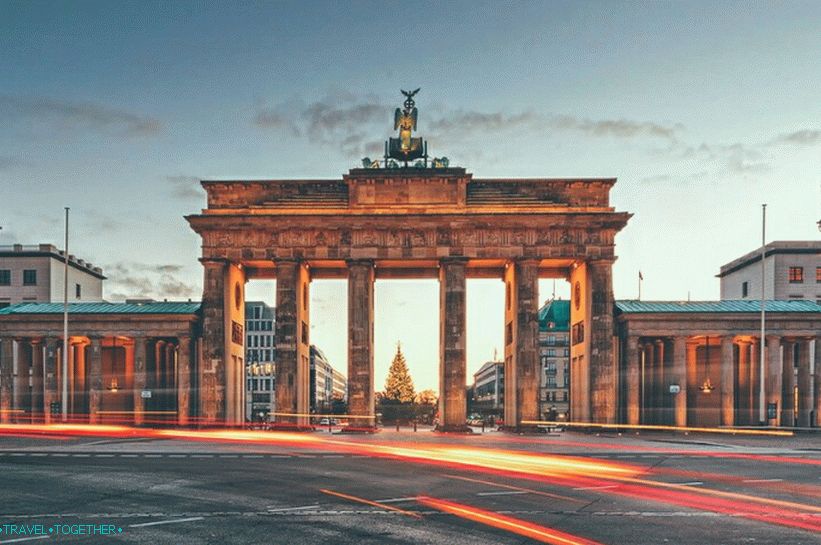 The Brandenburg Gate is a symbol of Berlin and one of its main attractions. Built in the late 18th century in style classicism. Are the only city gates of Berlin, which survived to this day. Located on Paris square. 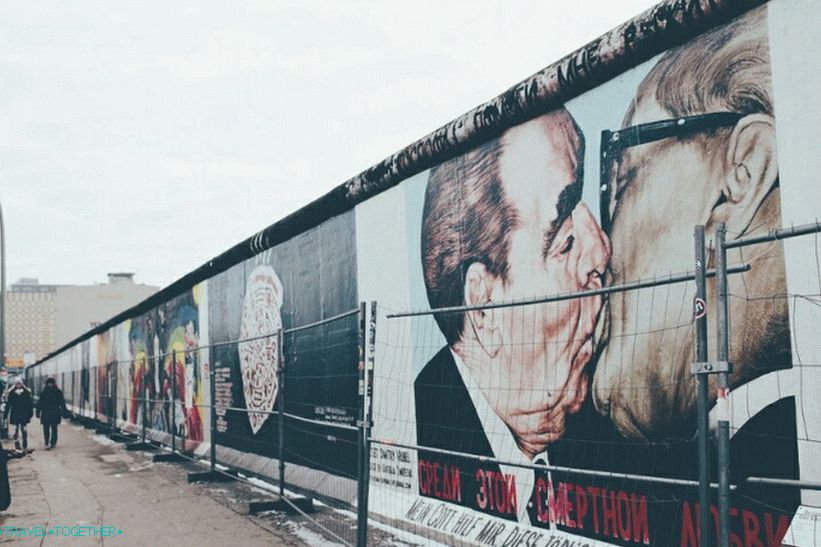 The Berlin Wall is one of the symbols of the Cold War. 155 kilometer fence, which divided Berlin into two parts: east and west. It was built in the 60s of the 20th century by GDR initiative. The Berlin Wall was dismantled in 1989. A large section of the wall is preserved in the eastern part of the city along the River Spree. 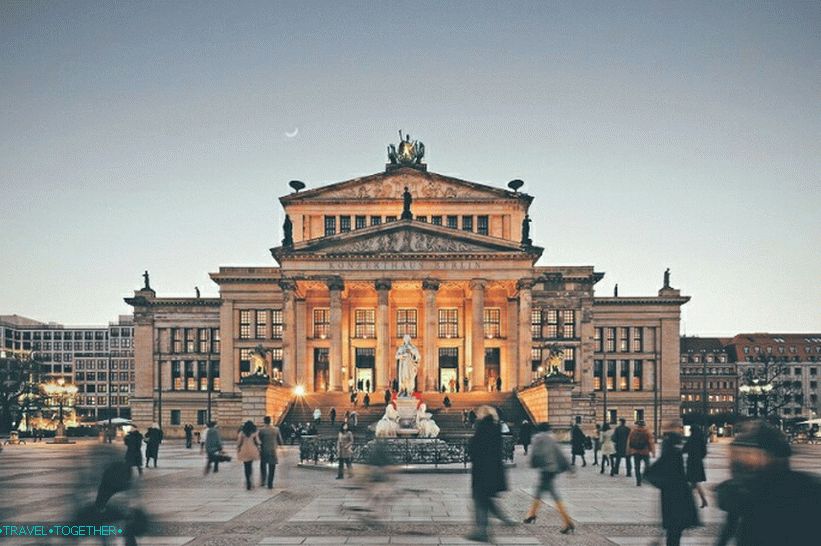 The Berlin Opera is one of the oldest and largest musical theaters of Germany, founded in the mid 18th century. 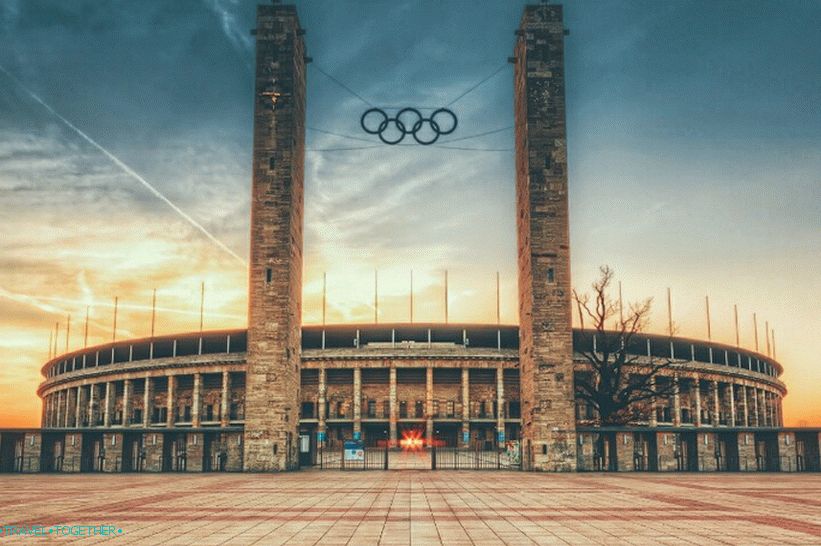 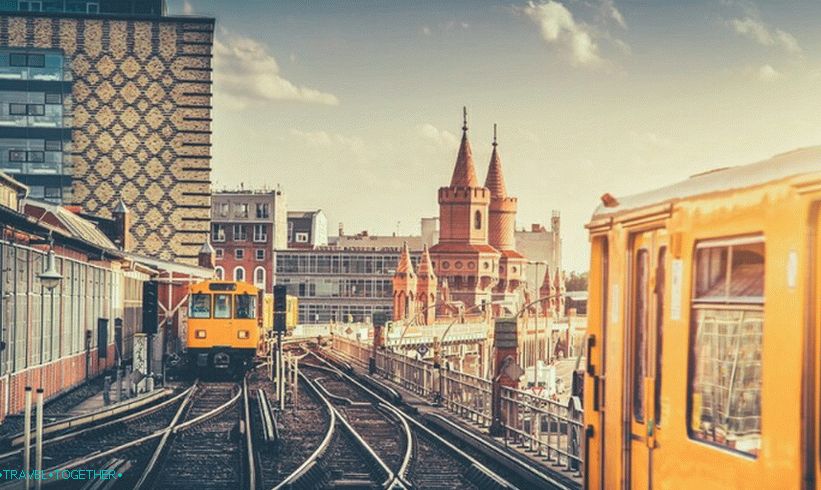 Alexanderplatz has one of the most beautiful and oldest of the fountains of Berlin – the fountain of Neptune. This is a large granite fountain with interesting sculptural composition.

Nearby is the building of the Red Town Hall. This is a historical the red brick building was built in the second half 19 century in an interesting mix of Gothic and Renaissance. Town Hall Tower Height is 74 meters.

Berlin on the map of Germany