Bergen, Norway: the most detailed information about the city of Bergen, main attractions with photo and description, location on map.

Bergen – a city in western Norway, located on the same peninsula on the North Sea. This is the second largest city. countries, the center of the region Hordaland, which is spread out in the environment picturesque hills and fjords. Bergen – one of the oldest cities Norway, the seaport and the ancient capital of the country. Here preserved Old wooden architecture and heritage of the Hanseatic period. The famous Bergen Embankment – Bryggen, is the most famous landmark of the city and listed UNESCO World Heritage Site. Bergen – a city of wonder charm. This is the place where the colorful houses climb on slopes where it almost always rains or mists hang where scenic nature is adjacent to the urban environment. More surprising find out that this cute city is one of the richest cities not at all poor in Norway, a major port and oil center industry. 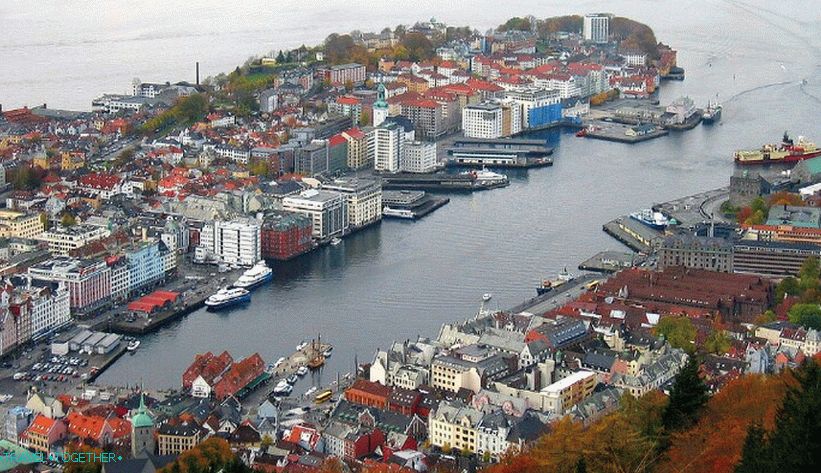 Bergen is located in Western Norway on the North Sea coast. The city lies in the valleys of the Bergen Peninsula, which overlook the by the sea. The surroundings of the city are quite mountainous. Coastline cut into picturesque fjords. The historic city center is located on the shores of the Vogen Bay. 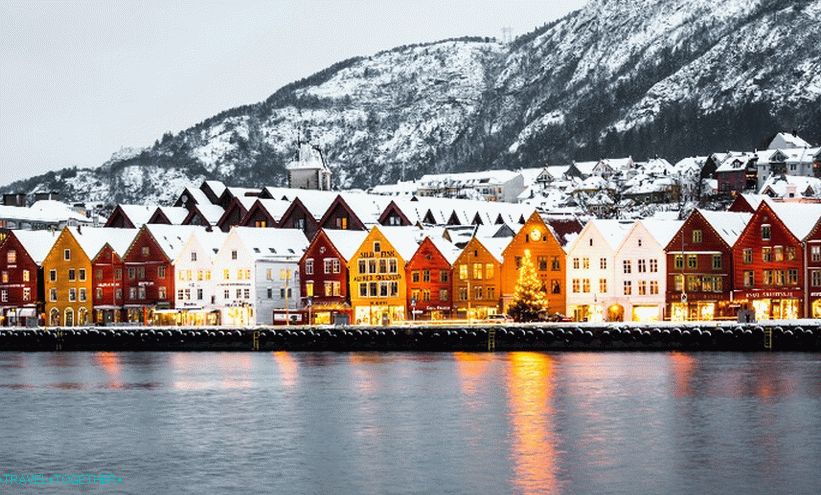 The climate is temperate marine. Despite the northern position, winter snowy and mild with an average temperature of 1-3 degrees with a sign plus, and the summer is cool with an average temperature of less than 15 degrees. During the year there is a very large amount of precipitation – more than 2000 mm. It is almost always overcast and rainy. Norwegians themselves joke that Bergenis can be recognized by webbed feet.

Interestingly, there are beaches in Bergen. Due to the fact that water Bergen Bay is separated from the cold waters of the North Sea by a multitude of islands, in the summer on serene days, water in shallow water can warm up to 18 degrees.

Bergen can be visited throughout the year. Winter is enough mild with an average temperature slightly above zero, and the summer is cool. AT a lot of precipitation falls throughout the year, so with probability 90% You need an umbrella.

Bergen was founded in 1070 by King Olaf III. Through several decades in the northern part of the Vogorsk bay was built castle bergenhus. From the 12th to the 13th century, Bergen was the capital of Norway, the residence of kings and bishops.

In the 14th century, the city ceased to be the capital and became part of the Hansa. Power was concentrated in the hands of the Hanseatic merchants. So it went on until the 18th century. Bergen at that time was one of the most important cities Hanseatic League, the largest and richest city in Norway. Exactly Hanseatic period, the city is obliged to the appearance of the Bryggen embankment. The main product was fish (mainly cod), and from Europe – the grain.

In the 15th century, Bergen was repeatedly raided by pirates, who managed not only to destroy the fortress, but also to burn part cities. In 1665, a large marine battle between england and holland.

Bergen remained the largest city in Norway until 1830. In during World War II the city was occupied by German troops and released in 1944.

By plane: the airport is located 20 km south of Bergen. AT The capital of Western Norway operates flights from Oslo, Copenhagen, Amsterdam, London, New York, Prague, Berlin, Paris, Edinburgh and other cities in Europe. It should be noted that a taxi to the center of Airport costs about 300 dollars. This, of course, is very expensive. Every 15 minutes there is a bus that is also quite dear. The ticket is valid for a return trip within a month. WITH 2017 from the airport there is a high-speed tram.

By train: the railway connects Bergen and Oslo. Way takes 7 hours and is very picturesque.

By car and bus: E16 motorway from Oslo. Buses to Bergen run from almost all major cities in Norway.

In the vicinity of Bergen there are several large shopping centers, and in the city you can also find large chain stores. Not the secret that Norway is one of the most expensive countries in the world, therefore shopping here is not the most common among tourists pastime. Basically, they buy traditional souvenirs, products of local artisans, rare things and different funny trinkets. 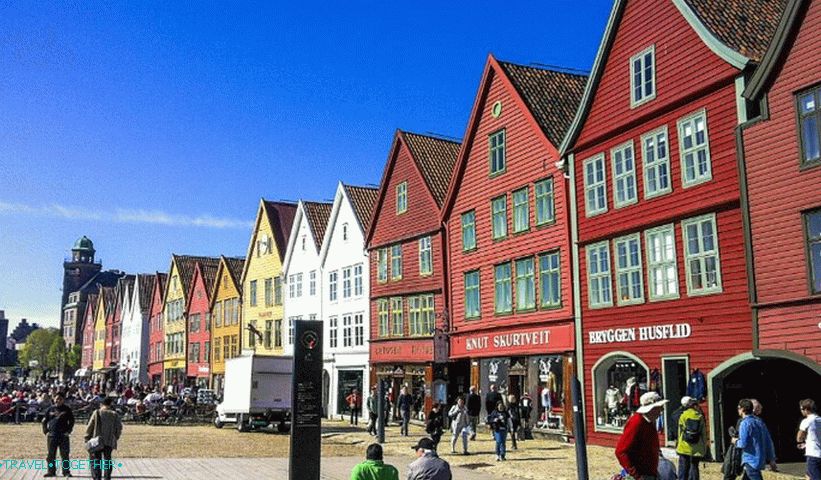 Food in Bergen dear. Lunch or dinner can easily get by in 100-150 dollars for two and up. To find cheap places need to really try. Most restaurants are very similar in kitchen plan and decoration. The kitchen usually works until 23.00.

To buy fresh fish and seafood we recommend to go on the fish market. Although it is worth noting that the prices here are also pretty high. A hike through the fish rows can easily result in an amount of 50-70 dollars per person. 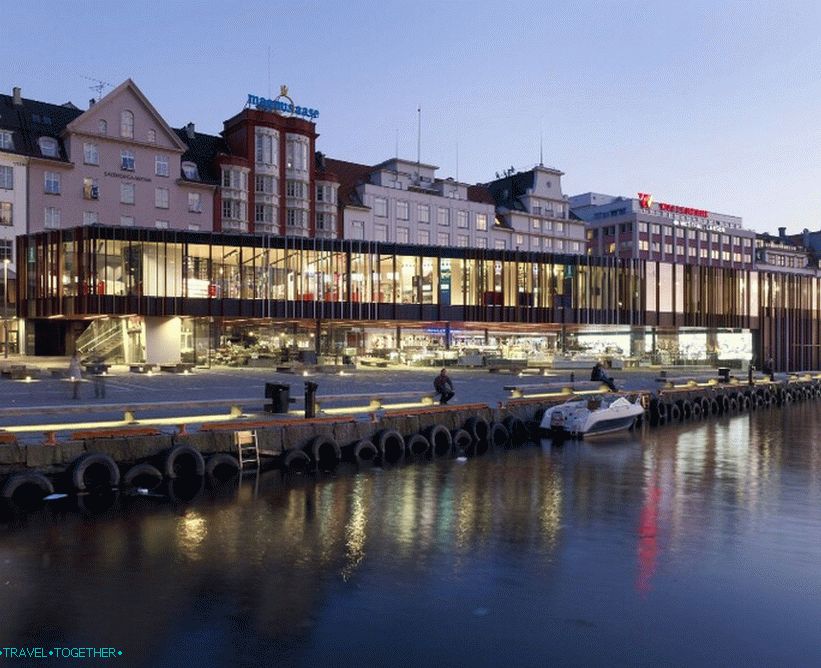 We recommend starting the sights of Bergen with his the symbol – the seafront Bryggen, which is listed as an object UNESCO World Heritage Site. Bryggen from Norwegian translates as pier, wharf. The embankment appeared in the Hanseatic period. it a very colorful place with antique colored wooden houses in which there are shops, museums, cafes and restaurants. Almost 25% of Bryggen buildings were built before the 18th century.

Funicular to the mountain Floyen

The old city museum is a complex of old wooden houses. open air. It is a mini-city of 50 buildings, reconstructed in the style of historical authenticity. it a unique place that lets you feel what life was like in Bergen two centuries ago.

Rosencrantz Tower – one of the main medieval Attractions Bergen, powerful stone tower, history which began in the 13th century. The modern look of the tower received during second half of the 16th century. Now it is located urban the museum. 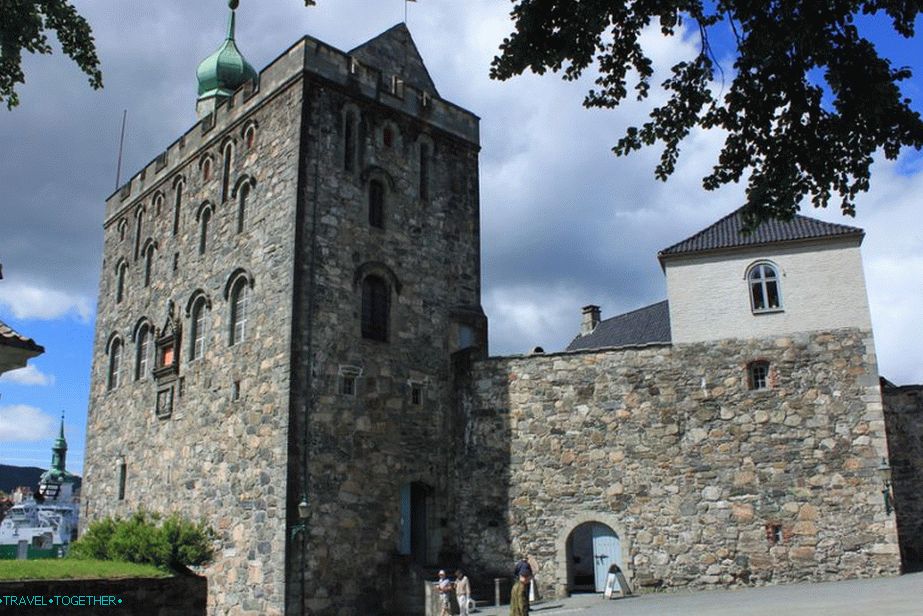 A very popular place is the highest peak of the surrounding area. – Mount Ulriken, on which the cable car is laid. From a height of 643 meters offers stunning views of Bergen, the bay and the fjords. 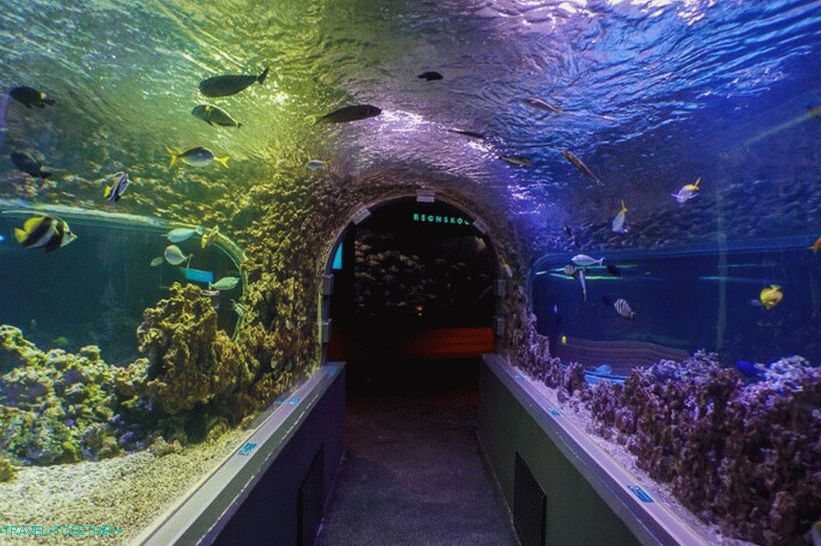 Bergen Aquarium – a great place for a family holiday. it more than 50 aquariums and reservoirs in which you can see the animal world of norwegian seas. Also has a large collection of tropical fish, marine mammals, penguins. 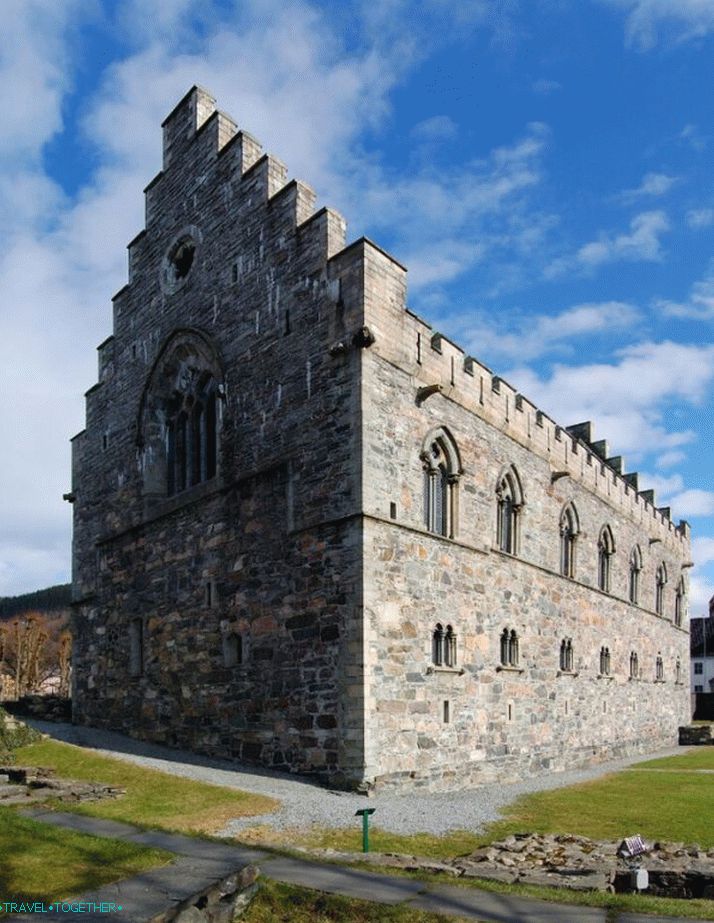 Bergenhus – a medieval fortress, one of the oldest buildings of Bergen and one of the oldest forts in Norway. Bergen The fortress was built in the 13th century and was royal residence. Some of its details are perfectly preserved, for example, Rosencrantz Tower and the Royal Hall (pictured). Royal Hall was built in the middle of the 13th century and is simply in excellent condition. Unfortunately, the rest of the fortress, including the old cathedral did not pass the test of time and now about them remind only ruins.

Gamleauden is a royal residence with a park built in early 20th century in English style. 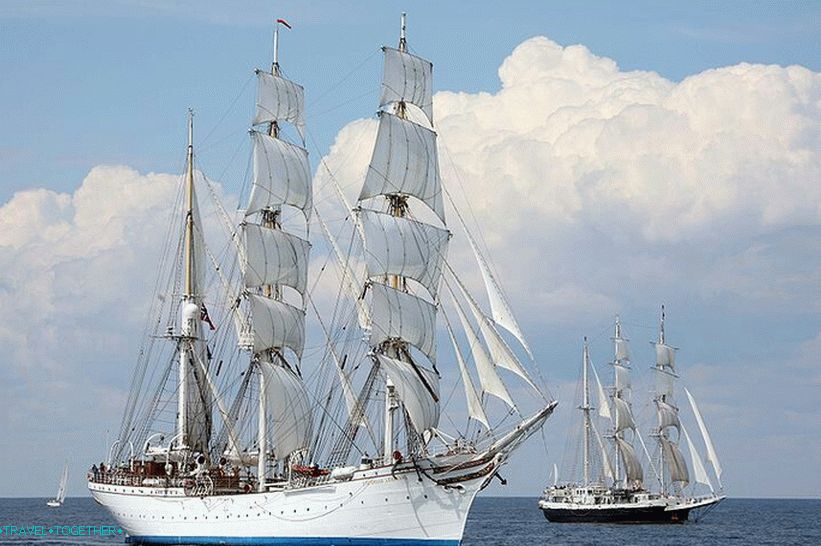 In the Vaughn bay it is often possible to notice a beautiful three-masted ship Statsraad Lehmkuhl, built in the early 20th century. Cruise on the Norwegian Seas this ship costs 425 NOK and takes 5 hours. 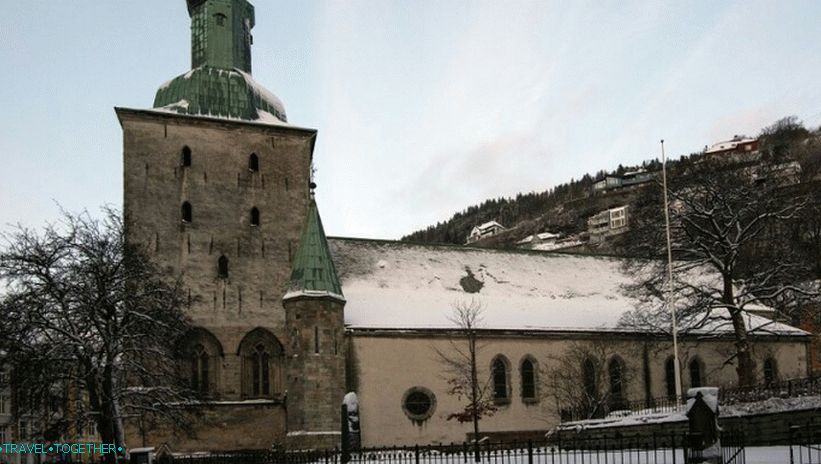 Bergen Cathedral – the main Lutheran temple of Bergen, located in the northwestern part of the historic center near from the seafront Bryggen. This is one of the oldest religious buildings. cities. The baroque temple is designed in the medieval style. First The church was built in the 12th century and was named after St. Olaf. Subsequently, the cathedral was rebuilt several times. 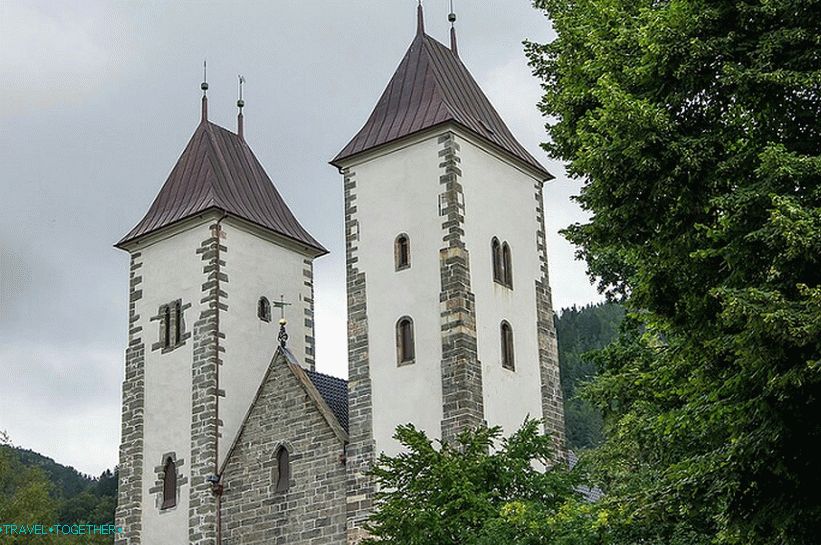 Church of sv. Mary is considered the oldest surviving building Bergen Belongs to the German community. Located in northeastern part of the historic center. Throughout almost four centuries was the main temple of merchants and merchants. 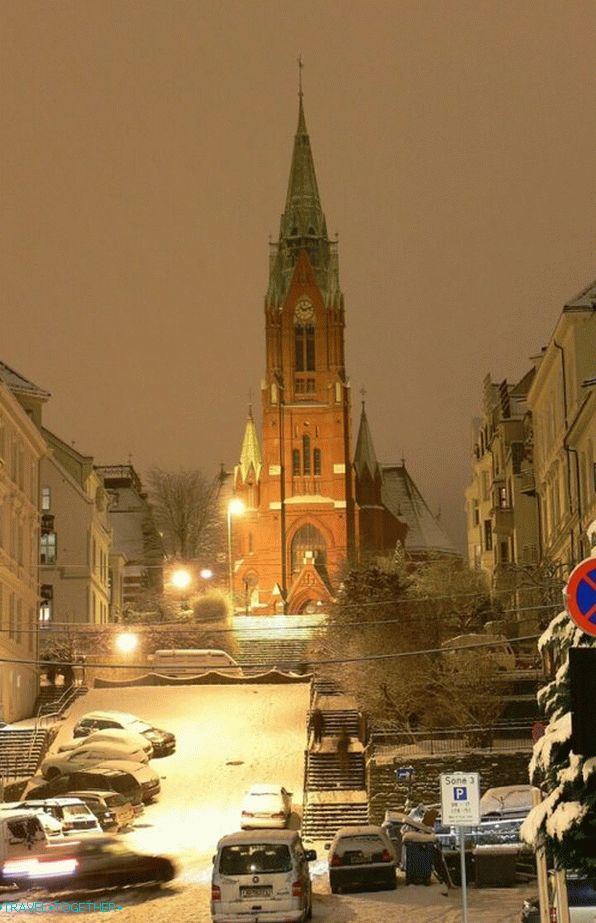 Church of sv. Johanna is a brick neo-gothic church of the end 19 century. 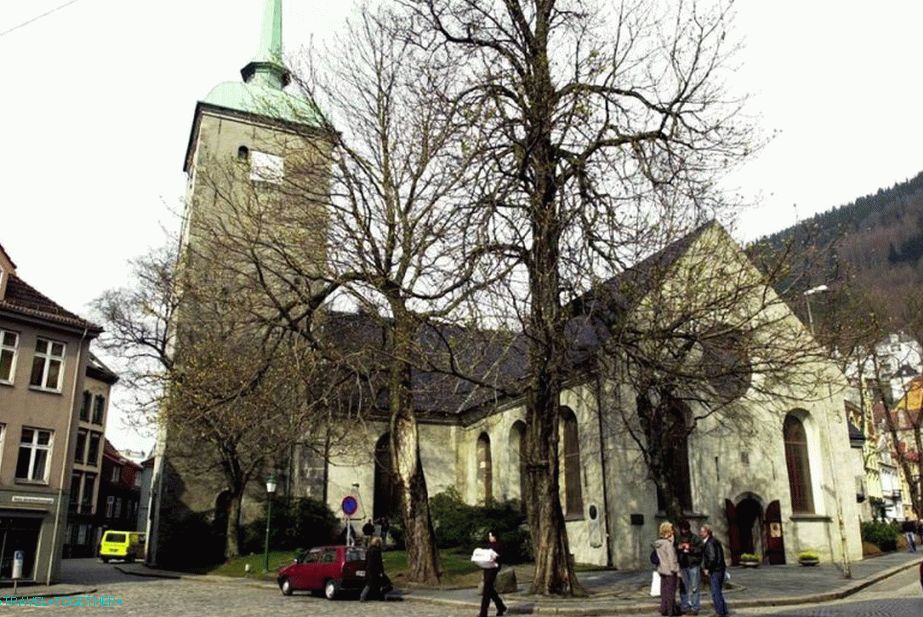 Church of the Holy Cross – Evangelical Lutheran Church 12 century. At first it was a simple Romanesque building, later rebuilt in baroque style. Located in the old town east of Vogen Bay. 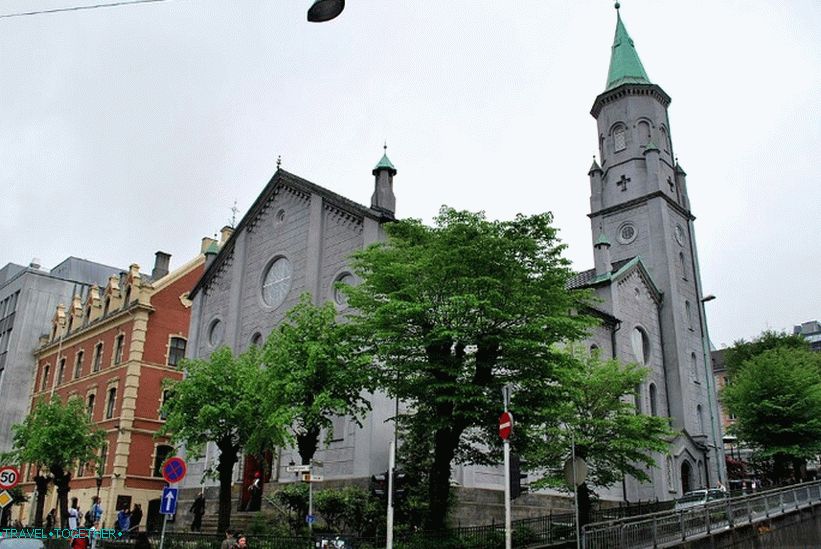 Church of sv. Paul’s – a catholic church of the mid 19th century Bergen

Bergen on the map of Norway