Basel (Switzerland) – the most detailed information about the city with photos. The main attractions of Basel with a description, guides and cards.

Basel is a city in the northwestern part of Switzerland and the capital canton of the same name. Located on the banks of the Rhine between the mountains of the Jura and Black Forest near the border with Germany and France. Basel is Switzerland’s third largest city and cultural capital. country. It has one of the best preserved and beautiful. medieval centers in Europe, across which several are scattered dozens of museums and galleries. Basel is open cosmopolitan a city with a pleasant casual atmosphere, interesting historical landmarks and monuments culture.

Basel is located in the northwest corner of Switzerland on the border with France and Germany. The city is the heart of this unique tri-national region, which is called Dreiländereck. is he is an excellent starting point for exploring the Northwest Switzerland, the Black Forest and Alsace. The River Rhine divides Basel into two parts. On the southern and western shores Great Basel (Grossbasel), which is located medieval old town. Located on the north shore “Little Basel” (Kleinbasel) is a modern area with a rich nightlife. 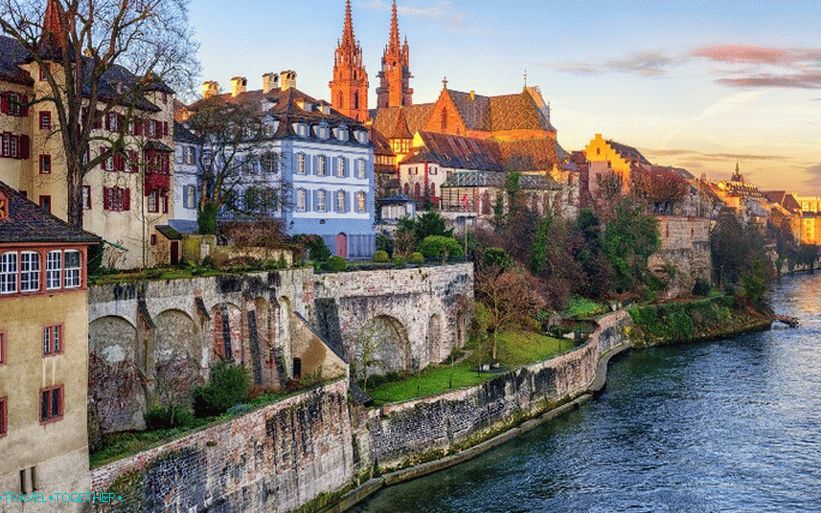 Basel’s climate is temperate with warm summers and cool winters. Rainfall is distributed evenly throughout the year. Average summer temperature is 17-20 ° C, winters vary from – 1 to +3 ° C

Basel is an ancient city with a history of more than two thousand years. is he grew out of the Roman fortification Basilea, founded in 15 BC Before the arrival of the Romans, the Celts lived here. In 740, Basel became residence of the bishops, which was the impetus for further growth and development of the city. 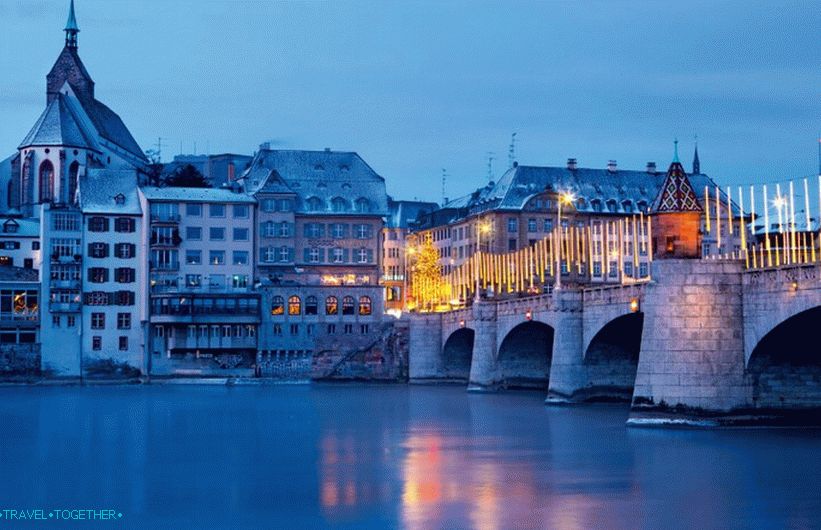 In 917, the city was destroyed by the Hungarians. In 1185, Basel suffered from a strong fire, and in 1356 – from a strong earthquake. In the period from 1362 to 1398, city walls were erected. In 1460 the year the university was founded in Basel, which is the oldest educational institution of Switzerland. In 1501 the city joined Swiss Union.

The nearest airport is 4 km from Basel on site. France. The air port serves three cities at once: Mulyz, Freiburg and, actually, Basel. From the airport to the city get on bus 11 and 50. 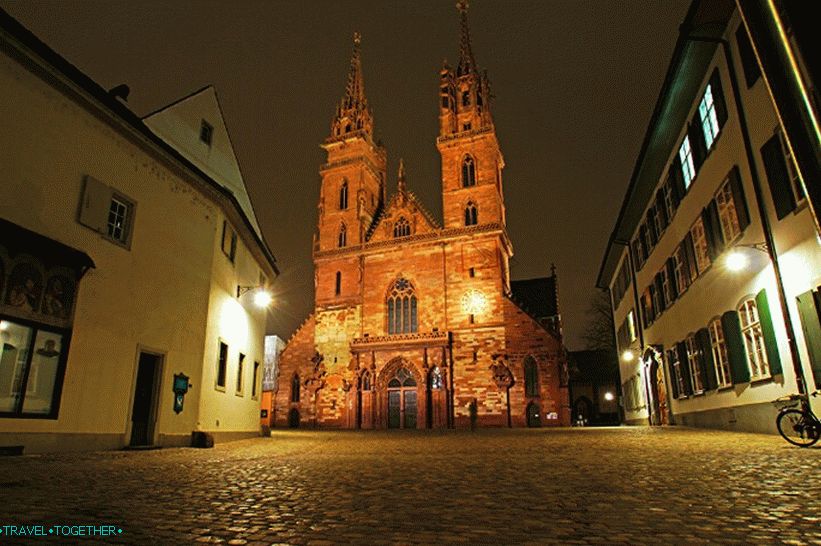 Basel is a major railway junction. The city has two main railway stations: Basel SBB (in the south) and Basel Badischer Bahnhof (in the north). Swiss trains arrive at SBB station and depart from Zurich (journey time 53 min), Bern (time at travel time 55 minutes) and Geneva (journey time 2½ hours) every half hour. High-speed trains connect Basel with Berlin, Paris and Frankfurt. There are also night trains to Amsterdam and Prague

The old town of Basel is one of the most charming and well preserved in Europe. The historic core of the city is located between Rhine and the old city gate Spalentor. It has small compact size and great for hiking. Christmas market in the old town

The historic center of Basel with narrow cobblestone streets, medieval churches and old houses has a wonderful the atmosphere. The most interesting places are the Marktplatz square. (Market Square), Münsterplatz (Cathedral Square) and Petersplatz (Petra Square), an old artisan district (Leonhardsberg, Spalenberg, Heuberg), Freiestrasse street with buildings in style Renaissance.

Do not be afraid to turn off the hiking trails. Perhaps so you find at least beautiful places, feel the atmosphere of Basel more fully and get to know the city a little better. Cathedral (Münster) – Medieval church in Gothic style with romance elements. The cathedral is located in the high point of basel and is one of the most recognizable buildings of the old town. Münster stands out for outstanding spiers and bright patterned roof. The cathedral is built between 9 and 13 centuries of red sandstone mined in French Vosges The church is located on the elegant Münsterplatz square. AT antiquity on this site was a Roman fort. The current cathedral building was restored in Gothic style in 1356 year after the earthquake. A beautiful ancient altar was destroyed in the time of the Reformation in 1529. The most remarkable feature Munster is the portal of sv. Gallus, located in the north the transept, with magnificent romance romance. The portal is considered the most important romance sculpture in Switzerland. Inside The cathedral is an ancient crypt in which there are tombs 10th-13th century bishops, beautiful Romanesque frieze, frescoes and many other valuable works of church art. 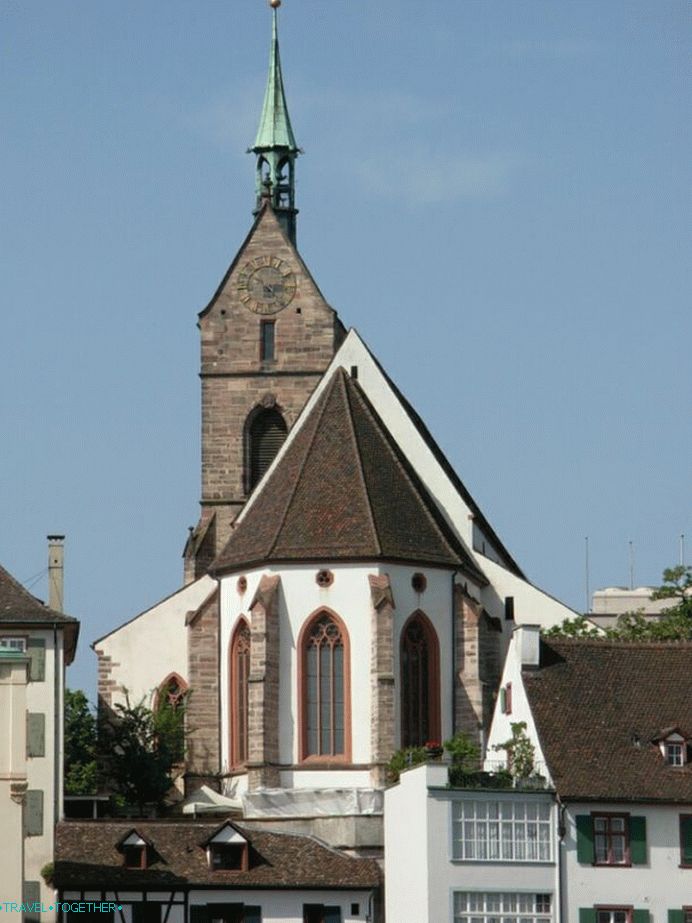 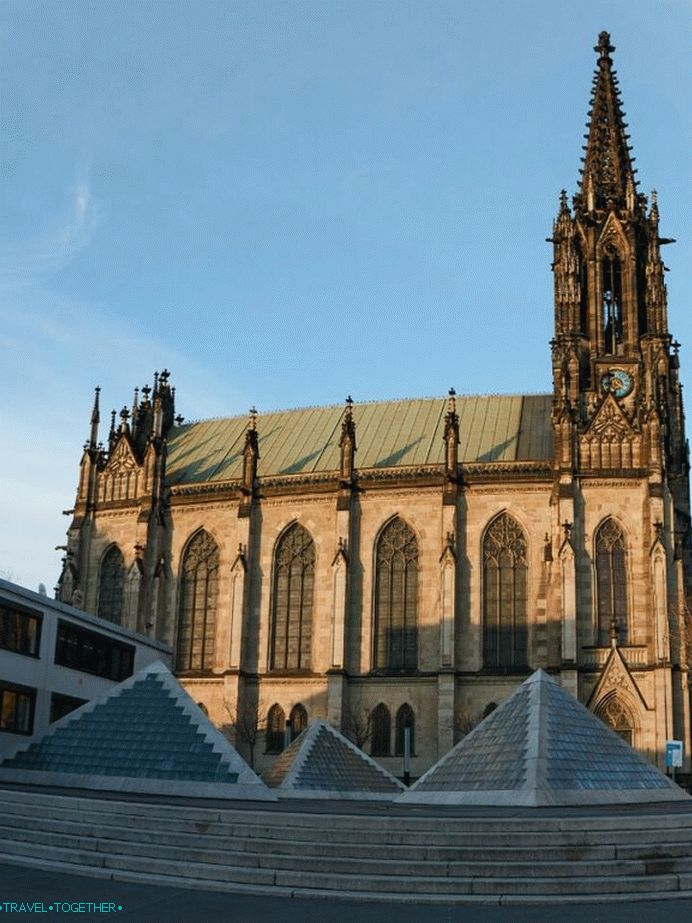 Church of sv. Elizabeth is one of the most important neo-gothic churches of Switzerland. It was completed in 1864, but produces impression of an older structure. The steeple of the bell tower has height of 72 meters. 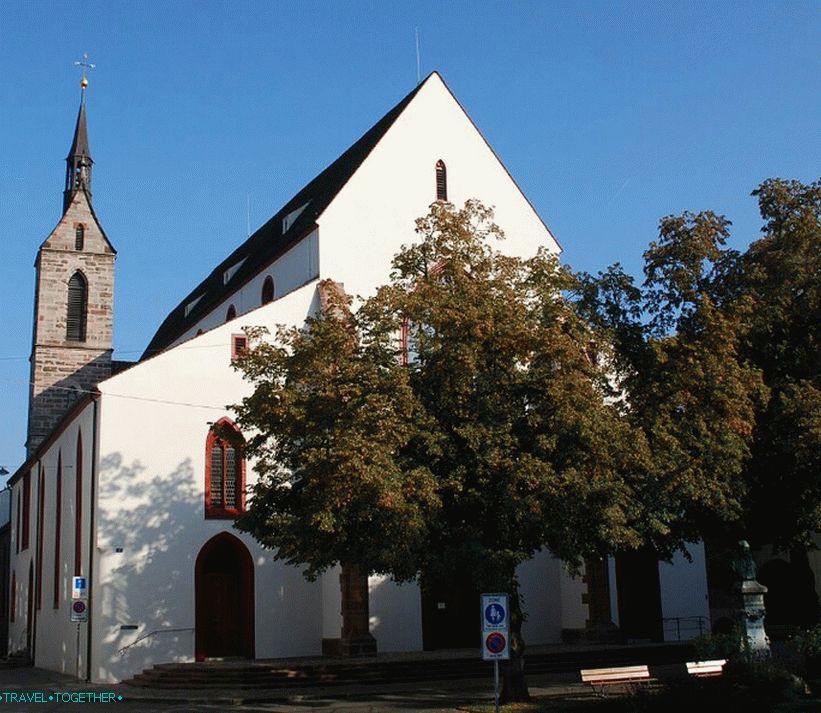 Church of sv. Petra – a medieval church in the historical center Basel. The first religious building on this site was built in the 9th century. Subsequently, the church was rebuilt in 1233, 1356 year (after the earthquake) and in 1529 (during the Reformation). 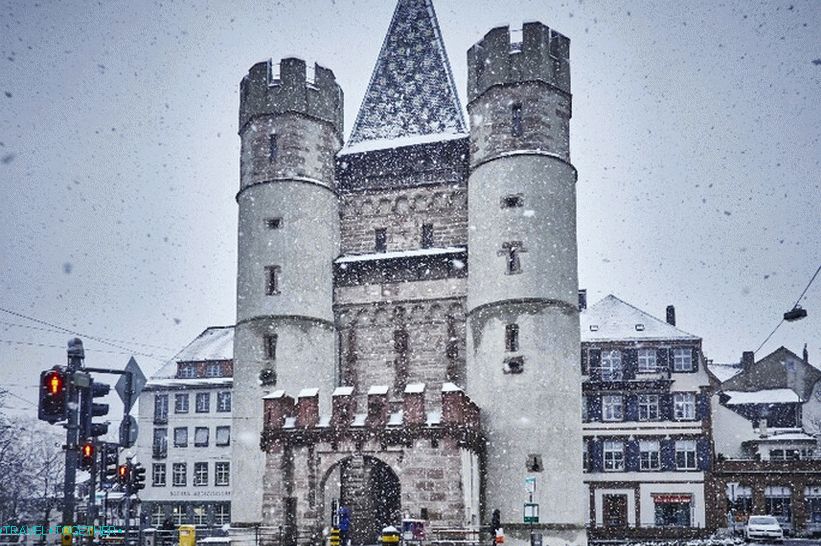 Spalentor – the mighty medieval gate of the 14th century. Once upon a time they were part of the city walls of Basel, and now they mark the border old town. City fortifications were demolished in 1866 year 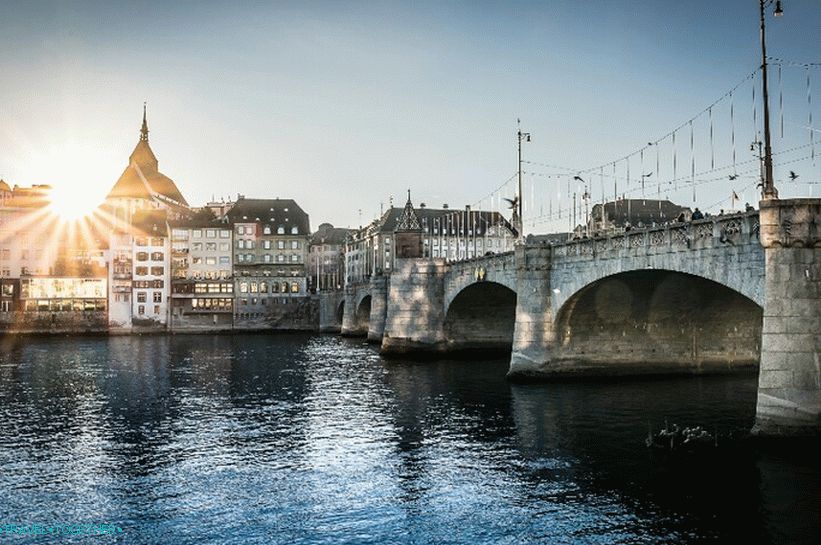 The Middle Bridge is one of the oldest bridges over the Rhine, built in 1226. The old bridge was replaced by a more modern structure. in 1905. One of the most important historical squares is the Market Square (Marktplatz). Its most remarkable building is 16th century Town Hall in the Late Burgundian Gothic style with a beautiful facade. The imposing tower was added in the 19th century. 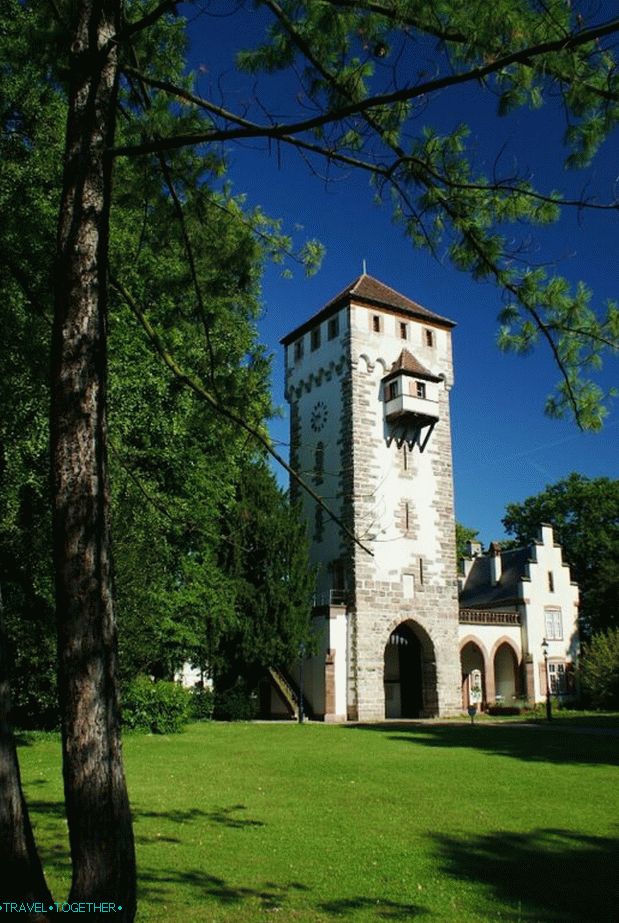 Gate of sv. Albana – one of the three surviving medieval gateway Dated 1400 year. 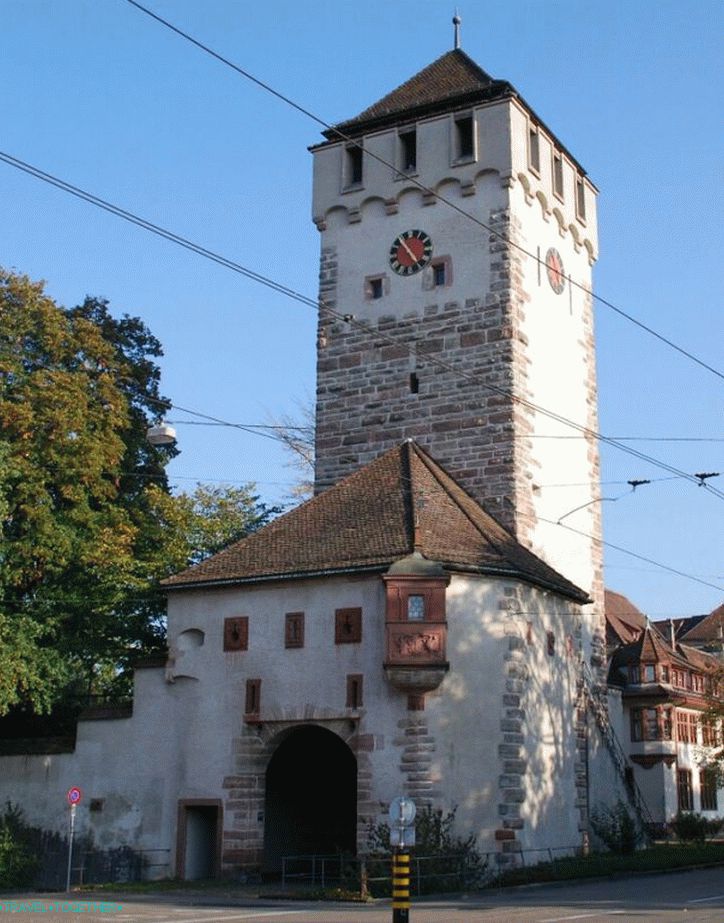 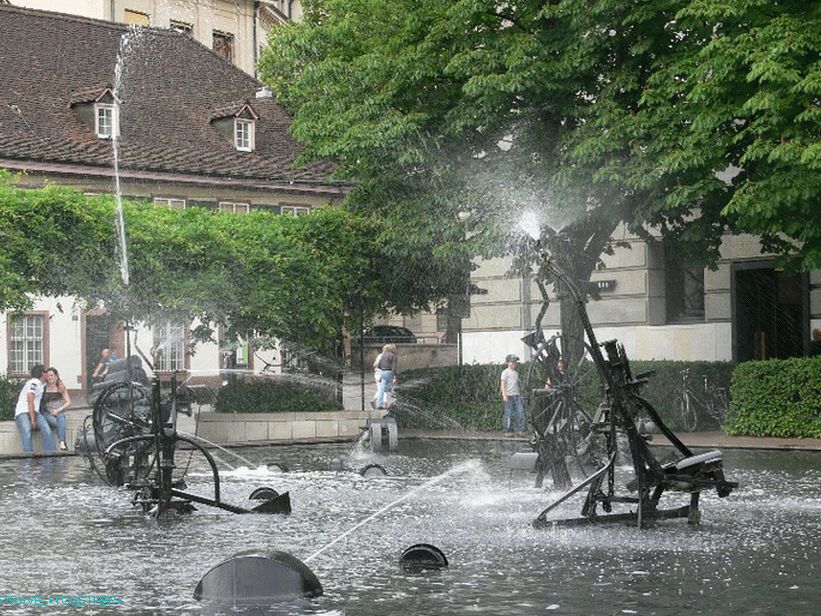 Basel is the cultural capital of Switzerland. Here function around 40 museums. Therefore, Basel is one of the best cities in Europe. for lovers of culture, history and art.