Barcelona (Spain) – the most detailed information about the city with a photo. The main attractions of Barcelona with a description, guides and maps.

Barcelona is a city in the north-east of Spain, the capital of Catalonia. It is the largest metropolis on the Mediterranean coast with a population of more than one and a half million people and the second largest in the country. Barcelona is a lively seaside city and port with magnificent cultural and historical heritage, unique atmosphere and charming architecture. The center of Catalonia attracts with its mild climate and relaxed lifestyle, surreal buildings – Gaudi masterpieces, beaches and the sea, delicious food and entertainment for every taste.

The sights of Barcelona cover almost 2000 years of its stories and include: medieval old town, unique mesh streets that reflects urban planning trends of the 19th century and many interesting, unusual and even a little fabulous Structures of which architectural delights stand out Antonio Gaudi. On the streets of the capital of Catalonia can easily be found ancient curiosities of the roman past, medieval quarters and cathedrals, sculptural and architectural masterpieces of modernism and modernity. Barcelona is the city where Pablo got his inspiration. Picasso and Joan Miro, where you can wander aimlessly through its streets, bumping into charming corners, listen to street musicians or have a good time in a cozy cafe. 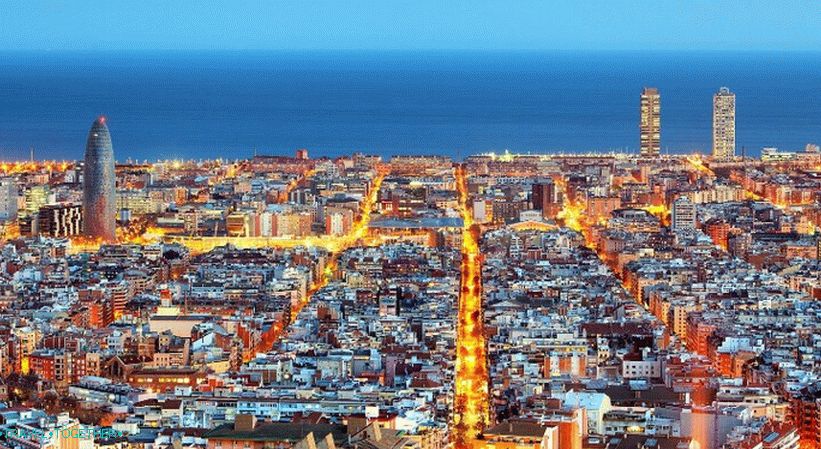 Barcelona is located on the territory of the Iberian Peninsula on Mediterranean coast 120 km from the border with France. From South The city is bounded by the mountains of Kolserser and the Llobregat River, and from the north – River Besos. The highest point is Tibidabo. The city itself lies on five hills that gave name to urban areas. 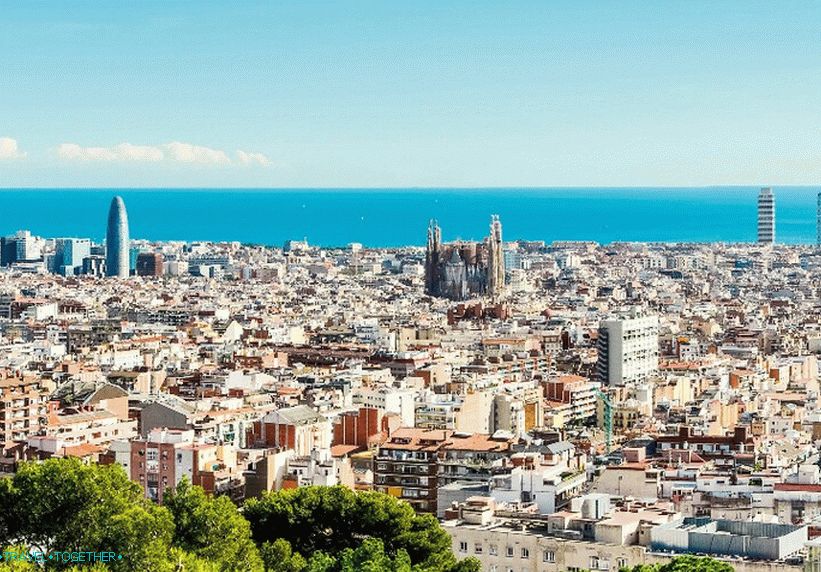 The climate is Mediterranean, with a dry and humid summer and warm and dry in winter. The hottest period is July and August. The coldest – January. Although even in winter the average temperature is about +10 degrees

The highest tourist season is July and August. At that time the city is given to the “mercy” of tourists. Locals mostly leave from the city. Some restaurants and shops are closed, and hotel prices “bite”. The most comfortable time to visit Barcelona – off-season. At this time it is warm here, but not hot. You can come to the capital of Catalonia and winter. During this period there are few tourists quite warm and dry.

There are several legends of the founding of the city. One of them attributes the founding of Barcelona to the legend of myths – Heracles, the other – Carthaginians. It is known that the Iberians lived here. Their The city was conquered by the Romans in the 2nd century BC. The romans built here fortification, whose center was located near square of sv. Jacob Due to its location and access to the sea grew, grew rich and strengthened until he was conquered by the Visigoths in 5 century. Interestingly, the remains of ancient Roman fortifications and Structures can still be found on the streets Barcelona 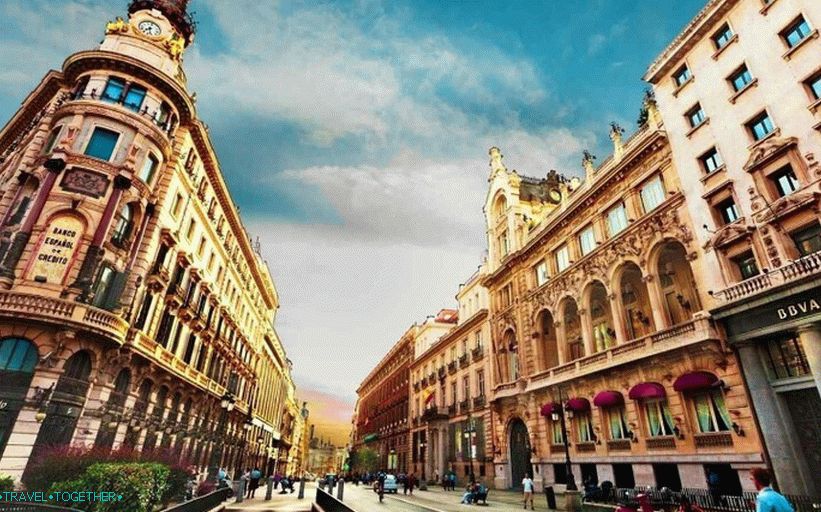 After being conquered by the Visigoths, it was located here for some time. the capital of their kingdom. At the beginning of the 6th century in the vicinity of Barcelona there was a battle between the Visigoths and the Ostrogoths, in which they won the last. In the 8th century Barcelona was taken by the Berbers. At the very beginning of the 9th century the city was conquered by the son of Charlemagne and made it the capital of the Spanish stamps. At the end of the 10th century after the raid of Al-Mansur, the Carolingians lost control of the capital of Catalonia, which gained its independence.

In the 12th century, Catalonia merged with Valencia, forming Aragon kingdom, which lasted until the 15th century. In 1410 century control of the city passed to the Castilian dynasty. In the second half of the 17th century after the fall of the Catalan Republic of Barcelona was looted. In the early 18th century, Catalonia was conquered Spain, in the composition of which it remains to this day. In the 19th century in Barcelona has seen an industrial boom that promotes growth. cities. In the 20th century, the capital of Catalonia turns into one of significant and largest cities in Spain. Despite this, historically the region has strong nationalistic sentiments and tendencies towards political autonomy.

Barcelona International Airport is one of the largest in Europe. It is located about 12 km from the city and consists of two terminals. Terminal T1 – new, it takes a number of large international and European airlines. Terminal T2, which, at mainly intended for small carriers and charters. You can get from the airport to the center of Barcelona (Plaza Catalunya) on bus A1 (from T1) and A2 (from T2). The trip will take 30 minutes. Buses run from 5.30 to 1.00. Cheaper option – bus 46, which serves both terminals and goes to the bus stop area Spain The airport is also connected to the metro city (line 9) and the line natural trains. 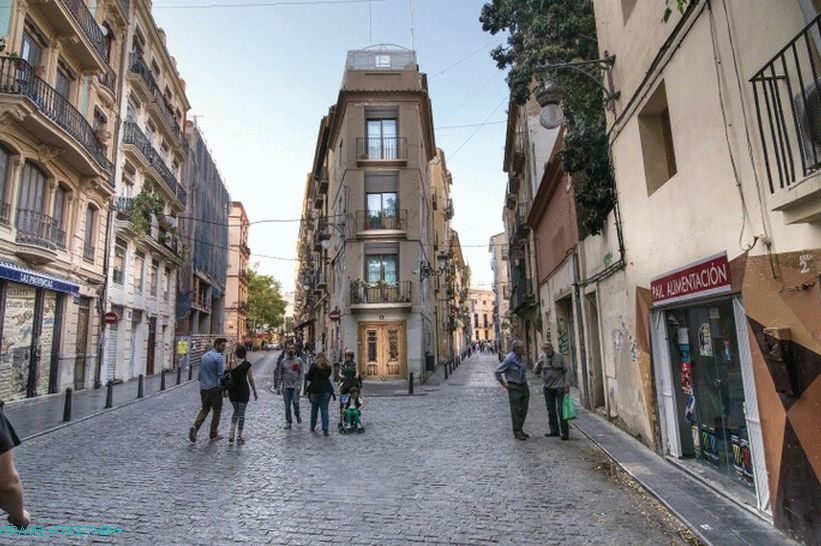 Barcelona has a well-developed railway connection with Nice, Paris, Marseille, Milan, Zurich, Madrid and other cities Europe. Bus service is available with most major cities. Spain and European countries including London, Amsterdam, Cologne, Brussels, Paris, etc. By sea to Barcelona can be reached from Rome, Sardinia, Genoa, Livorno, Algeria.

Barcelona is one of the main shopping centers in Spain. In the capital Catalonia has more than 30,000 stores. Main Trading street – pedestrian Las Rambla. Most shops and shopping The centers are closed on Sundays. From the markets stands out a huge la Boqueria, located in Ciutat Vella. In the same area the most fashionable shops and boutiques are located. Souvenirs can be bought at Gothic Quarter and Las Rambla.

From the best restaurants with traditional cuisine can be identified: 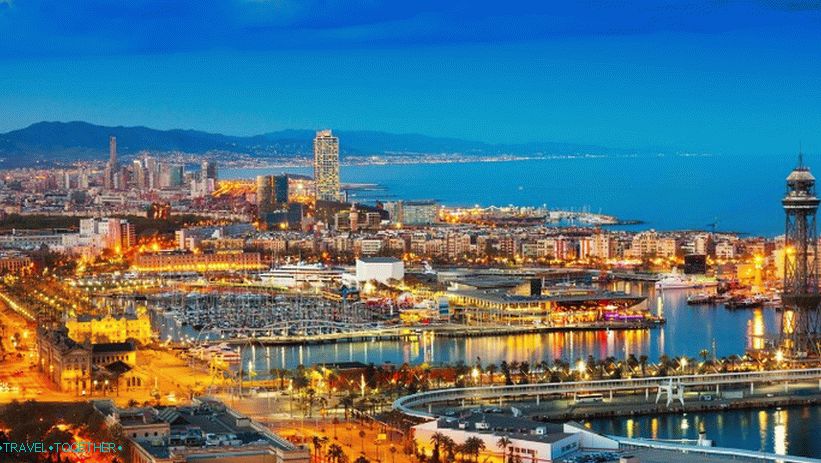 Barcelona is famous for its nightlife. In almost every area cities have their bars and clubs. But the main place of concentration of such establishments is the waterfront.

The main attractions of Barcelona are concentrated in The following areas: Old Town (Ciutat Vella), Eixample and Port Montjuic hill. The Old Town is the oldest part of the Catalan capital. Here you can find evidence of more than two thousand years of history. cities: from the ancient Roman period to the Middle Ages. Port and hill Montjuic – the seaside part of the capital of Catalonia, where the shipyard is located and a large park. Eixample – a new city designed in 19 century. 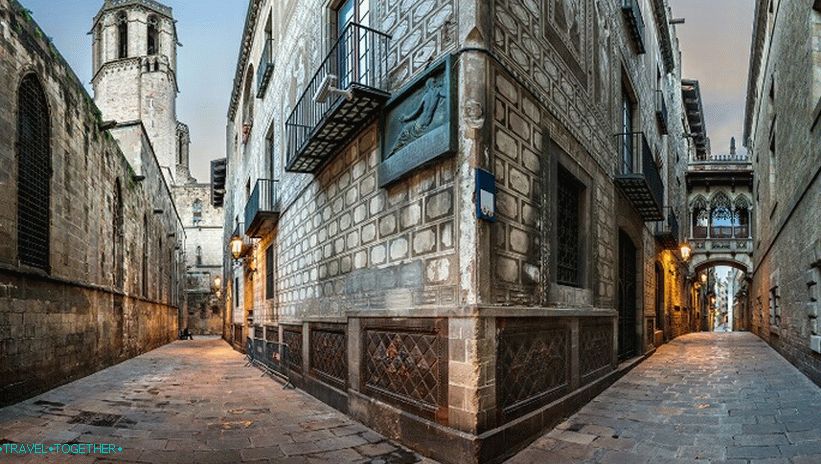 The old city is the historical core of Barcelona, ​​with an area of ​​about 500 hectare. Until the mid-19th century, it was surrounded by walls. A fragment of the original city fortifications can be found at medieval shipyard, which is located in the walls of the Maritime Museum. The area consists of four parts.

The central part of the old city is the Gothic Quarter. This is the center cities from the Roman times. Here you can see the ruins of the Roman constructions and plunge into the maze of narrow medieval streets. AT Gothic quarter you can discover the charming atmospheric places and picturesque quiet squares, animated by people’s emotions and sounds guitars, and in the quaint courtyards to sit in small nice cafe with terraces. 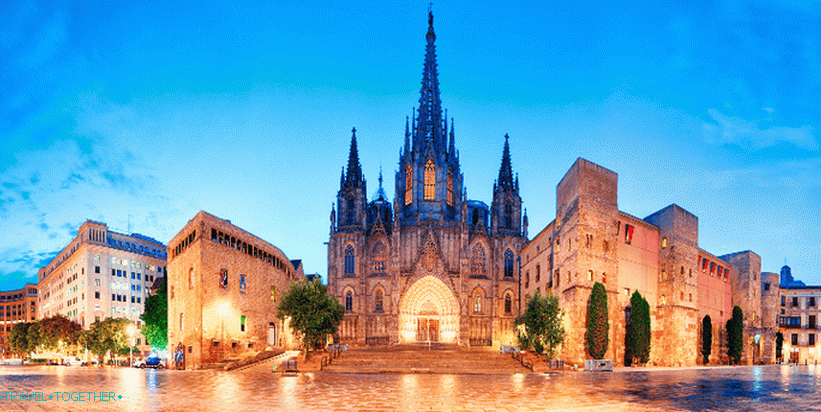 The main attractions of the Gothic Quarter: La Rambla – the famous pedestrian boulevard that divides historical center in two parts. This is the busiest street. Barcelona It was laid in the 18th century following the contours medieval walls. On La Rambla are impressive historical buildings, plenty of shops, the greatest theater of Barcelona and impressive Boqueria market. 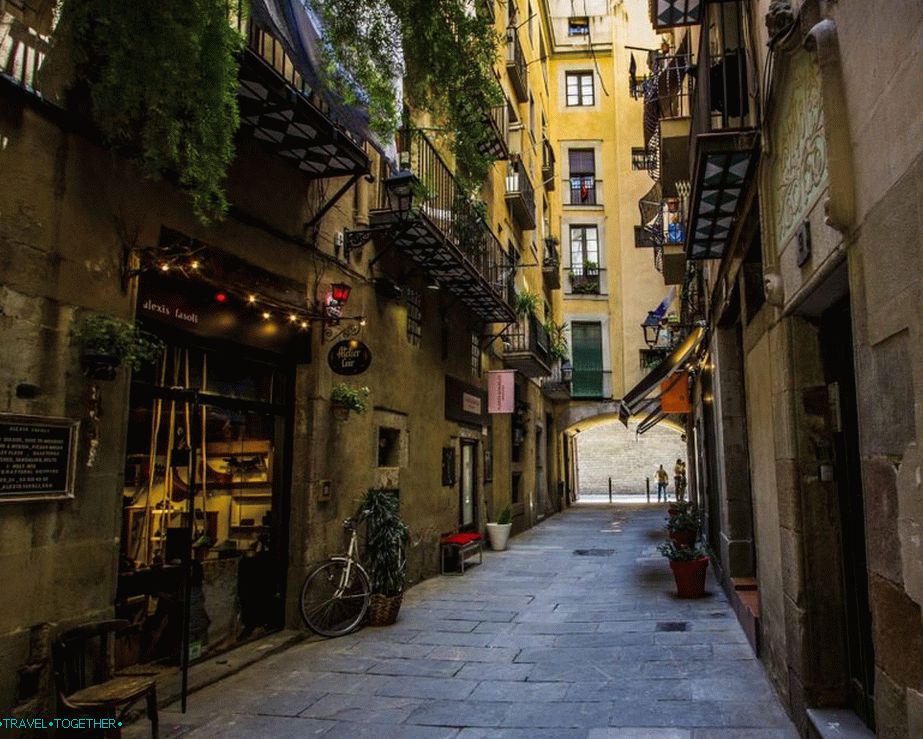 La Ribera – a charming area, which was chosen by Bohemians. AT past, the richest inhabitants of Barcelona lived here. Now here there are museums, art galleries, restaurants and wine bars.

Port Well is a medieval shipyard and port. Here is located starting point for pleasure craft. In a red brick building Palau de Mar is one of the most interesting museums in Barcelona – Museum of the History of Catalonia. 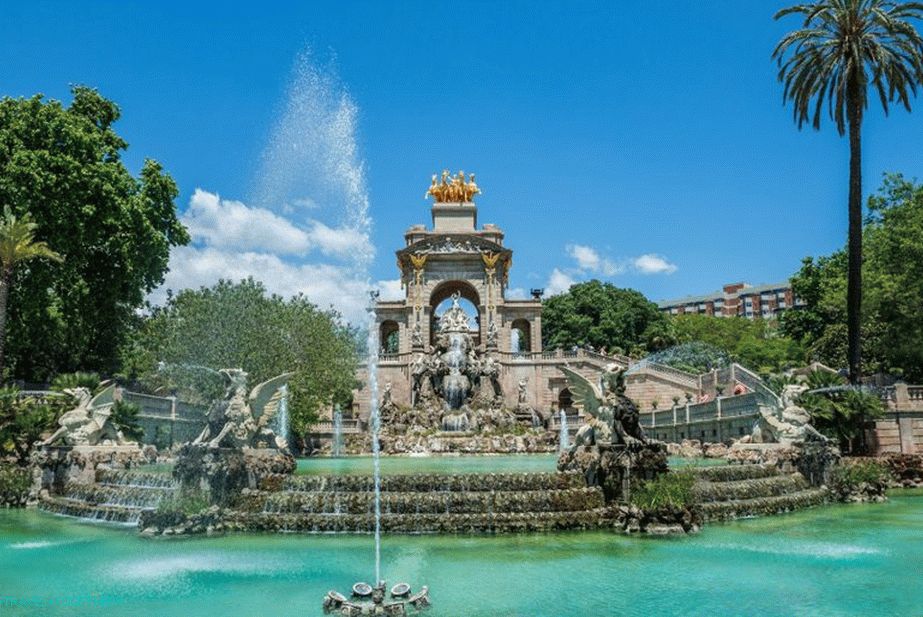 The citadel park was built in the 19th century on the site of a military fortress for World Expo. 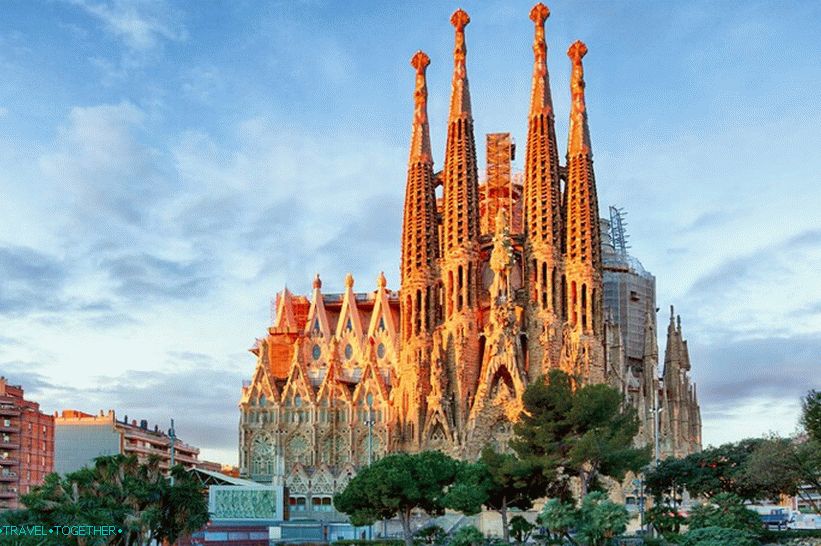 Sagrada Familia (Cathedral of the Holy Family) – a symbol of Barcelona and Gaudi’s masterpiece, the impressive basilica and one of the most unusual churches of Europe. Included in the World Heritage List UNESCO. It is one of the most famous protracted in Europe. The church was started by Gaudi at the end of the 19th century, but was never completed. so far.

Located in the northern part of Barcelona in the Eixample district. Sagrada Familia – a beautiful example of surrealistic architecture in art nouveau style. During the construction of Antonio Gaudi was not clear ideas and project. He changed the face of the basilica in the process. The famous Catalan architect planned to finish the work for 10-15 years.

Park Guell is another visiting card of Barcelona. This fun and a colorful park created by Gaudi and included in the list of objects UNESCO World Heritage Site. Viaducts, grottoes, colonnade hall, winding stairs and other charming places are scattered around the whole space. These creative structures are decorated with colorful ceramic fragments. There is a beautiful view from the terrace of the park. on the city and the sea. Gaudi himself loved this area. Here also was his house. 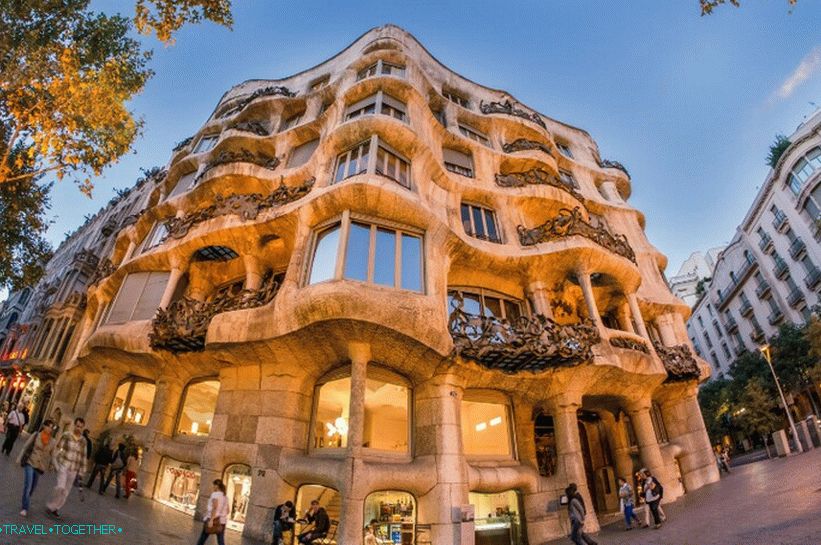 Casa Mila is an avant-garde style residential building in the Eixample district, built in the early 20th century. Is the most famous secular Gaudi building and is listed as a World Heritage Site UNESCO. Each line of the facade of this amazing building is from natural stone is curved, with rounded windows and metal balconies twisting to form plants. Even the roof has a wavy shape, complemented by decorative chimneys. 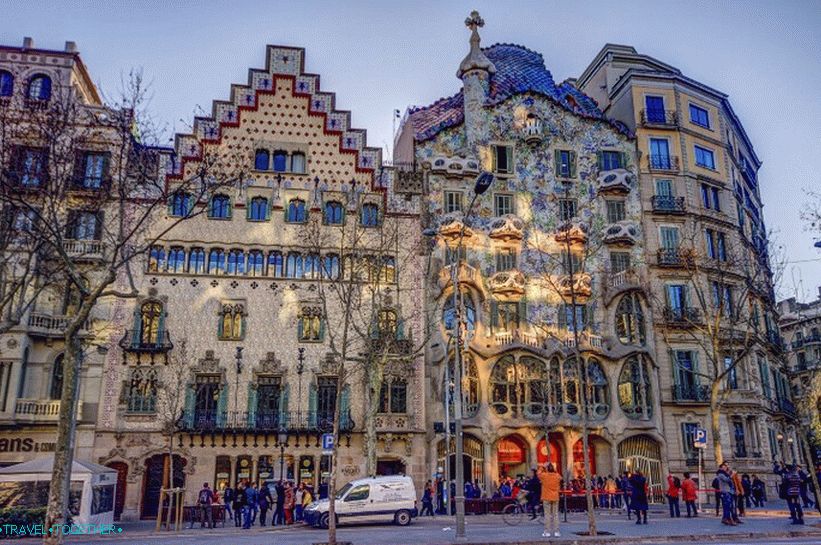 The Casa Batlló is another masterpiece of Gaudi and one of the most beautiful. buildings of Barcelona. It is a great example of architecture. modernism and is included in the list of UNESCO World Heritage sites. The fantastic mansion was designed as a private residence for a major textile worker Josep Ballo. With free swinging forms and decorative facade, this fabulous building looks like castle from a surrealistic fairy tale. Most of the details of his design completely depart from any architectural trends. 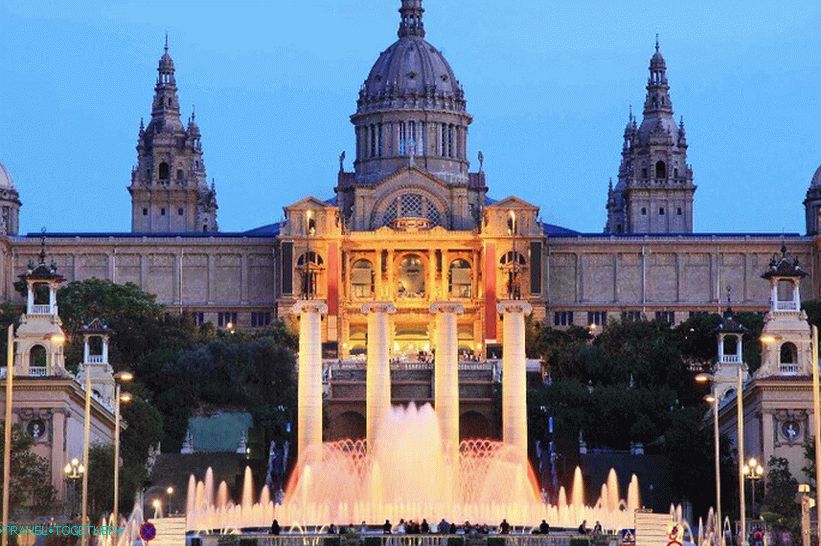 Montjuic – a hill near the port with the largest park of Barcelona – Tibidabo and the old Jewish cemetery. In a beautiful palace located National Art Museum of Catalonia with art collections from 10th to 20th century. 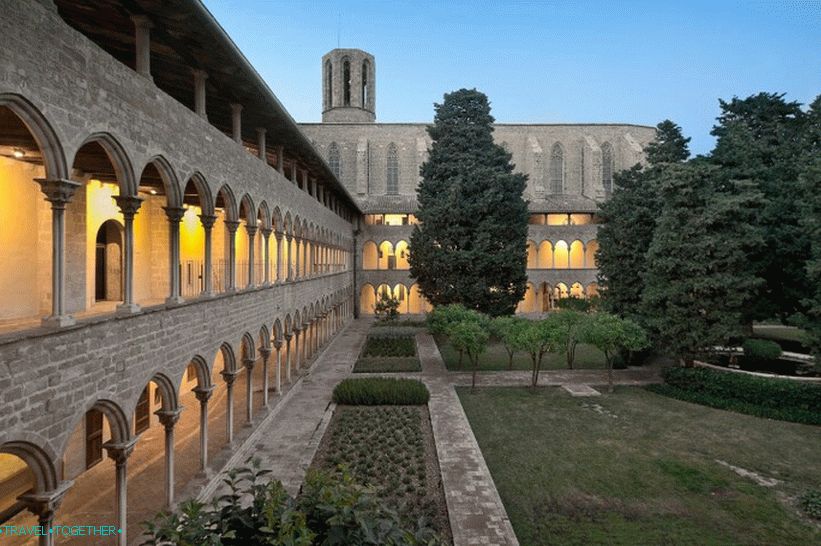 Monestir de Pedralbes – a monastery of the 14th century, a great example Catalan gothic. Located in a picturesque little park. AT monastery museum is a magnificent collection medieval art from the 14th century.

Camp Nou is one of the greatest football stadiums in the world, home arena of FC Barcelona.

Barcelona on the map of Spain