Avila (Spain) – the most de tailed information about the city with photos. Avila’s main attractions with a description, guides and cards.

Avila – a city in the Central Spain in the autonomous community Castile and Leon. Located in the northwestern part of the autonomy in surrounded by the mountains of Sierra Gordos. Avila is one of the oldest and most beautiful cities in Spain, the historical center of which is included in List of UNESCO World Heritage Sites and surrounded by medieval fortress walls. Ancient fortifications extend almost 3km and guard amazing sights: Romanesque churches, medieval monasteries and Renaissance palaces. Avila is a wealth of artistic and cultural heritage that is witness the glorious past of the city as an outstanding textile and pilgrimage center.

Avila is located in the northwest of the autonomous community of Castile and Leon on the right bank of the Adaja River, which is a tributary Duero. The city is located on a plateau surrounded by the mountains of Sierra Gordos. The climate is continental Mediterranean. Province of Avila is one of the coldest regions of Spain. Annual average temperature is 11 degrees. Summer is hot and dry, winter cool with little frosts. It is believed that the first settlement on the site of Avila was founded tribe vettonov in the 7th century BC. Later settled here the Romans who built the city and surrounded it with a fortress wall. Roman heritage can still be found on the streets of the historic center.

From the 5th to the 8th century Avila was part of the kingdom of the Visigoths, and from 8 by the 9th century belonged to the Moors. Interestingly, the Visigoths and Arabs almost no traces on the “face” of the city. During the period Reconquista Avila was between the Moors and Christians, suffering from raids and those and others. Finally part of the kingdom of Leon city became in the 11th century. During this period powerful were built fortifications that have been remarkably preserved to our days In the 12th century, Avila became one of the centers of textile industry in the Pyrenees. Although local fabrics were inferior in quality Flemish and Italian. In the 14th century the city was attacked the british Since the end of the 16th century, Ávila loses its value, occurs population decline and economic decline. In 1809 the city was looted by french troops.

The nearest airport is located in Salamankev 50 km to the west from Avila. But the most convenient and cheap way to get here – Madrid Airport, which is the largest in the country. is he located 100 km south of the city. Avila has a regular bus and train connections with Madrid, Salamanca, Segovia. The railway station is located 500 m east historical center.

Many restaurants and cafes can be found in the Calle de San Segundo and lanes around the Plaza del Mercado Chico. The most famous traditional dishes: beef steak (Chuletón de Ávila), roasted pig or lamb, veal with beans, cake egg yolks with sugar (Yemas de Ávila). One of the main features of the historic center of Avila are the medieval city fortifications that are completely surround the old city and are considered one of the most well surviving structures of this kind in Spain. These powerful walls were built between the 11th and 14th centuries on the foundations of the Roman and Arab fortifications. Their average thickness is about 3 m, and The length is 2.5 km. Impressive stone walls include 88 towers and 9 urban gateway They have an average height of 12 meters and are very well defended. old city from any attacks. Built every 20 meters jagged semicircular towers. 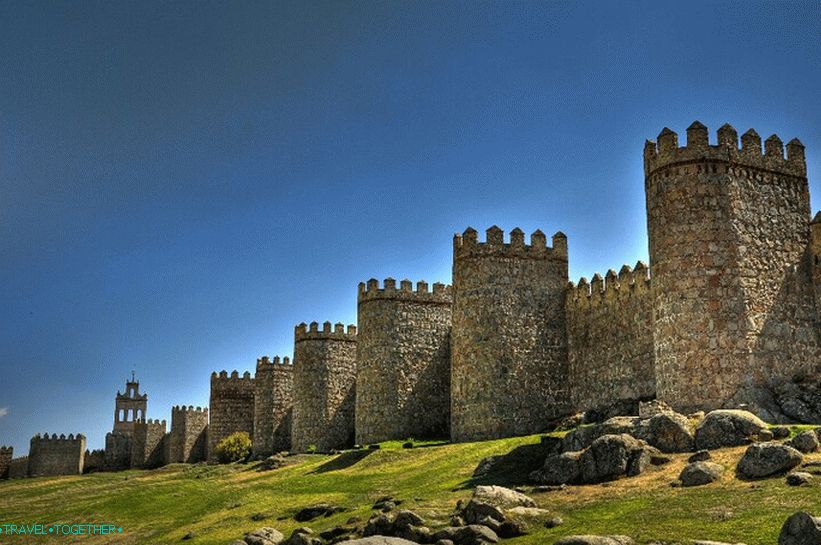 The most spectacular of the nine city gates – Puerta de San Vicente and Puerta del Alcazar, built on roman foundations. Near Puerta del Carmen, in the north the historic center of Avila, is a tower with a stork nest. Here You can also start walking along the medieval walls. Cathedral of San Salvador – impressive religious construction, one of the oldest Gothic cathedrals in Spain. Church began to build in the 11th century in the Romanesque style. Building lasted for several centuries, and the predominant Gothic style has become an architectural style. The cathedral is built of granite and actually is part of the fortress walls. Most impressive interior features are: white and red masonry granite, stained glass windows of the 15th century in transepts, a majestic choir in plateresco style, beautiful altar and sacristy with sculptures. Santa Teresa – a monastery built in the 17th century for Carmelite monks. Located near Puerta de la Santa in the place where the famous saint and patroness of Avila was born – Theresa. The monastery church has a simple baroque facade. Inside there is a room in which born sv. Teresa turned into luxuriously decorated baroque chapel. In the nave of the church there are magnificent sculptures of Gregorio Fernandez. In the monastery there is a museum.

Avila is a famous pilgrimage site. In churches and monasteries kept the power of St.. Teresa – Famous Catholic Saint. Santo Tomas – royal monastery founded in the 15th century the founder of the Spanish Inquisition, Thomas Torquemada. Facade the monastery church has a strict appearance, and its interior pretty gloomy. The exception is the high altar and choir. 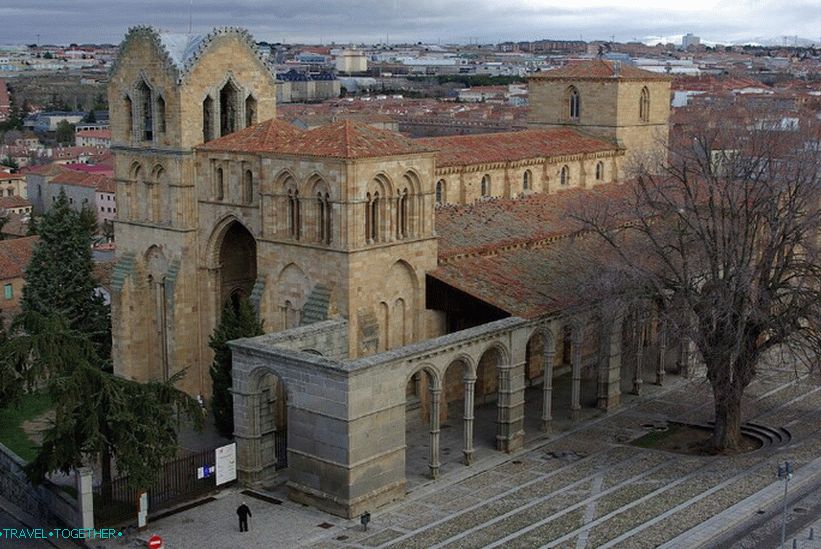 San Vicente is one of the most impressive sights. Avila, a grand Romanesque church. It is believed that basilica built on the site where he was tortured and killed by St. Vicent Large part of the building was built at the beginning of the 12th century, including part of the nave, apse and transepts. The rest of the basilica dates from 14 century. In the Middle Ages, Avila was large, prosperous and influential. Jewish community. Jews lived in two districts within urban walls: in the northeast around Puerta de San Vicente and in Southwest – between Puerta de la Mala Dicha and Puerta del Puente. The Jewish quarter is a charming medieval atmosphere. cobblestone streets and lanes. Mozen Ruby – the chapel of the early 16th century, located north of Plaza Mayor, between Puerta del Carmen and Puerta de San Vicente. It was built as a burial place for influential relatives. aristocratic family. Later belonged to the female Dominican monastery. The chapel has a rich interior. The monastery of Santa Maria de Gracia was founded in the 16th century. is he located outside the city walls and built in the style of the era Renaissance. Las Gordillas is a beautiful 16th century monastery. It is brick the building was built in the Renaissance style and declared a national monument of spain. The most remarkable feature of the interior is a choir consisting of thin tiers (diagonal rib vaults). San Andrés is a Romanesque temple built in the 11th century. Is an national monument. The church has a typical romance design: simple three-nave layout and gloomy interior.

Avila on the map of Spain