Alanya (Turkey) – the most detailed information about the city with photos. The main attractions of Alanya with a description, guides and cards.

Alanya is a city in southwestern Turkey, a seaport and a popular resort. Located on the Mediterranean coast 138 km from Antalya. Alanya is an ancient city that is one of the most the well-preserved cities of the Seljuks, has many ancient monuments and natural attractions. This is one of the most popular holiday destinations on the Mediterranean coast of Turkey known for its excellent sandy beaches and clean warm by sea

Alanya is located in the Anatolian Gulf on the plains of Pamphylia between the Mediterranean Sea and the ridges of the Taurus Mountains. City divided rocky peninsula and is part of the Turkish Riviera. Alanya located among picturesque landscapes with typical Mediterranean vegetation and rocky hills covered with coniferous and deciduous forests. 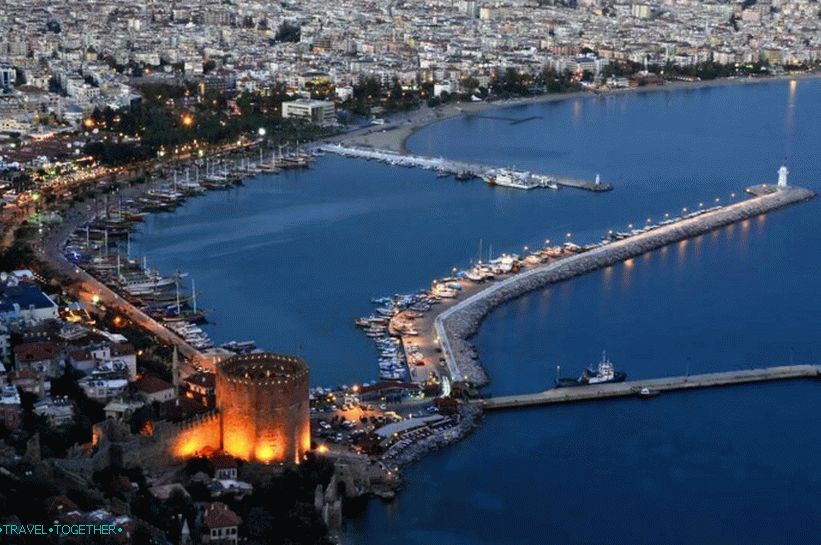 Alanya in the evening

The best time to come to Alanya is from May to October. Already at the end of spring, the water temperature in the Mediterranean reaches 21-23 ° C. In June and September, the water temperature is around 25 ° C, and the height of summer is 27-29 ° C. The hottest months are July and August. Most comfortable weather, of course, in June and September.

Alanya is one of the most popular resorts in Turkey. which comes 9% of all tourists. Also 30% of all real estate which is acquired on the territory of the country by foreign citizens, located in Alanya. 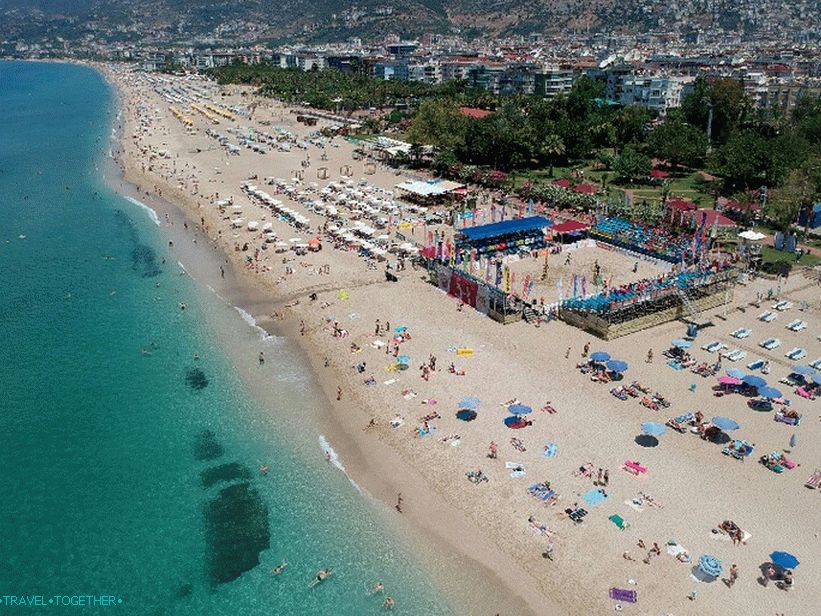 Historically, Alanya is located between Cilicia and Pamphylia. The neighborhood of the city was inhabited from the Paleolithic. In the 4th century BC there was a Greek settlement Corakesion. Later here Cilician pirates settled who kept everything in fear Mediterranean coast. Pirates were destroyed by the Roman troops led by Gnei Pompey in the 1st century before ours. Alanya reached its highest peak in the Roman period and was one of the most important cities of Antalya.

After the fall of the Roman Empire, the city became part of the possessions. Byzantium. The Byzantines called the cities of Kalonoros, which means “beautiful mountain”. In the 13th century, Alanya was captured by the Seljuks, who called her Alaye. During this period were built numerous defenses and cultural monuments, and The city has become one of the most important ports of the Mediterranean. In the 15th century Alanya became part of the Ottoman Empire. After that, the value of the city has fallen. The modern name Alanya received in 1933 when Ataturk.

The nearest airport is located two hours from Alanya in Antalya. For travel between cities, you can use the bus and Turkish bus (dolmuş).

Advice – in private shops you should definitely bargain. Often the price of the goods is doubled. Also, it is better to take sweets by weight, having tried before, often beautiful big boxes are not guarantee the quality and size of the content. 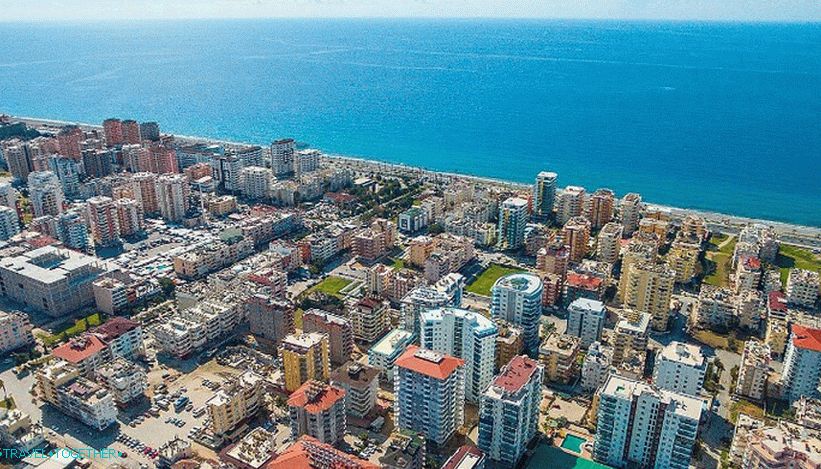 In Alanya, you can try excellent Turkish cuisine, fish and seafood. Popular foods: lahmacun, şiş kebab and others varieties of kebab, baklava (Turkish sweetness). Find a restaurant in Alanya according to his taste and financial possibilities is not a problem. Also resort, which is logical, offers a vibrant and rich nightlife. Closer to the night, numerous clubs and bars start to work.

Despite the fact that Alanya was founded over two thousand years the Greeks, the Romans and the Byzantines, and almost all famous landmarks were built by the Seljuks. 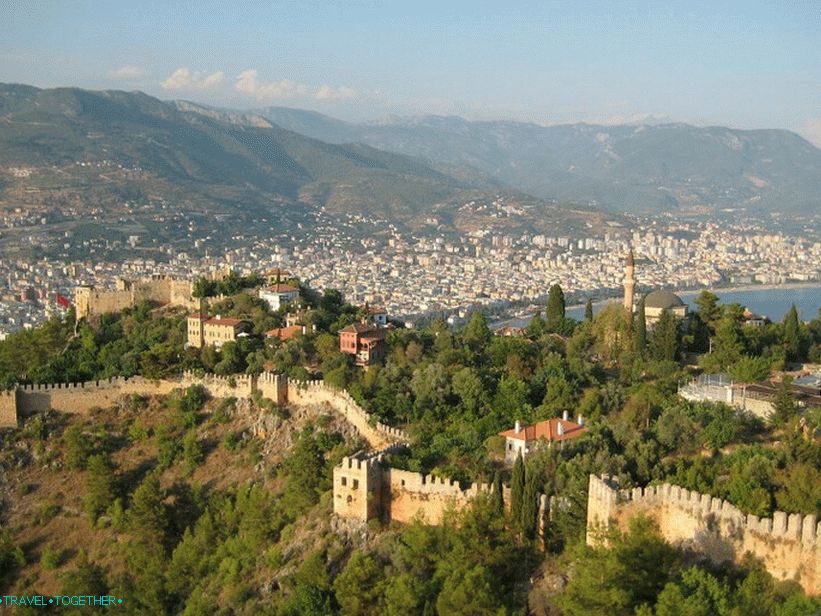 The fortress is one of the symbols of Alanya. Medieval walls have The length of 6.5 km. They were equipped with 140 towers and included 400 tanks. The eastern part of the fortress is very picturesque. Here are the walls go down to the sea to the Red Tower. Alanya Castle was built by the Seljuks in the 13th century on Hellenistic foundations. AT The castle has preserved several historic buildings: tanks, baths and Byzantine church. 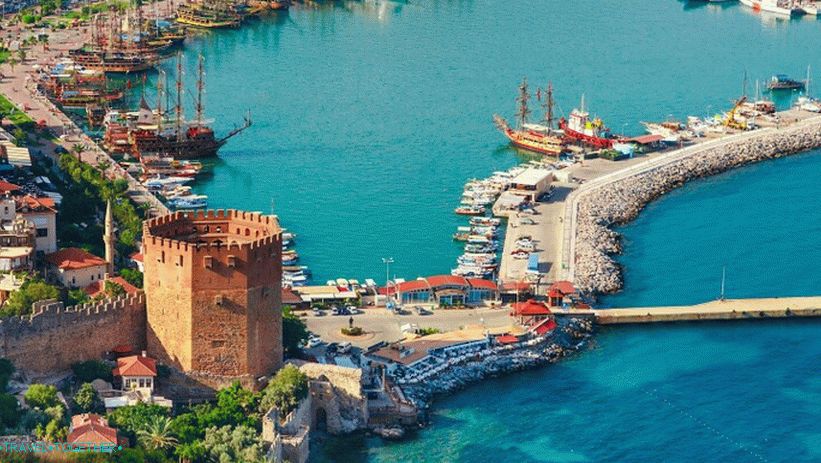 The Red Tower (Kizil Kule) – powerful medieval octagonal a structure that is one of the most famous Attractions Alanya. The tower has a height of 33 meters and built of red brick in the 13th century to observe the harbor 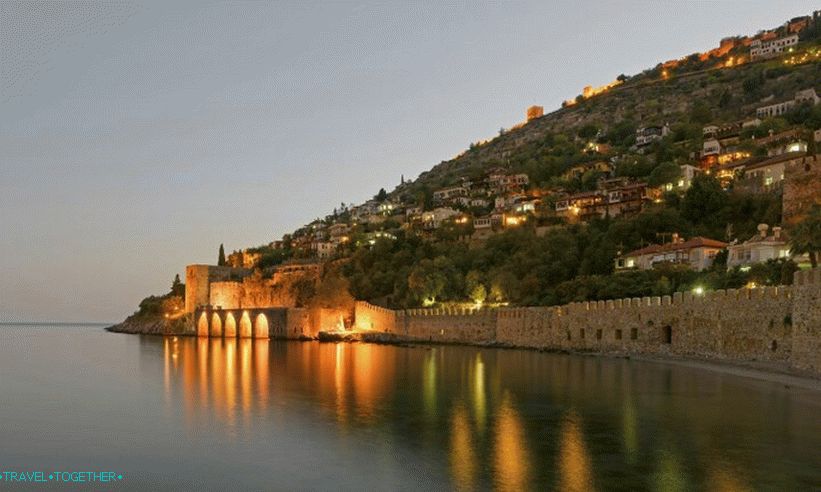 Shipyard (Tersane) – medieval shipbuilding, built in the 13th century by the Seljuks. Located south of the Red Tower. There are five arched galleries, where ships used to be made. At the top of the cliff is a weapon house, which produced the guns. 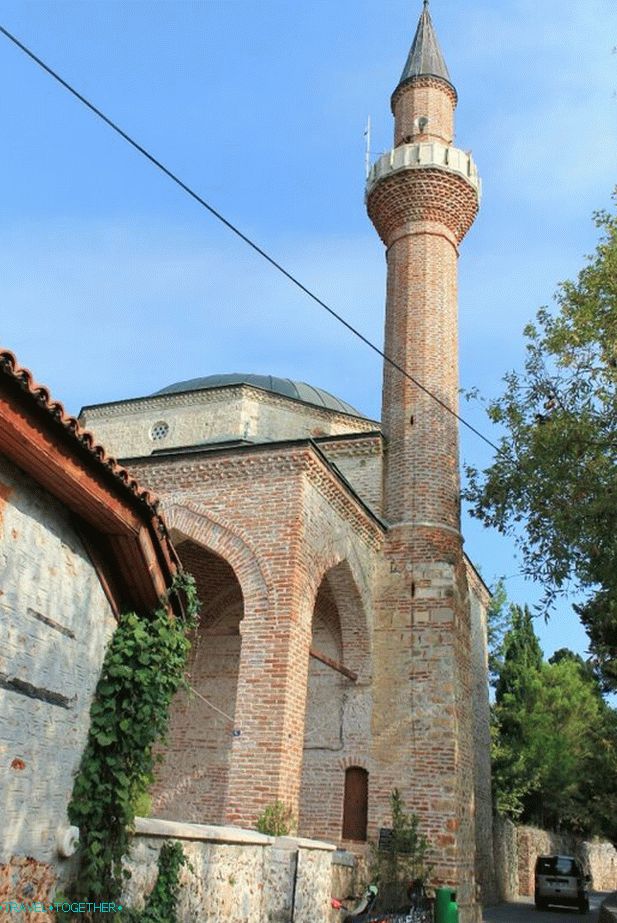 Suleymaniyah – an ancient mosque with a brick minaret, built in 13th century. The building was rebuilt in the 16th century.

What to do in Alanya: 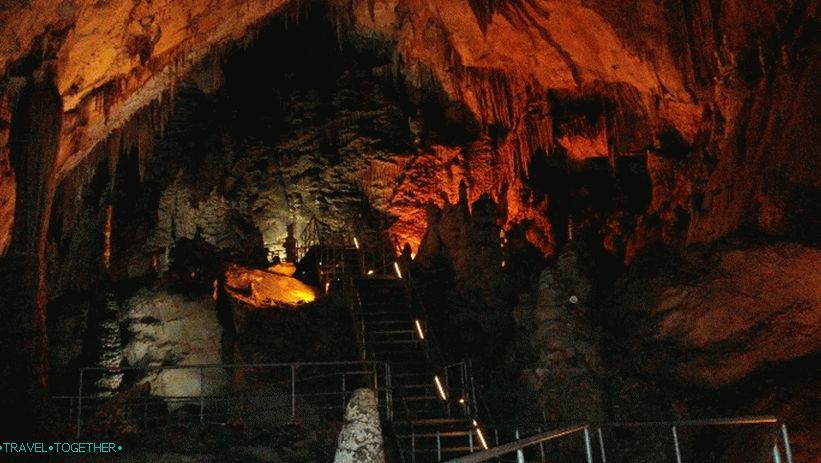 Interesting places in the vicinity 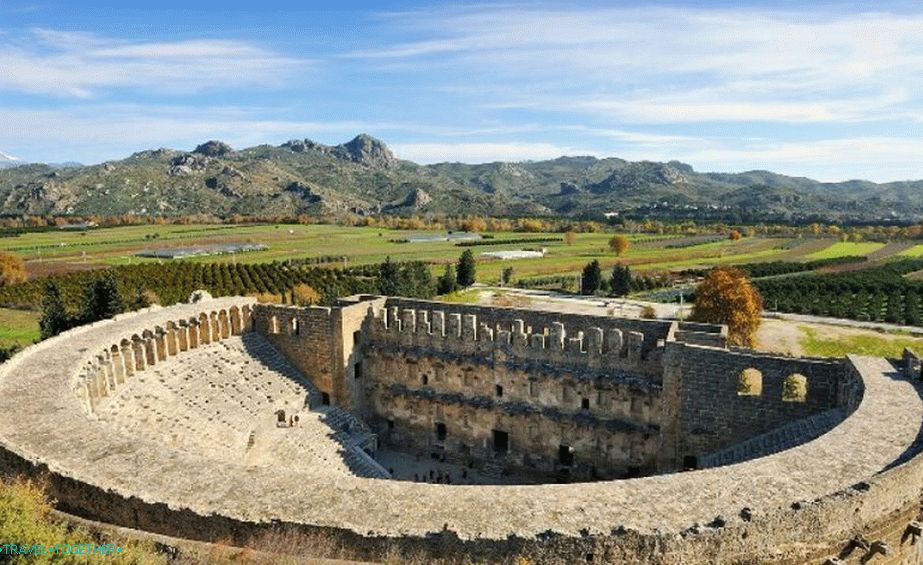 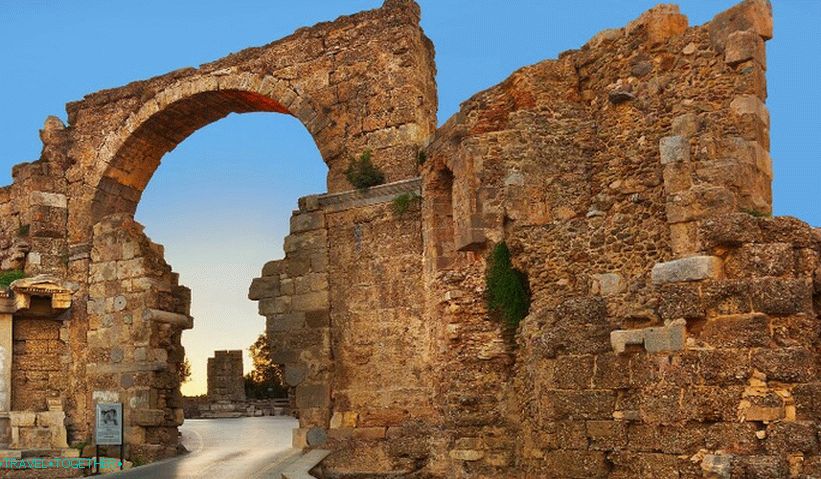 Side is the main city and port of ancient Pamphylia with a huge historical and cultural heritage in the form of Greek and Roman the ruins. 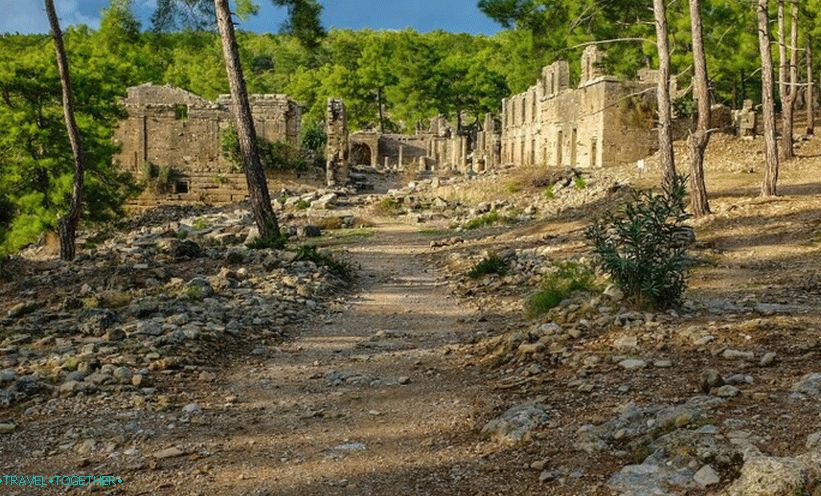 Seleucia is the romantic ruins of the ancient city located in picturesque pine forest.

Alanya on the map of Turkey