Aberdeen (United Kingdom) – the most detailed information about the city with a photo. The main attractions of Aberdeen with a description, guides and maps.

Aberdeen – a city in the north-east of the UK, located in the historic Grampian region. This place is often called “flower Scotland “due to the picturesque North Sea coast and abundance green arrays. Aberdeen – the largest fishing port of North Britain and the capital of the offshore oil industry. it a thriving commercial city with stunning granite architecture which gives it a slightly harsh character.

Because of the spread in the construction of granite, Aberdeen also often called the “Granite or Gray City”.

Aberdeen is located in the northeast of Scotland on the shore North Sea. The city is located between the rivers Di and Don at the southern the foot of the Grampian mountains. The climate of Aberdeen is temperate marine with in cool summer, rainy autumn and mild winter. Modern Aberdeen was formed only in 1891 in the result of the merger of two settlements: Old Aberdon (the university city and the residence of the bishop, who is now It is its northern part) and New Aberdeen (in the past fishing a village on the River Dee and, accordingly, the southern part of the city). AT the Roman period at this place was formed by the colony of Devan, which was abandoned after the romans left Britain

The medieval settlement here was founded in the 6th century of sv. Mahar Subsequently, this parish grew into a rather independent and authoritative episcopacy. In the 12th century, construction began. impressive gothic cathedral of st. Mahara. In the same period Aberdeen was granted city rights. In the 12th – 14th centuries the city was the residence of the kings of Scotland. In 1336, New Aberdeen was burnt by the English king Edward III. After that he was rebuilt and greatly expanded. Between 1644 and 1647 (in the period of the war of the Three Kingdoms) New Aberdeen was somewhat taken and looted by all parties to the conflict. In 1647 in the city a plague epidemic broke out. 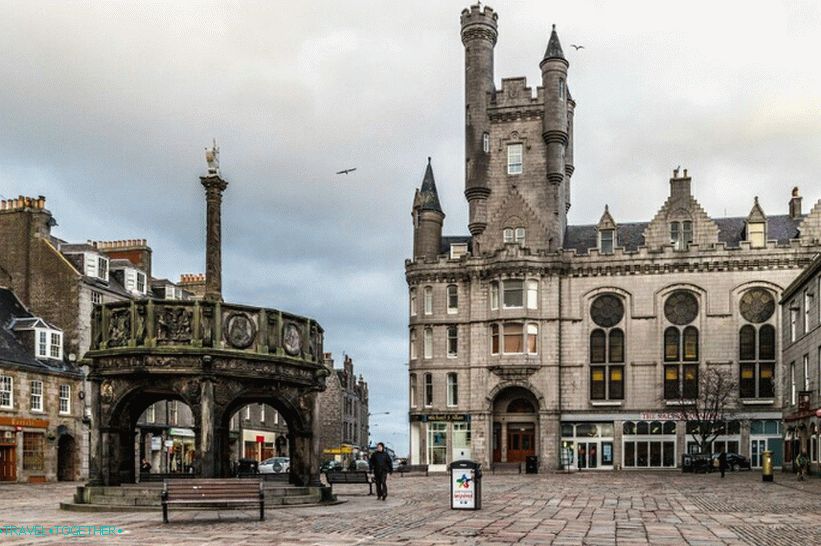 During the industrial revolution, Aberdeen became one of The largest industrial centers and ports of Scotland. Industrial the development of the city continued until the Second World War. In 1943 Aberdeen suffered from the strongest bombing. New stage of development the city fell on the second half of the 20th century, when on the shelf The North Sea has discovered significant oil reserves, as well as methods of their extraction were developed. In the 70s Aberdeen becomes one of the centers of the European oil industry, which is very beneficial effect on its development.

Aberdeen – one of the most interesting and beautiful historical cities of Scotland (and the UK in particular). He actually has two whole old cities. The first is Old Aberdeen, which has amazing granite and stone architecture, atmospheric cobbled streets and sights from the period Middle Ages. The second is a former fishing village, which is now is a quaint fishing quarter on the water’s edge with nice old houses. 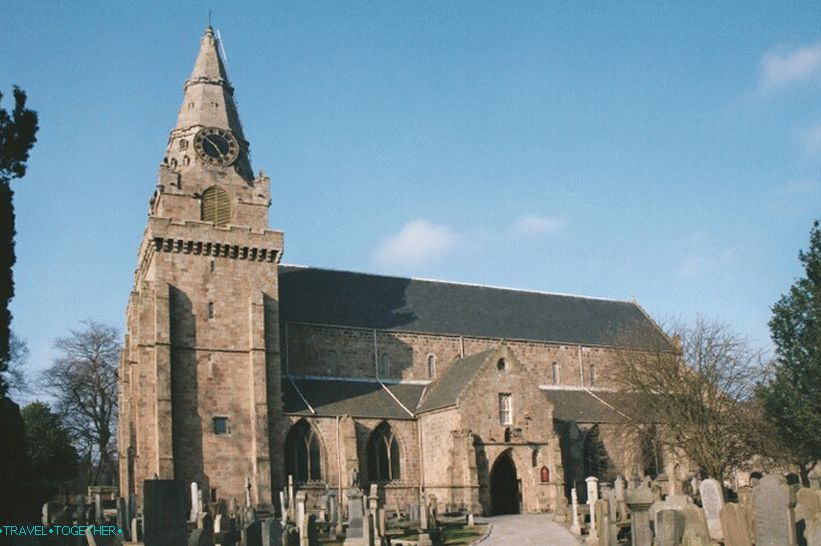 Cathedral of sv. Mahara is one of the main symbols of Aberdeen and a great example of Scottish gothic. This church was founded in 6th century eponymous saints. Further around christian parish grew settlement. The current cathedral was founded in 1136 and finally completed in 1552. Interior for the most part dates back to the 14th century. The most remarkable features of the cathedral: towers 16th century on the west pediment with sandstone and wooden spiers the ceiling of the 16th century, painted with coats of arms. 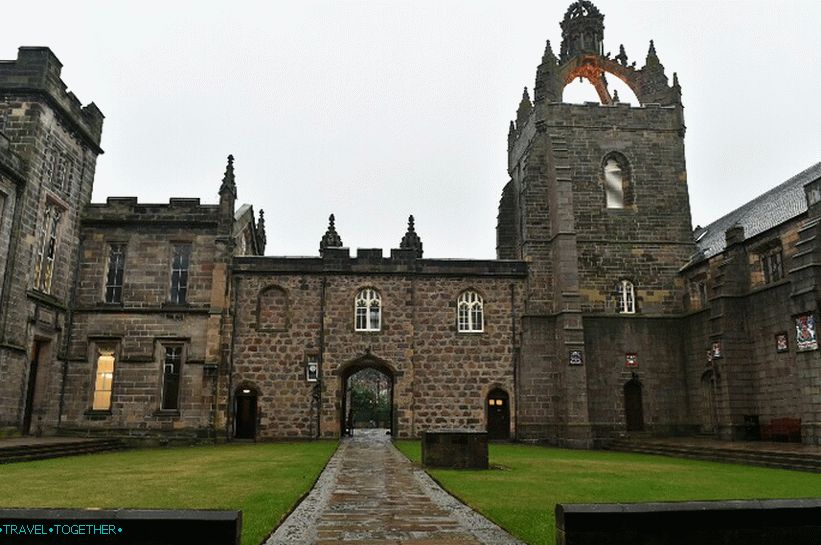 University and King’s College – one of the oldest educational UK institutions, founded in 1494 by King James Iv. The most remarkable construction of this place is 15th century medieval chapel with a tower a striking stone dome in the shape of the crown of Charlemagne. it the only surviving construction of this type in Scotland. 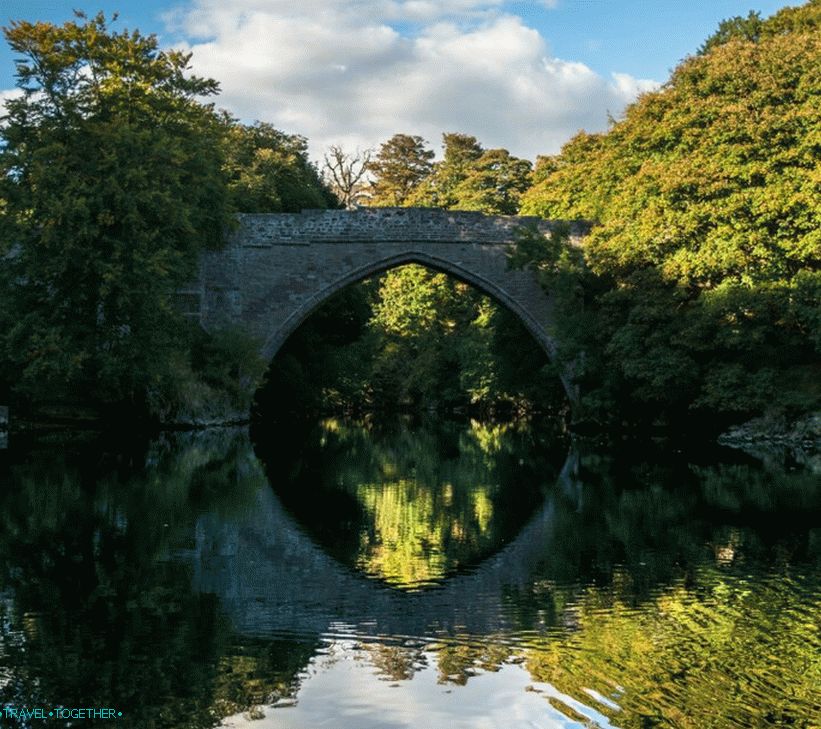 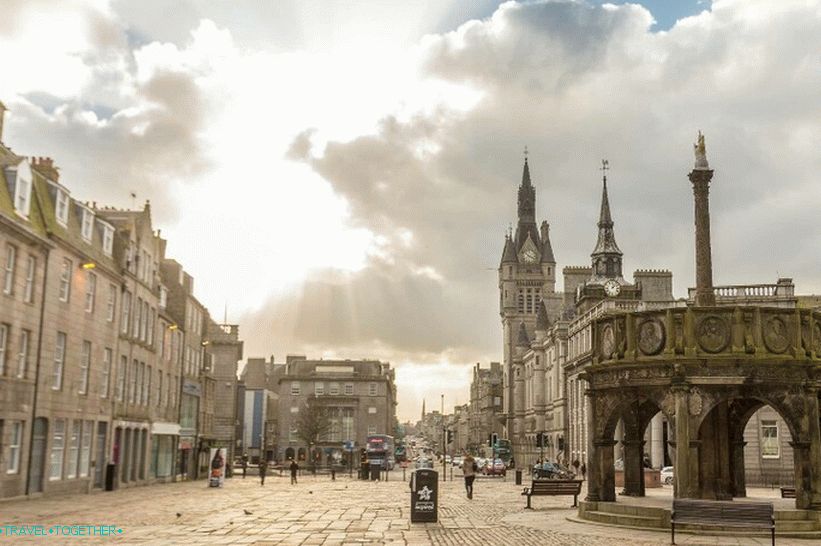 Castlegate (Castlegate) – part of the old medieval Aberdeen, which after centuries remains the center of the city. Square named after the castle gates, although they were destroyed in the 14th century. In the Middle Ages an ancient castle stood on this site. He was later rebuilt in a spectacular gothic mansion. 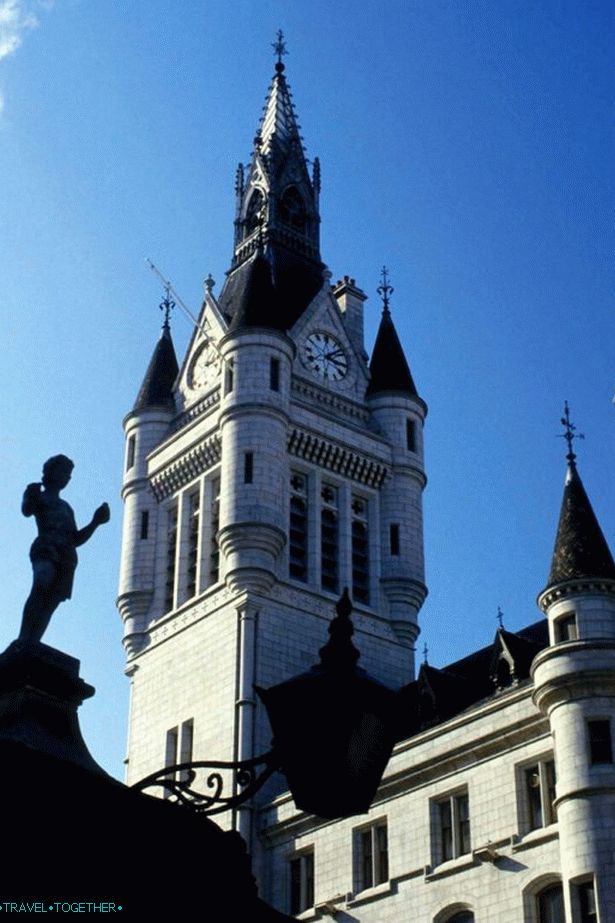 Tolboth Tower (Tolbooth) – the oldest building in Aberdeen, dating from the 14th century. This is the former town hall and prison, which now open museum with exciting exhibits about crime and punishment. 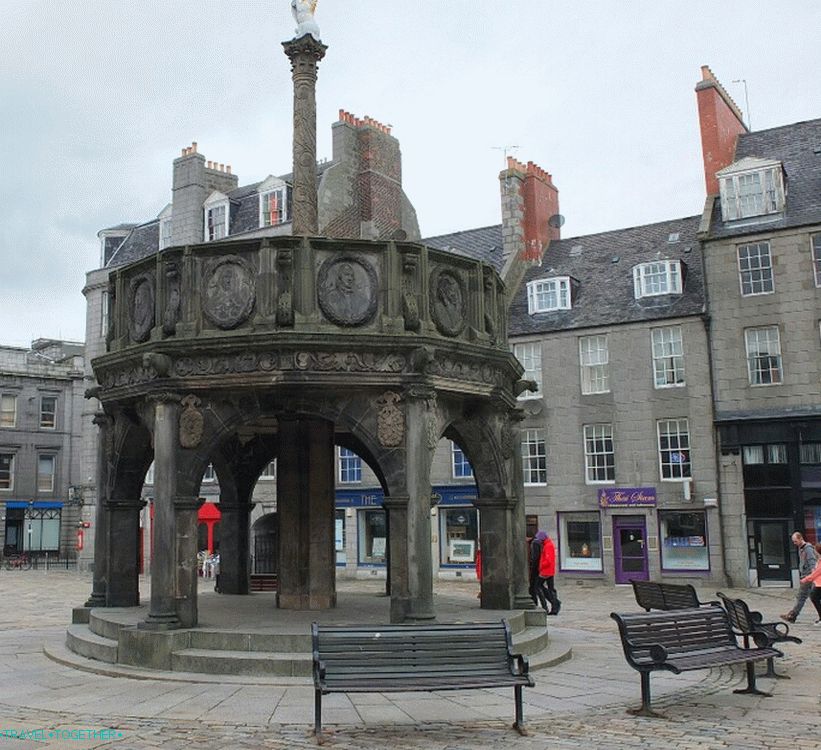 The market cross is one of the main attractions of the area. Caslgate This ancient monument was built by the local guild. merchants in 1686 and is a symbol of market law of Aberdeen. Portraits on the facade depict the kings of the Scottish dynasty Stuarts. 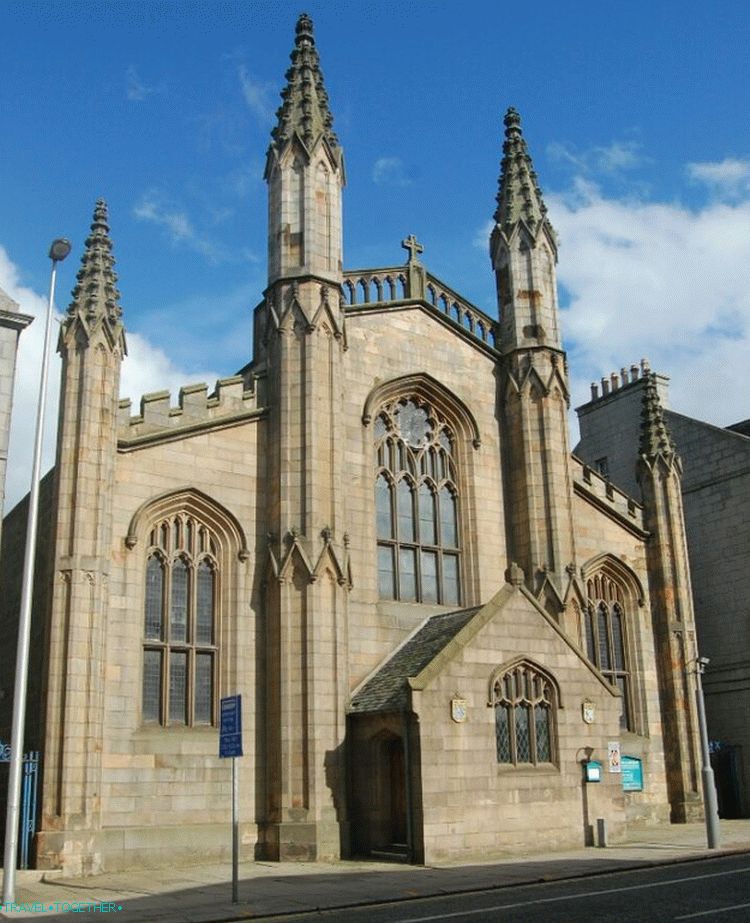 Cathedral of sv. Andrew – a magnificent gothic church, completed in 1817. The building has a granite structure and a beautiful facade of sandstone. Church of sv. Nicholas – an old church with a magnificent gothic tower. This religious building was founded in 12 century and expanded in the 15th and 18th centuries. There is a cemetery adjacent to the church, on which many famous inhabitants of the city rest. 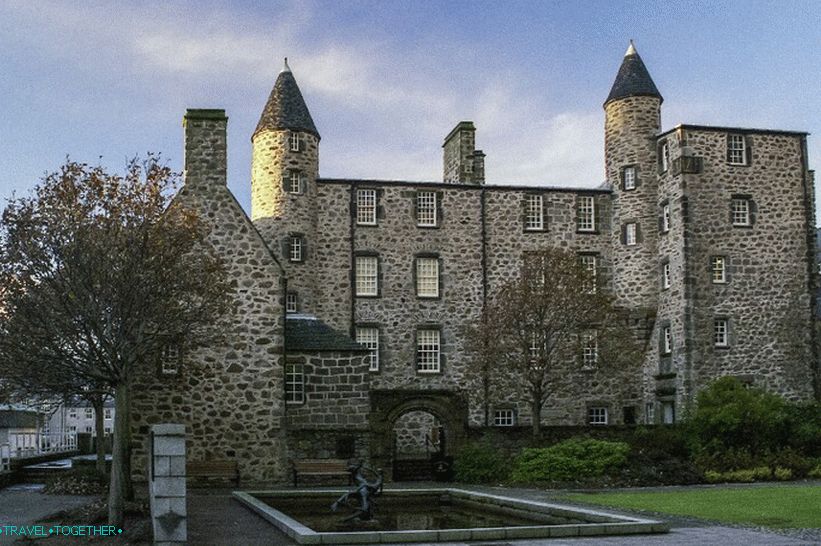 The House of Provost Skene – a magnificent stone mansion of the 17th century, which is one of the oldest buildings of Aberdeen. This house was built by rich merchants who made his fortune on trade with Gdansk. Now here is a museum archaeological finds, religious paintings and historical costumes. 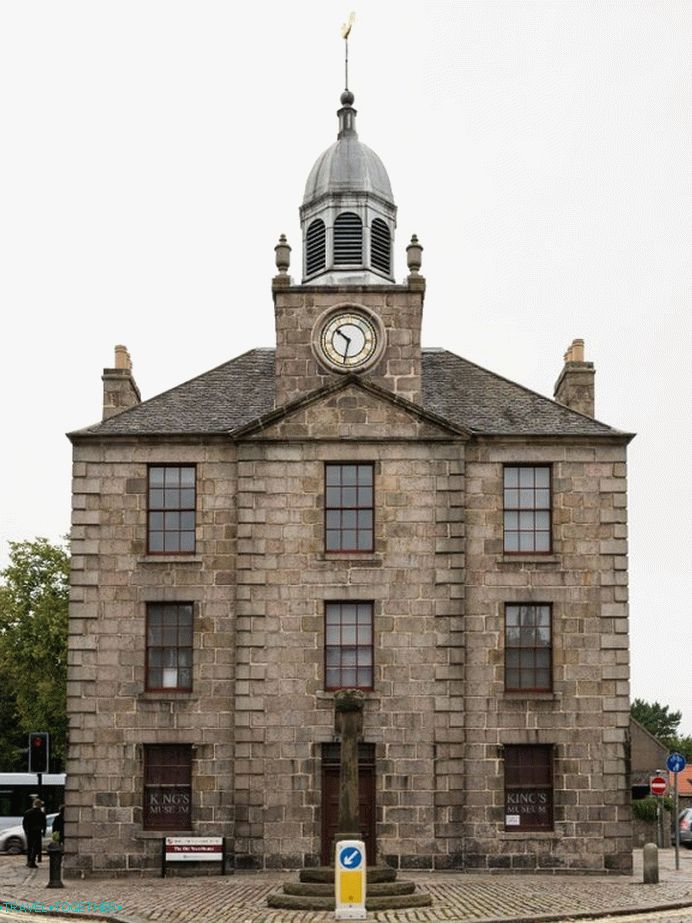 Old Town House – a historic stone building in traditional Scottish style, built in the 18th century in the very the center of Aberdeen. 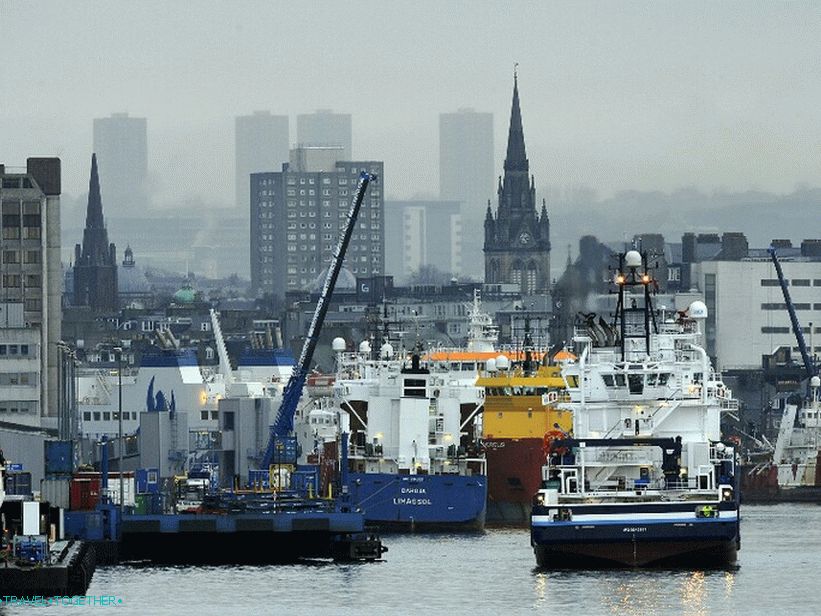 Port of Aberdeen is one of the largest British ports, founded in the 19th century, which annually takes about 8,000 ships and 5 million tons of cargo. Currently one of flagships of the urban economy. 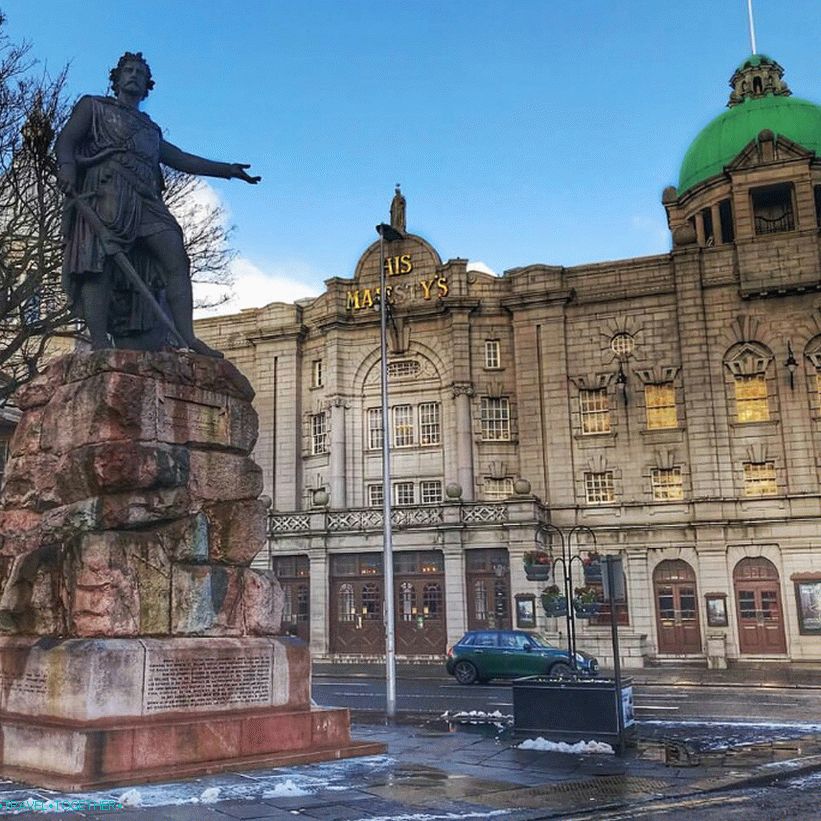 The Royal Theater is a monumental granite building built in 1906. It is the largest theater in northeastern Scotland. 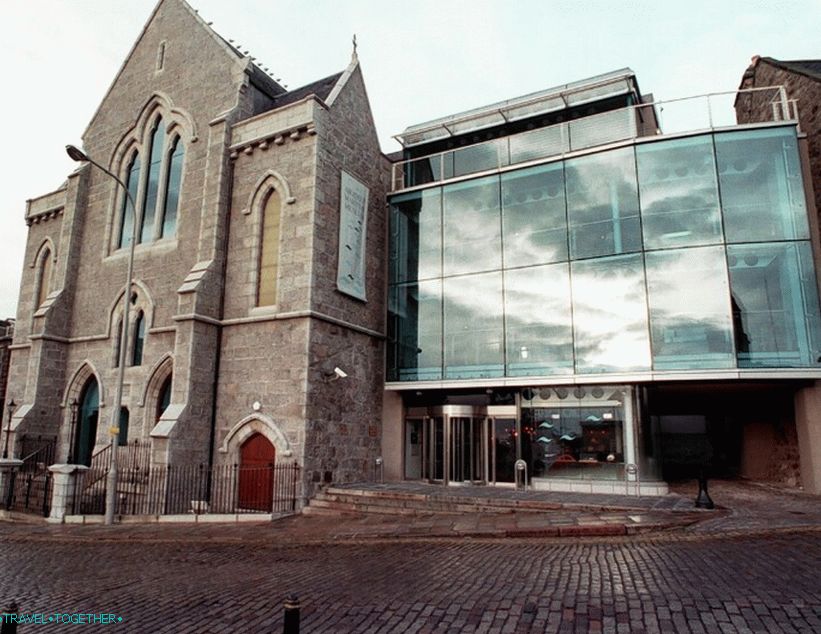 The Maritime Museum is one of the most interesting museums of Aberdeen, which is partly located in a historic building of the 16th century. Contains an excellent collection of models, photos, paintings, documents and other exhibits telling about the development of the port, fish and whaling, as well as maritime trade. 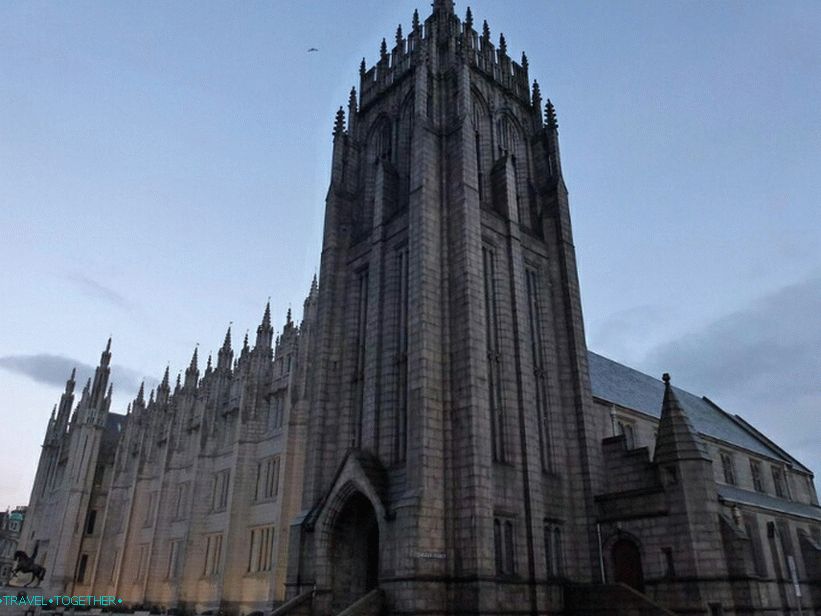 The surroundings of Aberdeen are famous for their many castles. It is estimated that here are a few hundred. Here are the most beautiful of the of them. 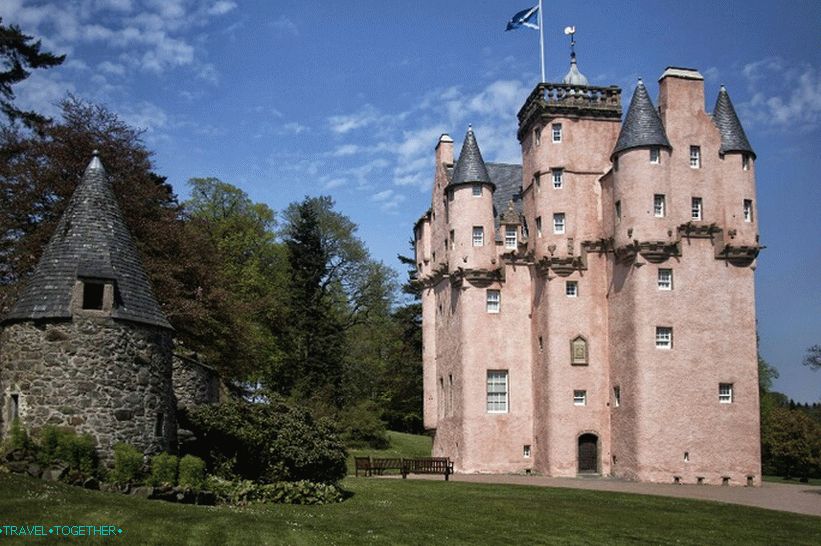 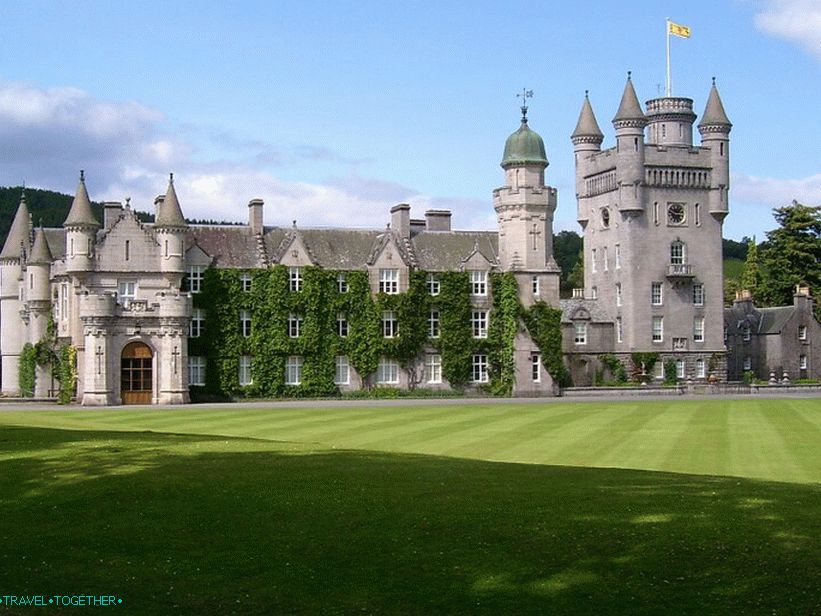 Balmoral is a magnificent neo-baroque Victorian castle, which is the summer residence of the Queen of Great Britain. Castle was founded in the 15th century and rebuilt as a royal residence in the middle of the 19th century. 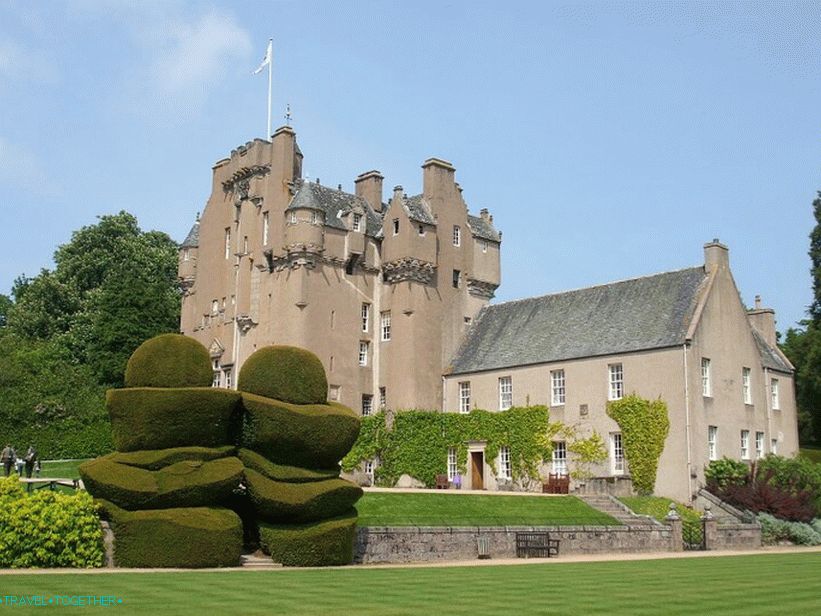 Crathes – a beautiful castle in the classic Scottish style, founded in 1553. It is a large building with cute turrets, small bay windows, corner towers and windows of different sizes.

Aberdeen on the map of Great Britain