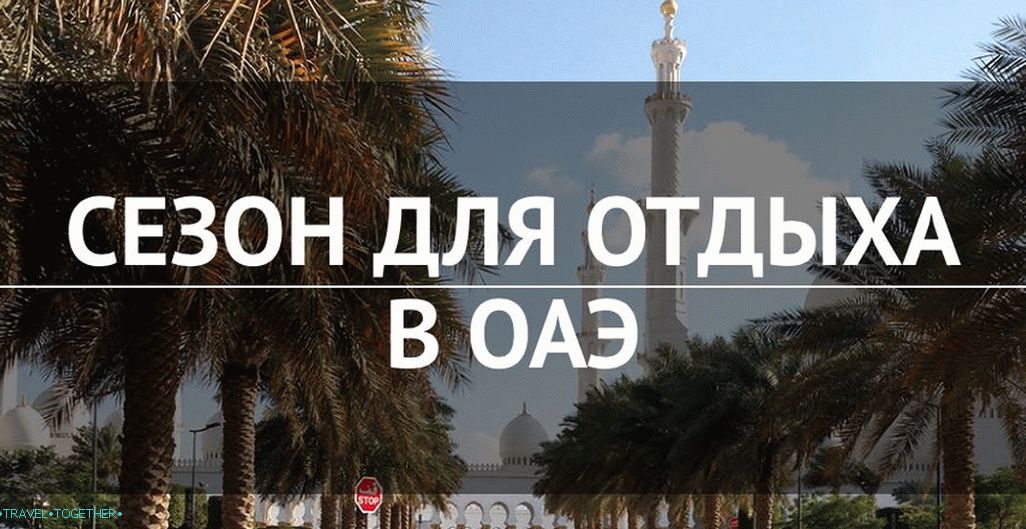 We flew to the Emirates in February. Why I was so surprised This urge to change T-shirt for a sweatshirt, it became cool in the evening. In the UAE theory = heat (desert, proximity to Africa), but in practice It turned out that there can be frozen. There is little confusion excuse: Dubai was the point of a 16-hour transfer, and we cared another country’s weather forecast.

However, unclosed questions constantly spin in your head. because today decided to figure out when to go to rest in the UAE?

Beginning and end of the season in the UAE in 2019

The full bathing season in the UAE begins in mid-autumn and lasts until winter. The following months are “fully” replaced by “partially”, but it reappears since April and lasts until of the summer

Our mini-table will help you navigate and visually assess Season in the UAE by months:

✓ It can be seen that most of the year you can safely go to the Emirates on vacation, but in the summer – better not worth it.

✓ Four months of the year are borderline: June and September – because they are on the border of the seasons, and January and February are the most cold months, swim at this time is comfortable not for everyone.

Emirates is a package country (as long as you don’t fly somewhere independently on Emirates or FlyDubai, with a transfer). AND because the price of vouchers can be good – from 38 000 rubles for a week for two in low season and from 55 thousand in high.

They monitor tours from all leading tour operators and conveniently display options in order from profitable to expensive. Find out, what are the promotional codes.

So you have not decided when it is better to go to the Emirates? Then understand even more.

In the photo on the left, the famous Parus hotel – the beach itself is not for us. liked, it is worth to come for the photo

Why is the title rendered by Dubai? Because it is the most Popular from all resorts in the UAE. Each of the emirates, of course, unique in its own way, but the climate in them is similar. So we will study local weather for months, taking as an example the season in Dubai.

UAE in December, January and February

In December, the weather still pampers the temperature at + 25 ° C during the day. The north winds start to blow, but the water is still warming. to + 24 ° С, and the swimming season continues. December is the best Suitable to visit the UAE with children in the winter. Holiday cost – acceptable, from 35,000 rubles per week for two, only if you are not planning a vacation break. Wishing to celebrate New Year in the UAE Well, a lot, which explains the “wild” prices.

In January, the beach holiday goes to the second plan. This month is a good time for excursions and shopping. Air temperature does not rise above + 23 ° С. At night it becomes perceptibly chilly, only + 18 ° C. Water in the sea – for hardened (Russians, that is), + 21 ° C. It would seem that tours should cost even less, but how would be wrong: the minimum amount – from 40 000 rubles for all the same a week And then after the 10th, at the end of the holidays.

In February, the weather is very similar to January, by March is warming. The sea warms up to + 23 ° С, the first brave bathers are splashing in the water. We went to February in Ras al-Khaimah, it was normal, and sunbathed, and swam. By the way, the Persian Gulf, on the shores of which is Dubai, warms up more slowly. Guest reviews advise in February resorts Oman Bay, for example, Fujairah.

UAE in March, April and May

In March, the real warmth comes. The air temperature rises to + 27 ° С, water – to + 24 ° С. If you decide when to fly to the UAE with small children, we recommend March. Prices are slightly higher than in January-February, from 55,000 rubles to 7 days

Those whom March seems to be not hot enough for a month are worth arrange a trip in April. Average the daytime temperature in spring is already + 32 ° С and at night is not drops below + 25 ° С. Water temperature – + 26 ° С. Until the 10th prices – at the March level, and after rising up to 60 000 rubles.

In May, the hot season returns: the air during the day is + 35 ° C, at night + 30 ° C. Water temperature + 29 ° C. But the popularity of the UAE resorts do not lose – simply because by the end of May the cost of vouchers is reduced to the notorious 50,000 rubles. So if you are going to the UAE in the spring, You want to save money and do not mind “frying” (but do not burn, as in June and beyond) – choose May.

In June, the thermometer can get right up to the mark at + 40 ° C. The water is heated to + 32 ° С and not brings no pleasure. Beach season continues only the most heat-resistant tourists. Sand storms are frequent in the country hammered everywhere. I don’t want to talk about the prices of tours, obviously this This is not worth it (but if you really need it – then from 60 000 rubles for two).

UAE in September, October and November 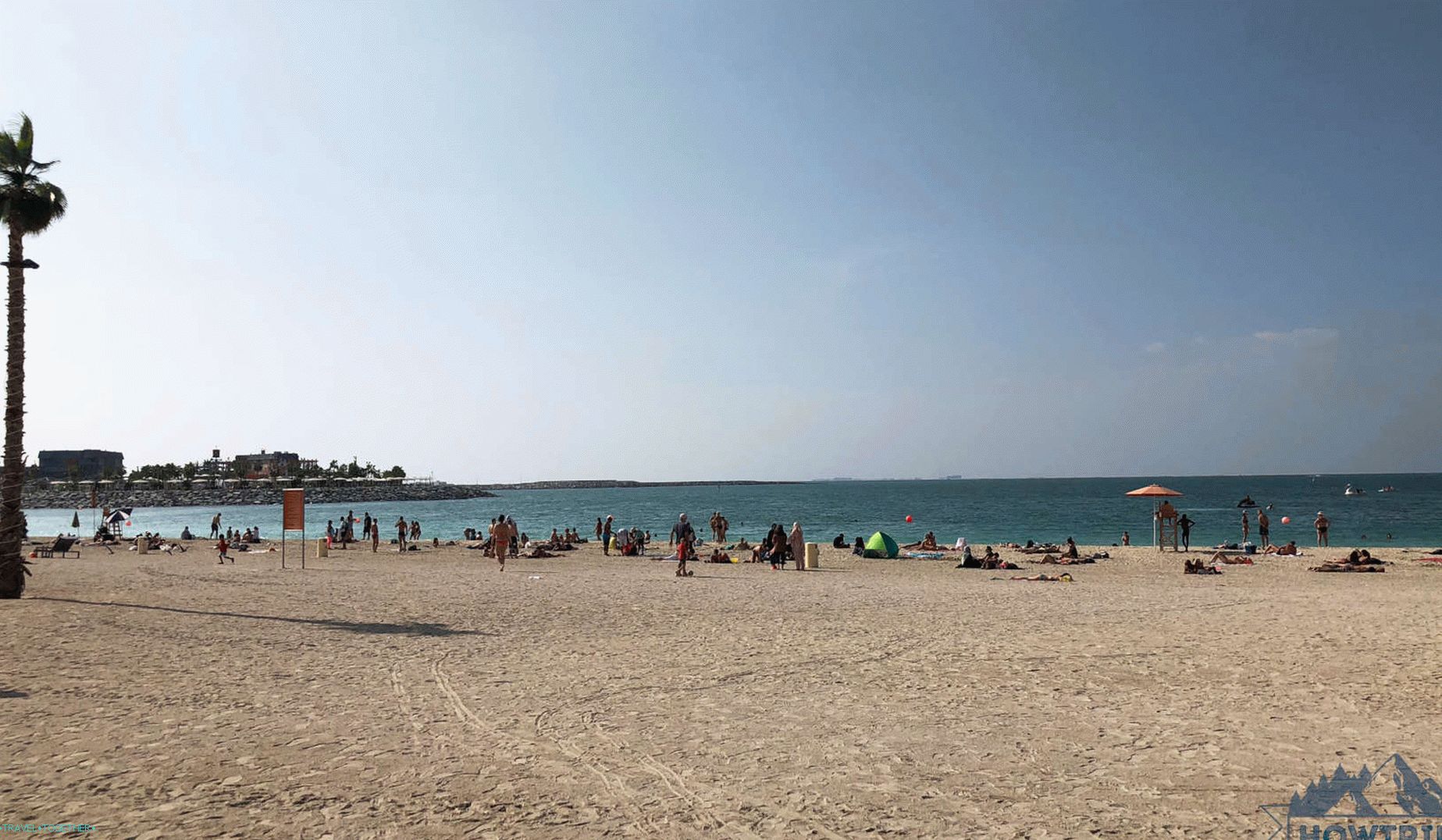 It’s still hot in September air temperature reaches + 38 ° С, and night temperature + 32 ° С. Water in the sea heated to + 32 ° C. Prices for tours this month are quite comparable to summer. Seven-day rest for two will cost from 50 000 rubles.

The air gets cooler in October a few more degrees: in the daytime + 33 ° С, at night + 29 ° С. Already can not only to constantly sit in the water, but also to go for walks. The tourist season is coming. With regards to “all inclusive”: October 2019 you can find vouchers from 125 000 rubles for two for 7 days

If you are going to a family vacation in the fall, but still think, in what month is better to go to rest, my advice to you is to choose October, with its first half. Children will enjoy a mild climate, and parents – not the highest prices.

3-4 precipitations times. This whole “rainy season” absolutely does not interfere with full rest by the warm sea at +28 degrees. November prices hold on October level.

When is the best time to relax in the UAE? Our experience

View from the observation deck with the Burj Khalifa, it is better to take tickets in advance (the site was indicated in the text) and Boulevard Bin Rashid (main pedestrianized street)

Naturally, when not too hot and not too expensive! Under it definition is best suited october when the season is only begins and April, when the season ends. They will share our nomination “best month in the UAE”. Here, so be it, we assign late September and early May.

In general, the author for himself summed up the following: in the Emirates it is good in the most incomprehensible – autumn and spring – interseasonal months in year

What to see in the UAE?

Must visit the most most of all Arab wonders:

In the mosque from this list, as well as in the Jumeirah Mosque in Dubai, Gentiles are allowed free and free (on Friday – the exception closed to tourists).

It can be said that Dubai in the UAE is the only city that is good in any season. Even in summer + 40 ° C there is where to hide from heat, and there is something to do (of course, if you are ready spend the whole vacation in kilometers by air-conditioned mall.

Do not get tired of repeating that the key to a good vacation is careful review of reviews. And for those who are really quite lazy read a multi-book, all the important points I brought in one small such a list:

Why do we like the UAE? Think for yourself:

– a visa is needed, but is being done right on the border – no additional problems and money!

– the tourist season in the UAE begins when in our latitudes slushy something comes, which means you want to bask in the sun even stronger

– how much to fly to Dubai will depend on which flight you are prefer. A direct flight from Moscow will take 5 hours – in principle, not for long

When is it cheaper to rest in the UAE?

For those who want to save money and go to the Emirates is not in the resort the season, the best month may be December or the end of May.

It is also worth paying attention to where to choose the tour. What already mentioned above, the coast of the Gulf of Oman is softer climate than the Persian Gulf resorts (Dubai, Sharjah, Ras al-Khaimah or Abu Dhabi). And Sharjah and Ras Al Khaimah will manage cheaper than futuristic Dubai or the capital of Abu Dhabi.