We focus on the months most favorable for a trip to Thailand. All on business: weather, prices for tours in 2019, features resorts. 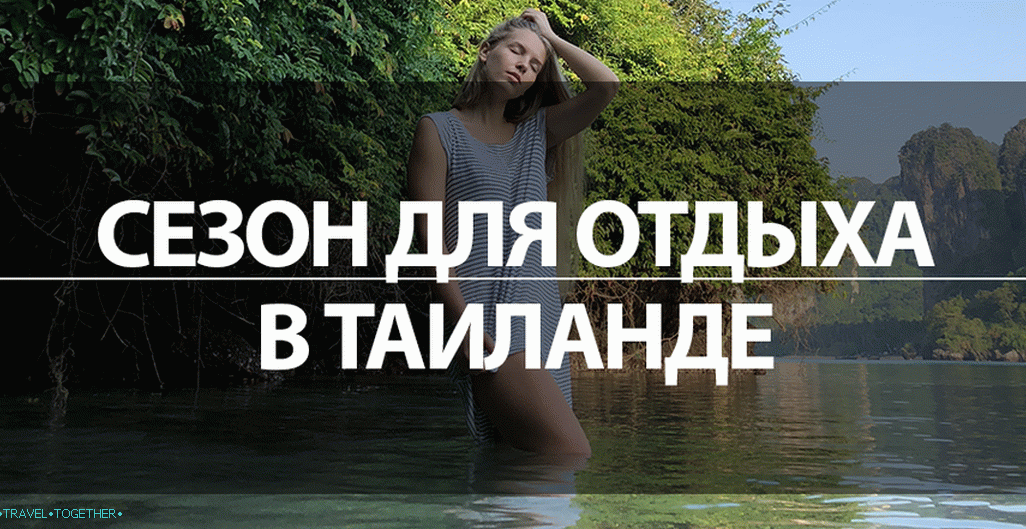 The tourist season in Thailand lasts all year round. However, the question of where and when it is better to go to rest is always relevant. Today we will share information based on personal experience of 3 trips (were on Phuket, Pattaya, Krabi and Bangkok) and of course reviews travelers and bloggers:

For more interest, we note that for 2019 a tour to Thailand on two can be found from 70 000 rubles for 10 days. Where to look for such profitable options? We tell two sections below?

Beginning and end of the holiday season in Thailand

In general, in Thailand, the holiday season is an ambiguous concept. AT December you bask in the sun in Phuket and less in Samui lucky on the fingers are considered “dry” days. In April, you are sorry you conclude that you did not have time for the hot season at the Andaman Sea, and in Pattaya – at the Gulf of Siam – is not getting out of the water at this time.

Up to 3% discount for our readers on Onlinetours on tours

Climate nuances of the resorts, we will analyze a little lower, but for now summarize:

The best months for a holiday in Thailand

By the way, do you use Telegram? About our trips spent money and unofficial lifehacks we share on the @howtrip channel. Drop in

And although the high season in Thailand starts at the end of autumn and is completed in the spring, it is not necessary to categorically treat a trip to summer period.

Do not wait for a tasty offer over and rely on third parties, it is necessary to take matters into their own hands and look for trips themselves! Is it not difficult and even more interesting?

There are three cool and tested by us (and tens of thousands of others travelers) site:

Cool, because they compare the prices of tours at once from all tour operators and give the most profitable options. Simply put, it is How does Skyscanner, just by stays? We explore the right direction on each service, we study the schedule of cost of tours months, we adjust the dates and requirements for the hotel and book what liked it, where cheaper.

As our practice shows, Travelata and LavelTravel help out early booking, and Online Tours is generous with last-minute tours. But it happens the other way around, so it’s worth a look at all three (and check what are the promotional codes).

When is it cheaper to go on holiday to Thailand? Should I buy tour in low season?

Please note that all prices indicated in the article are relevant. at the time of its publication and are indicative.

If you are determined to spend holidays in the tourist season in Thailand, then democratic dates fall out at the end of November-beginning of December and March-April.

A “batch” boom on the beaches subsides only when the season rains in thailand are in full swing. However, airplanes continue supply vacationers who either differ slightly more prokonomnostyu, or led by the low cost of the tour?

In the rainy season in Thailand vouchers really cost budget – the price of vouchers fall from 45 000 rubles to people in January to 34,000 rubles in May. Same story with independent rest. Considering how much fly to Thailand, a ticket cannot be superchip, but still on off-season dates prices go down: from 20 000 rubles Moscow-Bangkok-Moscow (we recommend to search on skyscanner and aviasales).

We advise you to save rationally and not to the detriment of relaxation and choose the beginning and end of a bad weather period. Namely – April-May and the second half of October. Excursion in kayaks in mangrove forests (Krabi) – we are very liked

Should I go in the offseason? Based on our own experience – we Were on Phuket in April and May – we answer that yes, definitely worth it! We recommend that you familiarize yourself with the TOP 10 best places in Thailand.

When is the rainy season in Thailand? Features 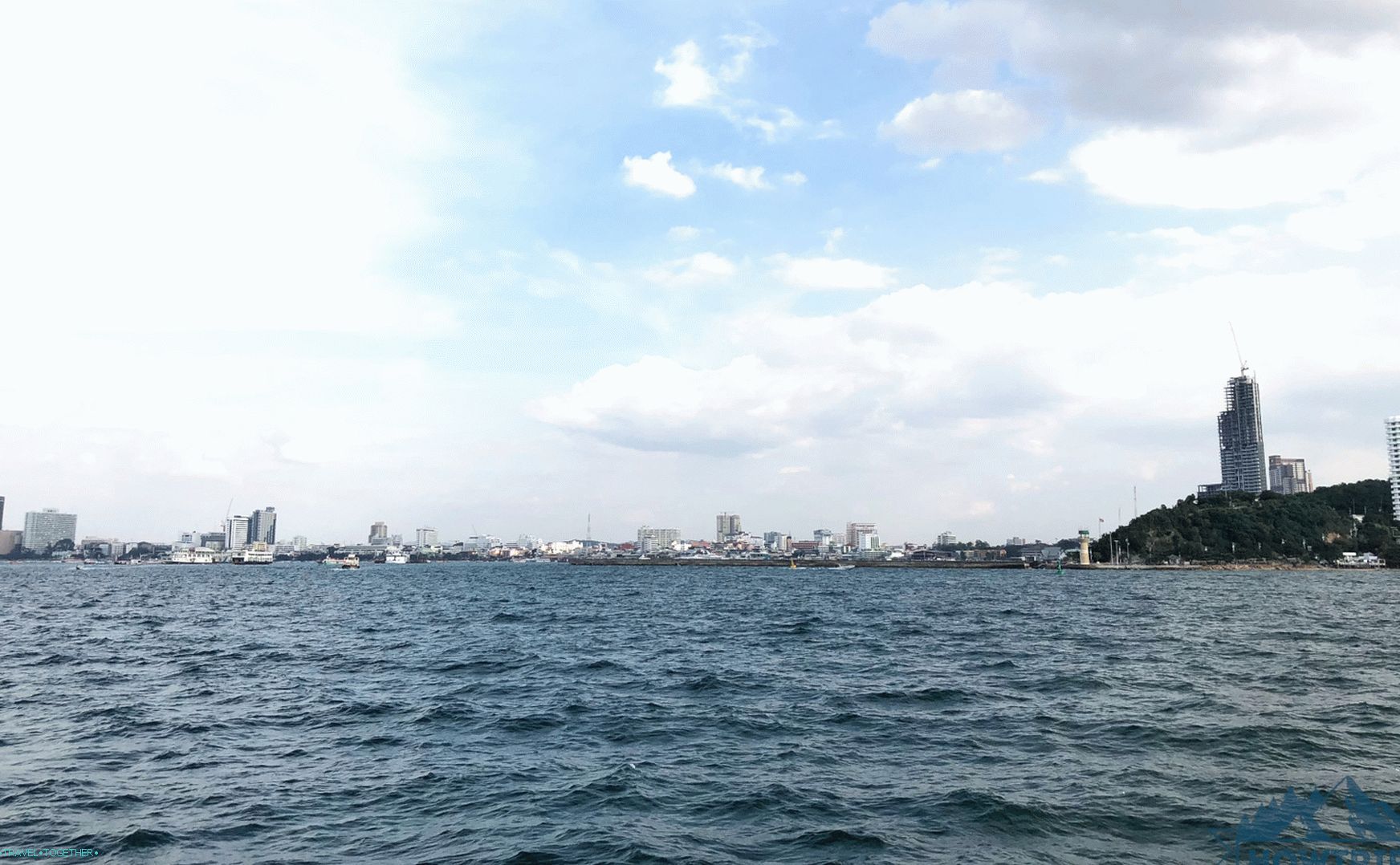 The weather at different resorts in the rainy season in Thailand varies by precipitation by month, so even at this time is available full beach holiday.

Why does the rainy season vary in the regions? Everything is tied to monsoon winds, which bring a change in climatic periods. Due to their different location (the first two are near the Andaman Sea, the second – in the Gulf of Thailand), winds do not arrive according to the same schedule.

By the way, are you still afraid of a big name – rainy season? Then we come to you with the following fact: in January we were helped more, than in may! Approximately 9 days versus 3 (sample of 2 weeks?). TO Moreover, water from the sky usually flows no more than half an hour during the day or 1-2 hours after sunset. The rest of the time in Thai resorts are definitely comfortable temperature, but increased humidity.

Season at popular resorts in Thailand

Clear presentation (but not guaranteed, because it’s unpredictable tropics) about the weather at different resorts and islands in Thailand for months gives a summary table. The most popular tourist destination is the pearl. Thailand – Phuket. Season for relaxing in a truly beach corner of the country It stretches for a long time and is interrupted only for some particularly wet ones. months.

The beginning of the holiday season is November, and the end is for March. The hottest period falls in April and May, but also in these months to spend a vacation is still permissible. In late spring begins rainy season, and like most vacation spots in Thailand, Phuket getting less crowded. High waves and dirty water in June are not beachgoers will delight, but the season for surfers in Thailand is Phuket only inflames. From the second half of October, the island is again acquires the status of the most visited resort. 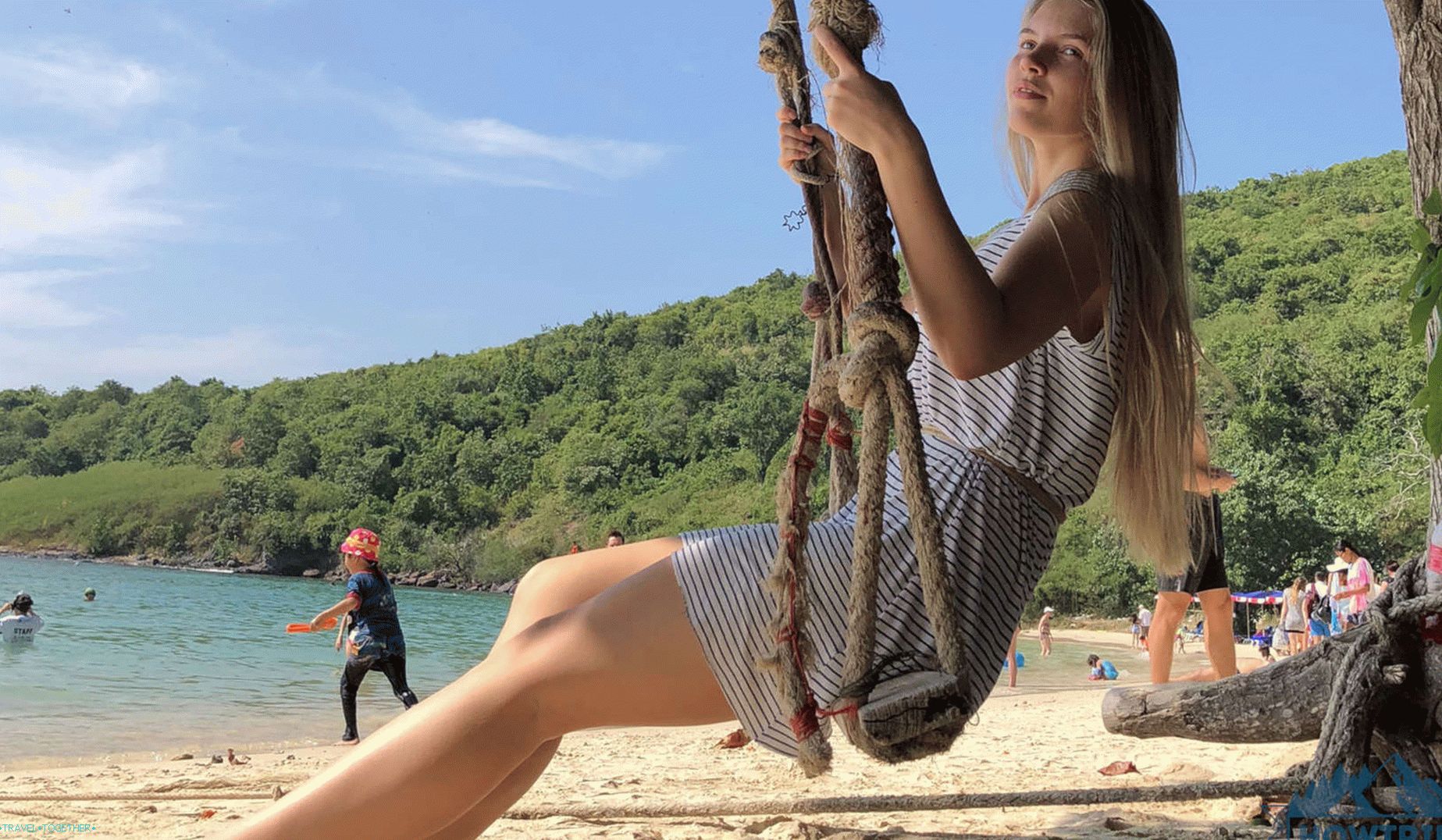 The resort city is located in a bay on the coast of the Gulf of Siam, less prone to monsoons, and therefore the tourist season is not calms down. In Thailand, Pattaya – the center of entertainment and sightseeing routes. Go-go bars, nightclubs, massage parlors and shows for adults – the first thing that attracts tourists here, but also the beach season here is the longest. Due to the geographical location in the city the driest summer, but short showers do not deliver the discomfort.

The season in Thailand in Pattaya lasts from November to mid August The summer is relatively dry and still warm, and so the resort is suitable for traveling to Thailand from June to August.

Are you a few people? Take a profitable transfer KiwiTaxi to Pattaya from Bangkok Airport

It is interesting that in Pattaya there are periods when it is cold for everyone – really cold! A couple of years ago, the temperature in January (seemingly the sun itself) dropped to + 15 ° C! By the way, oh unpredictable weather?

On the islands of the Gulf of Siam, which include Samui (Thailand), the season best suited for recreation begins at January and continues until the end of September. Since October the swimming season can be considered closed due to heavy rains and storms. The amount of precipitation will begin to decline markedly in January, and in February Samui will turn into a heavenly blooming corner. Spring on Samui – not only low prices, but also an abundance of exotic fruits. НаApril is mango season, and in May you can already try durian, mangosteen, rambutan and other exotic ones that are not available in our latitudes.

Weather in Thailand for months

Having understood the seasons, hot and humid, let’s consider weather in Thailand for months. And although within the same time of year temperature values may fluctuate slightly, the difference in sensations are still there.

Thailand in December, January and February

Thailand in winter is rave reviews of tourists who have been to paradise. In the coldest months in Russia, the height of the bathing season the season on Tae, the weather is stabilizing, the rain is almost not it happens. The sea is calm and clear, the water warms up to + 26 ° C … + 27 ° C.

Winter is the highest season, and its peak is at the end December and early January. Read more about holiday in Thailand in the winter.

Thailand in March, April and May 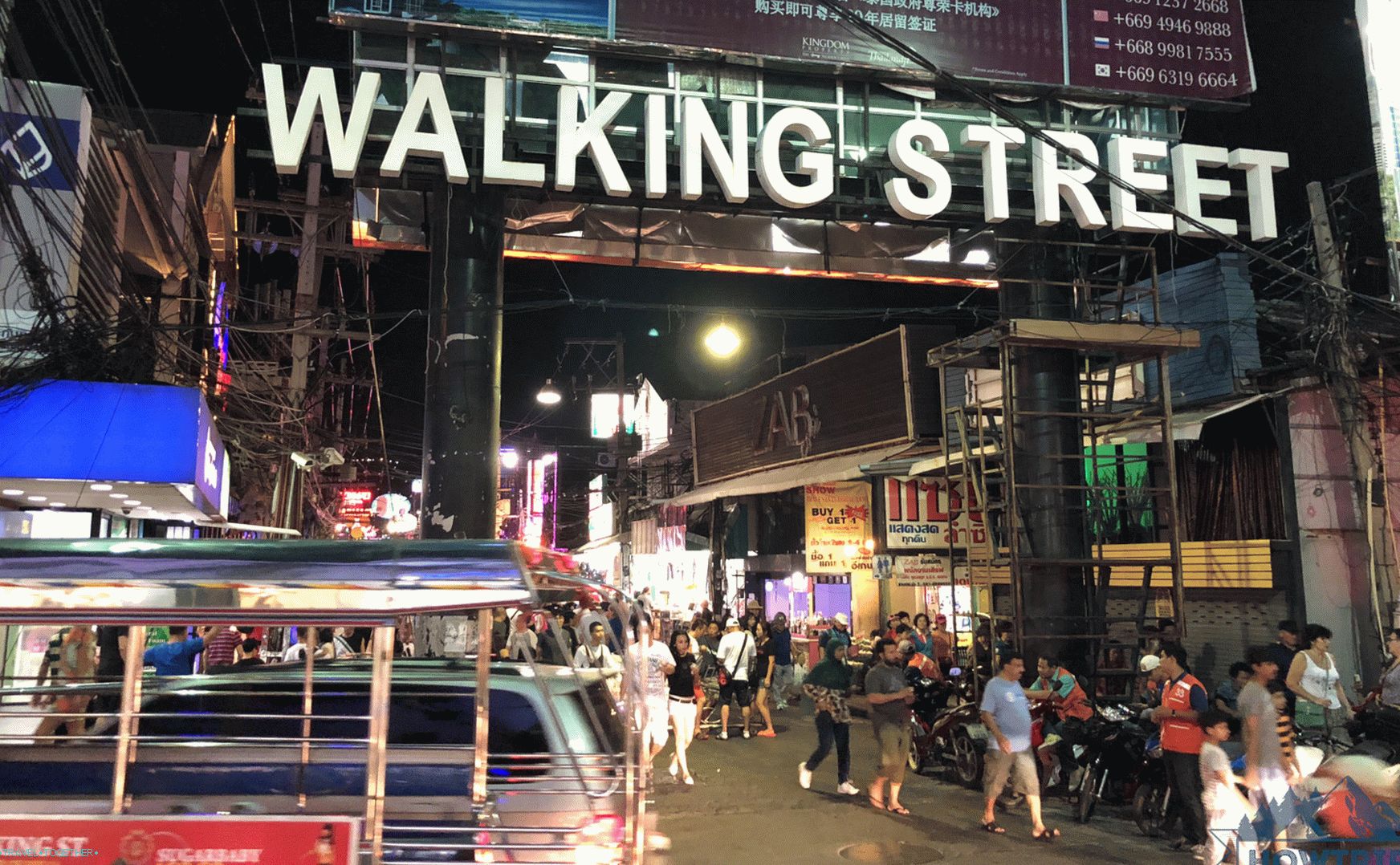 Thailand attracts tourists in the spring with more profitable tours and plenty fruits. At this time, the weather contributes both to a beach holiday and excursion programs.

During the daytime t air:

In March, the swimming season is in full swing, but in April in Thailand it gets hotter and the humidity rises.

If your plan is to go surfing, better go to Thailand in the summer. The low price of summer season trips attracts here are athletes from all over the world, although there are plenty of resorts sunny days and for beachers.

The sea at this time is often restless, the weather is changeable, but tropical rain showers are short-lived, and bright light shines behind them. the sun.

Thailand in September, October and November

Thailand in the autumn, especially in September, can not boast great weather but remains just as attractive for tourists.

The average temperature in the autumn in the daytime:

Already at the end of autumn the velvet season comes, and a ticket to Thailand will cost much more expensive. If you want to save, the second Half of October and the beginning of November is quite suitable for this.