Making a Schengen visa – a sequence of simple and clear action. It seems to be. I went to the official website of the country’s embassy, downloaded the list of documents, collected them, passed them to the visa center – received visa

Where is easier? – think Europeans who do not know that wages There are three colors, and money can be stored in three-liter banks from under the compote.

Confirmation of financial solvency – a sore point for many Russians gathering abroad.

Who needs a sponsorship letter?

Include a visa sponsorship letter in your must-have package documents should be:

It is widely believed that the sponsorship letter for the Schengen Visa is an alternative to official sources of income. I.e work. In fact, the letter is a substitute for a bank statement, those. financial guarantees.

IMPORTANT: if there is a good bank account (from 100 000 rubles), a sponsorship letter is not necessary for any category of the above. Sponsor is needed when a tourist own funds to stay in another country do not.

LIFEKHAK: if the account is empty / not enough money, and the sponsor look awkward, maybe your good friend / relative lend the missing amount – throw it into the account and make a statement. After Can I immediately remove and return? 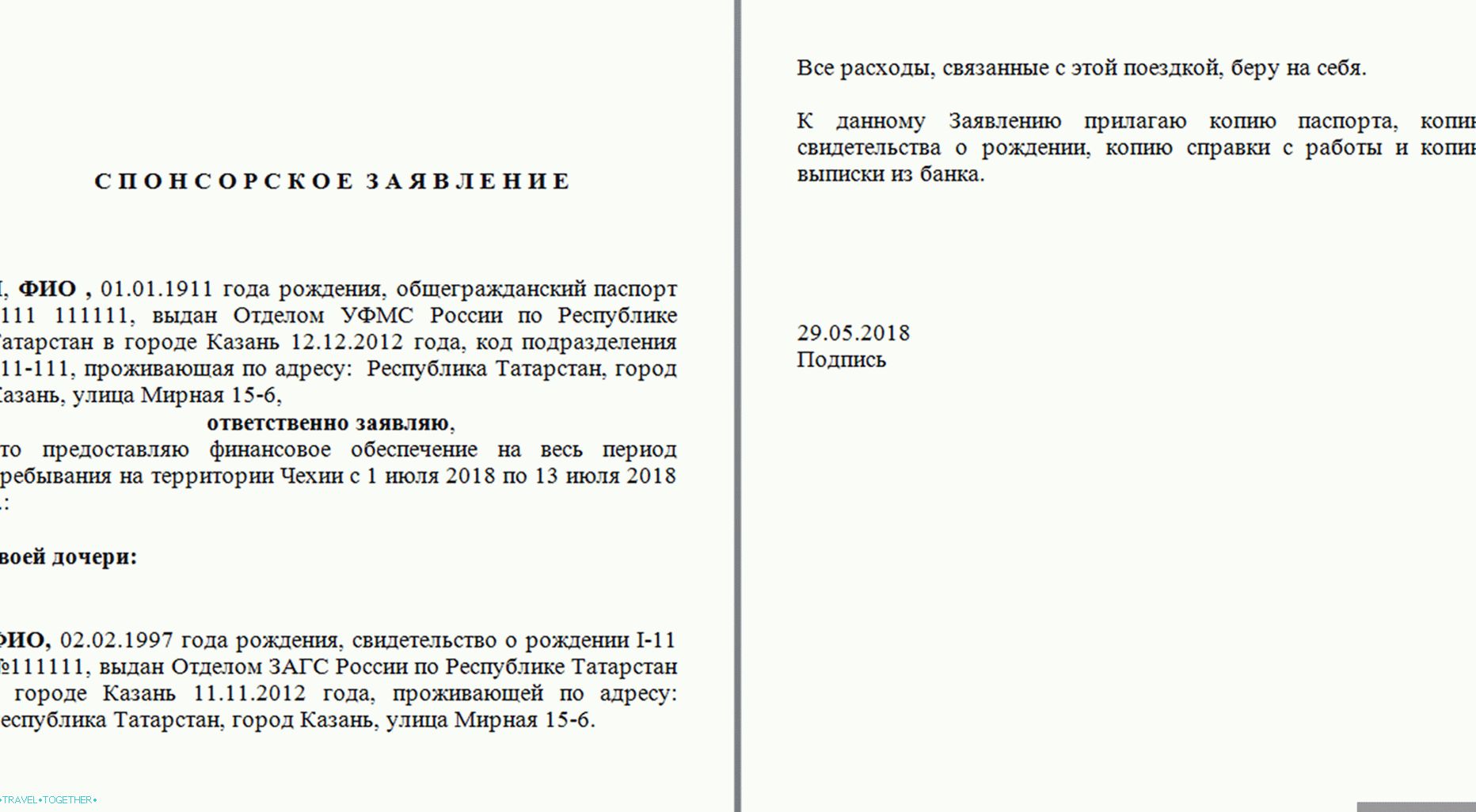 To minimize the risk of being refused a visa, the potential the tourist must prepare a standard set of documents:

Who can be a sponsor?

Different countries adhere to different rules regarding who can act as a sponsor. Visa centers Italy, France and Germany insist on mandatory relationship between the sponsor and the applicant.

Spain, Greece, Czech Republic more loyal: sponsor Anyone who has the financial capabilities, including NOT a relative.

UK views as sponsor organization, relatives and friends of a visa applicant, which during his stay in the GB will also be located on territory of the country.

How to write a sponsorship letter? Statement is made in free form and printed out. Sponsor signs in person. Before writing a letter you need to check on the site of the visa center of a particular country, in what language are they accept documents for consideration.

General points that should be reflected in the sponsorship letter:

Do I need a letter from the sponsor to certify notarized? No no need. Such document requirements Schengen countries do not push.

A sponsorship letter for a visa to Spain can look like this So: 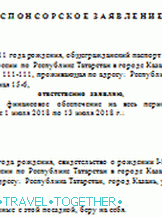 You can provide a sponsorship letter to Spain in Russian or spanish. To the Czech Republic and Greece, the sample will look also except for the name of the country.

Where to find cheap insurance for a visa?

A frequent mistake of many tourists is buying insurance. directly in front of the visa center or inside where far from the cheapest deals. Making insurance online is a business 5 minutes and a few hundred rubles. Go to the site, select the desired option and drive your data through a smartphone.

On my list are three proven services; every time I compare, where conditions are more profitable:

Insurance for 7-10 days costs 500-800 rubles. I usually I make a choice in favor of reputable companies that have no problems with payments in insurance cases. For example, AlfaStrakhovanie. Wherein their price is quite average. More economical option offers Uralsib. Of course, for a Schengen visa is suitable for any, most importantly, what would cover from € 30,000.

In addition to the sponsorship letter for the visa, sample 2019 which is presented above, the sponsor must provide in Visa Application Center has the following applications:

Features of writing in different countries of Schengen

Despite the common area of visa control, the policies of different countries The EU’s requirements for sponsors are different.

?? You can issue a sponsorship letter to Italy only on condition joint travel sponsor and those he sponsors. it must be confirmed by booking tickets and accommodation. Sure to presence of kinship. The sponsor must be either a parent or a spouse. person requesting a visa. Writing language: English or Italian.

?? Travel to France of the visa applicant and his sponsor is not must be joint. However, the French also insist on close family ties (parents, children, grandparents, spouses). All accompanying documents must be in English or French.

?? ?? ?? Sponsorship letter to Greece and the Czech Republic is similar to Spanish. These countries do not insist on kinship with the sponsor. Pay trip maybe not a relative. Acceptable document in Russian.

?? The UK which in the foreseeable future may cease to be a member of the European Union, does not apply to the Schengen zone. British require to issue a separate visa. And you need to take up this business, armed with knowledge of the English language. Because all the information The official website is in English. By itself, and sponsored the letter is written in the language of Shakespeare.

Sponsorship letter to the child

One of the most frequent cases when sponsorship is written letter – getting schengen for a child. Features of Russian the reality is that minors rarely have an account in the bank. Although some European countries (in particular, Norway) emphasize the priority of their own financial guarantees for each traveler, including children, most often in these cases, the sponsor favor one of the parents.

If the child still has an account with sufficient funds for the trip, a sponsorship letter is not needed. In addition, the parent may not issue a letter if the child is under 14 travels with his father and mother. what confirmed by booking tickets and accommodation.

Sample Sponsorship Letter for a Child

Sample Sponsorship Letter for Child Schengen Visa 2019 is not much different from the same document for an adult. You can download the sample above, adding to it a phrase about the relationship with to minors.

If a family member is sponsoring several man, you can write one letter, listing there to all sponsorship is required.

Personal example: in November 2017, I designed a Spanish visa for myself and baby. I do not work, neither I nor the child has a bank account. The husband wrote us a sponsorship letter (one for two), provided certificate of income from work, bank statement for last 3 months and a copy of the passport with an open Schengen. Visas have given.

In a number of countries – Italy, France, UK – sponsored the letter must be written either in the native language of the country issuing visa, either in English. No need to fear this and order Translation into a specialized bureau is also not necessary. AT On the Internet, you can easily find a sample of a sponsorship letter for a visa on English

Completion of the application must be made according to international passport 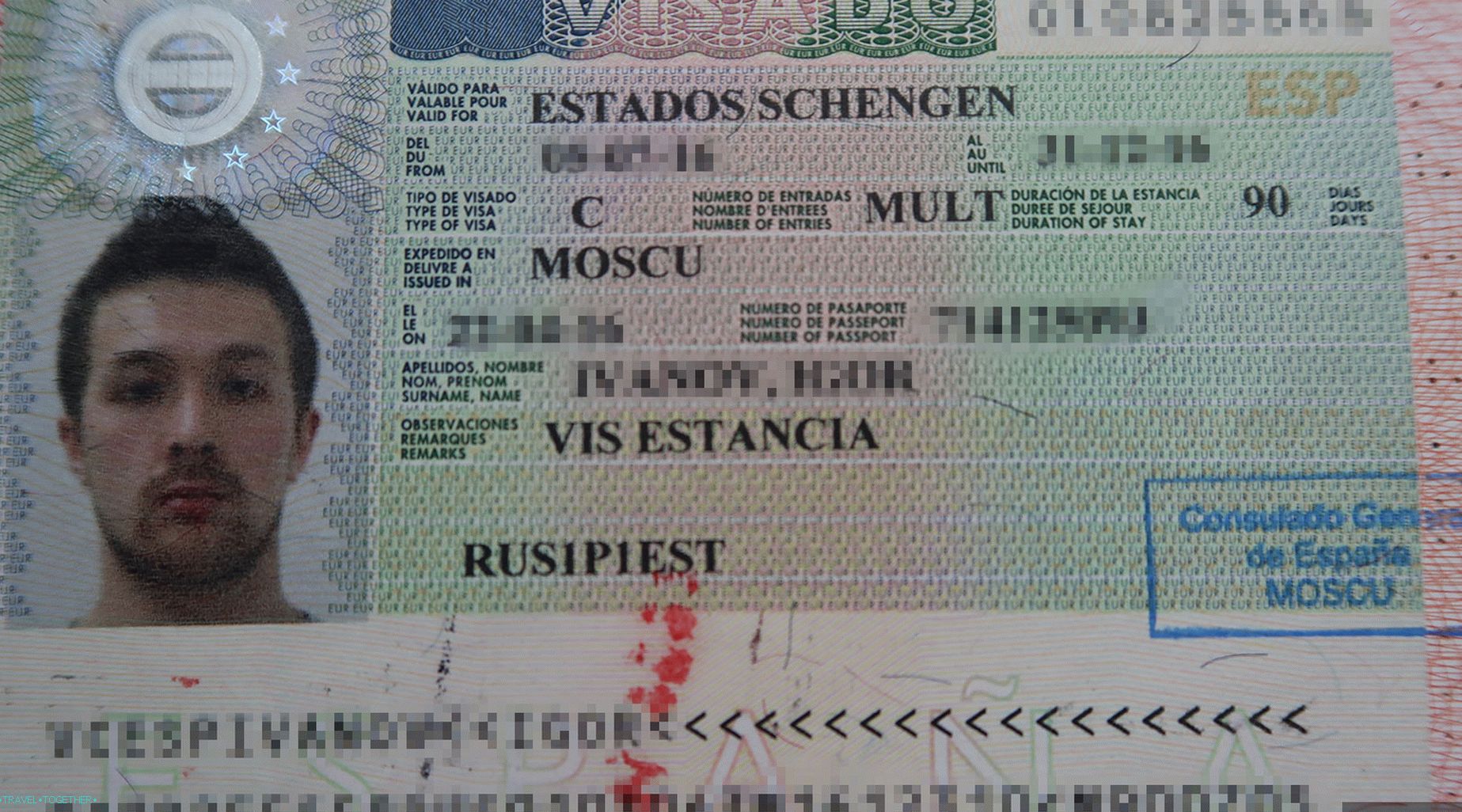 ✓ When in doubt about the need to provide sponsorship letter for Schengen, it is better to clarify the information in consulate of a particular country. The policies of different countries in this matter may vary slightly.

✓ Understand what everyone can do. Internet and appropriate motivation. No need to think that agencies offering their visa services have any special knowledge and powers. The system is designed before total for private tourists.

✓ Life hacking for the benefit of advance preparation of documents. Never (!) Take pictures in the visa application center without weighty reasons. grounds. There is no photographer who tilts his head to the desired the side. It is automatic. The necessary picture can be done hardly with third time. And not all! Unsuccessful attempts are paid.

✓ The main points on which the “novice” tourist can “cut off” is:

Having spent a couple of hours of time studying the issue, you can save not fabulous, but a pleasant amount of money. And spend it for an extra bottle of wine in the same journey.