Spent 7 hours in a not very comfortable place called New Istanbul airport. We managed to be surprised, disappointed, angry, and of course, calculate how much time all important ones take routes. For example, from a plane to baggage claim or just taxiing ?

✓ We visited Istanbul Havalimani in April 2019 – flew in from Los Angeles and waited for the connection to Moscow. But the article is constantly update.

✓ It is being built since 2015 – the reason: Ataturk’s expansion is not it turns out – and will continue until 2023. Positioned as the largest in the world!

✓ Opened in October 2018, but Turkish Airlines (Turkish Airlines) and all the others solemnly “moved” to the new international airport only April 5, 2019.

✓ Ataturk Airport is being closed.

Where is the new Istanbul airport located?

In the north – the new airport Istanbul, in the south – Ataturk, already old

If it is generalized, then in a wide field beyond Istanbul, where there is no nothing. And if specifically, in the suburb of Arnavutköy, whence distance to the city is ≈ 40 km to Taksim Square and ≈ 50 km to Sultanahmet.

How to get from New Istanbul Airport to the city itself – no problem, often there is public transport, plus taxis and transfers I will tell about this below, but for now:

Airport Features – What Have We Noticed?

Entrance to the new airport and flight check-in desk

We did not go through the test of the short docking, but it happened to our friends. And although the security check went pretty quickly, and time, in principle, was enough (1.5 hours), they advise taking a flight with transplanting at least 2 hours. Just in case. Airport new, aircraft delays / queues / anything else is likely.

New Istanbul Airport (IST) is so big that reviews say that from the moment of landing until the plane stops half an hour goes by. It’s hard to be objective here – different bands, gates, terminals. I will say that our Boeing-777 taxied exactly 10 minutes

Facts about the airport.

✓ Upon arrival, the exchangers – Exchange – begin at the baggage claim, work around the clock. Immediately huge duty free. Island with ATMs – ATM – located opposite the Hotel Desk.

You can exchange currency or withdraw cash in several places. at the airport – also in all cafes for payment accept euros and dollars

✓ Escalator to the bus stops also opposite the Hotel DESK

✓ Location of the Hotel Desk (where they apply for a free hotel) from Turkish Airlines, more details – below): go to the arrival hall at green / red corridor, turn right, you need to walk to the very end.

✓ About wifi: in the Departures room it works fine. Something like IGA_guest is called, you must enter a phone number (Russian just after 7), receive and enter a message with a code. It will give an error, but it will connect

✓ At the entrance to the New Istanbul Airport, as in Ataturk, everything pass inspection of things. They need to get a laptop ☹

Entrance to the airport from the street – you can enter as on the 1st, so on the 2nd floor

✓ On security check after passport control – hurray! – do not ask unshoe.

+ The airport is clear and simple, difficult to get lost. Pointers volunteers, traveler – everything is fine. Distances to some gates are large, for 7-10 minutes, then how lucky.

– No halls priority pass. And judging by their responses, coming months will not appear. This is odd considering the hype around relocation of all and all of the airport, which should hit their scope, lasted since winter.

+ People are few (yet?), With Ataturk not to compare. Maybe they competently dispersed. Although lying sideways / sleeping / contemplating on the floor comrades are already here.

– There are unfinished rooms like crannies, where not everyone wander, whitewash falls, rolls construction debris. In some toilets, for example, at a food court, soap tapes are present, and soap itself – no. Around the tables in the cafe stick rolled up with tape O_o wires

+ What a surprise – cool information racks. We approached this find a restaurant, enter the name, and then a huge the girl’s face, saying in English: “Hellou, can you hear me? How can I help you?”. At first it seemed like an advertisement – well, you know, like Hello, welcome to our cool airport, etc. It turned out This is an online operator

The new airport of Istanbul and the metro are incompatible. There are no subways, but construction is already underway. Promise to end 2019!

We did not recognize the price of a taxi, and the tourists who used local services, forums are not announced. The only thing that It is known for sure – especially impudent drivers may require additional payment even over the counter, because “go too far.”

A reliable option is a transfer: it is paid in advance, and the driver meets at the designated time with a sign on which proudly flaunts your name, and delivers to the door of the hotel.

Transfer from Istanbul New Airport can be booked. previously:

To a certain extent, this is the fastest way to get to hotel – from 40 minutes and further on the situation with traffic jams, because not IstanbulCard problems, waiting for the bus, negotiations about prices (about taxi).

Frequently asked about the New Istanbul Airport – how to get to city center is simpler and cheaper. For such a universal answer – buses. They go to Sultanahmet, to Taksim and on other 18 directions. On the way 40-80 minutes (no traffic jams / there are traffic jams) + this the cheapest way.

There are two carrier companies to choose from:

Schedule, landing / landing sites and the exact cost can be find out on the IETT website (ibid. about Havaist): www.iett.istanbul/en/main/pages/access-to-airports/798.

You can pay for the bus fare ONLY with the help of the Istanbul Card. And replenish / buy it (6 lire) – by cash or by credit card in machine at stops. BUT: the map, according to reviews, it happens, does not work. Where to get-get cash I described in the section “Facts about airport”.

By the way, Istanbul Card is allowed to use one for several person.

The brief scheme is as follows: We got to the baggage claim → changed money → went to the arrival hall (or rented here at an ATM) → go down to floor below → buy / replenish card → take the bus.

To the note: if you were already in Istanbul, and the card was lying around table, check its expiration date. Our one and a half year old worked!

Rental offices are open. You can rent a car from $ 29 per day, pre-booked on RentalCars. The longer the term, the less price for rent.

The new Istanbul airport has not yet agreed with the priority pass. Or they are with him, not the point. It is important that the n-hour transplant is comfortable, as far as possible, do not hold. Have to huddle in the cafes or in areas of sofas (which are permanently occupied).

However, there are lounges themselves at Istanbul Airport. At this there are two moments:

We took the photographs of the Turkish Airlines VIP Lounge back in Moscow, it is already impossible to enter Istanbul without a flight in business class. But you can get into the IGA which left

Where to stay near the airport? Hotels

Remember the beginning of this text? “In a wide field beyond Istanbul” … Near not that the hotel, the settlement will not be found.

But the air harbor is not the animals still planned, and a place under The hotel at the New Istanbul Airport has been allocated. Called YOTEL Istanbul Airport, located in the “dirty” (accessible to all), and in the “clean” (only for passengers) zone, is considered the largest airport hotel in Europe. Price list – O_o: from € 160 per night two without breakfast.

More reasonable options – for 35-50 euros, but in Istanbul – Look for RoomGuru or Booking. Through the latter can get a discount of 1000 rubles!

How to get a free hotel from Turkish Airlines?

We took advantage of the offer in March still in Ataturk, the day before “grand relocation”. In the new airport process with the hotel passes exactly the same as in the old.

Yes, the airline provides a hotel room. completely free if transplanting in Istanbul from 12 (layover) or from 20 hours (stopover), both flights are international and run Turkishami

I never went into details about the difference between leuover and stopper. I see in the ticket docking at 20 hours and 10 minutes – I go for the hotel

Illumination came down this time when we were denied free night.

On the Turkish Airways website, the easiest is the info that “if you are in Istanbul for 20+ hours and you want to see the city, then write for a week in the mail, book a hotel for you. ”

1) Last year we flew from Samara to Hong Kong with a stop in Istanbul at 21 o’clock Have sent a request to email on that there was a request to approach the Hotel Desk at the airport. Okay come up. We organized a cool hotel nearby (it was still in Ataturk) and transfer.

2) This year the route was Moscow-Los Angeles with a change in same 21 hours I doubt write-not write on mail, again come to that desk. But still wrote. On surprise, they sent a voucher to check into a hotel in the center of Istanbul and reminded that you need to get to it yourself.

Akgun Hotel for reviews did not look very good, and we decided to check at the airport, it suddenly falls out better. Man at hotel desk long studied our ticket and delivered a verdict – “but you are not supposed to hotel, you could take a flight from Moscow for tomorrow, and would wait 3 hours. ”

Good thing we didn’t throw a voucher to Akgun?

At the New Airport, the Hotel Desk counter is located at the end on the right, as you exit the green / red corridor.

How to get a voucher for food and excursion from Turkish Airlines?

✓ Tour of Istanbul. Condition: change of 6 hours, without flight reservations early. Everything is decided at the Hotel Desk.

✓ Meals at the airport. Condition: change of 5 hours. Food voucher issued in Care Point – in the hall of international departures it is opposite gate A2 or D1.

You can eat at Burger King, Sbarro (pizza) and Popeyes (burgers). Stomp to the cafe for about 10 minutes to the other end from Care Point. We considered that the voucher is about $ 5 (in BC it’s a little fries, water and medium burger).

Consider that for fast food and malice have to kill at least half an hour to get a piece of paper, 10 minutes to walk with suitcases, backpacks and another 40 minutes to to order. Although there’s nothing to do for 5 hours anyway? 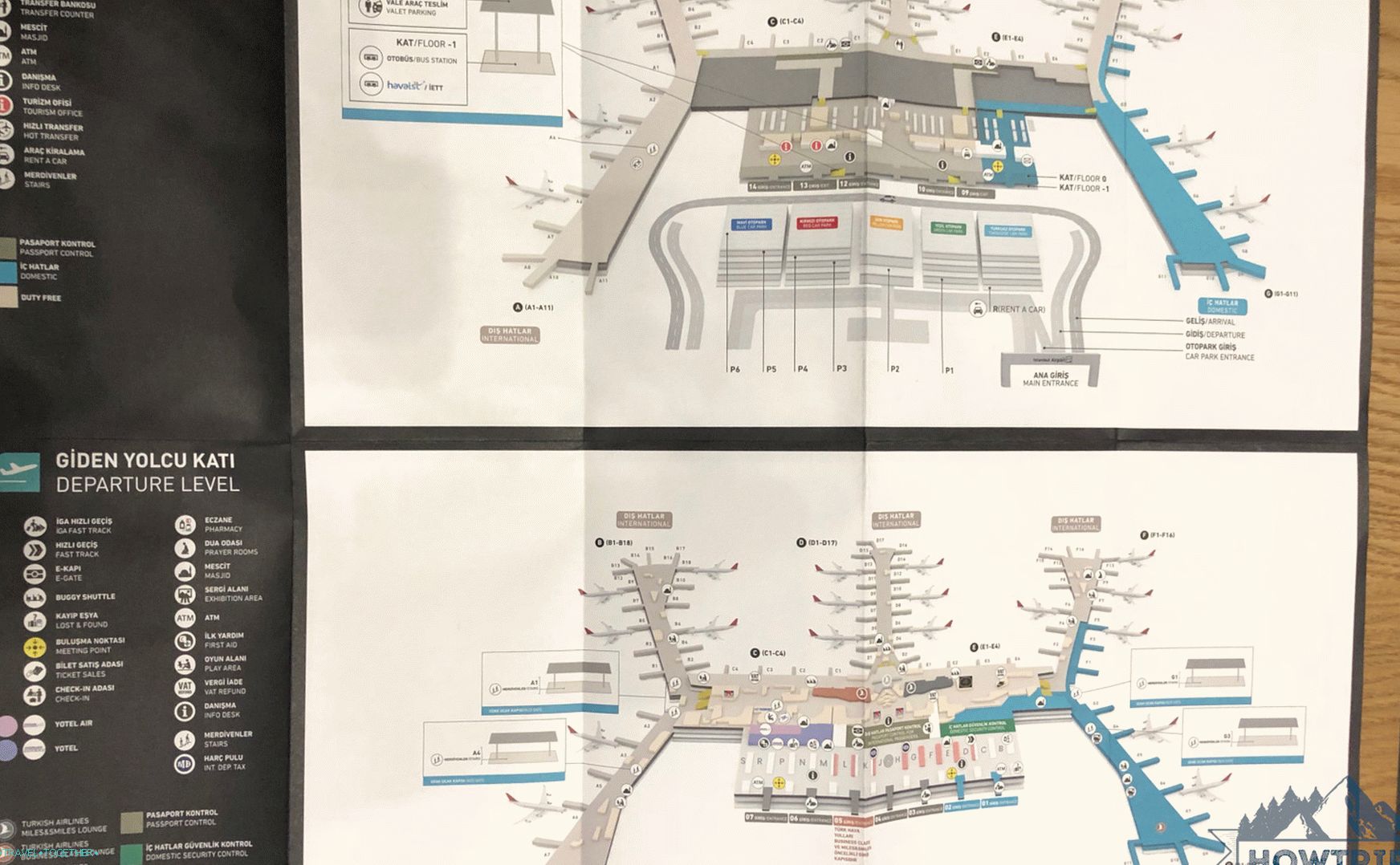 Total. Istanbul’s main airport is far from being an example for the rest, and spending long hours in it is not the rainbow part trips. To a large extent, this refers to the details.

We’ll write off on the same with Russian “and so it will come down, the main thing – it works, we will finish the rest “and we hope that in due course the New airport will be the best version of the good old Atatürk. Only mind you chaos and creepy queues!

Did you manage to visit the New Istanbul Airport? Share impressions in the comments!