Lemnos is a picturesque island in the Aegean Sea, which has not yet lost the charm of a secluded quiet place. Everything is here for demanding tourists – beautiful bays and beaches, unique attractions, restaurants and cafes. While walking through the mountainous neighborhoods of cities can see a multitude of goats, sheep and cats who love to pose for amazing tourists a photo. Lemnos is famous for its nutmeg wines, so evenings with a glass of intoxicating drink will be especially cozy.

The first eminent, if I may say so, resident of the island Lemnos was the god Hephaestus, whose mother is Hera as a child dropped from Olympus. The Cynthians, who then lived on the island, saved him, and in gratitude, he taught them blacksmithing. It is on Lemnos there was a smithy for Hephaestus, a fire always burned in its furnace.

If you refer to the myths of history, you can find out that the island It was inhabited in the Neolithic era. This is proved by the ruins of the city. Poliohni, founded in the 4th millennium BC. Around 1000 BC The two largest cities of Lemnos emerge, Hephaestia and Myrina (now the capital of the island). After it conquers the Persians, and then, in 500-499 BC, come the Greeks. For the next thousand years Lemnos alternately falls under the influence of the Spartans, Macedonians, Romans, when the Roman Empire began to expand, and in the 5th century AD the island becomes the breadbasket of Constantinople. Under the rule of Byzantium on place Hephaestus is built Kotzinas.

In the XV century, first the Order of St. Mary of Bethlehem, the residence which became Lemnos, and then the Venetians, under whose control hit the island after, fortified the island with fortresses to protect against pirates and turks. One of the fortresses was located in Mirin (Genoese fortress Castro), the second – near the town of Kotzinas. But still by the end of the century the Ottoman Empire established its island power.

The history of Lemnos has many common pages with history. Russian states, however, the pages are increasingly gloomy. AT 1770 year after the devastating victory of the Turks at Chesme squadron under the command of Count Alexei Orlov knocked out the Turks from Lemnos and freed its inhabitants. The Ottoman Empire took refuge in Castro fortress, but they could not hold out for a long time. Residents Lemnos welcomed the liberation from the yoke of the Turks. Unfortunately, defend the island with the remaining forces against a multitude of ships, strapped by the enemy to its shores, there was no possibility. The squadron was forced to leave Lemnos.

However, in 1807, the Russian fleet under the command of Admiral Dmitry Senyavin won the battle between the shores of Lemnos and the peninsula of Agios Oros, which went down in history as Athos. From now on the Turks had no power over the Aegean Sea.

In 1912, Lemnos finally became part of Greece. During World War I on the island were the troops of the Entente, it was they who were flooded to seek refuge after the revolution the White troops army. However, due to political turmoil tired and sick Cossacks and the officers with families and children were not given any help, for a long time they were not even allowed to go ashore. Losses were huge, and in memory of emigrants Lemnos remained “Russian Golgotha. ”

In 1941, the island is captured by the troops of Nazi Germany, however, the people who managed to carry their faith and inner freedom through centuries of enslavement, organized resistance. In 1944 German garrison fled the island, unable to resist the Greek to the soldiers. 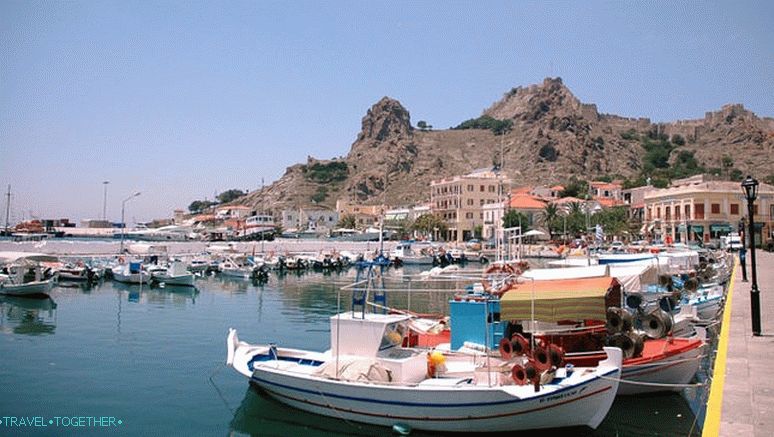 Myrina, the port and capital of the island, was named after his wife the first king of Lemnos. The city stretches from one side of the bay to of the other, and above it stands Castro’s fortress. On the streets of Mirina it is a pleasure to walk, it is interesting to visit the archeological museum, which is located on the embankment of the bay of Romeikos Yialos.

Poliochni is considered one of the most ancient cities in Europe. there is the opinion that Poliochni was Troy’s most serious trading rival, but the competition could not resist and around 2000 BC went into decline. Its ruins were discovered by Italian archaeologists. Now Poliohni has the status of the Cultural Park of Europe.

At the village Kotsinas is Mount Despotis. According to legend, it is under it is the forge of Hephaestus. Sanctuary deserves attention Kabir, ancient deities who had the power to deliver from troubles and hazards born on the island. These are the ruins of buildings from the 7th – 6th centuries to AD in the northeast of Lemnos. In the ruins that were once halls, were the mysteries of kabir.

Christian patron saint of Limnos is considered holy martyr Sozon. The saint has never been to Lemnos, but since the island famous for sheep farming, he, as the patron saint of shepherds and herdsmen, in Byzantine times he became the patron saint of Lemnos. Most The famous shrine of Lemnos – the holy icon of the saint Great Martyr and Victorious George in the church of the village of Kaliopi. She zamotochila in the second half of the XVIII century after the vision to local residents, as if a rider in a red raincoat had ridden around the village and with a spear, drove into the churchyard and disappeared.

Lemnos is closely connected with Russian history, and there are places on it, remembering Russian speech. For example, the area of ​​Myrina, wearing informal the name “Tsast” – this is nothing more than the changed “part”, so exactly how the squadron of Count Orlov stood here. In honor of him and Admiral Dmitry Senyavin in 2004 on the embankment was opened monument, because thanks to them the Greeks were able to throw off the Turkish yoke.

The city of Mudros became the retreat of the army in the harsh 1920s. Wrangel. It houses the Annunciation Church, in which the insistence of the Greeks was conducted for exiles from Russia service on Church Slavonic language. Since life was very difficult, and parts The Entente, then standing on the island, no longer resembled allies, and on wardens, religion and support of fellow believers helped the officers and Cossacks of the White Army to survive on the island. Seldom when our compatriots managed to come out in the nearest Greek villages, but when it was possible, grateful residents treated them from the heart. In the suburb of Mudros – Cossack, better known as Russian, cemetery restored in 2004.

From the same year 2004, the Russian Days annually take place on Lemnos. The Russian delegation comes to the island so that together with the Greek people and clergy to commemorate the deceased on the island Russian refugees, as well as the dead sailors of Count A. Orlov’s squadrons and Admiral D. Senyavin, who liberated the island from the Turks in 1770 and 1807 years