I lived in Israel for about 1.5 years and many times during this time talked about making a guide. But things are still there, I never decided, although traveled around the country, too many cons. One of which can spoil your whole trip and mood, plus lose money. I just have to warn you about it, it needs know.

Rules of entry to Israel

Entry to Israel for Russians – visa-free. This is captivating. Bought ticket and fly yourself rest in Eilat or the Dead Sea. Basically it is. But-

The only thing that you always need to have on hand is return ticket to leave Israel. He is not documents for entry into Israel, but without quietly refuse entry. I speak from personal experience, had such situation, flying with a man who did not have such a ticket. I had to talk to an immigration officer and buy ticket on the spot.

However, there are still some unspoken rules, or rather criteria, which must be met to be allowed into the country. And about them nowhere Nothing said, the verification service is a very closed system. You can simply take and deploy during the passage of the border control. Face will not like it, age, uncertain speech or else what

Actually, that’s why there are no lifehacks (list of rules), guaranteed to pass the border of Israel. May not let just from scratch. Equal, or to the migrant, or to to the terrorist, or who knows him to whom.

Then the border guard will send you to the immigration office, he there side by side. Who was at Ben Gurion Airport, he knows what’s left always a bunch of people. There you can spend a few hours in waiting for their turn. Then you can calmly expect deportation prison and deportation itself.

The ban on entry and deportation from Israel

Honestly, as long as it does not concern you, it seems that it happens somewhere far away, rarely, and for sure, people were themselves in this to blame. But here the incident occurred with my friend, from prosperous a family that has long wanted to visit Israel and was in absentia delighted with this country. Riding tour, tickets available, voucher to the hotel—

Instead of hospitality and relaxation, she was denied entry, nervous breakdown and lost money. Naturally, no one explained cause to end. The issued document simply says – “preventing illegal migration”. And why they decided so, not nobody knows. By the way, there were only 8 people who were deported, all from one plane. At first they suspected much more, but deported 8. Aha straight the plane of migrants flew. 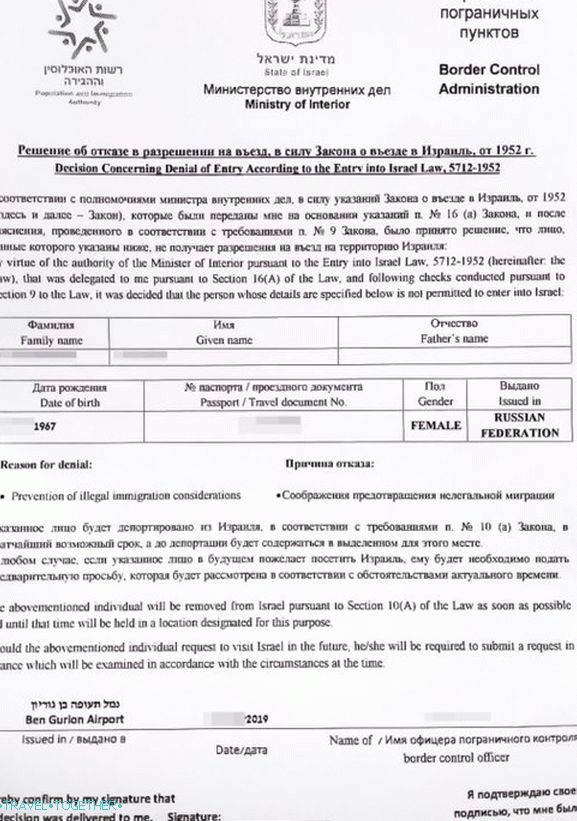 The ban on entry and deportation from Israel

The customs control specialist immediately blamed the move, that we came to work, said she did not believe that we were tourists. Arrived at 12 noon, waited 3 hours, then began to interrogate (namely interrogate, not talk). After another 2 hours we were put in car and drove in an unknown direction. No one nothing explained, treated us like criminals. We really became fearfully.

They brought them to the police station, took the things, phones and placed in a 9-person cell and locked with a key. In the chamber already there were people. The lights turned on, when they themselves considered it necessary, water gave at our request. In the evening they gave sandwiches. Late evening woke up and led to the doctor, the doctor measured the pressure and listened. So way, in complete ignorance, spent the night in this stuffy the camera.

The next day, at 11.00, we were taken to the airport by car from lattices. After numerous checks of ourselves, things led under escort for landing. We flew around around 14.00 hours. Our passports were returned only in our Zhukovsky border guards.

How do you like to spend 1-2 days with a close stuffy chamber, without toilet, water and food? An exception is not made even for children, but treat you will be like the last shit. Immediately I remember an autistic child who could not be in a confined space screamed, banged his head against the wall of the prison cell, parents prayed make an exception, but the Israelites didn’t give a shit.

If you google, then such cases are not rare, including when and from Israel is not released just like that (case 1, case 2, case 3). AND it seems they are getting bigger. Recently Grigory Leps was not allowed yeah, of course, he really wanted to stay in Israel. With Ukraine an international scandal is brewing since Ukraine began to deport Israel in response (correctly, I think it’s a pity Russia does not do this). Or there is a case when at the entrance to Israel the mother and child were separated, she was deported, and the child was allowed to father of a citizen of israel. Thus, this family, in principle, cannot live in Israel now.

Do you know what’s strange? That because of these delusional checks, it is not clear what is based, prosperous tourists suffer, which nafig illegal did not give up. While on the streets Israel is full of representatives of different nations living illegally homeless in abandoned buildings, cardboard boxes and so on. It’s humiliating when you are put on a level with them and announced the criminal No, well, the truth is, the Israelis really think that they have is it smeared with honey and everyone dreams to move to Israel? Funny to her to god

By the way, the deportation is given for 5-10 years. And if you got it, then I would in your place I did not go into Israel anymore without prior visiting the consulate of Israel and getting a visa. Yes country visa-free, but it is better to secure a visa as a guarantee to less risk was. Although a visa (tourist or working) is also not a guarantee, with a visa, too, wrapped.

Pro security service airport Ben Gurion in Israel heard many. Inspection satisfied in full, except that in the ass do not climb. Although – Maybe I was just lucky. Passing all procedures before boarding the plane can take quietly 2 hours. Consider this, come in advance, or you will be late for the flight.

Moreover, you will not only be inspected in Ben Gurion (with departing), but also in another country when boarding a plane flying to Israel. Especially, this is the fault of the airline El Al, they have some manic inspection, so basically I avoid them flying.

Usually, they first conduct an interview before the reception. registration for the flight. Already at this stage will have to stand in line. Then when you go through the frame, you can gut all carry-on baggage and check every thing in it is so special magnetic sticks. If this was not done, they can This is already in the gate and there is another interview.

Despite the fact that I am a citizen of Israel and have their passport, I also apparently constantly suspected of something. How did I hesitate answer their questions and spend at the airport for 2 hours on inspections. The worst airport for me is Ben Gurion. I asked the security service what you keep me inspect, but the question remained unanswered.

P.S. Everyone has their own attitude to this problem. If anything, I am you warned. And yes, the post is not for the patriots of Israel. I know they will a lot of excuses for these actions, but for me it is a humiliation.

ISRAEL
Israel is a country for me too ambiguous, because too many mixed impressions and

ISRAEL
Pros have already written, and now let’s go through the minuses. Their not less.

ISRAEL
This hotel brought me quite by accident, but I’m always happy once again potestit

ISRAEL
No, until I decided to make a guide to Israel, but occasionally I still

ISRAEL
I perfectly understand that all the pros and cons are subjective. therefore here is

ISRAEL
Long time did not write to the blog, more than a month has passed
Leave a Reply Cancel reply
Recent Posts
Categories
Recent Comments
Archives
This site uses cookies to store data. By continuing to use the site, you consent to work with these files.