Nom Rethymnon (Rethymni) – one of the four areas of Crete (Greece), in the west it borders with the name of Chania, in the east – with Heraklion, the capital is the city of Rethymnon. 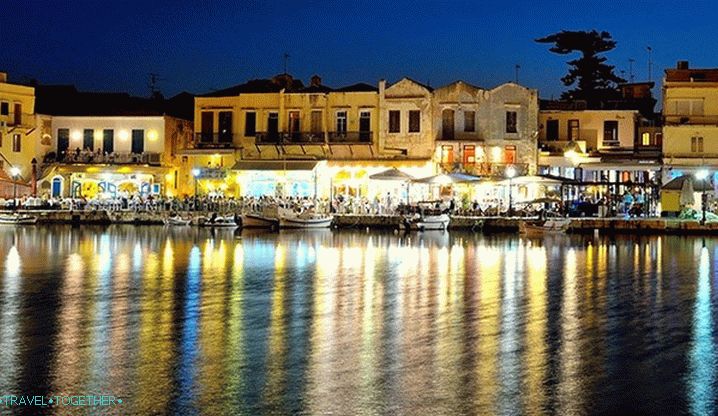 Северное побережье нома омывается Критским морем, южное –Libyan. The area is rich in historical and archaeological monuments, as well as amazing corners of the protected nature – there are lakes, mountain rivers and Mediterranean pine forests, and impressive cliffs and ravines. On the territory of the mountain range Psiloritis, or Ida, is the highest point of Crete – 2456 m (top of Timios Stavros). Crete is considered one of the most beautiful and interesting Greek islands and, having been in Rethymnon, This can be seen from your own experience.

The coast in the north of Rethymnon is a strip of sand. 15 km long, on which there are many beaches. Many of them, thanks to the cleanliness and well-being of the territory, marked international quality mark “Blue Flag”. 25 km from the capital Rethymnon is the monastery of Arkadi. His main church is built in XVI century., But there is evidence that the monastery existed here even with since the early Middle Ages. Arkady became one of the symbols of the struggle Greeks for independence from Ottoman rule after being in In 1866, its walls stormed 15 thousand Turkish soldiers. Monastery rebuilt many times and is considered one of the most beautiful samples Venetian Renaissance architecture in Rethymno. 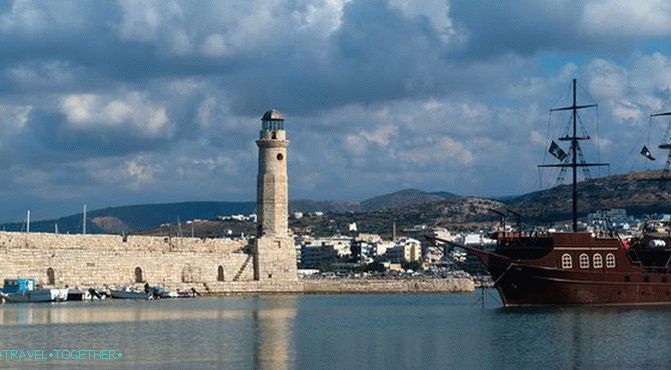 In the southern part of the nome, near the village of Plakias, there is still one Orthodox monastery – Preveli. He served as a haven for rebels during the liberation war and suffered greatly during World War II. There is a museum on its territory and everything still live a few monks. Preveli Church is located miraculous gilded cross.

A surprisingly picturesque place in the south of the nome is the Kourtaliotiko gorge. Descent into the gorge is a dizzying serpentine staircase with viewing platforms. At the bottom of Kourtaliotiko is Church of St. Nicholas and the waterfalls flowing into the river Megalo Potamos through the rock formation. Around – giant boulders, high slopes gorges, greenery and flowers. River continuing its movement along the gorge south, flows into the sea in the Preveli beach area, so in this place You can swim in the salty Libyan Sea, and in fresh river water. The famous palm tree grows along the shores of Megalo Potamos. grove, which is the hallmark of the river. Unfortunately, the grove suffered very much during the fire of 2010, but there are hopes for its recovery soon.

Cave lovers should definitely visit Sfendoni and the Idea cave, where, according to myths, grew the supreme Olympic god zeus The beauty of the plateau surrounding the cave breathtaking and makes you bow before the majestic by the forces of nature, who created such a miracle. The capital of the nome, the city of Rethymnon, was inhabited in antiquity, but real flourishing occurred here during the reign of the Byzantines. The city was an important strategic point in trade between the West, southern part of the Mediterranean and the states of the East. And money, the proceeds from trade and mediation were partly spent on the construction of beautiful architectural structures that are the decoration of Rethymnon to the present day. In the old town still narrow streets with Venetian houses, mosques and fountains – turbulent pages appeared in Rethymnon his stories. Tourists should definitely visit the Venetian fortress Fortezza – from its height offers a wonderful view of the snow-covered mountain range Ida, the endless sea and city.

Rethymno known as one of the main intellectual centers Crete, a vacation spot for creative people, where every summer held a festival of art. There is a historical ethnographic, marine, archaeological museums and museums contemporary art. Large selection of hotels of different classes makes Rest in Rethymno is convenient for young people and for families with children.