As Porto Katsiki for Lefkada – the card of the island, so The most beautiful and most famous beach in Greece is Navagio Bay (Shipwreck) for Zakynthos. 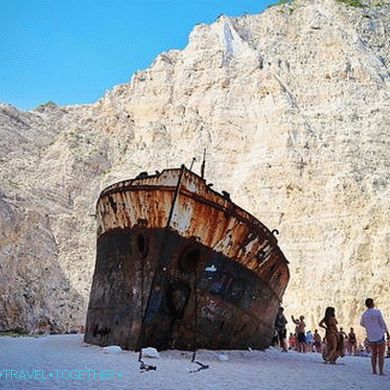 Хоть это самое кораблекрушение было катастрофой для капитанаship and his family, it was a blessing for the island of Zakynthos and the whole Greece

For many years, tourists erroneously walked legend that a ship called Panayotis smuggled cigarettes, alcohol and women, hiding from the police, ran aground. However, the truth is completely different, and more recently about her told the captain of the vessel, who stood at the helm on the night of the accident.

September 6, 1980 cargo ship Panayotis set off from the port of Argostoli (Kefalonia) to the port of Durres (Albania) .When the batch was unloaded at the port of arrival and the ship departed for Kefalonia. However, due to very bad weather conditions and mechanical destruction on the night of October 2, 1980, the ship passed Kefalonia and ran aground on Agios beach Georgios. After the disaster, this beach was named the beach “Shipwreck”.

Since the beach was not accessible from land, the captain and the police did not were able to protect the ship from robbers. In consequence of which, during the next few days the ship was almost completely looted. However, thanks to the fast and efficient police action thieves from surrounding villages, a total of 29 man, quickly found, arrested, and all things stolen returned.

Captain of the ship Charalambos Compotexras due to the possible environmental pollution ordered to find a way to remove the remains of a ship from the beach of Agios Georgios. but the ship was in so bad condition due to the fact that one part of it was blown up by unknown persons, and therefore further Recycling of the wreck turned out to be impossible.

Fortunately, after all these detective events made the beach Navagio (which in Greek means “shipwreck!) Is one of The most beautiful and most famous beaches of Greece and beyond outside as well as the symbol of the island of Zakynthos.

Today, the remains of the ship are written with numerous tourists from all countries of the world, vacationers in this wonderful place.

Today is a beach with incredible beauty and an incredible history. shipwreck, which occurred almost 40 years ago, is facing with a serious problem, since soil erosion gives results, which can lead to the disappearance of the most recognizable beach in all over greece

Noting the fact that the bay of Navagio has a tourist attractiveness of world importance island municipalities teamed up with a local technical institute to create programs for the preservation and restoration of the core ship. Work in this direction has already begun.

It is also planned to take some protective measures already in the near future. So, for example, the territory will be fenced, which will not allow tourists to get to the ship. By design, these fencing should be small so as not to disturb the aesthetic attraction for those who want to take pictures next to by ship.