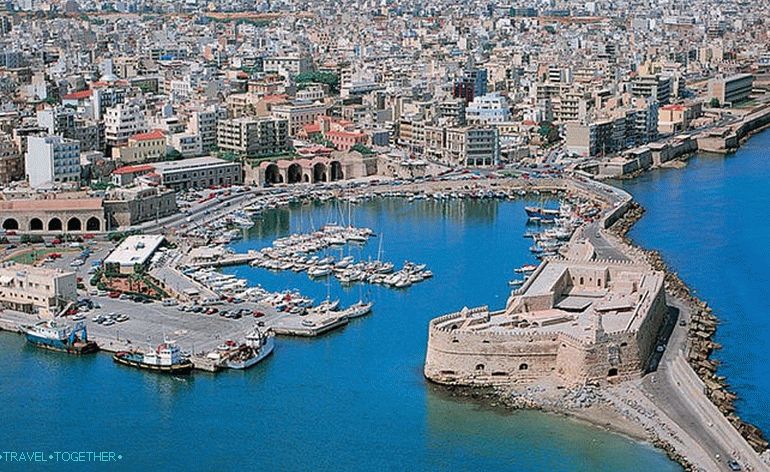 Средневековая крепость Кулес является визитнойcard city port of Heraklion. In the Middle Ages this defensive castle was known as Castello, Rocca a Mare and Castello a Mare, which means “castle in the sea.” Present the name comes from the Turkish soo kulesi (“sea fortress”) and It was given to the castle during the rule of the Ottoman Empire.

The castle was built in the years 1523-1540. It was based on a rock. small size, and for the convenience of the site had to be increased. For this they used mounds of stones and boulders from the islands of Thrasquion and Dia, as well as ships submerged and filled with stones, which became the basis for the breakwater from the north and west of the cliff.

The shape of the fortress is rectangular, semicircular in the north-east. One of the walls is 6.96 m thick and the other three are at ground level. reach 8.70 m. The inner space of the fortress is divided partitions with a thickness of 1.5 to 3 m. There are open areas in the roof for lighting and ventilation.

You can get to the territory of Kules through the entrance to the western to the side. In ancient times it was carefully guarded: three wooden doors locked quickly in case of danger, thus blocking access of enemies to internal rooms. Defensive cannons in the castle housed on the ground floor and around the perimeter walls of the open area roofs (two entrances lead to it from the main corridor).

During the Kulesu tours, you can see the preserved water tank, prison, bakery and even a mill. Nowadays fortress functions are no longer defensive, but rather decorative: Koules is the most recognizable landmark of Heraklion, and the best view of the fortress opens at the entrance to the city port.