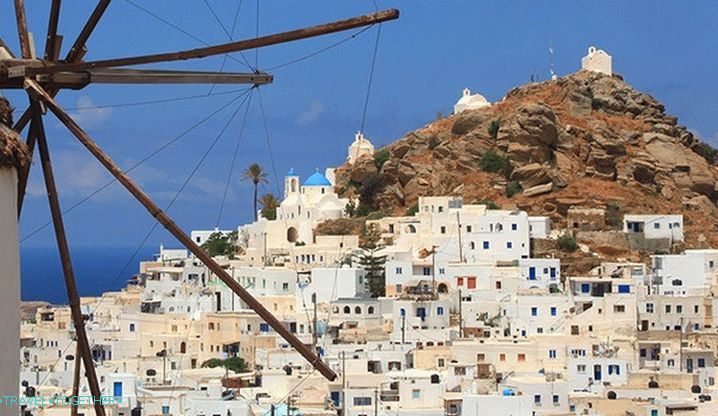 Иос – живописный греческий остров в южной частиAegean Sea. The unique nature, original culture, monuments of antiquity and the Middle Ages. Ios who locals call Nyo, is one of the 200 islands Cyclades archipelago. Ios’s length from north to south is 18 kilometers, width from east to west – 10 kilometers. In real The moment here is home to just over 1800 people. The ancient Greek historian Herodotus wrote that on the island of Ios was buried the author of “Odyssey” and “Iliad” poet Homer.

Ancient buildings of the Hellenistic era, preserved on Ios Island, most of which are now in ruins. However, what remains of them, allows you to imagine the former greatness local architecture. Of interest is the tower and the ancient plumbing in the town of Agia Theodoti, the ruins of the temple in Psafi and another one tower in plakoto. In Paleokastro preserved the ruins of the Venetian fortress.

Ios has a convenient harbor, from which ferries and high-speed catamarans depart the sea. To mainland Greece by ferry can be reached in seven hours, the cost of the trip is about 30 euros. Speed ​​catamaran mooring to port Piraeus for 5.5 hours, but it will cost more expensive – 50 euros. Nearer just to Ios are Naxos, Santorini and Folegandros, while the journey by ferry is only an hour and a half. On the island itself in summer shuttle buses run, you can also rent a car, motorcycle or scooter. The cost of this service starts from 30 euros per day.

Ios is called the Cycladic Party Resort the archipelago during the high tourist season in the island’s capital city Choir can meet young people from all over the world. Nightlife has become to develop here in the 70s of the last century, when the island Chose hippies. Since then, lovers of discos, entertainment and constant holiday come here from all over the world. Most Popular Ios Nightclubs: Scorpion, Dream Nightclub, Rehab, Kandi and Finari. Food prices are also attractive. alcohol which is substantially lower than other greek islands.

Not far from Chora is Myopota bay amazing beauty and gorgeous white sand beach. Great beaches located near the villages of Manganari, Kalamasa, Plakes, Dzamariya, Kolitsani, Agia-Theodori and Psafi. On most of them all are created. Conditions for practicing water sports: diving, snorkeling, water skiing.