In Hong Kong, I stayed only 5 days, but during that time he managed sink into the soul. I still remember this trip and I understand that would gladly repeat it. And actually it’s amazing because that I don’t really like megacities and crowds, but Hong Kong is This plan is something special. In this post I want to post a map subway in hong kong and explain a bit that the subway is of itself presents.

The metro is called MTR and is denoted by the Russian letter Ж on the red background, once you see and then no longer confused. Cost and travel time can be viewed here on this interactive map – http://www.mtr.com.hk/en/customer/main/index.html 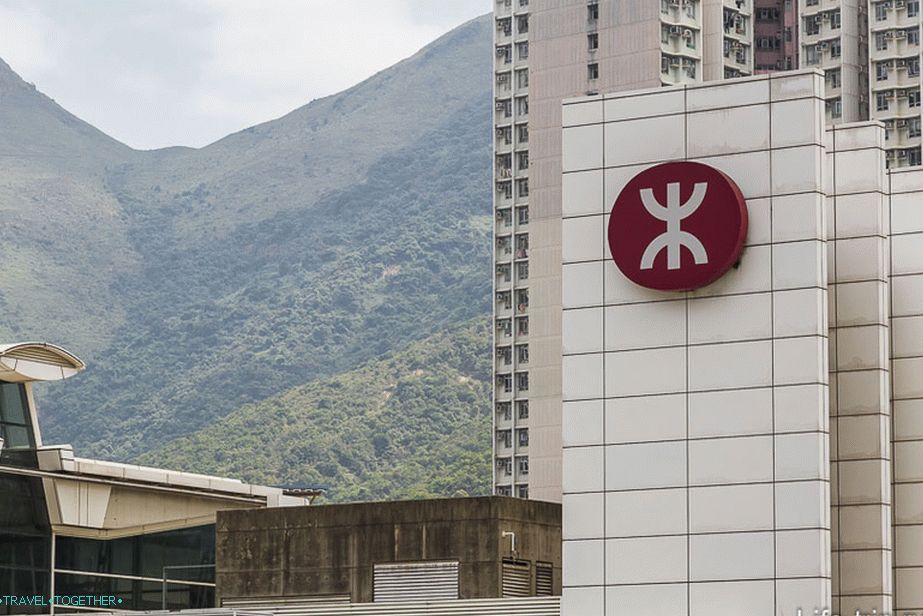 This is what Hong Kong subway designates.

The operating time of the Hong Kong subway varies depending on the station, but on average from 6am to 1am. More details can be found at the official site by selecting the desired station (pdf will be downloaded from the desired info).

The easiest way to pay for trips on the metro is with the Octopus card. (Octopus), you can immediately buy it at the airport at the express checkout till cities. I used it constantly, very convenient, and do not need to think about the fare. This card is useful:

Initially you take it with a balance: 150 HKD (adult), 70 HKD (retired from 65 years), 50 HKD (child), and then replenish the balance as needed (in any metro station or 7/11). Everytime, when you apply it to the turnstile for passage, you will see the rest. Of this amount you have 50 dollars is a deposit which can be returned, like the rest of the card itself, with departure from the country (at any subway box office). Hold only 9 HKD per using the card if you leave earlier than in 3 months after buying a card Octopus.

Here you can also read about Octopus cards – http://www.octopus.com.hk Get a free dollar on your Octopus card

You probably read that the Hong Kong subway is very confusing. It’s true! But, the thing is, to be attentive and not hurry, then getting lost there will be difficult. For example, transitions between the branches are always accompanied by pointers, you just need be guided by the color of the branch and the name of the end station, by which will understand the direction of movement. Everywhere at every station Before exiting there is a detailed scheme of outputs (there are usually many happens) which needs to be studied and found the necessary. 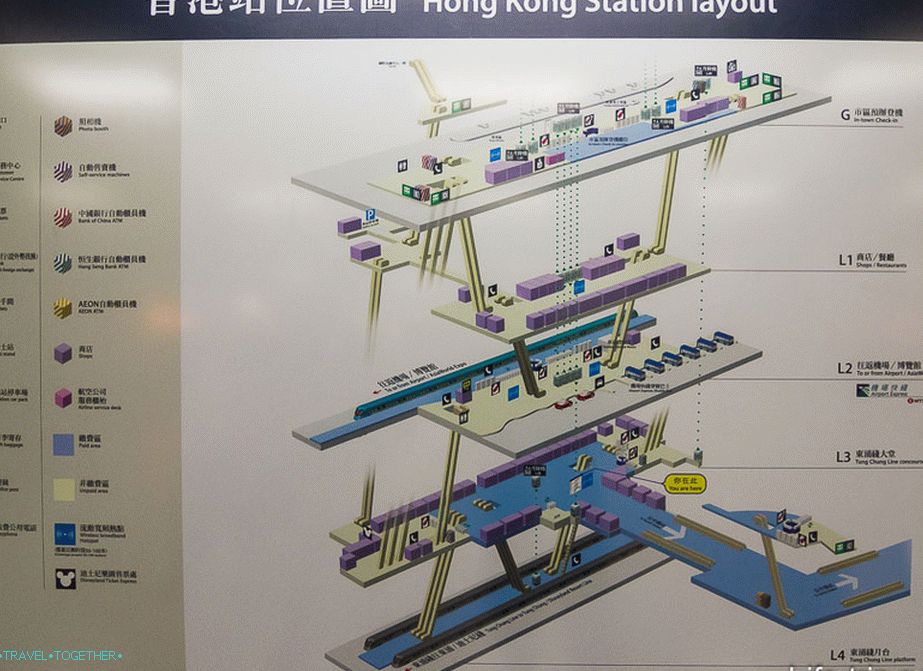 The scheme of transition from one station to another is not always so difficult. everything Do not be surprised if leaving the subway you find yourself in the shopping center, this is normal. I was at first very unusual and uncomfortable, because I was not going to make purchases at all. I remember we wandered around the mall for half an hour and tried to find there marine terminal and ferry terminal in Macau. Yes, yes, they too built into a large shopping center. 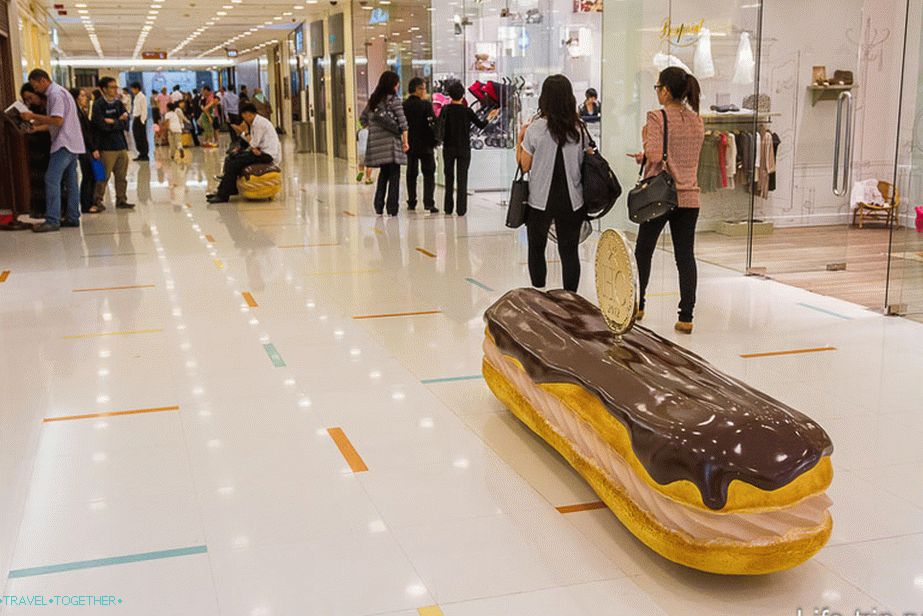 Here we have to wander along similar shopping centers in search of a way out.

Despite the complexity and complexity of the subway in Hong Kong, it can be reached very far, almost throughout the country, which is very convenient. If you look at the Google map, you will see as it connects several islands, and on the mainland stretches in all sides. You can, of course, ride buses, but I I prefer the subway. 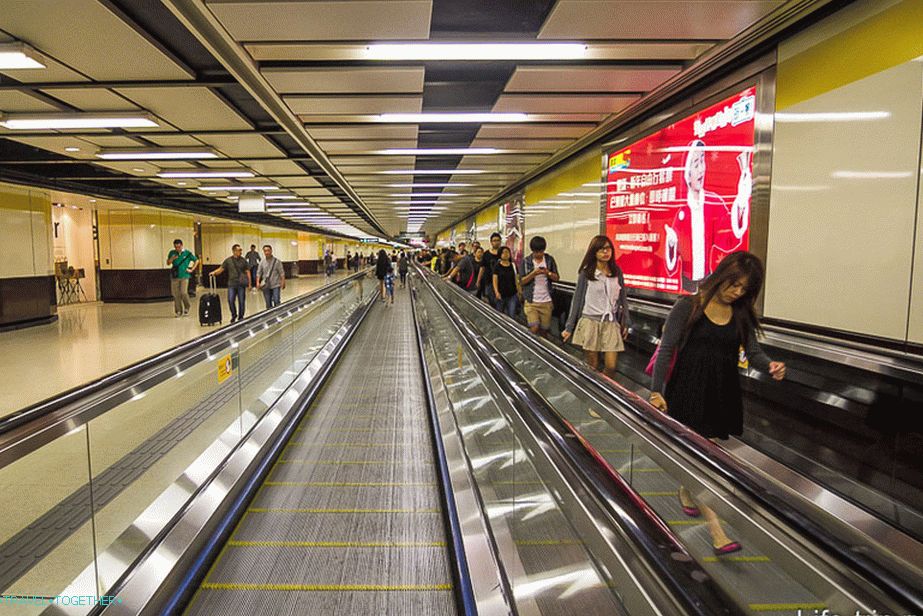 Travelators in all long tunnels The apron is separated from the train by transparent glass with doors. Some metro stations in Hong Kong have free intrenet This is the simplest way to transfer a book to the library.

HONG KONG
As probably many have already understood, a trip to Asia this year It will

HONG KONG
I continue to write about Hong Kong and about my impressions, of which It

HONG KONG
Hong Kong is an expensive city, so most tourists are looking for here. affordable

HONG KONG
I planned to get to this park as far back as a previous trip,

HONG KONG
Since the 1960s, Hong Kong has experienced strong economic recovery that turned him from

HONG KONG
After the previous post about China, I decided to make another similar post, but
Leave a Reply Cancel reply
Recent Posts
Categories
Recent Comments
Archives
This site uses cookies to store data. By continuing to use the site, you consent to work with these files.