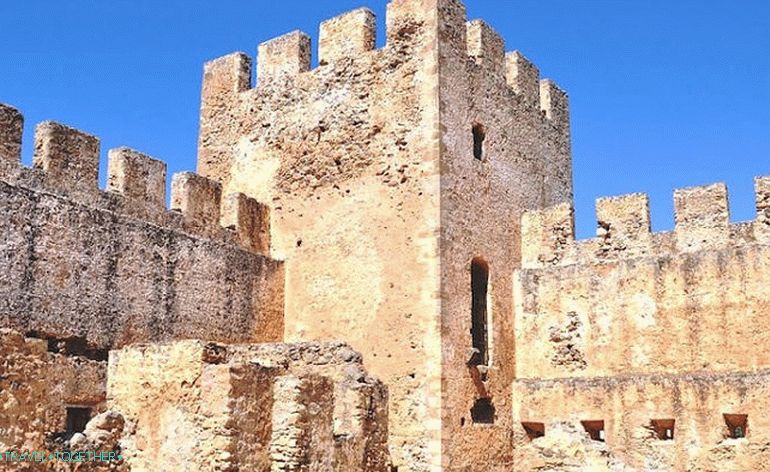 Критский замок Франгокастелло, расположенный наSouth of the Prefecture of Chania – one of the most famous attractions region. It was founded by the Venetians back in 1371, was intended to counter pirate raids and control by locals. The construction was completed in 1374, at the same time the fortification was named after the church of St. Nikita, which was located nearby. However, the original name did not stick – the locals called the castle Frangokastello (Franco Castello, i.e. castle of francs, foreigners), so it is known to us to this day.

Time has shown that the fortress was built here for a reason: this convenient strategic point more than once became the scene for historical battles. So, in 1770, the Turks were based here in while fighting the rebels, led by John Vlachos.

After the first unsuccessful uprising, the next attempt to get rid of from Turkish domination was undertaken by the Cretans 60 years later. In 1828, the Greek leader Hadzimihalis Dalianis with 600 of his supporters seized Frangokastello. Battle with exceeding forces of opponents (about 8 thousand Turks) lasted a week and ended with a bloody massacre of the Cretans. Dalianis and 338 him supporters were killed in the castle, the rest were forced capitulate

After these events, the Turkish Pasha ordered to blow up the fortress, so that the rebels did not use it again, but during the revolution 1866-1869 Frangokastello was restored and again became strategic fortification to control the territory of Crete.

After the island finally passed to the Greeks, the castle turned out to be unnecessary and was gradually abandoned. But locals they claim that past events here still remind of themselves. Guides love to scare tourists with horrific ghost stories. Drosoulites: they say that the souls of the dead are inhabited in the castle Greek warriors defenders. In late May or early June from the first human shadows rise over Frangokastello by morning dew which disappear into the sea at sunrise.

This phenomenon was tried to give a scientific explanation: mysterious shadows arise due to the refraction of sunlight through dew drops (therefore they are seen only in the morning). It is worth noting that the shadows do not occur every year – sometimes it can pass enough a long period of time before again above the castle at the end of spring mysterious “perfume” will appear.

However, during the tour you can not only tickle your nerves, but with my own eyes inspect the architectural features buildings: Frangokastello consists of 4 square towers, connected by walls with serrated loopholes. The largest tower – south-west: it offers the best overview, in addition, it has the best protection potential, including for the main gate fortress and is also the last place of defense in the event of capture.

The main entrance to the castle was located on the south side, it is still pores are decorated with noble coats of arms and the main symbol of the Venetian Republic – the winged lion of St. Mark. There is another small arched east entrance and the remains of the inner buildings – barracks, stables, warehouses, kitchens, etc.