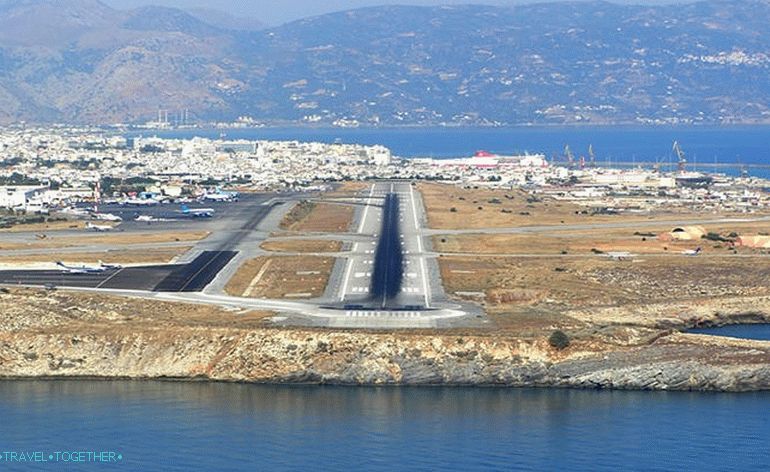 Question: How many airports in Crete? Answer: Crete has three airports.

Most of the airport takes Heraklion, followed by – Chania airport, and domestic flights land at the air port Sitia.

Crete’s main airport is named after the famous Greek writer Nikos Kazantzakis, who gave the world such works as “Greek Zorba”, “Last Temptations of Christ”, “Report to El Greco” other. In the summer airport “Nikos Kazantzakis” – one of the busiest in Greece. It is located 5 km from the capital Crete and leads its history since 1937. Today the airport takes direct flights from Armenia, Russia, Serbia, Israel, all EU countries and many regions of Greece, including Kavalu, Rhodes, Thessaloniki, Mykonos and Athens. “Nikos Kazadzakis” – the second largest Greek airport after the Athenian. Despite the simple device, it has all infrastructure for the comfort of passengers. In the terminal there is ATMs, cafes, luggage rooms, information desks, big duty Free, where at the last moment you can buy the best Greek goods and perfumes famous brands.

The airport has a convenient bus service to Heraklion. Behind few minutes you can reach the city center on route number 78. WITH another stop departing flights to Elounda and Hersonissos. Getting to Chania or Rethymnon will have already from Heraklion.

Another international airport of Crete operates in Chania (15 km from city) and bears the name of the local hero Ioannis Daskalogiannis. Despite his status, he is no different huge scale – the entire infrastructure is very compactly. For passengers, there is a medical aid station, racks. information, bars, souvenir shop, restaurant, there is a small duty Free. Air harbor is constantly being improved: expanding terminal and the opening of the second terminal is planned.

The airport connects the city of Chania with Poland, Italy, Sweden, Cyprus, Germany, Israel. You can also get here from Thessaloniki and Athens. Bus service allows you to quickly get to Chania – the route follows several districts of the city, so tourists can get off at any stop. The ultimate – bus station. If desired right at Chania airport you can rent a car for further convenient travel around the island.

The air harbor of Sitia cannot yet be compared to passenger traffic with any other Crete airport. But on her have high hopes – in time they want to turn the main airport of the island. It is convenient to fly to Sitia for those who moves inside greece. The airport is connected with Athens, Rhodes, Karpathos, Preveza. For passengers, it opened in 1984 year, and in 2014 began to take charter flights from several European countries. In January 2016, Sitia Airport moved into the building. The new terminal and the confidence that in the near future The geography of flights will expand significantly.

Crete’s youngest and smallest airport has amenities: parking, taxi services, ATM, help, bar, cafe, restroom. Sitia Air Harbor is connected by bus communication with the city center (only 1 km). For holidaymakers in Crete Siteia airport can replace long-distance travel. You can fly here from Chania or Heraklion to explore East Crete and its attractions.

Airports of Crete on the map

Hospitable Crete is loved by tourists of different ages and with different preferences. And regardless of the purpose of the rest you can be sure of one thing: any of the island’s airports from the first minutes provide a comfortable stay in Crete.