A special atmosphere reigns in the capital of Bavaria, Munich really does not look like the rest of Germany. Romantic castles in the foothills of the Alps, exquisite late style architecture Gothic, Tyrolean songs and lively talk over a mug excellent Bavarian beer – all this makes Munich unique and charming, very pleasant and interesting in terms of tourism place. In the autumn there is a world-famous festival. Beer – Oktoberfest; but you can feel his spirit all year round, the old Hofbräuhaus beer restaurant, where the best beers and noisy fun never ends. Munich is famous as historical architecture: squares, cathedrals and palaces, and modern: BMW Museum, Allianz Arena, Olympic Park and the tower.

For those who want to save time preparing for the trip and to dive more fully into the atmosphere and history of the city, I would Recommended to use the services of a private guide. In my opinion individual tours are much more interesting than organized ones excursions with their large number of people and a hackneyed program. Especially with a private guide, you can always agree on what is convenient for you. time and day.

Take a look at the selected author’s excursions below. something like it. I liked the “Munich Express Tour” and “Munich through the eyes of the inhabitant.” The first is well suited to those who have just a couple of hours, for example, in transit in Munich.

What to see in Munich

Frauenkirche Cathedral, or the Cathedral of the Blessed Virgin Mary – the building of the 15th century, pavilion type, created in the late Gothic style. Located in the center of Munich between the Odeonsplatz and Marienplatz. Frauenkirche is the highest cathedral Munich and refers to the Catholic Archdiocese of Munich and Freising. The 22 columns of the Cathedral create the illusion of a small spaces, however, it is so huge that it could accommodate yourself up to 20,000 people (and the population of Munich during the construction Frauenkirche was only 13,000 people). The cathedral has a height of 99 meters, and it is the tallest building in the city.

This is the central square of Munich and one of its most famous attractions. Here are two Munich Town Halls, New and Old. This is where Kaufingerstrasse begins. Here too The historical market of Viktualienmarkt is located. Under the area – junction station of the Munich metro, connected to a branch of the city electric trains. Also on the square are built the Marienzoyle column and the fountain. Fischbrunnen. Marienplatz – is immersion in the atmosphere of the medieval Germany.

The BMW Museum is dedicated to more than a century of concern history, in it the exposition of propellers of airplanes, engines, motorcycles and cars. In the complex of buildings of modern architecture In addition to the museum, the main headquarters of BMW and a modern BMW Welt Center. The BMW Museum building is shaped like a bowl when viewed from above, on the roof visible company logo. Headquarters building 22 floors high resembles four-cylinder outlines engine and listed as an architectural monument of Munich. The BMW Museum building was opened for the 1972 Olympics, and in 2008 opened a new pavilion. In addition to old cars, the museum has interactive part with installations and modern conceptual models that you can sit in. In addition to the museum exhibition, pre-recording is also available excursion to the production. Read more about the BMW Museum. 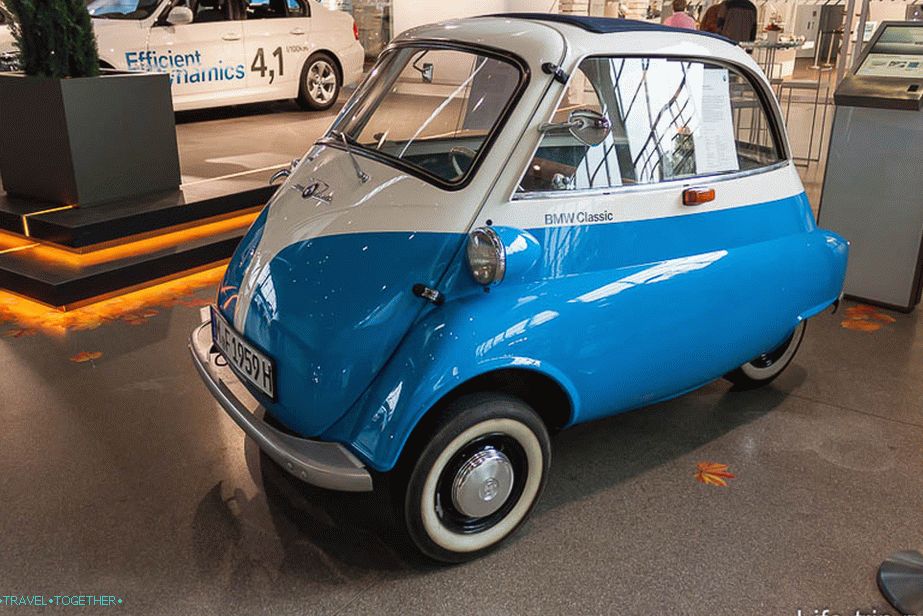 The square was founded by King Bavaria Maximilian I in 1828. on the site of the destroyed city walls of the Swabing Gate. AT the construction of the square was attended by the famous architect Leo von Klenze. Here in 1862 a monument was erected to Ludwig The first is a huge equestrian statue. At Odeonsplatz is located immediately several sights of Munich: Theatinerkirche – church, created in the late Baroque style, commanders arcade, chic Leuchtenberg Palace and the Odeon Concert Hall.

National or Royal Theater is a cultural symbol. Bavaria and Munich since 1818. Built by the architect Carl Von Fisher in the style of a classical Greek temple. He is The main stage of performances for the Bavarian Opera and Ballet. Theater located on Max Joseph Square. The facade of the building is decorated with a colonnade, and inside – a huge number of elegant sculptures. Royal Theater famous for the fact that here they first presented their creations such world famous composers like Strauss and Wagner.

Entrance fee: tickets for submissions cost from a few Euro.

Hofbräuhaus or “Court Brewery” – one of the most famous tourist attractions munich. This vintage beer The restaurant with three large rooms with a garden is located in the historic center, next to the main square of the city – Marienplatz. Story the court brewery of the Bavarian dukes began in 1607, and in 1828 the restaurant was open for free visits. Hofbräuhaus visited by many famous people, from Mozart to Lenin. In the restaurant can accommodate up to 4 thousand people at a time. In the main hall on the first floor an orchestra plays, visitors are seated for long wooden tables with benches, and beer spread in huge liter mugs. Here you can taste traditional Bavarian dishes, for example, the famous knuckle with cabbage and pretzels – salty Bavarian beer pretzels. And, of course, this is the place where can and should try many varieties of excellent bavarian beer, not only familiar to us, but more exotic, for example – beer with lemonade.

Munich became famous throughout the world thanks to its picturesque galleries – Old and New Pinakothek, as well as Pinakothek Modernity. In the Old Pinakothek are works art until the mid 18th century. Opposite her is New Pinacoteca with the works of XIX – early XX centuries. In the third – Pinacoteca modern art – are paintings of modern artists. New Pinakothek has a collection of more than 3000 paintings and 300 sculptures. The Pinacoteca of Modernity includes four museums, completely different from each other: Exposition of modern Art, New Exposition, Architectural Museum and State Munich graphic collection.

Entrance fee: from 4 euros per adult.

Königsplatz – square on the street Briennerstrasse. She was created in 1830 in the form of the ancient forum. It was planned that she will become area of culture in the so-called “New Athens”. In the north Glyptotek is located with a collection of ancient Roman and ancient Greek art. In the western part – the “gate of the square” – the similarity of the entrance to Acropolis. The building of the State Antique Assembly – on the south to the side. And at the end of the square you can see the abbey of St. Boniface. AT the eastern part of the square are the administrative buildings of the NSDAP and Fuhrerbau, preserved from 1936 to the present. In times The Third Reich on this square held rallies and marches. Now in the summer there are concerts and cultural events under open sky.

German Museum of Science and Technology

This is the largest museum of engineering and natural history of Munich. It contains more than 28,000 exhibits from more than 50 industries. science. Founded in 1903 as a result of a collection of German engineers, for a long time it was called “the museum of masterpieces of natural science and technology “. Here you can see artificial lightning, an airstrip for an aircraft, a mining shaft and much more. In the Museum Planetarium, using projection onto The 15-meter dome can survive a realistic journey through The solar system within the observable universe. Under the building The museum has a tunnel almost a kilometer long – and this too exhibition hall: here you can plunge into the world of useful mining fossil. Located on the island of Museumsinsel, on the river Isar.

The creation of the Munich Olympic Park was timed to the summer The 1972 Olympic Games. What can be seen in the Olympic the park? First of all – the Olympic zone, the stadium, the arena with the tower, playgrounds for all kinds of sports, the Olympic Village and, actually, a park zone. The height of the Olympic tower is impressive its size: 290 meters. The observation deck is located on an altitude of 190 meters; You can go there by high-speed elevator. WITH the height of the Alps, with visibility reaches 40 kilometers There is also a magnificent restaurant with 150 seats. The Olympic Park and the tower are the favorite places of rest for the citizens and tourists. Read more about the Olympic Tower.

Entrance fee: To the Olympic tower for adults 7 Euro, per Olympic stadium for adults – 3 euros. Children under 6 years old – is free. 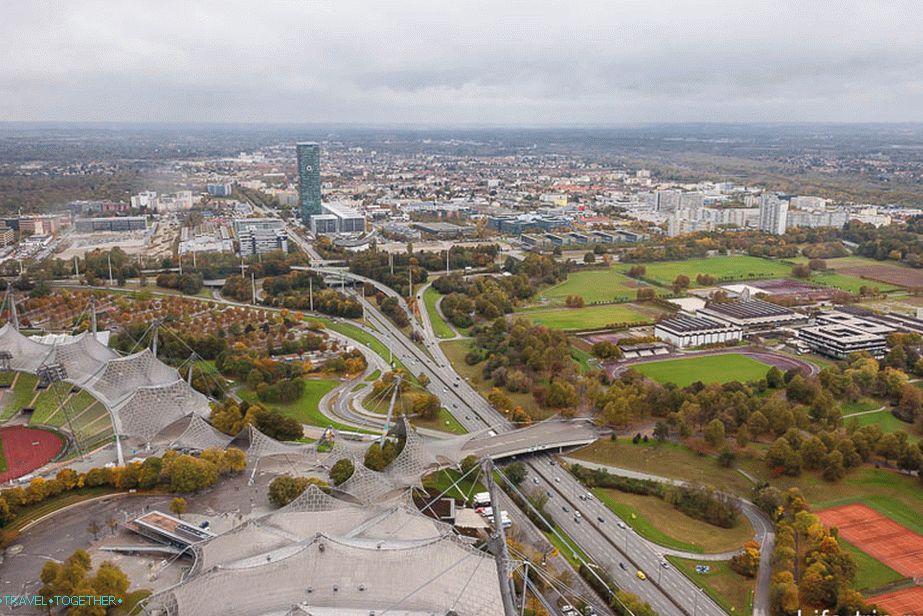 View from the Olympic Tower

Thirty-eight meter column installed at the end of the street Princesstraße Strasse. Monument dedicated to the 25th anniversary of Versailles world signed in 1871 The column is decorated with a Corinthian capital, and on the top is the statue of the goddess of victory Nike. On the lookout two wonderful views open up to visitors at the site: on the one hand, the city at their feet, on the other, the statue in the glow of gold. On summer evenings, this place gives tourists and residents romantic impressions: fountains at the base of the monument illuminated by night atmospheric lighting.

It is one of the largest castles in Europe and the largest building. Germany. Located in the western part of Munich, in the area Neuhausen-Nymphenburg. It was built in 1675, in the Baroque style. The interiors of the castle are quite diverse. Great Hall in Nymphenburg decorated in rococo style, decorated with frescoes. In the Gallery of beauties hosted 36 of the most beautiful women of Europe. General each the hall of the palace is a masterpiece of architecture: everything says that Once the palace was the residence of the royal dynasty. Palace a park with an area of more than 200 hectares attracts tourists with lakes, water cascades and palaces-pavilions. In the park – many swans. On the territory of Nymphenburg also built the Royal Stable chic baths, hunting lodge, pool, bath, chapel “Magdalenklause” and many other buildings, interesting for visits

Entrance fee: from 8.5 euros per adult.

GERMANY
The city of Berlin was the last point on our way home. AND He
Leave a Reply Cancel reply
Recent Posts
Categories
Recent Comments
Archives
This site uses cookies to store data. By continuing to use the site, you consent to work with these files.