It will be about the laws and traditions of this country and the rules tourist behavior in it. By the way, this is a lot of time. pay all the guides during the tours, apparently were precedents. Indeed, it’s better not to get into trouble you can get on a huge fine, and even in prison to thunder.

I have a separate general post with my review of the tour. There i told how was the whole tour.

Probably the most important thing to know when buying a tour is the fact that the UAE is an Islamic country with strict laws. Since i I think that the laws and traditions of any country where we are should be respected. come tourists, then this point I stand in the first place.

96% of the population of the UAE are Muslim. According to the laws of religion, a Muslim must pray five times a day. During the review Abu Dhabi tours we witnessed such a prayer. Our the driver performed prayers during long stops. the main thing here, to show respect for the faith of the inhabitants of the UAE and understanding, do not interfere and, of course, do not take pictures. 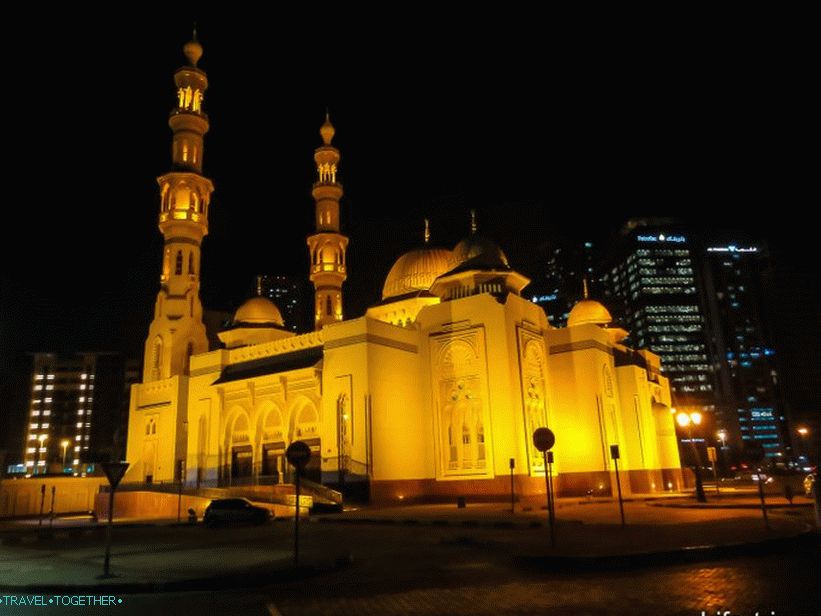 I already wrote in the article about the Emirates that the UAE is a federative state consisting of seven emirates. And in every emirate absolute monarchy, i.e. ruled its own dynasty of the sheikhs. Local population respects the president of the country, members government. In all public places you can see them. portraits and flag of the country.

Dubai residents simply adore their young crown prince (36 years old), handsome, educated and not yet married. Portraits Sheikh Hamdan ibn-Mohammed Al-Maktoum can be seen everywhere in Dubai Even walking through the malls of the Arab market Souk Madinat Jumeirah during a tour of Dubai, we met his portraits. On question: “Can I take a picture?”, the shopkeeper, smiling and sociable, allowed. Conclusion: if it is polite, with a smile, it is always go forward. Naturally, laugh out loud, discuss the merits portrait or point your finger to none of us in the head it’s come. 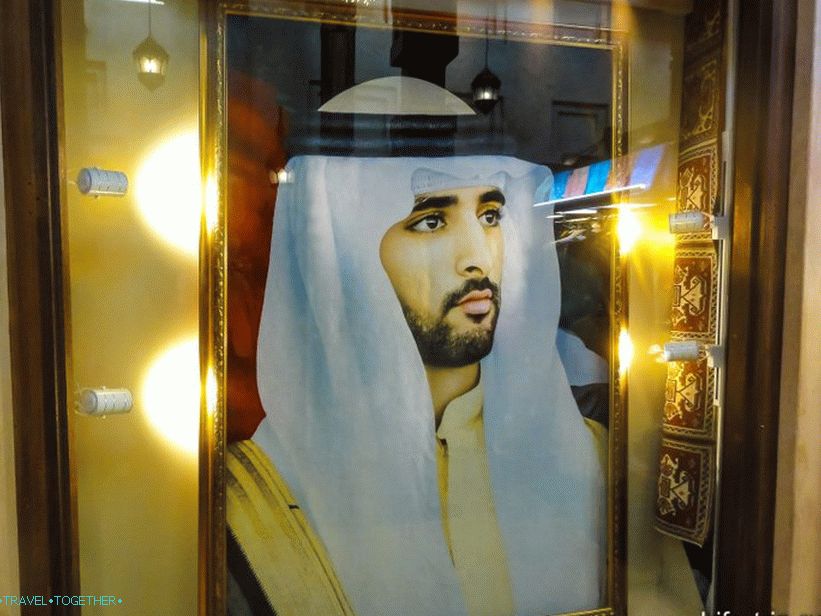 Portrait of the Crown Prince of Dubai

Strict laws in the UAE

In short, the laws of the country = Sharia law, i.e. population lives by the rules recorded in the Qur’an. Strict laws prohibit drink alcohol, smoke, gambling (casino, gaming machines), there is pork, publicly show signs of attention, cross the street in the wrong place, litter – Strict laws for us tourists, and for the local population they are completely natural.

Of course, alcohol can be bought in Duty Free. In Abu Dhabi and Dubai there is already an indulgence for tourists, and alcohol is sold in some bars and restaurants. And no one will come to the hotel room with a check. AT distant emirates began to turn a blind eye to the sale of alcohol drinks. In Sharjah so far with this very strictly. At least, where we had dinner, offered only water, juices, tea and coffee.

I repeat, but our guides spent a lot of time UAE laws. Apparently, so that we, unknowingly, do not spoil ourselves rest, and they did not create problems.

The result of this policy is a completely safe country for residents and guests of the country. We are convinced of this, walking the female by evening sharjah company. Dinner in the evening in the restaurant met from the whole male staff only smiles and VERY polite appeal

We walk in the evening Sharjah. Unusually deserted, but спокойно

Fines in the UAE

Penalties for violations are huge. For example, for crossing the road in the wrong place – from $ 100. Moreover, a policeman in uniform you may not see. But the person standing next to you in civilian clothes, show you a police officer. To argue with the policeman, to be rude to him is fraught with additional fine.

Fine for food, drinks in public places, and also chewing gum – from $ 27

The fine for drinking in a public place alcohol – from $ 500 to imprisonment.

But the penalty for drugs is a fine of thousands. dollars and imprisonment.

Those who wish to rent a car, you must familiarize yourself with the local by the laws. Penalties for violations “draconian” and more than a hundred species. For example, using a mobile phone while driving – $ 217.

All this information is obtained from our guides. We have had the sense not to test it in practice.

There may also be fines for violating the rules of importation of drugs for the territory of the UAE. Our tour operator, with whom we flew to the Emirates, provided information on this subject on his website. Restrictions There is on narcotic and psychotropic drugs. The list is long in English, you need to read it carefully. With the usual I had no problems with the first-aid kit Dubai airport.

How to dress in the UAE

Of course, a person is free to choose his clothes. But, if you want to meet benevolent smiles or at least neutral attitude to yourself, it is better to adhere to the laws of this country. If a want to shock the local population with T-shirts, shorts, then get ready for judgmental looks, resentment on faces passersby

On the territory of your hotel and the beach, as a rule, no restrictions. Well, leaving the city still have to stick some rules. Shoulders, chest, knees – quite enough to feel comfortable amid the local population. These rules apply to both women and men.

Women in the UAE usually wear abaya over secular clothing. This is a spacious long dress, usually black. On the head black sheila shawl, rarely niqab, leaving only open eyes. And it is quite rare to see a woman in a burka, i.e. in mask on the face. Visiting places like the Sheikh Zayed Mosque may only in abaya or similar clothes.

Men are most often dressed in jalabia, a long white shirt. Peculiarities of the Arabs’ national dress are caused not only religion, but also the climatic conditions of the emirates. Desert sand the heat, it all affected the style of clothes. Therefore closed spacious clothes made of cotton fabrics, covered head will save us from thermal and sunstroke.

Под абайей может быть вот такая красота. true this dress is worth more than the price of our tour.

Arab woman in burka. Picture taken in the museum.

But in general, a tourist – he is also a tourist in the UAE!

And one more prohibition. Do not frankly consider women in national clothes, try to photograph them, touch and to ask questions.

And finally, if Dubai and Abu Dhabi are more loyal to tourists, then in strict Sharjah is not worth experiencing fate.

UAE
The climate of the United Arab Emirates is influenced by their geographical position. Emirates

UAE
When planning a vacation in the UAE, tourists often stop their selection on emirate

UAE
Buying a tour in the UAE, I chose the hotel according to the following

UAE
So, I flew to the UAE on the tour (according to the link my

UAE
Most recently, I visited an amazing country, United United Arab Emirates. Tour I bought
Leave a Reply Cancel reply
Recent Posts
Categories
Recent Comments
Archives
This site uses cookies to store data. By continuing to use the site, you consent to work with these files.