I wanted to go somewhere for the New Year holidays 2010, yes so that the budget. Therefore, we decided together with my wife to go to Estonia to relatives, and more precisely to Tallinn from Moscow by car. Since even a reserved seat on a train went somewhere 2 times more expensive than gasoline. Yes and the car is somehow more romantic. And we had only 4 days for everything about everything.

Visas to Estonia were fairly easily obtained without applying to travel agencies. We visited the website of the Estonian Embassy, read what documents are needed, everything is written in detail there, filled out the questionnaire in electronically (they only accept those now), and then had to file documents and pick up. Everything is pretty fast, without much queues, you only need to register by phone. As a result, only 35 Euro per person. By the way, who will go to relatives or friends, now you do not need to make an invitation, just specify the contacts visited person.

A honey insurance is not bought next to the embassy, but in advance for 1200 rub (my post about all the nuances of insurance). It is important to choose it so to be working, and not to buy the first available somewhere of the way.

Green card cost 2450 rubles (my post about all the nuances green cards). The most convenient way to order online and bring home.

Information for those who are going to go from Moscow to Estonia – there and about visas, and about the road, and about all sorts of other moments. And about obtaining a Schengen French visa myself, I wrote here How to get a Schengen visa.

Where to stay in Tallinn

In any case, picked up apartments in the capital, you never know what. Since we stayed with relatives, they were not useful to us. this time. However, sharing with you:

Reviews are good, well located, in general can be recommended and book.

Having read the forums, and frightened by the queues in Narva, we decided drive through Kunichina Gora (on the Estonian side of Koidula), is located near the town of Pechora, and for some reason does not appear on the maps in the Internet.

This was our first such long-distance autotravel. Little worried: will the road be cleared of snow, how will it behave car, as there go abroad, as a queue at the border in New Year’s holidays. Worried in vain.

We left at 8 am on the new Riga route: Moscow-Pustoshka-Island-Palkino-Izborsk-Pechora. Cards with not They took, but there was a navigator with Navitel for Russia, and IGO 8 for Estonia. Map detailing is good, did not let down, in Tallinn laid route at no problem.

A good road ends with the Moscow region. Tver region is solid potholes, and it is better to pass it before dark The roads are cleared so-so, that the cars rolled, that and going. We were pleased with the names of some localities, one of the remembered “Davydov end”.

At the border there were hours at 16, were the first, were enough quickly. If you had filled out the declaration in advance, it would be even faster happened. The border guards did not particularly check us, although we have with us and things really were not. Keep in mind meat and dairy products can not be imported. There is a booth in front of Kunich Mountain; pay 150r. For travel on the toll road, 100 meters long. It is possible therefore at this border crossing there are fewer queues, so Most of the queues are created by cunning Estonians coming to Russia for vodka and gasoline, and ride around the whole day. Basically This Folktsvageny with large tanks. Also in this booth you can buy the green card, for the same price as in Moscow, specifically recognized (not more expensive as they say on the forums). Perhaps this concerns only Point Kunichina mountain. Another moment before the border is necessary Be sure to fill a full tank, as gasoline in Estonia costs 16.5 CZK per liter (about 1 euro).

Next began Estonia. It was decided not to exceed, and honestly speaking, did not want to. All go quietly, according to the rules, do not prune, literally a couple of times I was overtaken. Speed Limit: on track maximum 90km / h, in populated areas 50km / h. Stand on the road cameras that show you in real time speed. Roads like, cleared, with good asphalt even not on highways. There are light-reflecting posts on the sides, darkness is very convenient to drive. 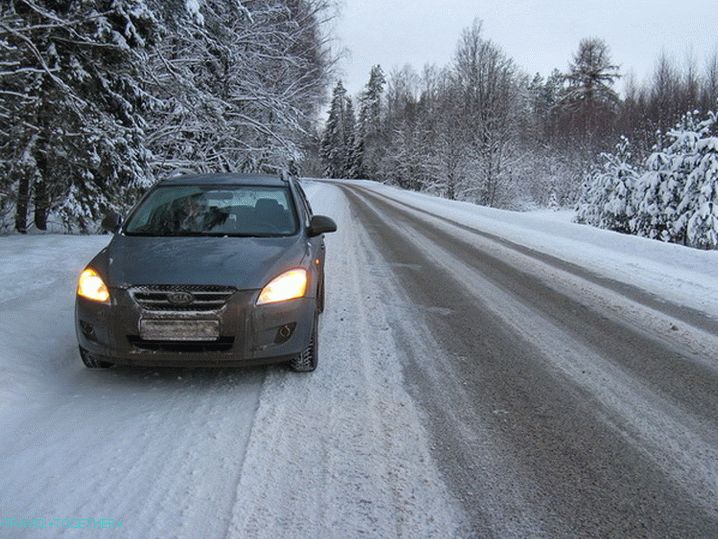 Another difference is that the villages are well-groomed on the way, no such ruin. We arrived in Tallinn at 22 o’clock (at 21 local). Total road took 14 hours along with the border. Mileage Russia 770 km, 280 km across Estonia.

For the next two days we walked around Tallinn. The first thing that rushed into eyes, a large number of shopping centers, more than in Moscow on per capita. And in our Butovo there is still no sensible center. By the way, the equipment there seems more expensive to us, clothes and food about the same.

Itself visited the old city. Very reminiscent of Europe, its cobbled narrow streets and old buildings. But the course euro to the crown, there is a predatory. Therefore, it is best to change money. in Swedenbank, there are a lot of them in the city. Estonian currency – CZK at least for now, and the exchange rate in the bank is 1 euro = 15.6 kroner. We visited the observation platforms of the old city. Sorry went snow, so only the nearest snow-covered roofs were visible. Summer, it looks more impressive, a combination of red roofs and green trees around. They went to the American Pizza, quite a cheap and tasty, and There is a choice of vegetarian pizzas, which was important for us.

Before our arrival there were snowfalls and the whole city was overwhelmed. with snow. It is cleaned, of course, but somehow not willingly. Apparently so much snow is nonsense, winter is the same! Many cars are littered with snow on the roof. 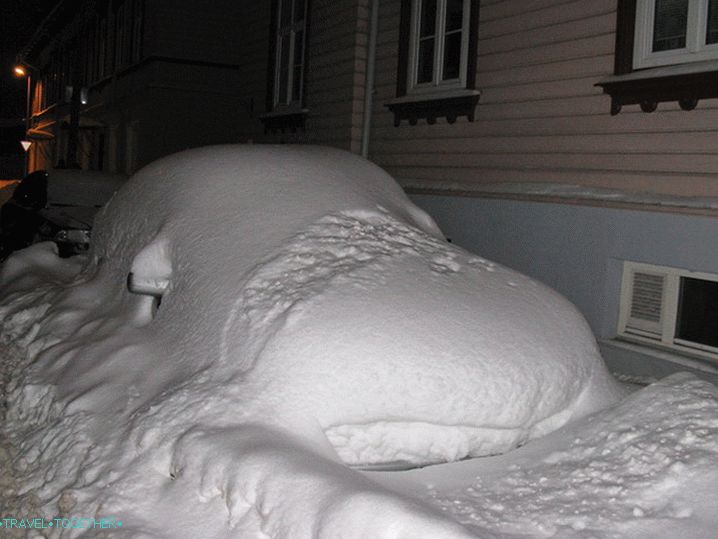 Tallinn. Under the snow.

We visited Kadriorg, an analogue of Peterhof, quite such nice buildings. The private sector is almost in the city center too reminds Europe, lovely cottages and small streets. Walked along the embankment, which is opposite the singing field (there music plays, and in the summer the people perform). On the waterfront there are a lot of gulls and ducks, but we unfortunately did not take a loaf with us in order to feed these and so plump creatures. We visited the port, looked at the ships painted like Ikea. Unfortunately, we could not get on the ferry Tallinn – Helsinki, days was not enough. Tallinn. Not far from the port.

We went to Keila-Joa to the waterfall. There come in the summer the newlyweds, and the groom must carry the bride in his arms through fast flowing river. In winter, of course, everything is a bit sub-frozen, but also beautiful. Between the frozen waterfall and the stone wall there is space, and there you can go. After drove to the mountain of Hamlet, there is a lookout on the sea. 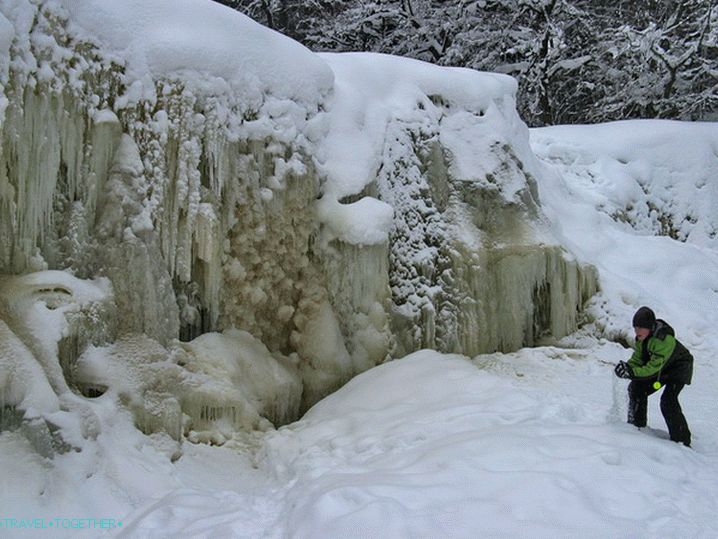 There are a lot of Russians in Estonia. As we were told about thirty%. Only once did the store have to speak English. AT Mostly only the younger generation speak Estonian and don’t know Russian language. Russian discrimination has a place to be, and to work more difficult to arrange, and in life in something more difficult. But to tourists it no relationship. Relatives said that a few years ago there were almost no beatings of Russians, and the press about it was silent.

Back did not want to leave. In Estonia we liked the whole it is something intermediate between western Europe and Russia. Originated even the thought of moving there live is easier than moving for example, to France or to England, but at the same time the opportunity to drive around Schengen and live in a more or less civilized country. True enough and cons …

The way back took the same time, drove along the same route. My wife and I discussed the whole way, that in Estonia, like in Europe, and what not. However, it is completely agreed that the roads and people items in Russia make a truly depressing impression after Estonia (Moscow region does not count), and Moscow Tallinn’s trip to the car was worth it

A year later, driving independently across Europe by car (Czech Republic, Germany, France), I still remained unconvinced – Estonia cool country, no worse than their neighbors in the Schengen.

P.S. If you see on the border near the toll road barrier slowly waiting cars with Estonian numbers, then know that they waiting for you. In order after you have paid your fare, you have time to slip by, until barrier raised.

ESTONIA
About the trip Moscow Moscow by car, I already wrote in the past time.

MAGAZINE
Delft (Netherlands) – the most detailed information about the city with photos. Delft’s main

Thai laws
Moving to permanent residence in Thailand, I want to take my favorite things with

TURKEY
Want to go back from spring to summer? Then you are the road to

Shopping in Thailand
Shop Home Pro in Thailand – a place where you can buy it all
Leave a Reply Cancel reply
Recent Posts
Categories
Recent Comments
Archives
This site uses cookies to store data. By continuing to use the site, you consent to work with these files.