Abkhazia one day … Is it worth it or not? So we thought, sitting in a campsite on the beach near the village Lazarevskoe. One-day excursion cost quite decently compared with independent visits, and we are used to somehow drive yourself. But there was little time, and it was decided to go! Very much I wanted to look at the beauty of Abkhazia, and compare what is now with their childhood memories of the 80s.

Report on a trip with an excursion to Abkhazia one day: Pitsunda, Lake Riza, New Athos

The tour included a visit to Pitsunda, Lake Riza, New Athos (New Athos Caves and New Athos Monastery). I honestly speaking, not a lover of temples, museums and other things. Therefore, me, before all, interested in the views from the bus and Pitsunda, I wanted to see what changed. His wife was interested in everything, she was never in this mountain republic. Of course, to absorb the atmosphere of the place, you need go there is not in the tour bus, and not one day. But it is already next time.

We left at 5 am from Lazarevskiy, several to the border of Abkhazia hours, close by. The way there we were brightened by the stories told our local tour guide from Sochi. The passage of the border took about an hour. Organized tours pass quickly. But Independent travelers do not delay. Border with Abkhazia rather arbitrary. Immediately after the border point we sat down local tour guide and broadcast almost all the way, and enough interesting, although now in my head almost nothing is left this information. I remember that the prices were called rooms in recent built boarding houses, and I did not like them. Private sector in Abkhazia, I think, will be much more budget. 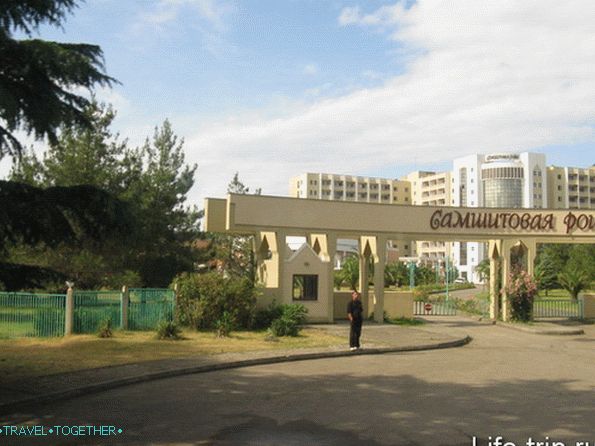 The views from the bus are fascinating. Sea and rusty on one side railroad with dilapidated stations on the other hand beautiful mountains covered with forests. Everywhere there are abandoned houses without glasses. In a country of devastation— 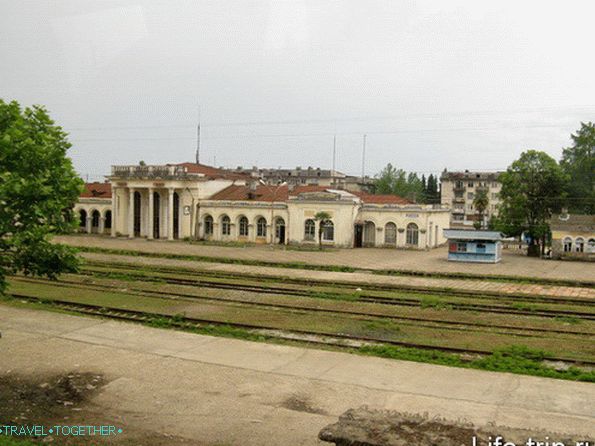 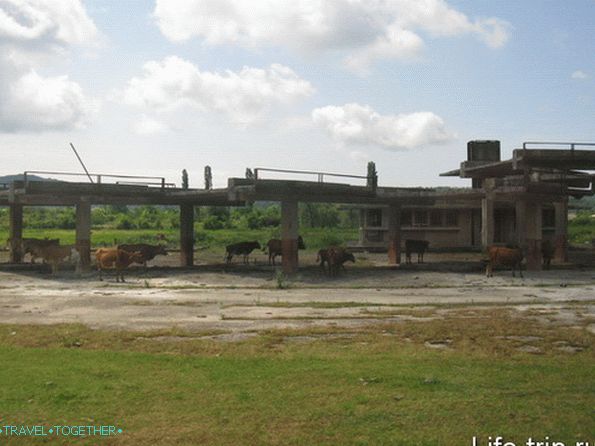 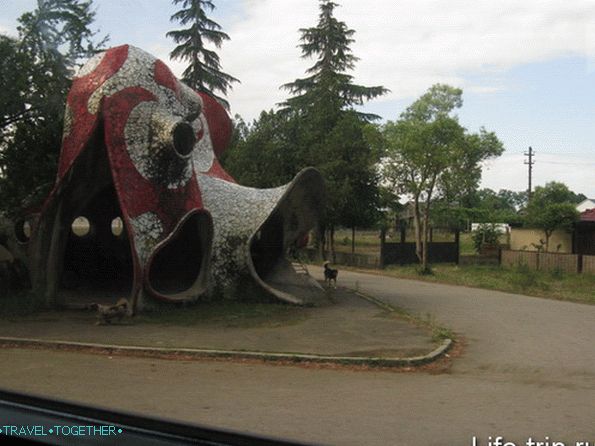 It’s a shame, such a picturesque country, and this is happening in it. Flashed outside the window of Gagra, also all in desolation. Building shabby, thank God, that the arboretum in Gagra is preserved, but nature takes its toll, trees destroy asphalt, vines braid building. Another photo of Abkhazia.

We arrive in Pitsunda – the same picture: cracked tile on the embankment, overgrown with grass, sea shore, littered with branches, cast ashore. 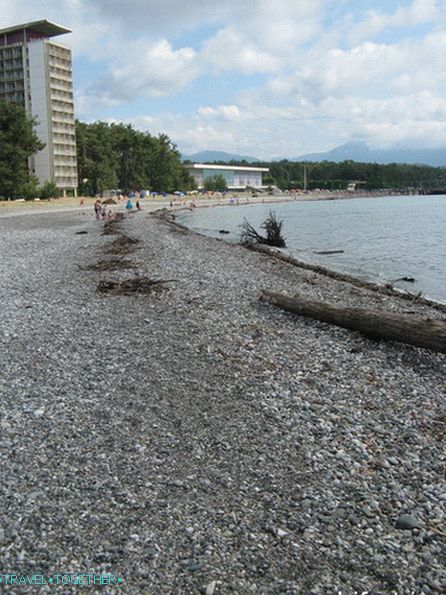 The buildings of the boarding house have apparently not been repaired for a long time, part of The buildings are generally closed. You look at it and you think like short-lived creations of human hands. Awesome picture, a couple more tens of years, and there will be a jungle. 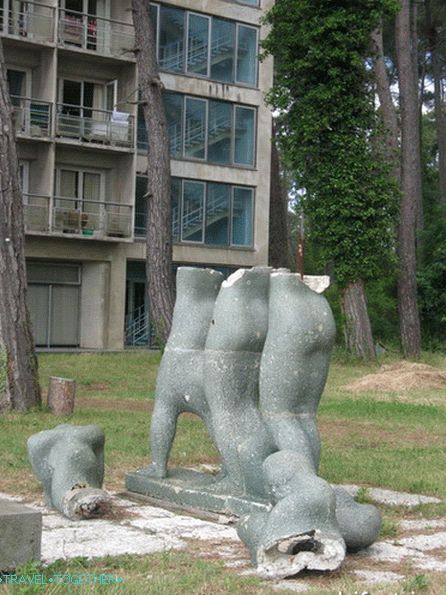 There are few holidaymakers, but this is also good after overcrowded metropolis, the most it! In Sochi and nearby towns from crowds of people just can not relax, for example, on the beach there you can sunbathe already just standing. And why do so many people go for black seals the sea, it’s better to go sunbathing in Turkey. Give us rest on the black sea savages! In general, it makes sense to go to Abkhazia for a quiet, quiet rest, with family and children. Hang out here especially nowhere, probably because of this we liked it even more. After all, instead of a cafe, you can see a large number of natural beauties and for small money. 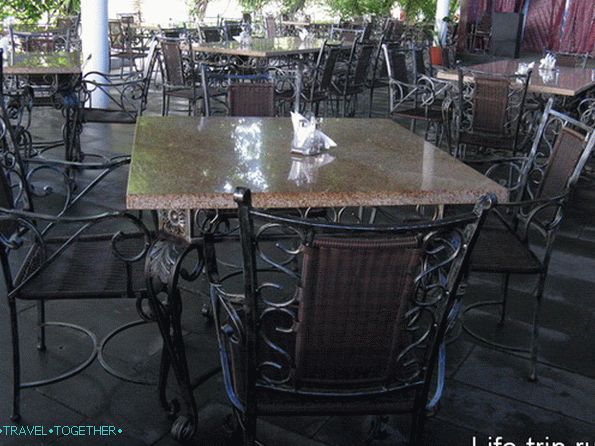 There are few local residents in Abkhazia, they live poorly, and therefore in tourist season are trying to earn as much money as possible there is practically no work there. But prices in Abkhazia do not care significantly lower than on the Russian coast, and the private sector, and local food, and guided tours. And their attitude to visitors is very good

The next item is Lake Riza. Unfortunately, the guide took to Pitsunda is just an hour to catch the rest. Road to the lake lay among the mountains, in a beautiful gorge, along the river Bzyb. 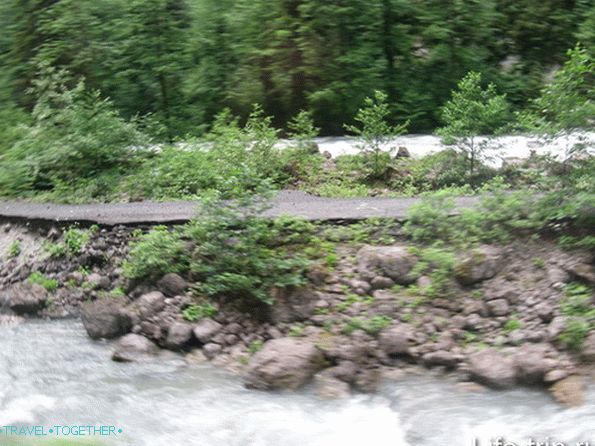 Abkhazia. The remains of the road washed by the river. 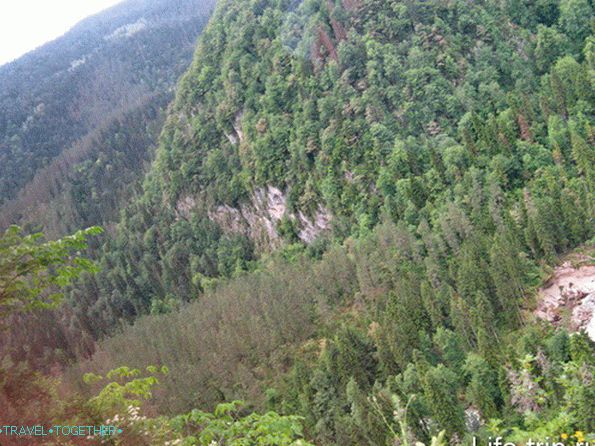 Abkhazia. Cliff on the way to the lake Ritsa.

On the way, you can buy Abkhazian honey and achmu … Delicious things. how we understood each guide has an agreement with certain points of sale of food and cafes, so the bus stops only about them, and we are explained: they say, there are other places dangerously. Competition! Although with food you have to be really careful for example, in the market near Blue Lake, which is on the way, baklava and achma, turned out to be the same age as my grandmothers, and by hardness they could to compete with bricks. 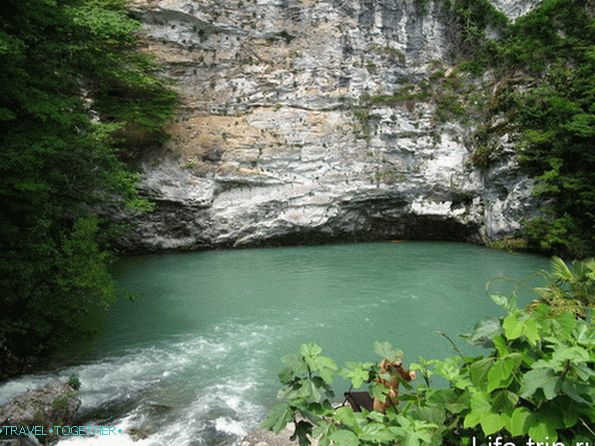 Lake Ritsa is a large lake surrounded by high mountains and with which is associated with many legends. On the opposite bank is the cottage of Stalin. 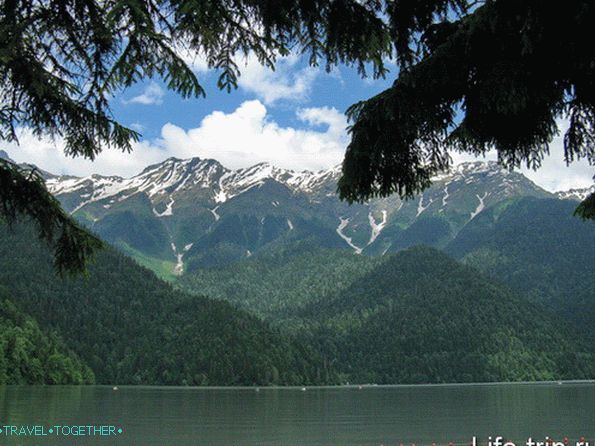 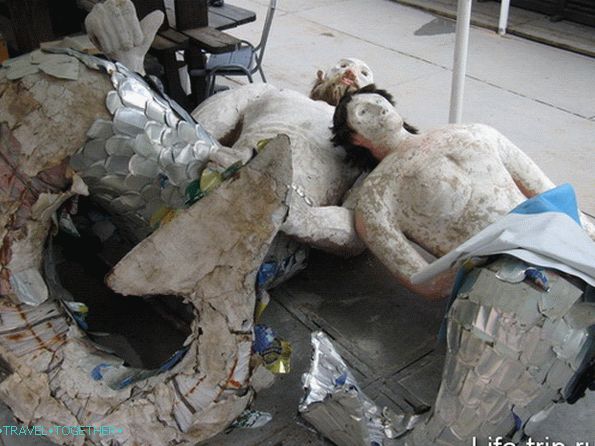 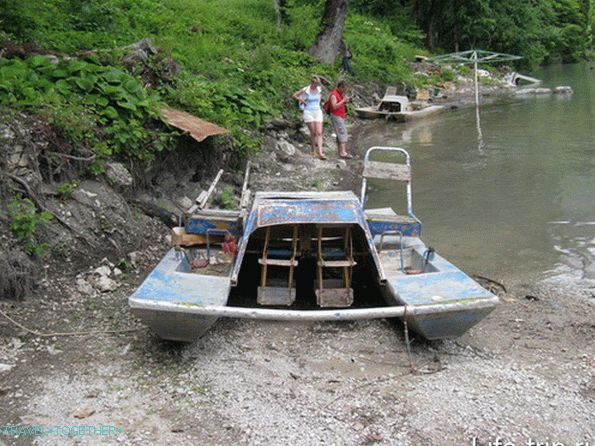 Then we came to New Athos, to the monastery and caves. At the cash desks in the New Athos caves a lot of people, but we are like tour out of turn missed. Talon on photographing we forgot to buy, but no one later checked us. We went to the hall, decorated with granite, with Abkhaz wall panels, we are waiting here local metro – small and thundering cabins that carry having a rest in a cave and back. In a cave about 10 degrees, well, that took warm clothes. It seems to me that the interior similar caves are similar to one another. I traveled to this in Azish a cave in Adygea, and I saw about the same thing: stalactites, stalagmites, stalagnates. And photos in the dark are obtained. 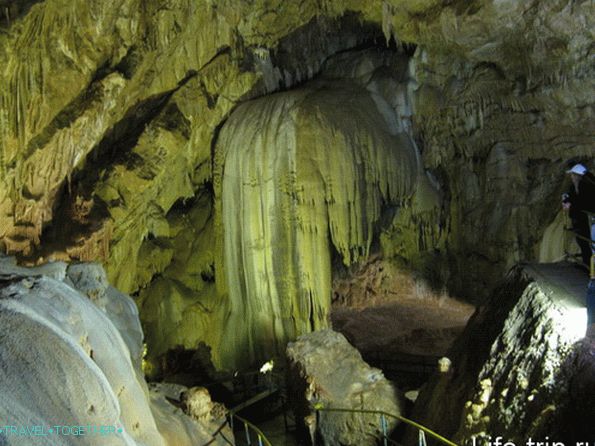 Novy Afon Monastery is located on a hill and there need to go uphill, so for the lazy pilgrims, the local organized transfer – “comfortable” truck of Soviet times, with seats in the back ride 5 minutes. The building of the monastery is being renovated, already done half the work. Inside the temple, on the high arches, traces from bullets. 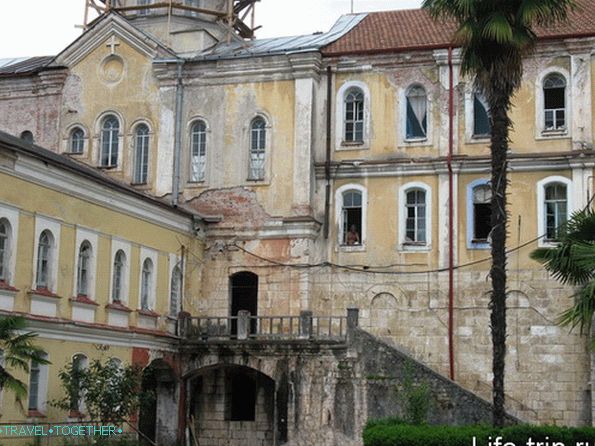 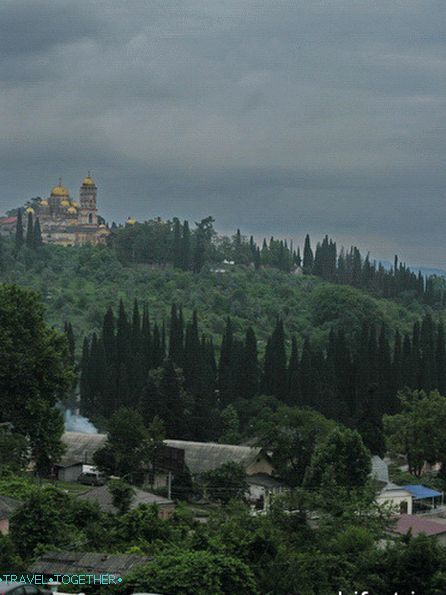 Immediately, in New Athos, we were all fed in a cafe. Hominy (national dish) we didn’t like it, maybe we need it with something there is…

Asleep on the way back, still exhausting visit in a hurry so many places. Definitely want to now go back to rest in Abkhazia, but for a longer time, and by themselves, in order to immerse yourself in the atmosphere of this fabulous country and enjoy it natural beauty.

By the way, we asked the guide about tourist trips to the mountains of Abkhazia, and so, she urged us to not do only if with a well-known local guide. Reinsured?

Abkhazia
Here I collected some photos that were not included in the story. about Abkhazia.

TURKEY
In the article we talk about the prices of holidays in Turkey in August.

MAGAZINE
Castle Horshovski Týn – a detailed description of the photo, mode of operation, location
Leave a Reply Cancel reply
Recent Posts
Categories
Recent Comments
Archives
This site uses cookies to store data. By continuing to use the site, you consent to work with these files.