Piazza Navona (Rome) – a detailed description with a photo of how to get there and location on the map. Fountains of Piazza Navona – photo and information.

Piazza Navona – the famous roman square in elongated rectangle shape. It is the most beautiful baroque the square of Rome, which is often popularly called “the area of ​​three fountains “. It is also an extremely popular place in the city, dazzling from the abundance of tourists and conveying the true spirit of Rome – noisy, a little sloppy but majestic and picturesque!

The name of Piazza Navona is derived from the ancient Greek word “agons”, which means a match. And this is due to the original function of this place as a stadium. In the Middle Ages “in agone” transformed into “navona”.

The story of Navona began in the time of Guy Julius Caesar. Of course, then there was no area here. Caesar built a temporary stadium, which served for the competitions of athletes. It was about in 46 BC In 85 AD under the emperor Domitian stadium has been expanded. It contained 15 thousand spectators and was richly decorated sculptures and other works of art. Now from him there are only ruins.

With the fall of the Roman Empire, many great buildings of antiquity went into decline. The stadium of Domitian suffered the same fate.

In the Middle Ages, parts of the stands turned into houses, and the arena became square. Interestingly, the new square has retained the shape of the arena, due to the fact that when it was built with new buildings it was used existing foundation. 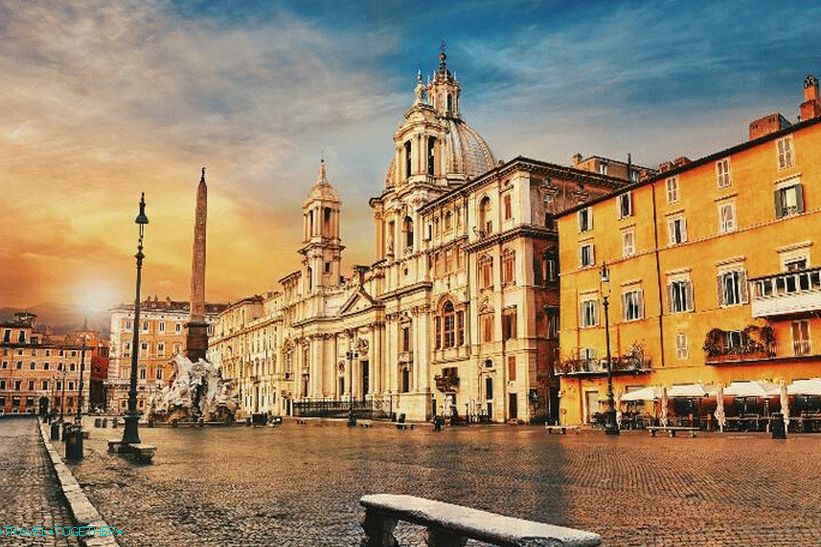 In the 15th century, Navona Square became the city market. Market existed for more than 3 centuries (until 1861). Now Piazza Navona becomes a market only for the Christmas holidays.

In the 16-17 century, Piazza Navona enters the Baroque era. Here were built beautiful fountains, a church and a palace. To the creation of masterpieces Baroque made their “hands” Francesco Borromini, Giacomo della Porta and the great Bernini. Piazza Navona at the same time acquired practically modern features. Last redevelopment area and fountains was in the 19th century.

Navona is best known for its fountains. The main one is the Fountain of the Four Rivers, the work of Bernini. 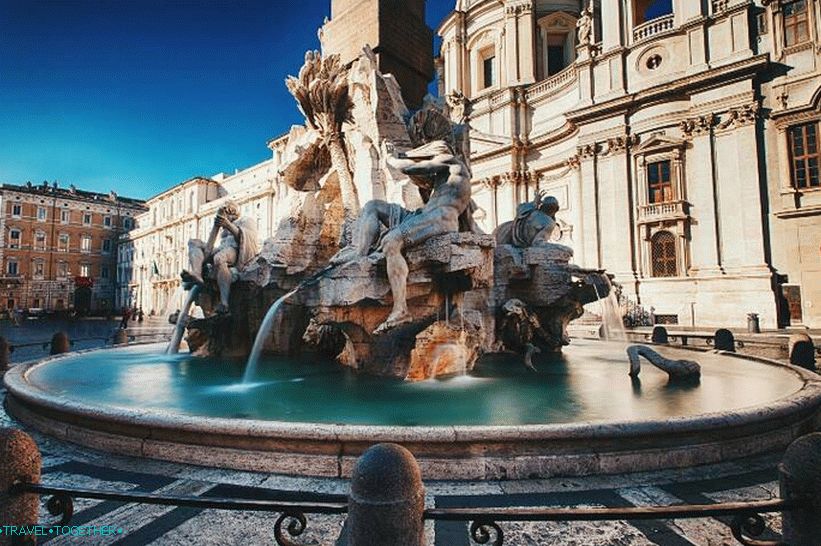 The Fountain of the Four Rivers is one of the most famous and beautiful. fountains of Rome, built in the first half of the 17th century by the project Bernini Interestingly, he, like Trevi, takes water from an ancient aqueduct – Aqua Virgo.

The sculptural composition of the fountain symbolizes the four great Rivers: Danube, Nile, Ganges and La Plata. Sculptures made of white marble. 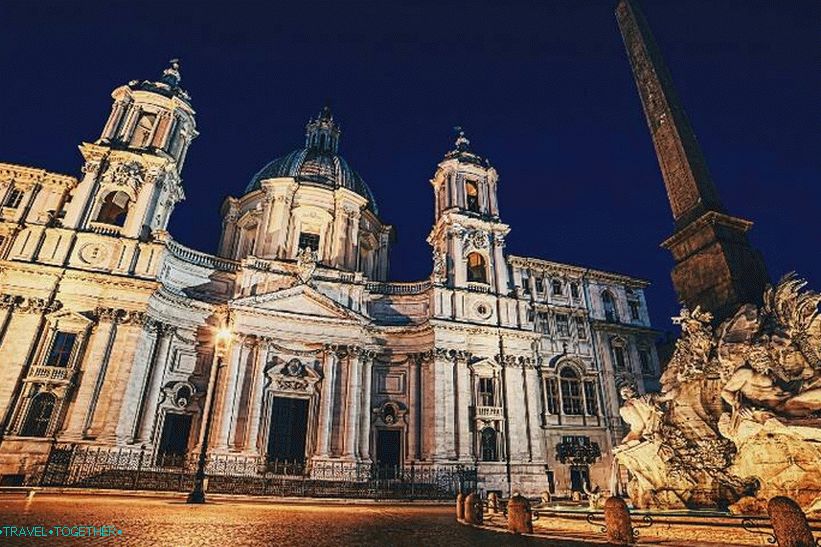 The dominant feature of the sculptural group is the Egyptian obelisk. (which was actually made under the emperor Domitian and decorated circus on the Appian Way). The height of the obelisk is more than 16 meters

An interesting legend is that the great Bernini laid in the sculptural group mockery and contempt over the creation of its main competitor – Borromini, the project which was built Basilica of Sant’Agnese in Agone. Three rivers turned away from her, and Sculpture of Nile as if afraid that it will fall. The truth is that Bernini built a fountain earlier than Borromini church. 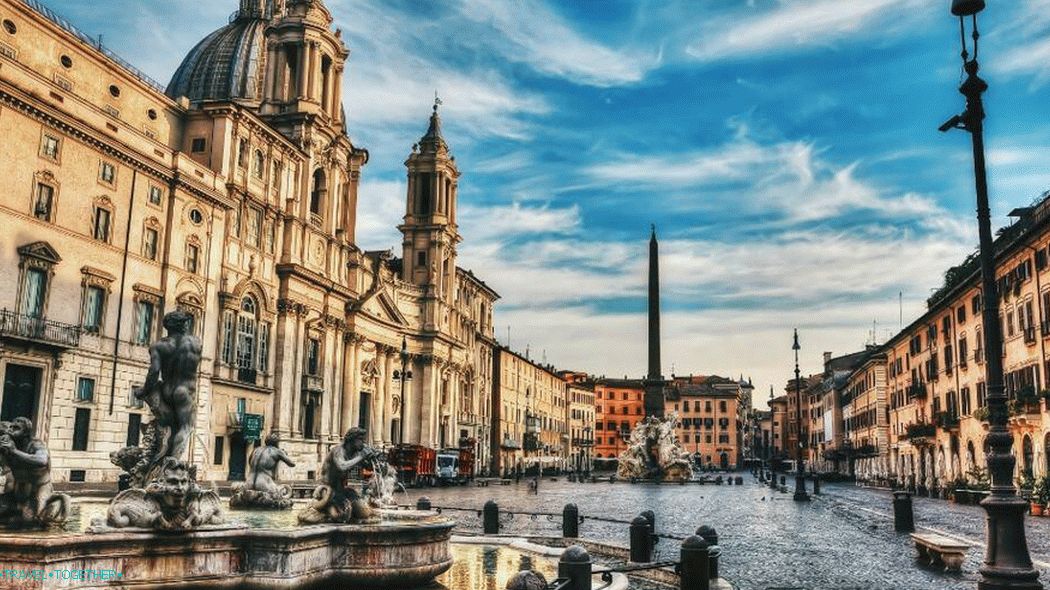 The fountain of Moor is located in the southern part of the square. Fountain first was without sculptures. The sculpture of the Moor was made by Bernini in the 17th century, and at 19 did everyone else. 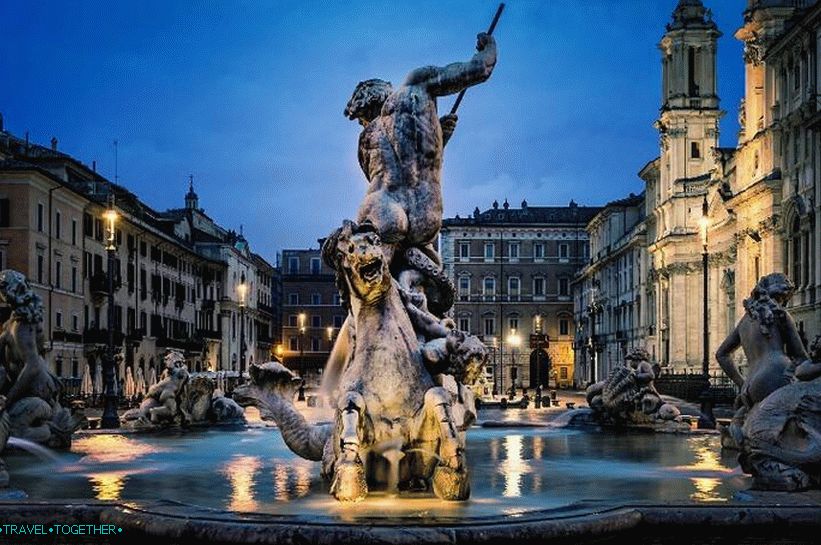 Neptune Fountain occupies the northern part of the area. Also until the 19th century he did not possess a sculptural composition.

Other sights of Navona

Basilica of Sant’Agnese in Agone – beautiful baroque church 17th century with two bell towers by Borromini. Although initially The architects were Rainaldi. The church has a rich and rich interior decoration. Dedicated to Saint Agnes – Early Christian martyr 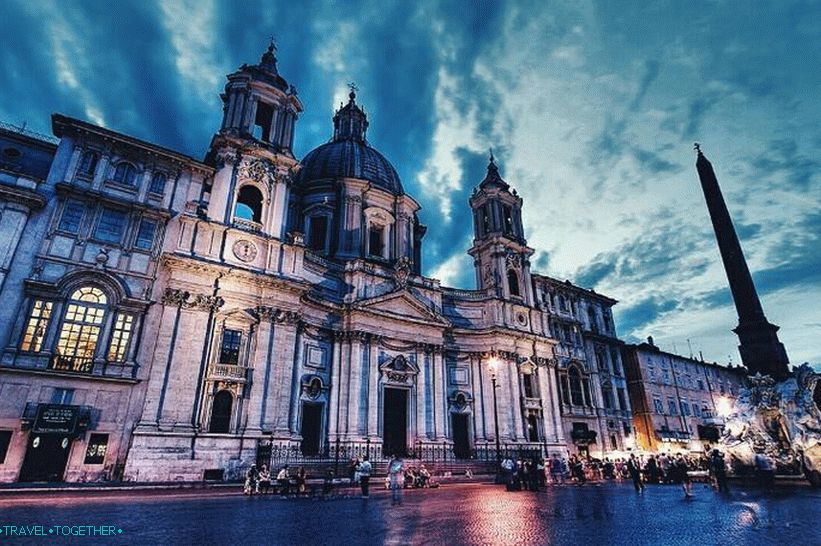 Basilica of Sant’Agnese in Agone on Piazza Navona

Palazzo Pamphili – the palace of the mid-17th century, which was built by order of Pope Innocent X. Participated in the construction of the Palazzo Borromini, Raynaldi.

Palazzo Braschi – the palace of the late 18th century, built by Morelli.

Piazza Navona on a map of Rome