MahaNakhon skyscraper in Bangkok was commissioned in 2016 and became architectural dominant business district Silom. This is the highest building in the country, its height is 314 meters; surpasses the Baiyoke Sky tower by 10 meters. And only the tip of the spire the latter, being at the level of 328 meters, gives him the right challenge the primacy. On the construction took, according to various sources – from 515 to 640 million dollars. Observation deck in a skyscraper MahaNakhon gives a 360-degree view, opening from it species have not had time to multiply in millions of copies, so they особенно интересны. 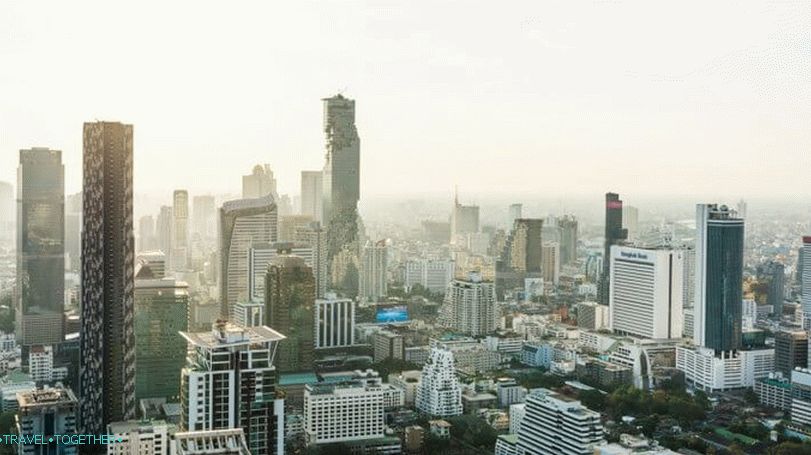 МахаНакхон– это комплекс зданий,consisting of a high-rise tower with a height of 77 floors and a seven-story extensions in the form of a cube. It combines a residential building (209 apartments), shopping and entertainment center of 10 thousand square meters. meters and a restaurant, as well as a hotel (The Edition Boutique Hotel) at 159 numbers. The area where it is built, one of the most expensive in Bangkok. Apartments in the skyscraper cost from one to seventeen million dollars. 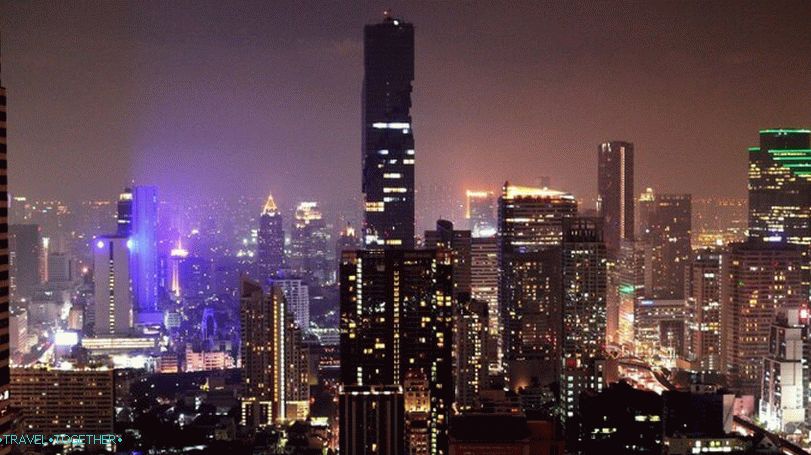 Author MahaNakhon (translated from Thai “Megapolis”) – is the architect Ole Scheren (Ole Scheeren) from Germany, originally working for OMA under the direction of Rem Kolkhasa In 2010, he created an independent architectural bureau. Büro Ole Scheeren. Ole Sheren stands out from her workshop striving for innovative experiments, in his projects the form and functionality argue and simultaneously complement each other. is he The author of the project skyscraper Ankasa Raya in Kuala Lumpur, the capital Malaysia, Duo twin skyscrapers and Interlace housing estate Singapore As well as a complex of buildings of central television in China and the Taipei Center for the Arts in Taiwan. Some of them are already implemented. 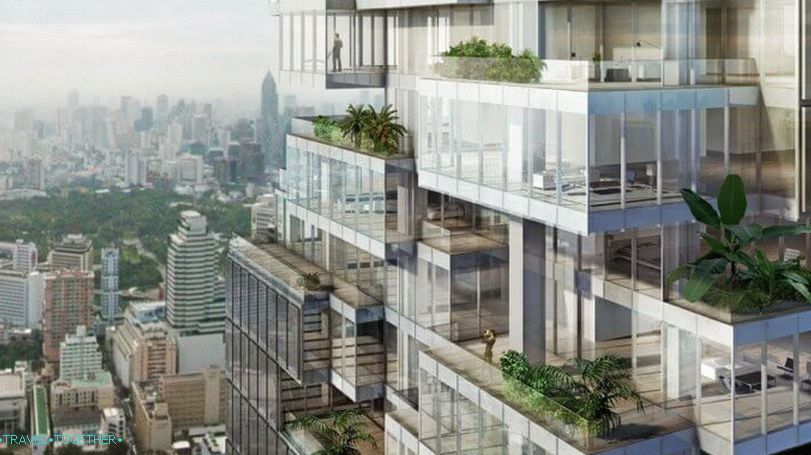 The appearance of the MahaNakhon tower is very unusual among Thai residents. There is still no consensus regarding the capital. To someone he I strongly dislike it, others are delighted with the author’s intention, thanks to which there is no second such skyscraper in the whole world.

This MahaNakhon skyscraper does not have a massive plinth, peculiar to all high-rise buildings built prior to the beginning of the XXI century. Its base seems to dissolve in the adjacent building up. But this is not what makes his appearance completely unusual. From the foot to the top is a square tower covered by a spiral which destroys the integrity of the facade of polished glass and creates unique relief, which, according to architects, is similar to rock break. Others see it as a rugged mountain stream. flow. Fans of the same virtual reality and style Hi-Tech see in it the embossed pixels, MahaNakhon’s tower tower Bangkoka was attacked by aliens from the comedy Pixels. In general, the author’s imagination gave food for thought and debate, which will last not one decade. And for tenants and hotel guests this architectural delicacy was a bonus – because it is the basis for balconies and galleries, from where it opens unforgettable view of Bangkok.

The architect explains this facade shape with his own concept, according to which such a form opens the outside world to the inhabitants of the tower and facilitates communication with him. He believes that when residents become comfortable with their apartments and decorate the protruding balconies tower Maka Nakhon in Bangkok acquires a finished look, because everything the sharp corners of the “pixels” will smooth out, resulting in the construction will become more alive and even spiritualized.

The living space of the tower MakaNakhon, which did not fall into the zone so-called pixelation, planned quite standardly, Most of the apartments have two levels. Their balcony windows fold inward and upward, giving residents access to the immense open space. According to the author of the project, this is exactly what allows maintain mental connection between the inhabitants of the skyscraper and Bangkok. 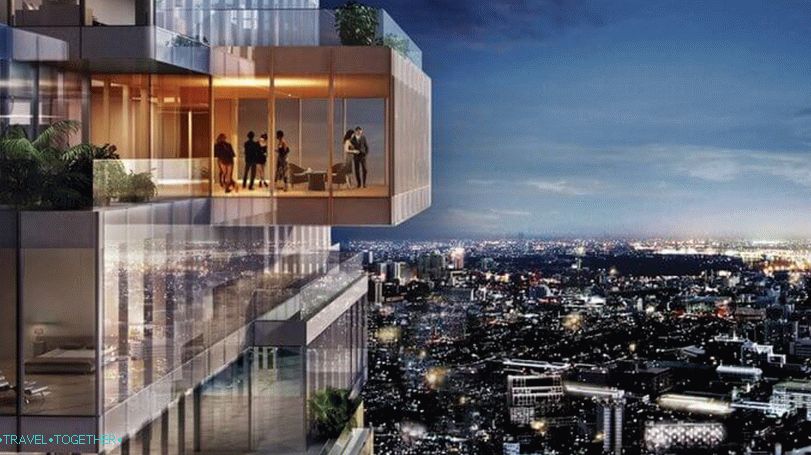 The Maka Nakhon skyscraper in Bangkokestro from 2011 to 2016 year. During this time, the country has experienced two revolutions, a military coup and flood. Therefore, it cannot be considered just a building, just a skyscraper, even if it is magnificent and unusual in appearance, erected in a bold experiment. For its author and for most of the inhabitants of Thailand, he is a real pride a symbol of the country’s entry into a new stage of development, its confident progress along the path of progress and readiness to overcome any difficulties on it. 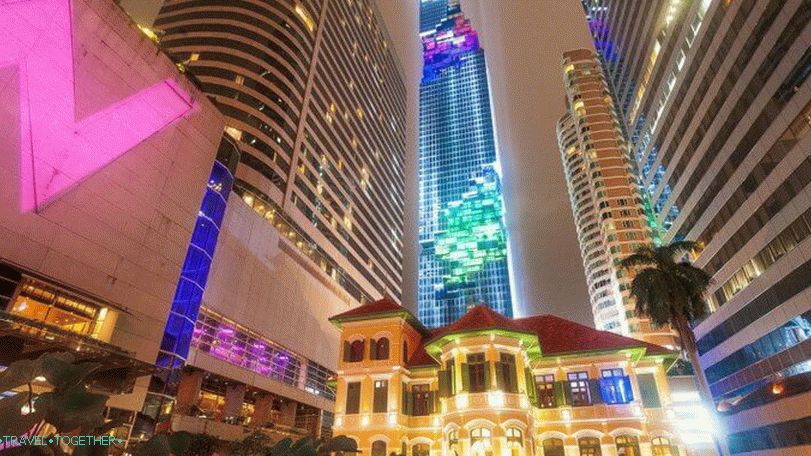 Today, the MakaNakhon Skyscraper in Bangkok– it is also a symbol of the daring creative impulse of the architect, and one from the architectural dominants of the capital of Thailand, and even the subject national pride. However, he will soon give up the palm Magnolias Waterfront Residences, which is under construction, which is one meter higher than it. And the launch of the Rama IX is around the corner. – the tallest building in all of Southeast Asia, the project whose height is 615 meters.