New day, new hitchhiking! So we thought going on the road in Beysehir. The next item on the program – Cappadocia (Goreme). In sweet anticipation from new impressions I raised my hand in anticipation of a stalled car and I stood there for 1.5 hours. Then, oh joy, a man drove up to broken-down machine of unknown production. We are very long “talked” in Turkish, showed maps to a friend, looked for the right destination – And after the words: “- Okay? Okay!” He left despite on hope in our eyes. What we talked about remains a mystery to so far.

Having decided that it was time to take a bus ride, we returned to bus station, and after a couple of hours we were driving in a comfortable bus in the direction of Nevsehir, one of the cities of Cappadocia. Ticket cost 25 lire (500r). On the way we drove Konya – the capital of the spinning dervishes. This is a kind of spiritual development. Spinning around its axis and type almost llama enlightened. Unfortunately, from we didn’t see dervish bus windows, people walked in the usual way and on the spot did not turn. 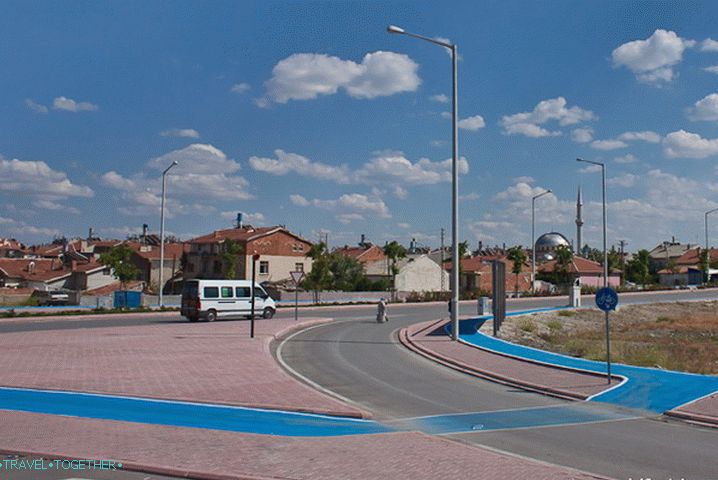 In one unremarkable place the bus stopped and in the luggage compartment stuck either a piece of tractor, or a hefty walking tractor. The floor of the bus fell out to look at this action. We have so the technique, however, is not transported. 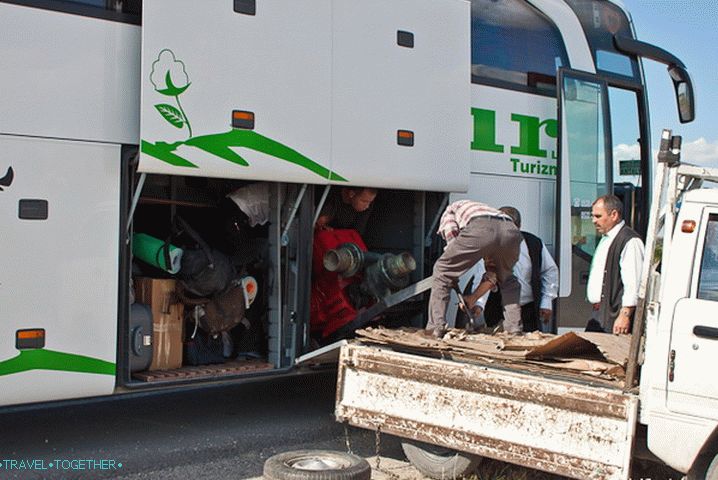 The mountains were replaced by fields, plowed or planted. Provincial landscapes amaze with their succession of colors. Probably here these 60% of the population occupied by rural farm. . 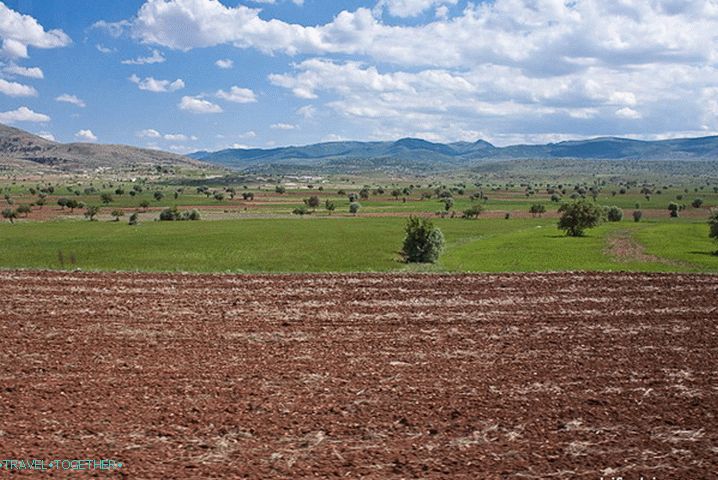 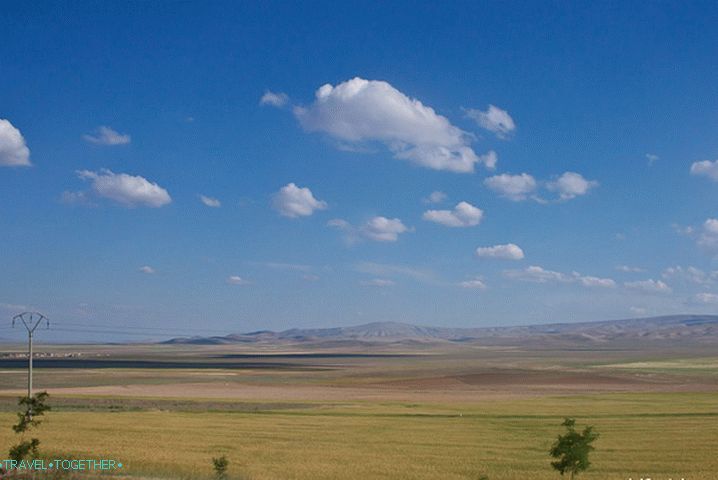 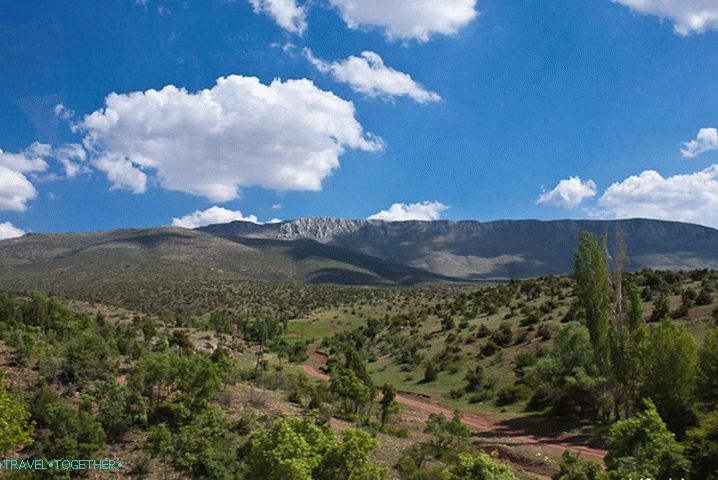 Finally, we were landed in Nevsehir, the center of Cappadocia. Himself Nevshehir we decided not to look, because it was getting dark, and therefore immediately went to look for a bus stop. 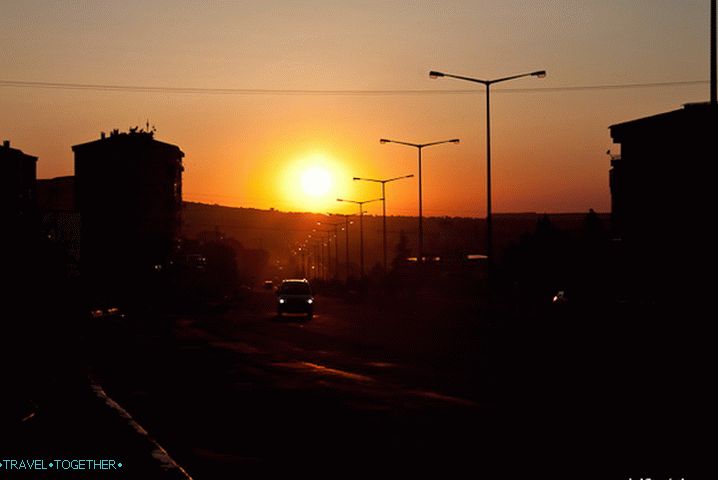 To the village of Goreme, where all the sights Cappadocia, we got to the dolmush practically at night. 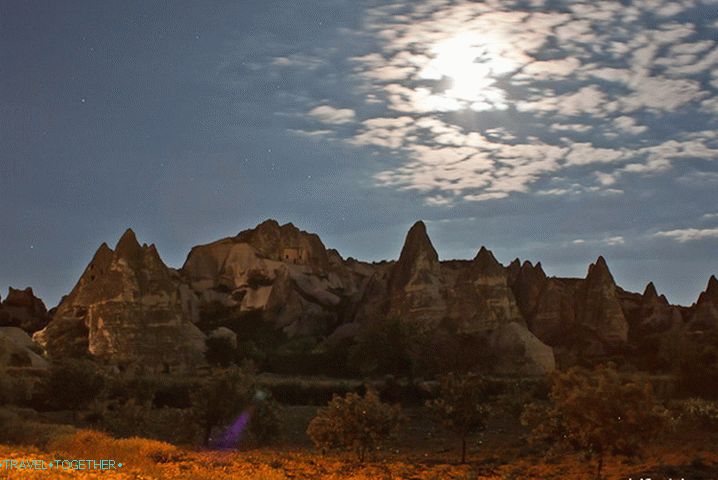 Cappadocia in the night. Goreme.

And again, under cover of darkness, for the umpteenth time, we had to look for a place under the tent. An interesting thing, I tell you, with flashlight to climb unfamiliar terrain between mushroom-shaped rocks. Bumping into the “Take off area Anatolia balloons” sign, we not at all embarrassed rose 100 meters from her. No, well we knew that balloon is a balloon, but we had no idea scales—

At about 6 in the morning we jumped from loud noises. How then do we understood, this is the burner of balloons so hiss, and jumped out of tents. And darkness around us darkness of these balls, and one of them hovering above us, and people waving their hands to us. It turned out that we are standing not far from the launch site of these balls. And there are dozens of them in the sky, the rest are noisy at the start, and everything it’s at 6 in the morning! 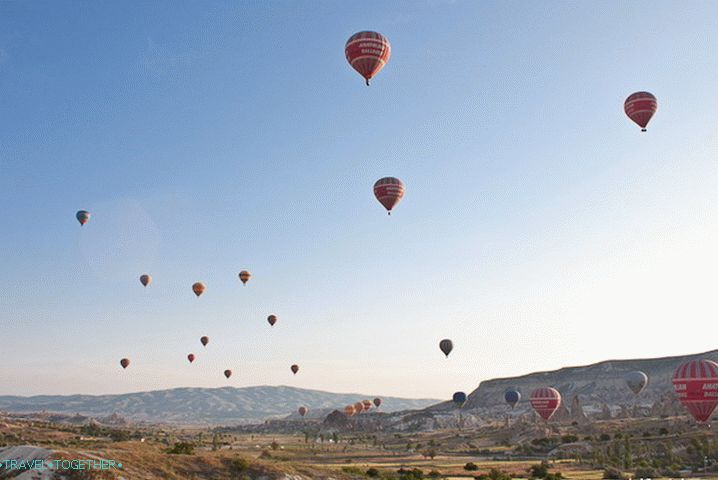 The darkness of the balls over Goreme. Cappadocia. The most ordinary balloon.

True, the place we still did not change, as to the center the village was only 10 minutes walk away, the place is secluded and people almost no, except those in the baskets of balls. Prices at the campsite – 20-22 lira (400-440r) with 2 people and tents per day, and do not correspond data from the internet. In principle, not very expensive, but our the place was no worse, only there was no water, but even there the exit was found, thanks to clean and free toilets. To be continued — In the next article, 2 days of independent excursions in cappadocia.

How to get to Cappadocia? Everything is very simple. First you need to come to Turkey. Practically from any city go buses of different companies. You can buy a ticket before Nevshehir, and to Goreme, everything is near. Per day bus in this direction. For example, a bus from Kemer to Cappadocia was leaving at 21.40 and costing 45lire (900r). Here in more detail, with maps: Cappadocia, how to get.