Royal Palace in Bangkok, Thais consider sacral place, the center of not only the capital, but the whole country. AND this is despite the fact that the royal couple no longer lives there, but the official residence of the monarchs moved to another place.The part of its territory continues to occupy state institutions. In one of the buildings of the palace complex they hold significant official events for the country. Now he open to tourists. There really is that look.

Grand Royal Palace in Bangkok – it is not a separate building, and the whole complex, its area is 218 thousand square meters. meters It is bounded by four walls, the perimeter length of which equal to two kilometers. In addition to the Grand Palace itself, behind them temples are located (for example, the temple of the reclining Buddha), 95 pagodas, art galleries, museums, the pantheon of the royal family … The visitors of the complex are met and escorted by five-meter statues. demonic creatures – Yakshi, whose duty is protection treasures of the gods. Statues of other mythical creatures and this traditionally for the culture of Southeast Asia, decorate literally every meter of the walls, stand at the entrances to the buildings. Many images of Garuda and Kinari – bird-people. And to go to the main temple will succeed only under the attentive gaze of two bronze lions.

Tip! Lovers of cultural attractions Thailand is also recommended to visit the Royal Palace in Hua Khin, built in the first half of the XX century and made entirely of teak wood.

Excursions to the Grand Royal Palace of Bangkok include visits to several attractions of this complex:

Queen Sirikit Museum of Textiles (Queen Sirikit Museum) – Here are samples of textiles from all regions of Asia: East, South and Southeast. By format – the usual European the museum. There you can learn about the history of Thai costume, learn some secrets of silk production, see the queen’s wardrobe, watch the work of the craftswomen on the handloom. AT the shop at the entrance you can buy exclusive things manual work. Pavilion Of Regalia (Regalia Pavilion) – a peculiar monetary the courtyard where the coins of Thailand are represented from the moment they started their minting to our days, as well as the technological process and tools in it used In the kiosk at the entrance you can buy commemorative coins. different denominations and sizes. Temple of the Emerald Buddha (Temple of the Emerald Buddha) – part Royal Palace in Bangkok, which holds the symbol of Thailand, Shakyamuni Buddha Statue, Made of Jade. Its height is 66 cm. Temple decorated with frescoes – wall paintings with very accurate drawing details. Its covered galleries provide excellent shelter from the sun. therefore there are always many tourists. We rightfully included it in list of the most beautiful temples of Thailand! Chakri Maha Prasat Hall (Grand Chakri Palace) – and there is the King’s palace in Bangkok, its apartments are in the west wing and queens in the east. In the guise of a palace surprisingly combines Italian Renaissance and traditional thai motifs. He is full of flowers and greenery. For Inspection is available only part of the first floor where the museum is located weapons – cold and firearms. Near the palace is located Pavilion of artillery. Prasat Phra Thep Bidon (Shrine of the Heavenly Ancestors) – Royal Pantheon, available for inspection in the Grand Palace once a year, 6 April, the founding day of the Chakri dynasty to which the ruling monarch Phumpion Adulyadej (Rama IX). 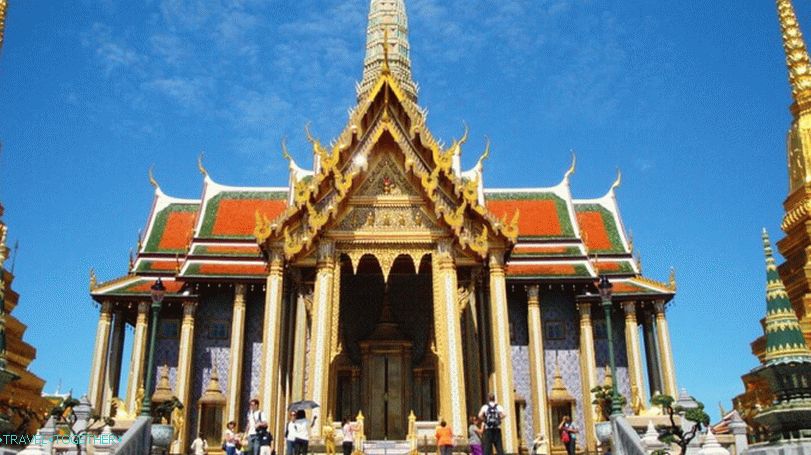 Phra Maha Monthien group (Supreme Residence) is a complex of three buildings. In the main hall receptions are held at the highest level On the day of namesake there is awarded the citizens of Thailand, having special merits to the ruling dynasty and the state. Phra Thinang Boromphiman – a palace surrounded by a garden. Also only available for external examination. They take the heads of state and especially revered Buddhist monks. Walls of the palace halls painted with frescoes and a list of virtues that the monarch stuck to stick. 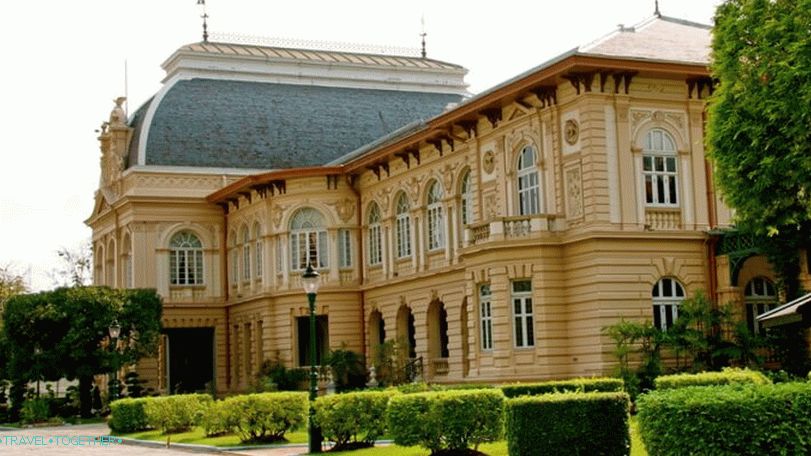 Mode of operation and price

The royal palace for visitors opens at 8.30, stay in the complex is possible until 16.30. An hour before the tourists close let stop. The ticket office is located on the river side. The total cost of visiting 500 baht, for this amount you will get a pack tickets. They must be presented at the entrance to various palaces and temples. Still 200 baht worth paying for Russified audio guide.

The Royal Palace in Bangkok is next to the embankment of the Chao Praya River (Menam Chao Praya) and Sanam Luang – the main area of the capital, which is a huge green field oval shape. Unfortunately, there are no Bangkok stations near them. underground. Therefore, the most convenient way to visit the palace complex is a river trip to Tha Chang pier. Rising from rivers past the market, you will immediately see the white wall, behind which the residence of the monarch is located. Entrance to it from the street Na Phra Lan. The price of a ticket for a river tram does not exceed 30 baht, it depends on the distance.

An alternative to river transport is buses number 1, 32, 53, 503 and 508. The trip costs between five and 25 baht. To get to the Big Year in Bangkok, you can hire and tuk-tuk, explaining to the driver that Need to go to the King Palace. If you pay by the counter, then this the journey will cost 200 or 300 baht.