Wat Saket (Wat Saket) – another good temple in the historic parts of Bangkok, where you can go on the way to some attractions. Although purposeful visit, too option, good to get to it is not difficult. As a rule, such temples, like Wat Pho and Wat Arun, are known to all, since to them in a huge number of pack tourists are brought by buses. AT to a greater extent, of course, it concerns Wat Pho, because it’s really There is something to look at – on the huge figure of the reclining Buddha. Wat Saket is remarkable mainly because it opens up views to Bangkok, so there are far fewer people here.

The temple of the Golden Mountain it is called not by chance. The fact is he located on an artificially created mountain, and at the very top installed golden stupa. Before the era of skyscrapers, Saket was one of The highest places in Bangkok. By the way, once this mountain subsided due to the weakness of the soil, but then it was restored. I hope more it will not happen, otherwise I am still going to return there. Visually Now everything looks very strong, all the grief is cleaned in concrete retaining walls.

Climbing the mountain is not difficult, literally 300 with a few steps. Although the sluggard will probably cause some, but not critical, difficulties. The mountain is surrounded by two spiral staircases, one on the rise, another on the descent. In fact, for some rise, without a difference. Where in the middle of the climb there is a cafe for those who are tired. Also by paths are met with bells and gongs, accessible to visitors, Call on health. And that is why in our Orthodox call no, it’s so cool— 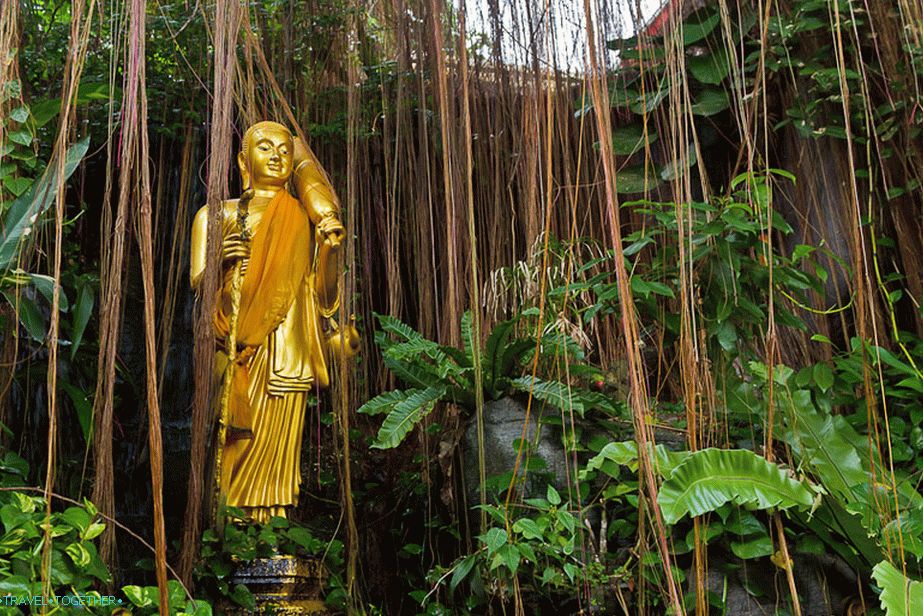 The first part of the climb goes through the jungle.

The first part of the climb goes through the jungle. 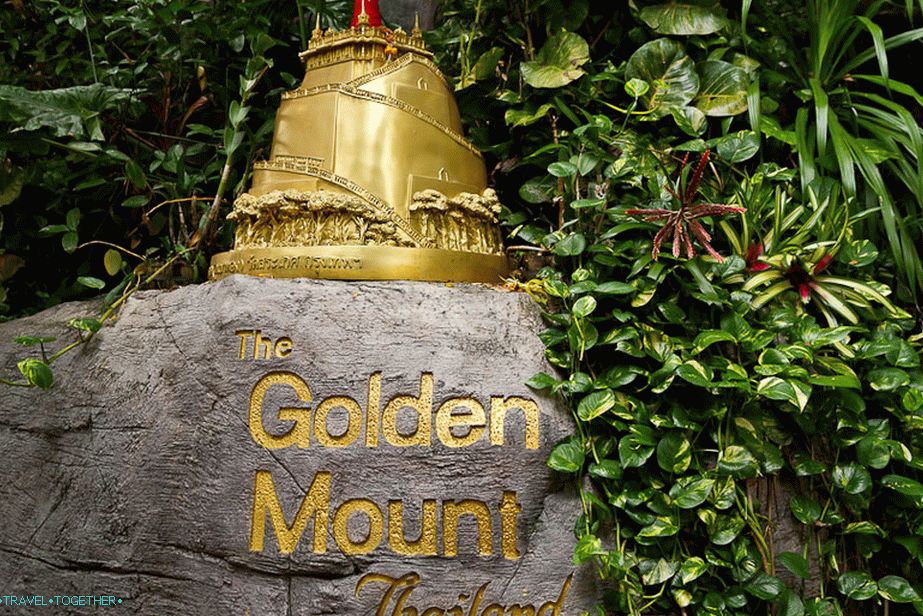 Wat Saket or Temple of the Golden Mountain 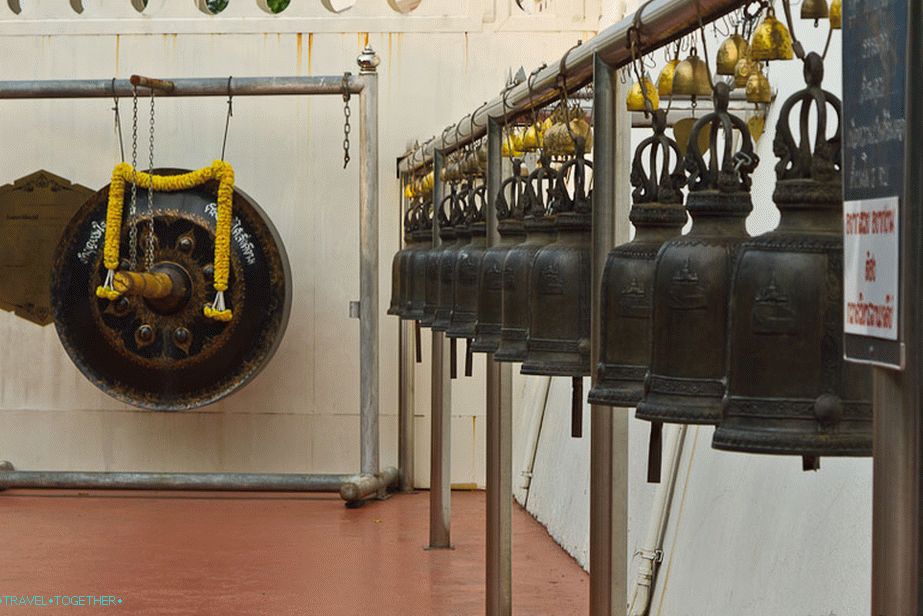 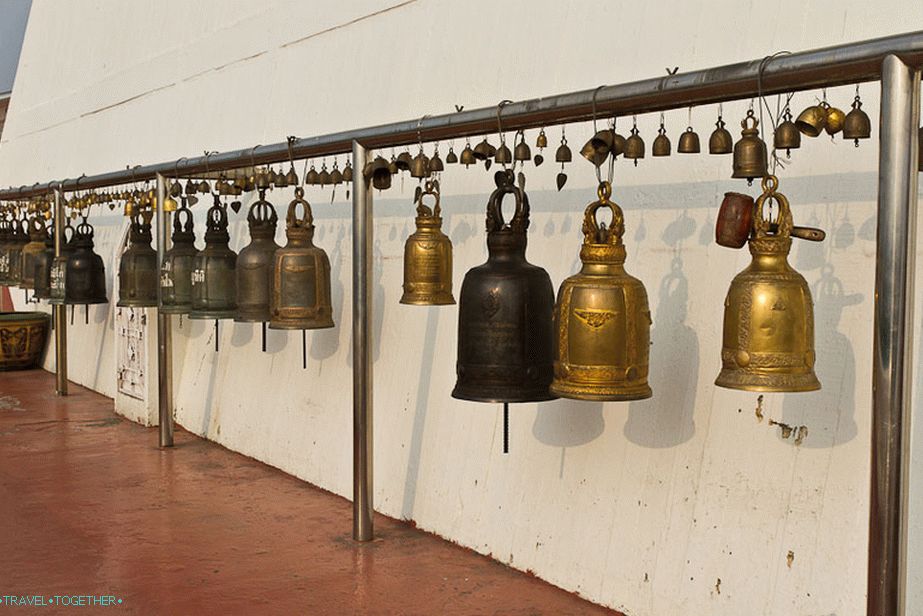 At the very end of the stairs are views of the Bangkok rooftops, both skyscrapers and poor hut. We go inside the temple and we see several typical Thai temple statues, there is even some relic hidden in a sarcophagus. From here comes the stairs on the roof to the observation deck where the gold one is installed mortar. Consider, if the heat of the day is hot, then it’s easier to observe the city from the large windows of the temple, and not from the observation platform.

Many people write that the Wat Saket temple has a rather pleasant atmosphere, and I can agree with them. Indeed, a sort of island tranquility in the heart of a big and noisy city where you want linger for a while and take a break from urgent matters and thoughts. 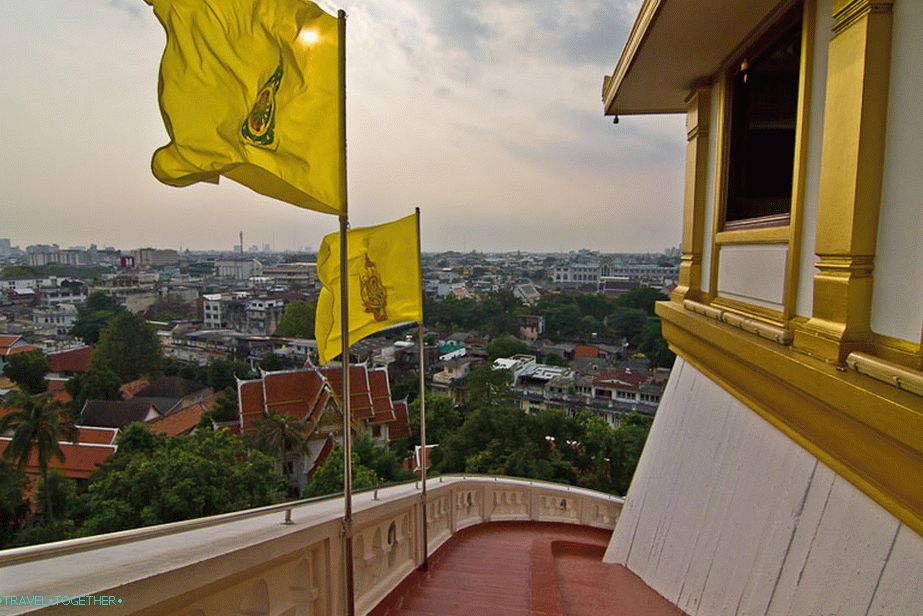 Views of Bangkok at the very top of the stairs 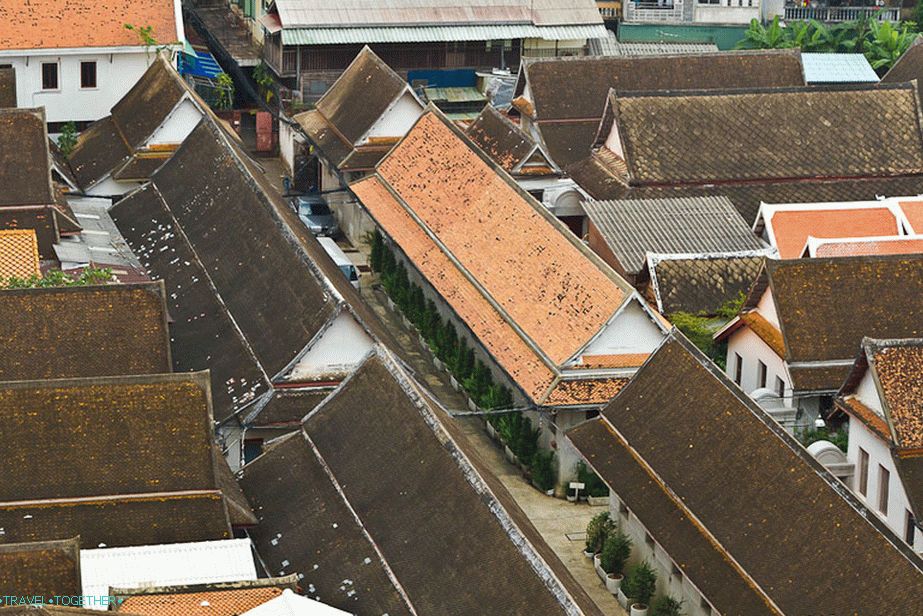 Below the roofs of the other buildings of the temple 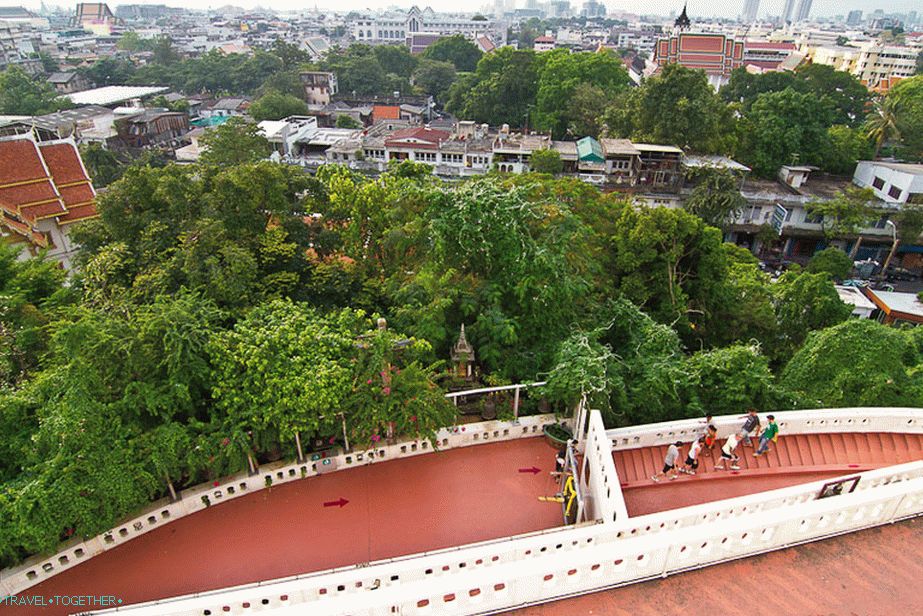 We look down and see the stairs around the mountain 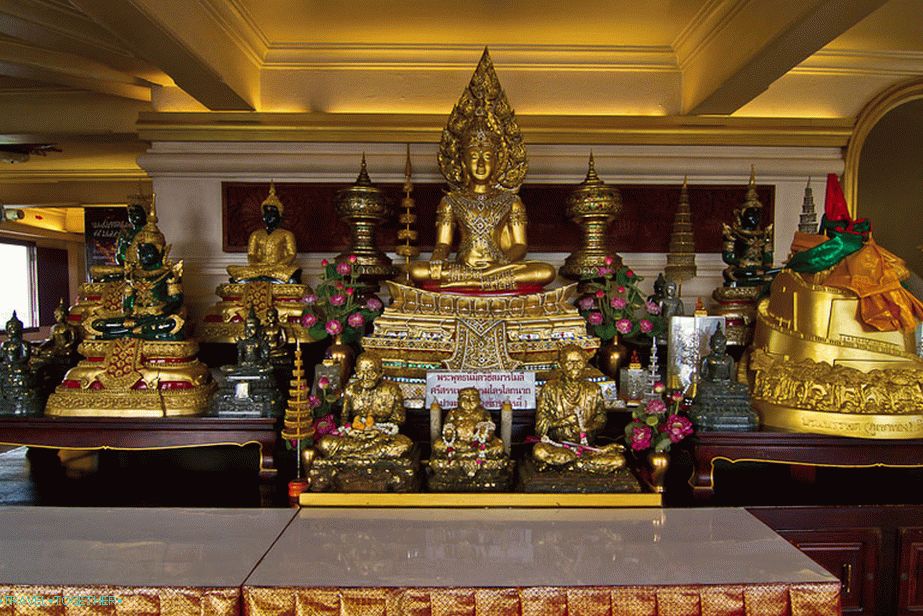 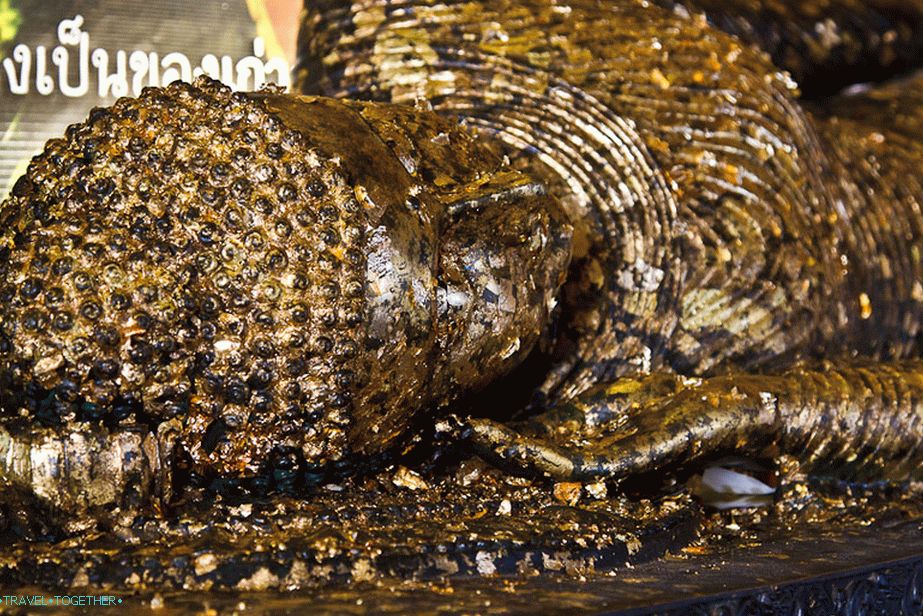 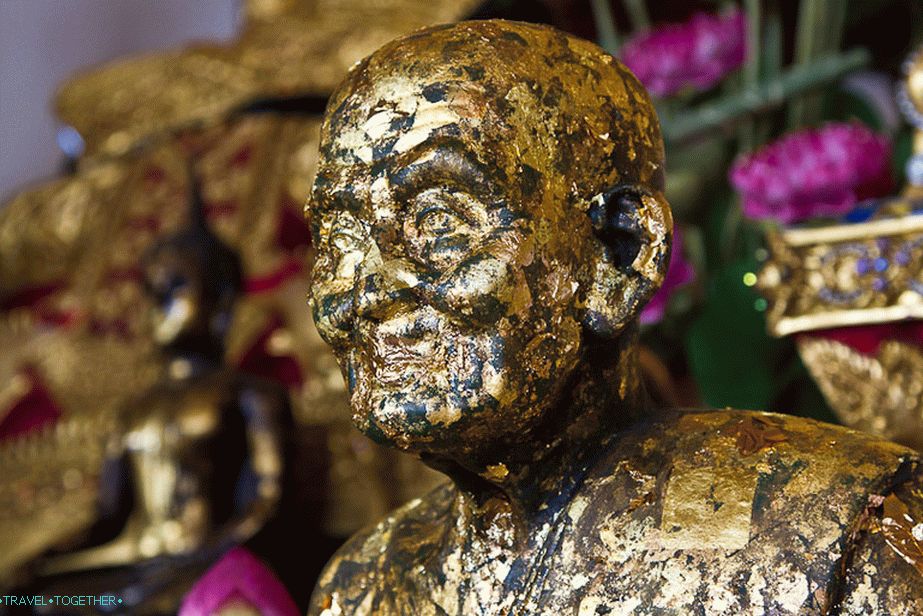 Monk covered with leaves of gold 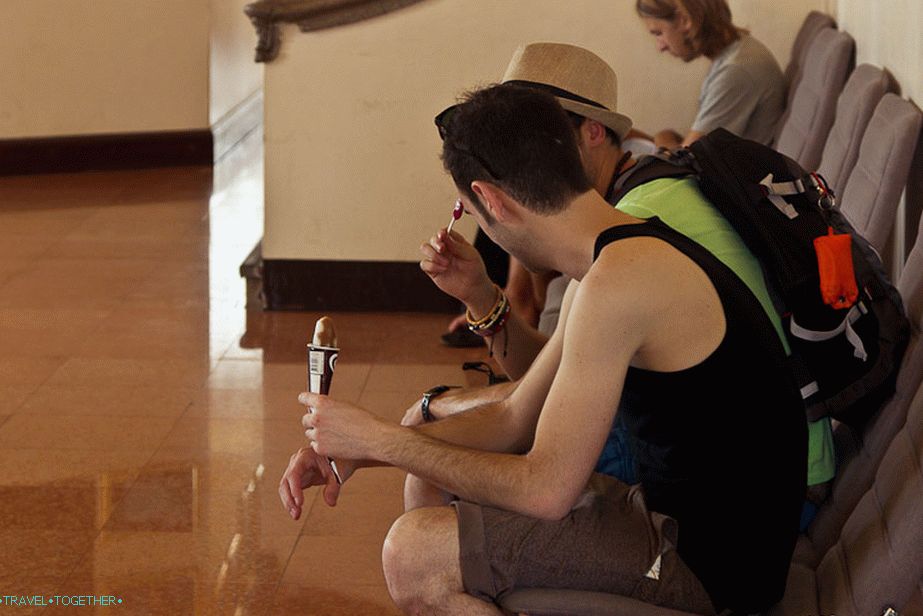 Inside the temple you can eat ice cream

On the King’s birthday, the asphalt at the temple was washed with soap 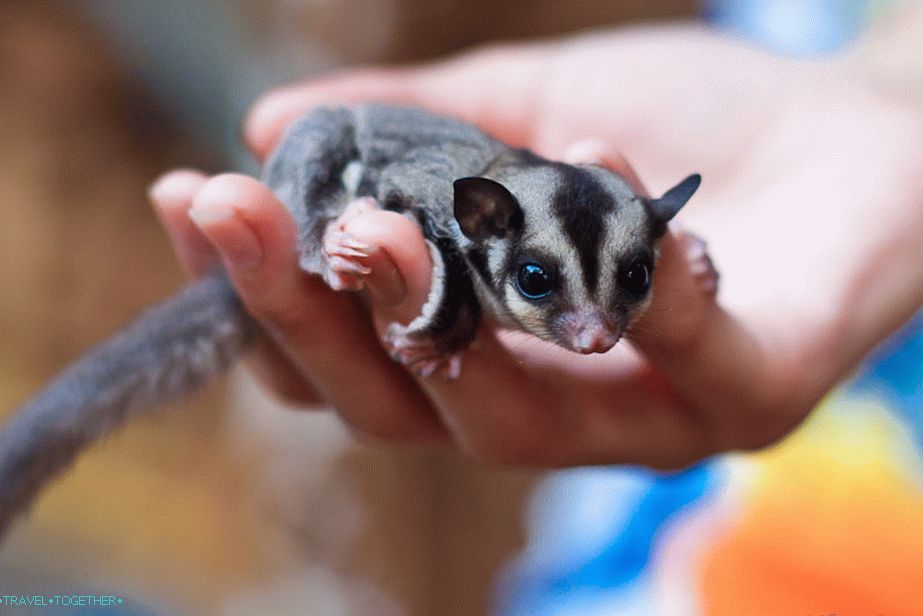 Once, not far from the temple, they were selling these lovely ones creatures

From Khao San Road to the Temple of Golden Mountain the easiest way to get there on foot, there is literally 15 minutes to go. For lazy people there is tuk-tuki, also take without problems. If you go from another part of the city, then the metro is not here, and either on city buses or on a klong (river channel) can be reached. The last is relevant if for example, coming from the Pratunam area, where all the malls located and the skyscraper Bayok Sky. Go from there somewhere for about 20 minutes and to the ultimate. In the opposite direction, it is also good to ride, not in traffic jams stand.

Opening hours of the temple Saket Wat from 7.30 to 17.30. Pity here You can not get in the evening, in order to see the night of Bangkok.

If you want to find a hotel and stay near this place, it is convenient to choose housing on RoomGuru, it is a convenient service where you can compare hotel prices in different booking systems.

I have stayed in Bangkok many times and in different hotels. I will not give links to all my reviews, I’ll give only a few. Nasa Vegas – convenient to stop near the airport and metro, Rajata – A good place to spend the night near Khaosan, S3 Residense is located in the center next to the park. 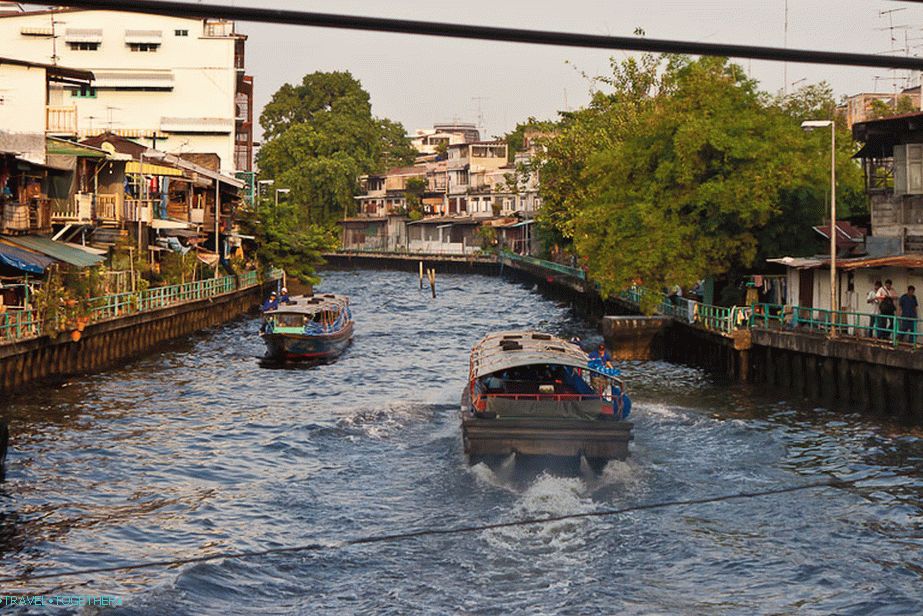 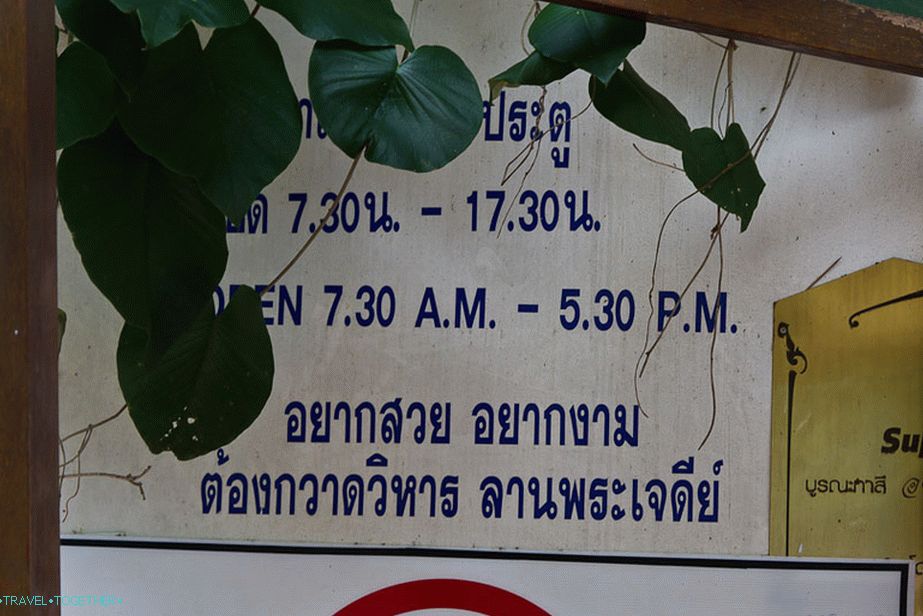 Travel Tips
Remember how in childhood we all climbed trees? I’m fine I remember that we

Travel Tips
The economy of Thailand is based on tourism and in ninety cases out of
Leave a Reply Cancel reply
Recent Posts
Categories
Recent Comments
Archives
This site uses cookies to store data. By continuing to use the site, you consent to work with these files.