Warsaw fell in love with me by a combination of some factors— Maybe move there for a while? Moreover, the scheme is quite real. But oh well, this is a topic for another post (I’ll tell you soon). And today speech about a great park, next to which I lived for 2 months.

Park Royal Лазazienki – this is what the Poles really can be proud of. After all, almost destroying Warsaw, the Nazis could not eliminate the park. They tried. Park buildings are stuffed explosive shells and set on fire. The fire did its job, but the facades in most resisted. After the war, Лазazienki was restored, and not recreated from the pictures, like the Royal Palace or the Cathedral of John Baptist in the old city.

Walking through the park Лазazienki

When we lived in Poland, we sometimes went to Лазazienki for a walk, the benefit of only 10-15 minutes walk from our apartment was. You know the park is really very cool. Somehow he looks like Tsaritsyn there is also a lot of nature and it is felt that he does not It becomes monitored condition. Total lack of garbage, no ruins 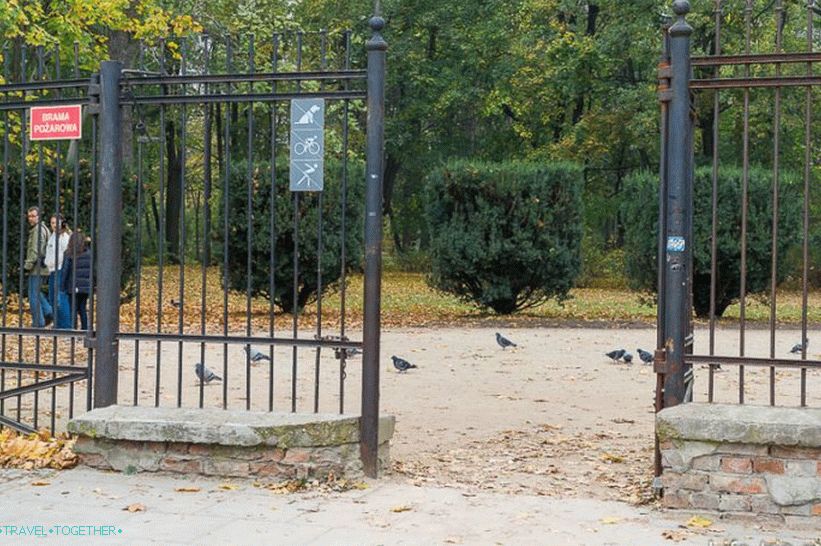 One of the entrances to Лазazienki, we see a ban on cycling, scooters and dogs 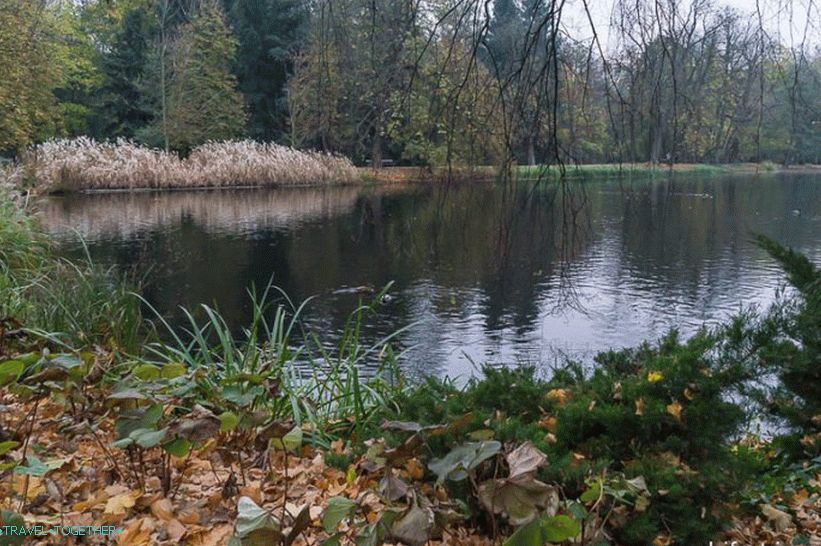 One of the ponds in the park 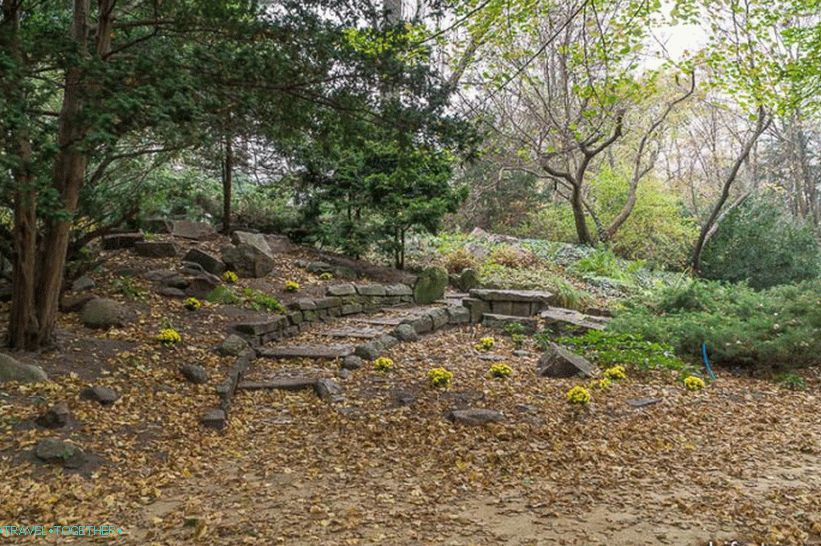 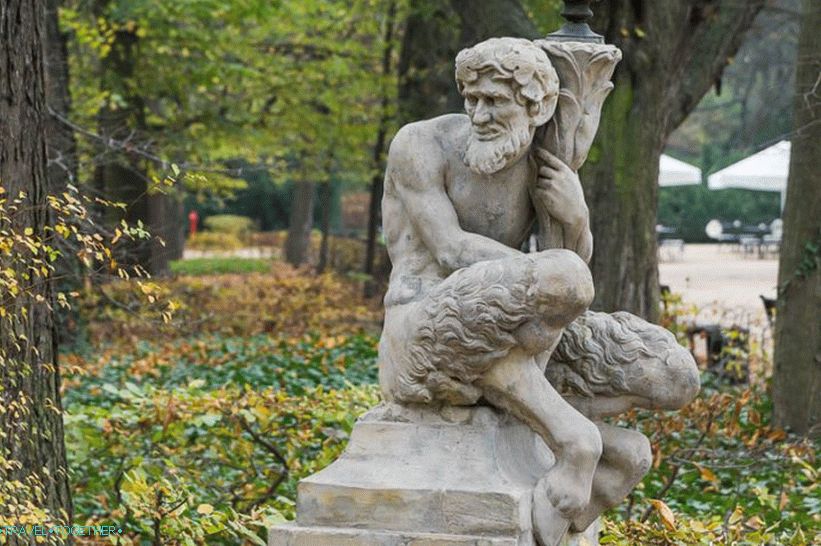 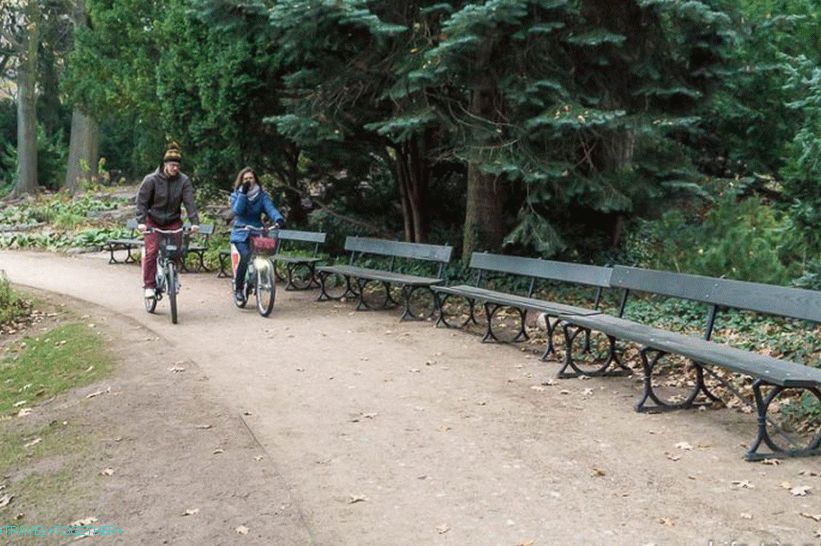 The ban on bicycles apparently not tracked 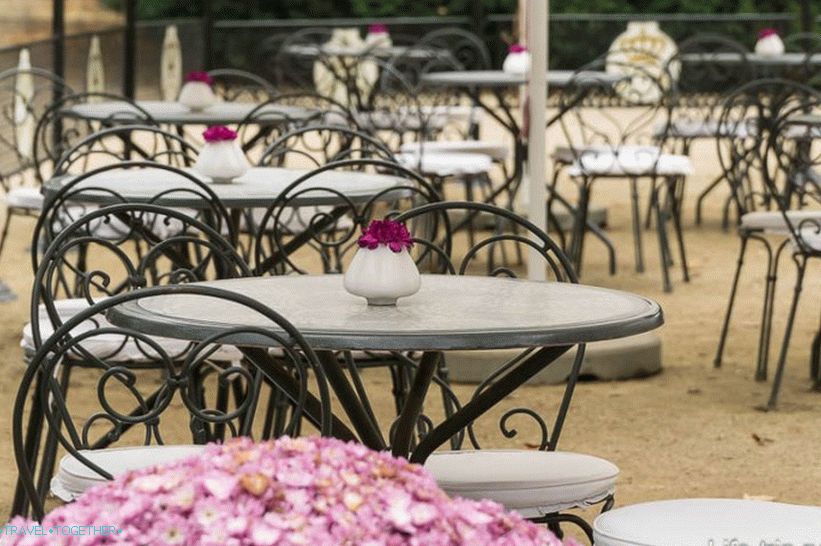 One of the empty cafes 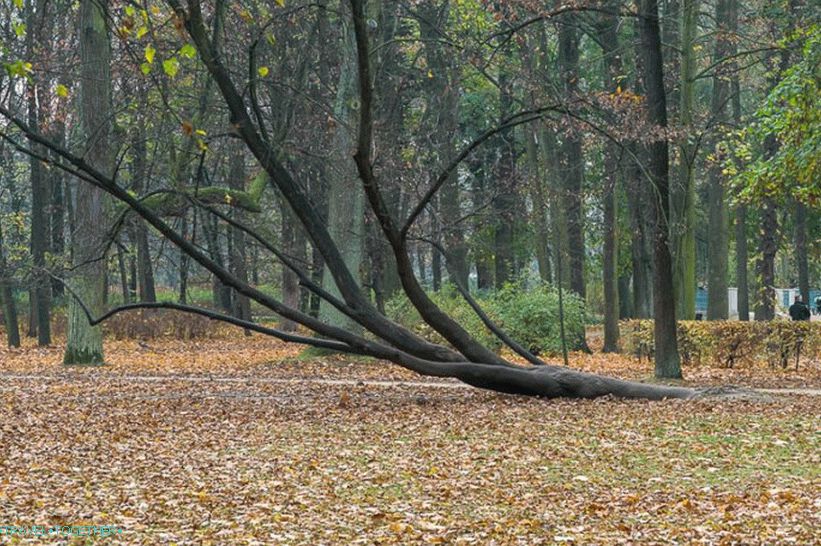 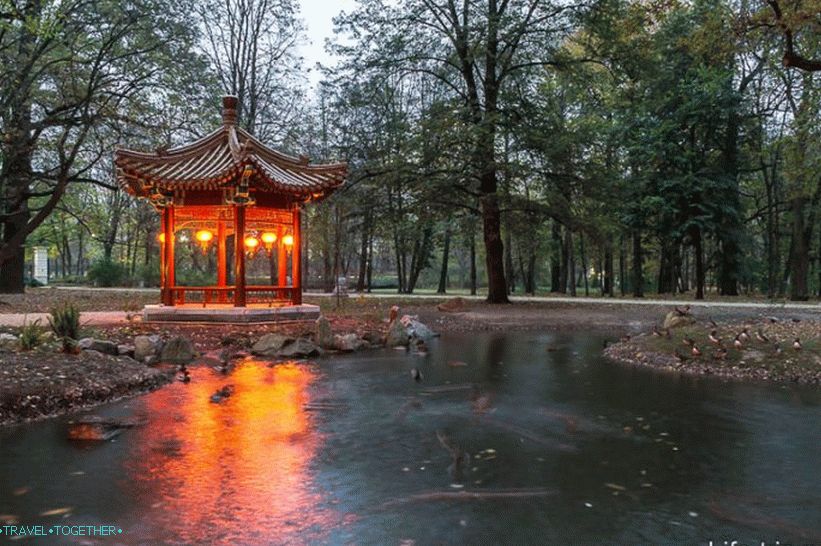 A corner of China in Лазazienki Park 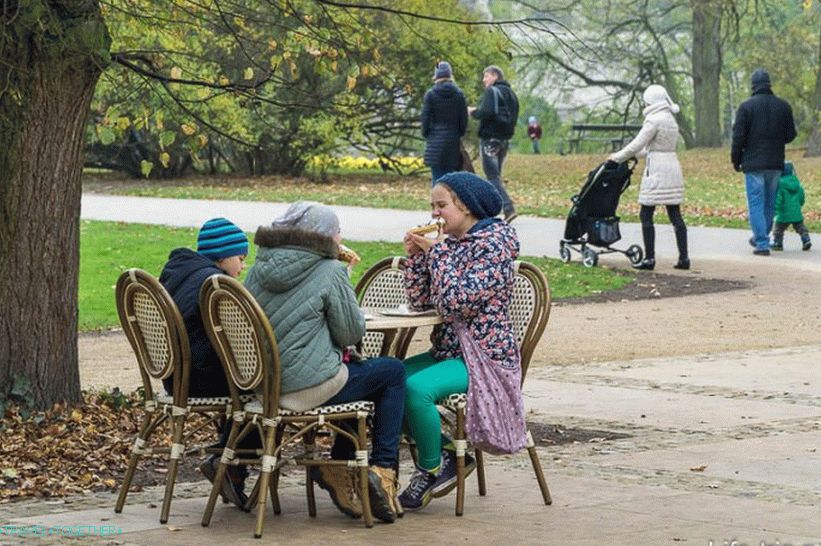 But the most important difference from many other parks, which me pleasantly struck – it is natural. Being here, you don’t feel that it is artificially created and maintained as it happens with many parks rolled to the full program in concrete, with cutting out trees, unnecessary decorations, when you immediately you see that this is a natural installation, but not a forest park. Here, By the way, yes, a very good word “forest park”, because the park can be without a forest, but I like forest parks, as a certain balance is convenient for walking in nature. And you know that organically complements picture? Foliage on the legs, which is not removed (hooray!), And peacocks with deer—

Peacocks are almost tame, you can feed them with any hands. pre-stocked nuts. Like protein, which also nobody fear. In my case, my son Egor was more fearful than animals, he scared, not them 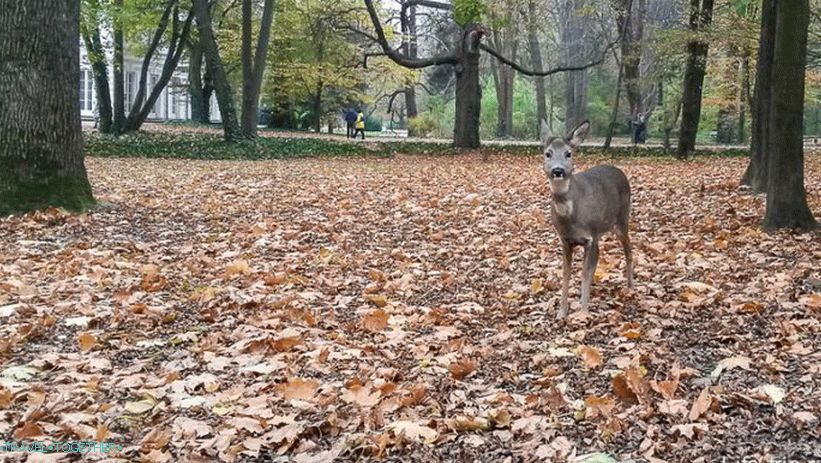 Deer in the park 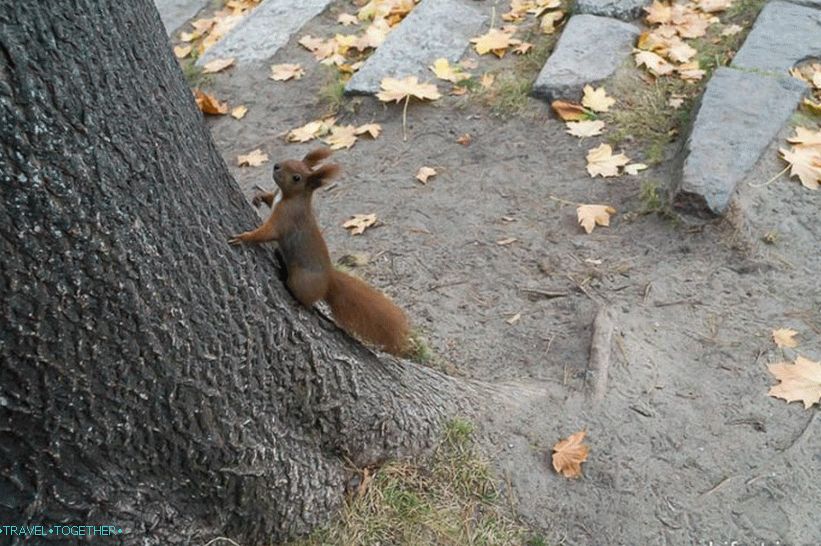 Squirrels run very fast, you have to set the shutter speed very short 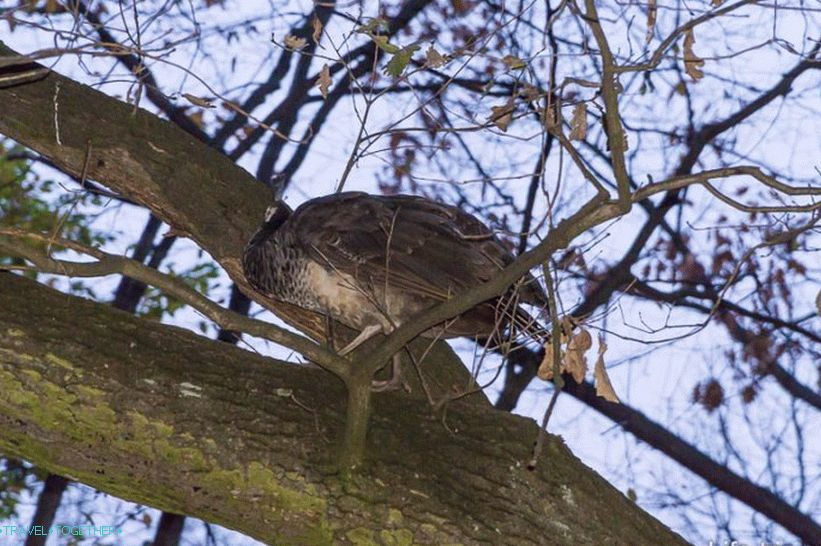 It turns out peacocks easily jump on trees and sleep as they go. there

Initially, the park was divided for a major Polish magnate Lubomirsky. His name – Лазazienki – he is obliged to the bathing Pavilion at the main palace of the complex (“bath” in Polish – “lazienki”). The architecture was dominated by the Gothic style. AT the middle of the XVIII century, the park was bought by Stanislav Augustus Ponyatovsky – last polish king. (After it began the republic.) By to the taste of the king, the complex was expanded, completed, reconstructed – in classic style.

On the map of the park – 44 objects worthy of attention. Most significant – about ten.

Lazenkovsky Palace, or the Palace on the water. Built on man-made island among the lake Лазazienki, which shares the palace in two. Two arcades of bridges are thrown into the park. In the palace-museum there is what to see: ballroom and dining halls, royal baths, study, bedrooms and wardrobes, two portrait galleries, etc. Until II World War II its walls were decorated with paintings by Rubens and Rembrandt. AT 1944 interiors devoured the fire. Restoration completed in 1964. 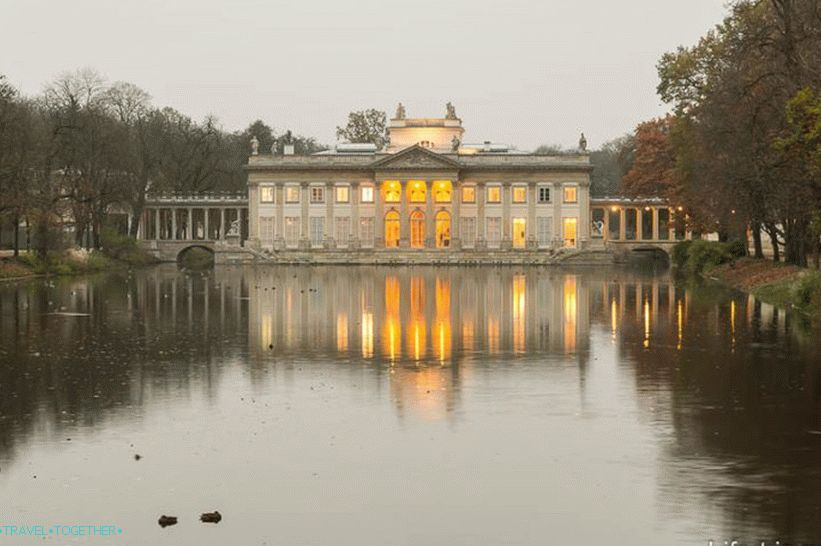 Lazenkov Palace, or Palace on the water 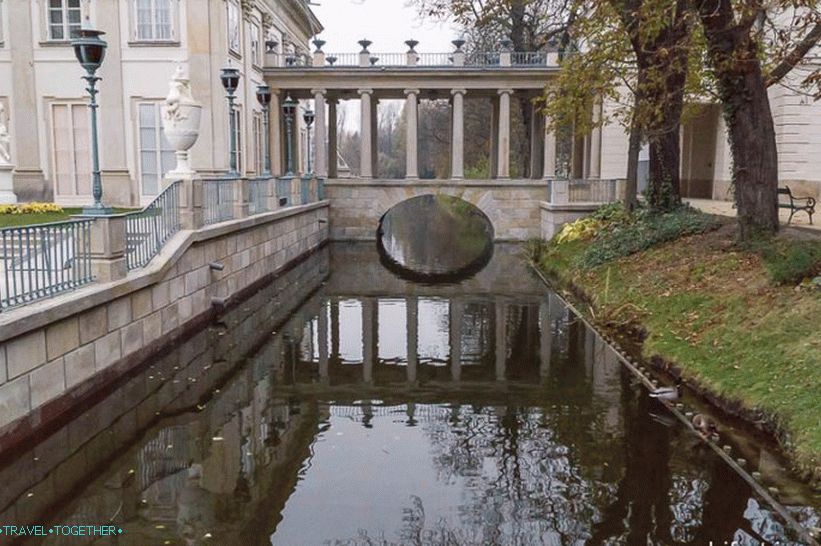 Canal near the palace on the water

Roman amphitheater on the shore of the Лазazienki lake at the end of the 18th century. The favorite place of court peacocks (birds). Very beautiful the building is an imitation of ancient Roman theater ruins. Hall separated from the duct scene. The parapet is decorated with statues of ancient poets. 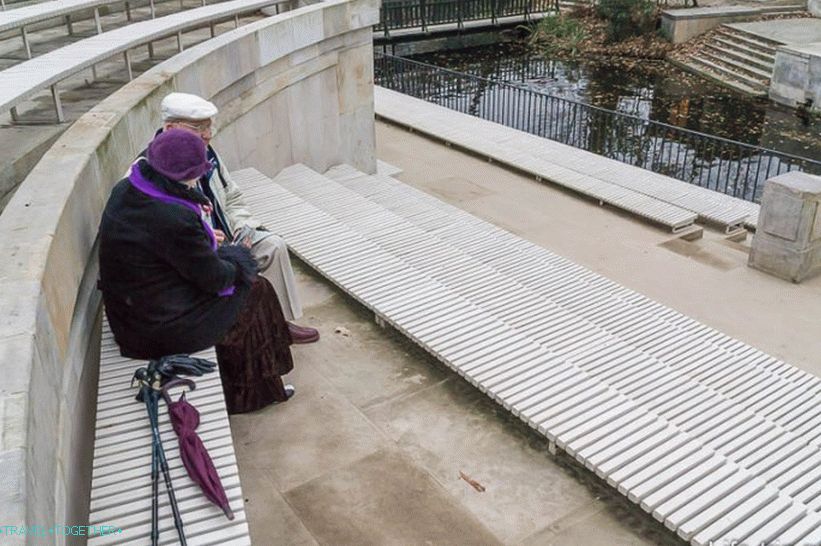 White House (Biały Domek) – a modest square structure (1774-1776). Famous for serving as a romantic destination. dates king Stanislav and mistresses. Numerous, – underline the historians. At the beginning of the XIX century the house served as a refuge. Louis XVIII, expelled from France. Part of the interior “boudoir” survived the war.

Belwederski (Belwederski) emerged in the 1660th, but in 1818 was demolished by order of the Russian government, which was sold. In 1824, rebuilt anew in the style of neoclassicism – for the great Prince Konstantin Pavlovich, and then the Russian the emperor who was visiting Poland. Since 1918 – the property of Poland. Served as a residence for very important people. Of these, the most famous us – Lech Walesa, almost canonized by the Poles for the fact that laid on the blades of communism. Now it is a spare residence. President of Poland.

The Belvedere Palace can be seen in the distance.

The Ujazdowski palace of the 17th century is famous for being donated by King Stanislav for the needs of the state (1784) – under barracks and military hospital. In 1944, it was burned and up to the 70s the last century was in a ruined state. Him offered to demolish to build an army theater. Architects defended a rarity. The Museum is opened in the restored palace. contemporary art.

P.S. Decide to stop in Warsaw, here is a decent accommodation, as once near the park, but near the city center, metro and tram