The first impression of the city beach Hua Hin – stunning. As if he came out on the podium, no end in sight. City Beach – this is a long (about 8 km) narrow (50-100 m) strip of coastal sand almost without vegetation. Limited by mountain Takiab (Khao Takiab) with the south and a cafe of fresh seafood wedged into the sea – with north.

It has a point infrastructure (sun beds + umbrellas, cafes, rental kayaks, kites) – in places of access to the sea, free to the public. There are very few such exits in the center of Hua Hin – 4-5.

The entire length of the beach stretch variegated, often expensive because proximity to the sea hotels or condo, deaf fence. Login and access to the beach through their territory – only for guests.

The status quo is strictly monitored by the guards. Hotels do not want share with the public even the shadow of the green. Such is the local feature, and if you don’t know it, you will stomp on hot highways a few kilometers before you dive on the jay to the beach.

By the way, on the interval from Kondochain to Takiab there are already a lot of free passages to the sea, through each quarter. Alas, there is actually no infrastructure—

Places of mass recreation of tourists (and services for them) are as follows:

All these places have much in common, but differ in nuances.

The beach is sandy and yellowish; in the north – sand is smaller and whiter; in the south it seemed dirtier possibly due to the inclusion of black volcanic sand. Beach clean enough even in “wild” places where there is no infrastructure and beach merchants.

The sea near the coast is muddy, as frequent sharp ebbs and flows raise sand from the bottom. But silt, stagnant, wetlands are not noticeably.

The infrastructure is typical: sun beds & umbrellas, which, if desired, You can stick directly into the sea; cafe with unpretentious Thai food and drinks (tins, necks, juices); rolling something. And here it makes sense to focus on the differences.

In the northern part is dominated by horse rental, since here, on the beach, is their parking. Tourists with with sensitive noses this place may not have to be in its gut. From horses smell. And the sand near the entrance to the beach is suspiciously damp any weather But the northern beach is prettier than others: there is trees in the shade of which you can hide; picturesque boulders, scattered around the coast as a decoration and a platform for photographs.

At the exit – a trough with water, where for 5 baht you can rinse your feet. On the approach to the beach – free guarded parking for cars and bikes (in the central and southern parts of the beach, parking is separate), souvenir rows, mini-coffee shop with good drinks and an office tourist police.

The central part of the beach is the domain of kitesurfers. Here, on the way, at least two specialized schools – with European instructors, equipment and equipment. On the beach There is also a volleyball court and boat and water rental. bananas.

The southern part, at Takiab, is an exotic place. thanks to macaques. The beach here is wider, go to the edge of the sea longer. But on the way you can talk with “ancestors”. They feed on the shore, descending from Takiab – the abode of monkeys. Behave ingenuous and even cheeky. Kids frolic in the lakes between stones, adults are keenly watching the tourists for food in hands.

Strange thing, but usually rob women. Can jump and vomit from the hands of a tin. Or climb on the legs, like a tree, and grab a bun. In general, it is better to keep your distance and be touched. “ancestors” through the camera lens, especially if you are with children. Macaques, I will note, are not aggressive, just hunger and ignorance of the Criminal Code pushes their offense.

At the water’s edge, closer to the mountain, primates are also in order. Usually they feed on what the sea has sent, and are harmless, even shy.

If you do not consult the tide-calendar in Hua Hin (he there is on the Internet, in English.), then you will be very surprised. Sea staggers like a drunken sailor; shy away like a frightened dog. AT some days the edge of the water runs tens of meters, leaving everyone bathers with a nose.

The bottom is gently sloping – you get tired of going to reach a depth of at least belt. But in the tides – and they are also swift – swim very fun. Catch the wave and on its hump to enter paradise. Waves knock off legs, strive to overwhelm, but the undoubted plus of the Gulf of Thailand – a big wave does not diminish, on the contrary, it strikes ashore.

On calm days at 7-10 meters depth comfortable for swimming. AT the ebb of the search for optimal depth is not enough patience, and plunge almost impossible, except to “urinate.” In the tides in 3-5 meters from the shore – on the chest, or even on the shoulders of a middle man growth.

The stones at the entrance are found at the northern point of the beach. AT central and southern – sand.

Sun beds & umbrellas (50 baht / one) put up for a day in places public access to the beach. It happens, especially in the northern, most populous part that they are not enough for everyone. Altogether you can calmly sunbathe a savage: whole stretches of a city beach are empty. But the free shadow can be found again in the northern part, where are the trees. Further, all over, – there is no greenery. On South You can find the shadow of the stones, but not calm – because of the macaques. 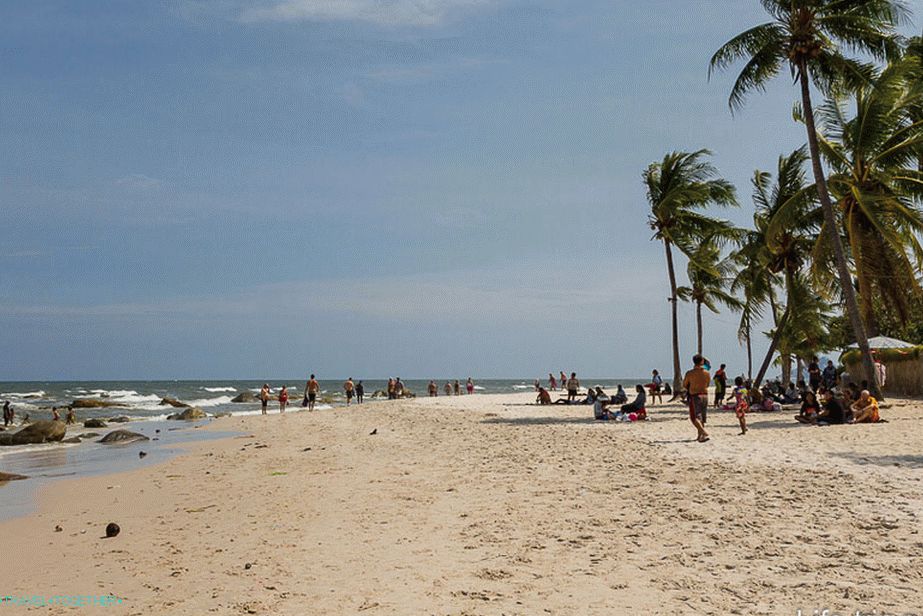 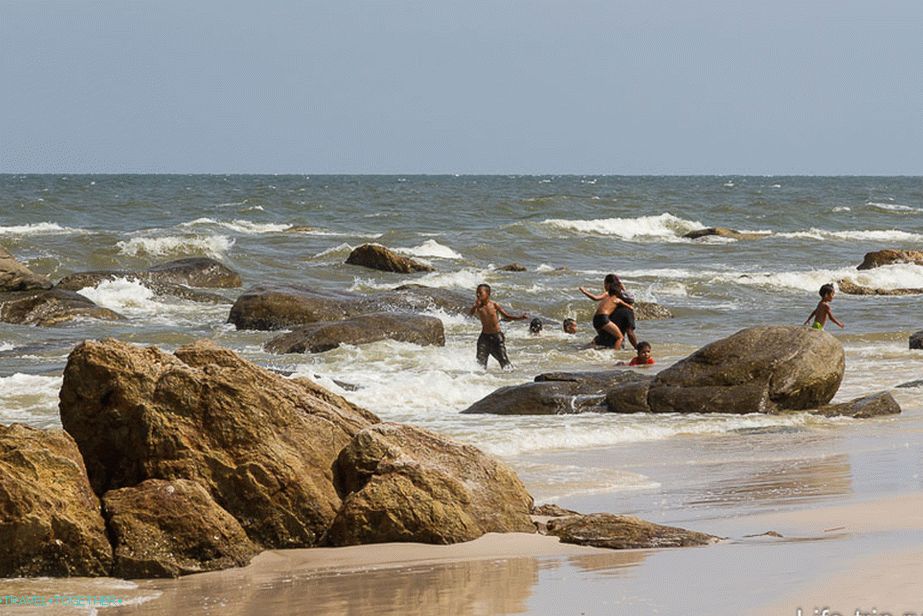 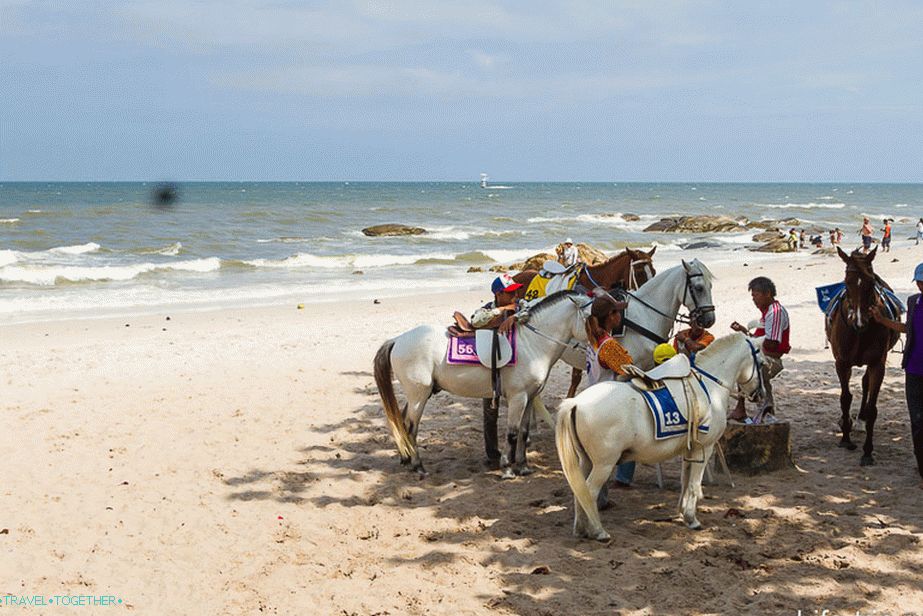 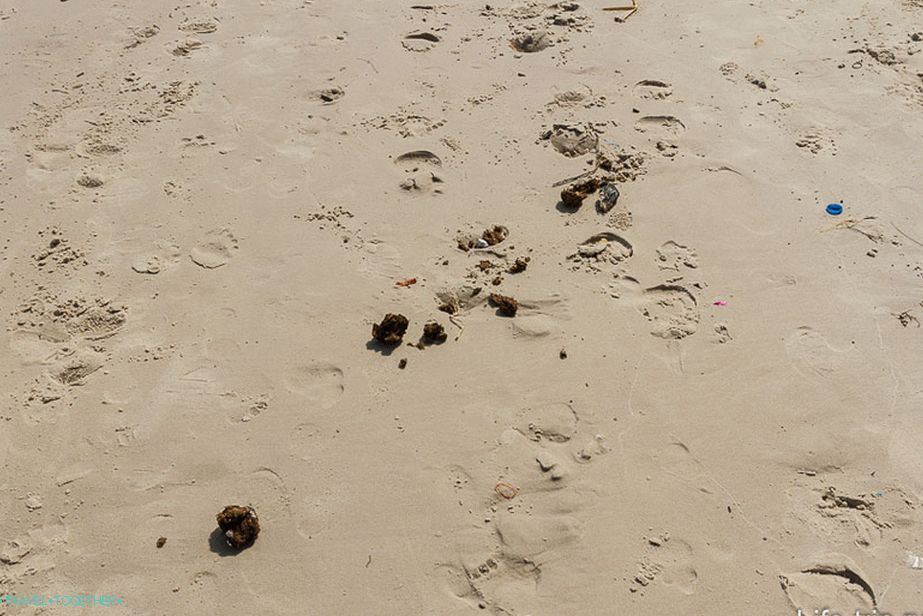 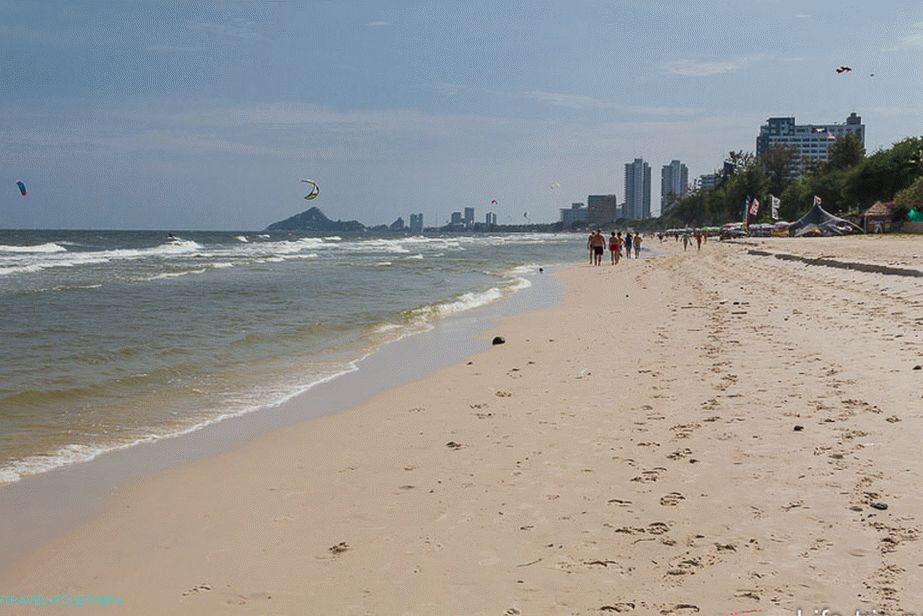 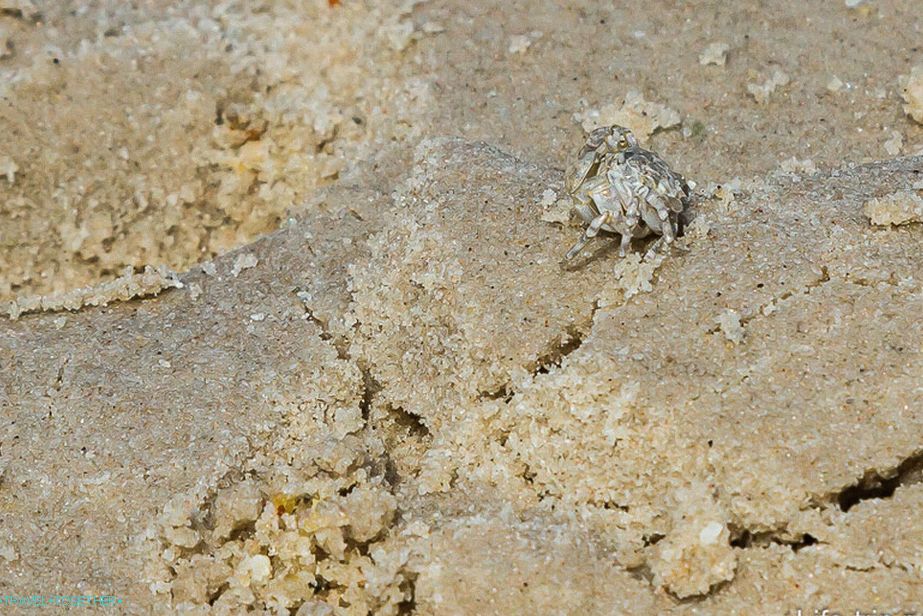 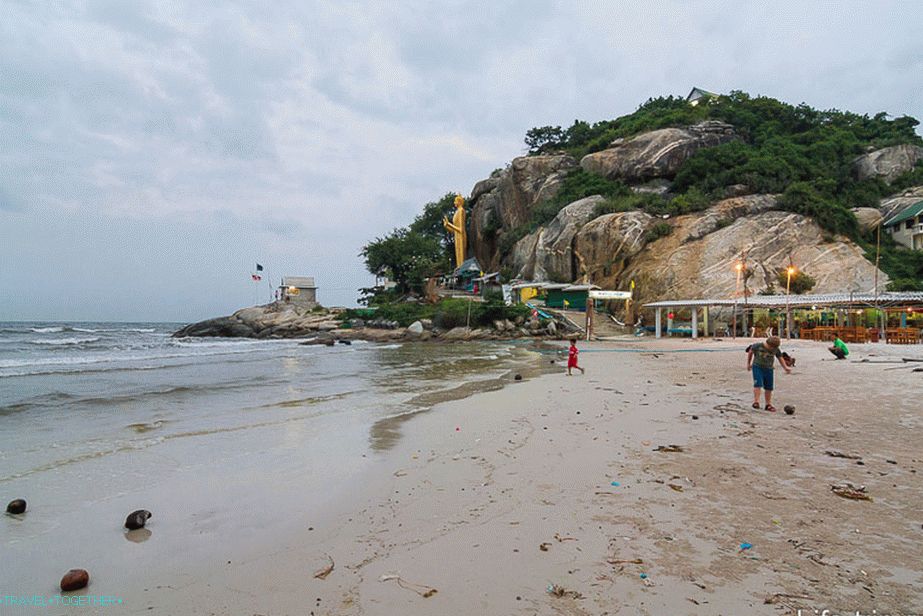 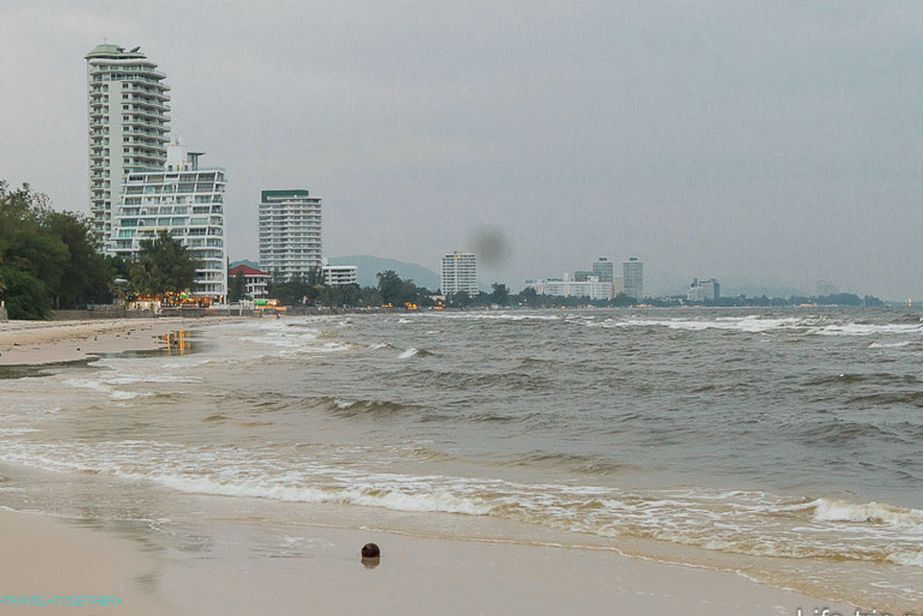 Shops and attractions on the beach

City beach is convenient because you are waiting for the exit civilization with all its charms: coffee shops and cafes with good quality food, “7-11” shops, supermarkets, less often – shops with vegetables and fruit, massage parlors. Especially attractive center and north where do you get on busy highway full of trade and services.

Two steps from the northern point – the street “under the tourist”, it goes parallel to the beach. Here, European food and beer, decorated like toy, restaurants, a modest cafe with Russian cuisine, art shop and jewelry stores, Hindu ateliers and agencies real estate.

In a word, pretty disagreeable. According to it, if you go north, ukhnneshsya in several cafes fresh seafood looming over by sea In a cafe easier / cheaper – noisy and crowded, in a cafe more expensive – decorously noble and quiet.

The central part of the beach is attractive neighborhood with the Market Village. This is the best Hua Hin shopping center, where you can and rest, and dine, and stock up with provisions – cosmetics – clothes

In addition to the Market Village, there is a mass mini shops, massage parlors, a cafe with live music on in the evenings.

The southern part, Takiab, is interesting by its proximity to the temple complex, one has only to climb the mountain, and the seafood market. Market – to the right of the beach, if you face the sea. This is a short street from specific smell and a series of shops. In the trays by the road – ice-covered marine reptiles and fish. In aquariums – live “food” like crabs, shrimp and turtles. There are cafes where they can, for what poke a finger, bake the grill.

Mount Takiab – a local landmark. On her easy climb including from the beach. The mountain is riddled with walkways, stairs, recreation areas surrounded by lush greenery. Everywhere you will be accompany the “ancestors” – in anticipation of handouts or loot. And “mountain” the tribe, unlike the “beach”, is more aggressive.

So, bypassing the small temple complex, you can walk to another on the top – Phra Mae Kuan In, the glorious hordes of macaques. (Im even a monument was erected on the territory.) According to unofficial information, this Chinese temple of mercy, built for “those who are in the sea.”

But even if you climb only the cliff hanging over the beach, get a spectacle: a beautiful view of the seaside Hua Hin. Cities, overshadowed by the Buddha.

In the section between the main road and the city beach, all its length – all hotels and occasionally a condo. And where their No, they will, do not doubt. Houses for rent is not found here. Such is the specificity of Hua Hin. Hotels – pretentious, for the wealthy людей типа Hillton

There are outwardly simpler, but with a high price tag. A condo especially new – tricky. The angle in them alone does not remove: only through agent intermediaries. The exception is probably Kondochain. (Kondo Chain) 5-7 minutes from the beach. True, this is not quite the center. city, south. Free studio apartment can be asked on the reception.

If available, conduct and show. Differentiated prices Depends on a tourist season. From November to February the condo is choked tourists, despite the double price. From March, the condo starts released, and housing prices are falling (from 10 thousand / month.).

The village of Takiab is a calm, fashionable and expensive place. Hotels in The area around the beach is mass, with prices above average.

I advise you to look for hotels along the beach on RoomGuru, very convenient service for comparing prices in different booking systems. You can still read our article on housing in Hua Hin and the Royal Hotel Express Hua Hin.

How to get to the beach

On foot or by bike, from the main route Petch Kasem Rd .: A) North point of the beach: on the ring road from the railway station Damnitnkasem Rd. B) Central part: three jays in the area of the viaduct to Market Village, before and after. B) South-Central: for Condo Chain (you can walk through the territory despite on the guard).

On a tuk-tuk or bike on the main road Petch Kasem Rd .: D) South point, Takiab: go only straight ahead, bypassing the road junction, to the ultimate tuk-tuk. Here continue straight ahead until the nearest turn to the sea at the foot of the mountain.

Routing green tuk-tuk (10 baht / person) goes from the center to the village. Takiab. From the ultimate tuk-tuk to the beach – 10-15 minutes walk.

City beach on the map

The map shows a point in the northern part of the beach, where the entrance to him, there is the most expensive from the railway station. Essentially from here the beach Begins and continues to the south, north of the beach anymore.