Thakiab beach is located right behind the Takiab mountain. (Khao Thakiab). It resembles a parabola, or half a lime. “Eyes far away” (km 5-6), but the infrastructure focused on a small area near the mountain. In this place the beach wide, a hundred meters, and even more. During low tide it is still more visually increases, and stomping up the water – not to melt

The structure of the beach is as follows: a strip of water, a strip of sand, a strip trees.

At the junction of sand and trees is a beach town: sunbeds and umbrellas, unpretentious cafes. On the free sites stuck scooters, boats, horses. All this is rented. Behind the trees – hotels, houses, 6-7 lanes (Thakiab Bay Alleys), for each of which You can freely get to the sea.

The sand is fine white with an admixture of black volcanic. By This beach looks untidy, dingy. Sensation intensifies during ebb, which are not uncommon. The sea leaves, leaving behind is a mouse plaque.

Takiab – beach for everybody. Somewhat reminiscent of the bazaar – chaotic, without clear boundaries. He is not called uncrowded, although supply (sun beds and umbrellas) clearly exceeds demand (the number of vacationers). There are a lot of very different people, each engaged in his by deed. Tourists are lying or walking, less swimming, boating. Thais collect in the shallow waters of crabs. Fishing children (near the mountain a small fishing village with a “port”) collect shells and splash, not letting go of ice cream—

The bottom is gentle, sand with a small pebble, 5-7 meters from the shore – shallow water, as in the central part of the city beach Hua Hin. Water the same muddy due to almost constant waves. At low tide additionally exposed 4-5-meter strip, covered with dirty by sand. Many meters ahead – the sea knee-deep. Little men it seems sticking out at the horizon towers. And bathers, lovers windsurfing (board with a sail) and scooters have fun side by side, about one distance from the shore.

Divers and loungers and umbrellas (worse – better, from different hosts) is more than enough. For tourists looking for a place under the sun is serious competition. Our brother trying to lay “from the threshold”. Because the price of sun beds – democratic and fixed (unlike Sai Noi beach): 50 baht / person. Huge spaces beaches allow you to sit on your towel, i.e. for nothing. But, in Unlike the city beach Hua Hin, here you do not want, and savages almost not. I admit that the matter is that pressed sand of color gunpowder, not very inclined to soak up. Although trash on the beach Takiab no more than any other Hua Hin.

Unlike the city beach, there is a whole range of spreading trees and palm trees, the shadow of which belongs to the masses. Including Horses who sleep peacefully while waiting for work. 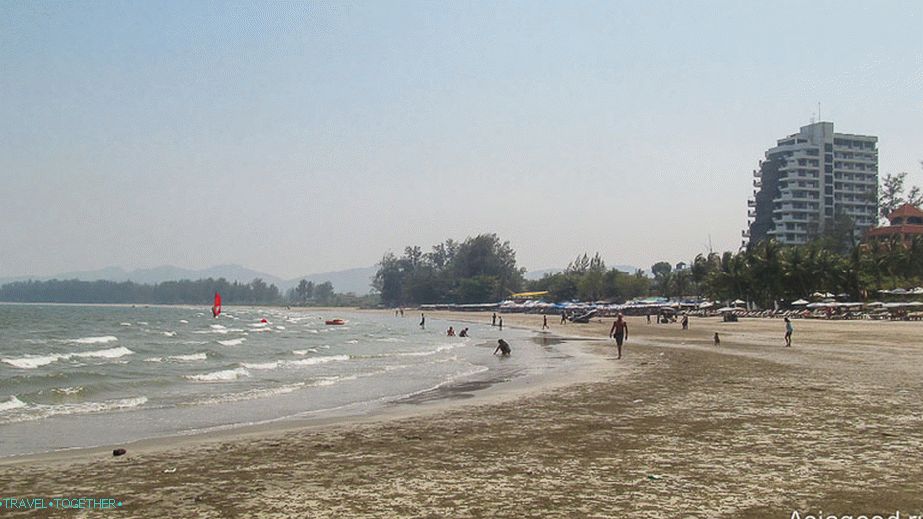 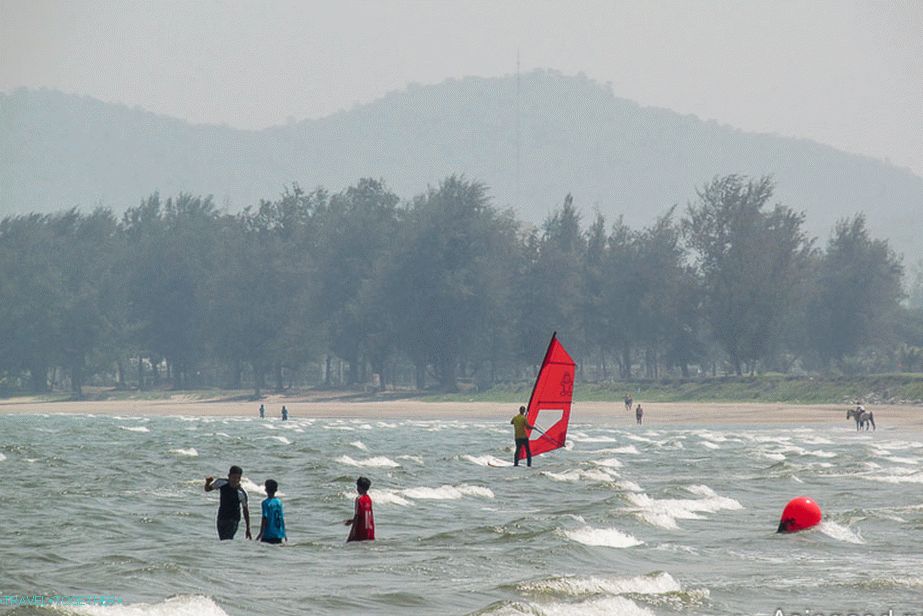 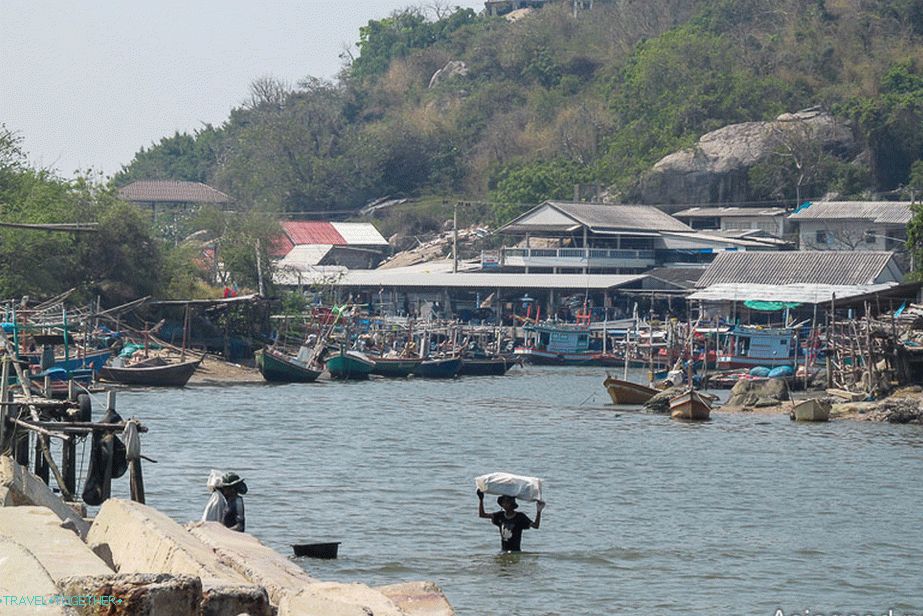 Shops and attractions on the beach

Takiab beach originated in a fairly busy area. In the lanes, leading to the beach, edible does not smell. There are only houses and hotels for fences. But on the road from which these lanes turn, in five minutes from the sea there are cafes and shops 7-11 and Family Mart, laundry room with washing machines, and a few benches. Two Once a week, the temple market takes place, where everything is procured because to the nearest Tesco you need to go to Hua Hin (there is a closer, but it is small and the public does not go there transport). On the beach within the loungers, there is also a couple of ones. AT the menu is sea food – and the food is most likely fresh because next to the mountain itself is a fishing village with a bizarre fleet on joke

By the way, this extreme point on the beach is the most picturesque to the eye. There is something to catch on. Above the sea stands the stone side of Takiab. At the foot are fishing houses. From land at the very mountain in the sea plunges a ridge of slabs and stones. It is small here, the wildlife between stones so teeming. Therefore, the herons and “hunters” with hooks are not less than the crabs that hide from them. Unfortunately, before the main attractions of Takiab – temples, Buddha – from the beach get there, just a detour.

Next to the beach there are plenty of hotels of the most varied sense: stylized as a royal palace (from 8 thousand baht / night), panel-box, similar to the condo (from 3.5 thousand baht), low-rise home bungalows (1 – 1.5 thousand baht) and even a whole condominium (from 2.8 thousand baht / night). Two hotels look right on the sea – True, the windows in the suites. Over a dozen you will find if you walk the side streets. There are suggestions in 10-15 minutes walk away from Takiab to the “military” beach. Definitely, Thakiab beach – a hotel place, in contrast to Sai Noi beach, where (due to its proximity to the private beach of the royal family) construction business is not allowed on the gun shot.

In the alleys – it is possible to have houses for rent, but not one we did not see the “house for rent” signs. Usually on Takiab live in condominiums that are missing here: Marakesh, Sickrays, Breeze, Wiman etc. All of them are located within walking distance of the beach. If there is your transport, you can move away from Takiab to the side of the road, there I saw cottage villages.

Hotels nearby I advise you to search for RoomGuru, a convenient service for price comparisons in different booking systems. He is fast and easy will show you the range of prices for the hotel you need. In the same Asia for example, there are lots of offers on Agoda.com that are much more interesting than on exactly the same hotels in Booking.com.

How to get to the beach

On the bike, auto. Drive along Petch Kasem rd. south, sideways Takiab to the ultimate tuk-tuk. Here is a fork, keep moving on the road to the right. With it, turn into any lane, they are all lead to thakiab beach. From the ultimate tuk-tuk to the beach – 4-5 minutes ride away

On route tuk-tuk + on foot. On the green tuk-tuk (10 baht / person), which goes from the center, to the final one in Takiab. Then – as described above, only along the road on foot (15 minutes).

Takiab on the map