In different but numerous descriptions on the network, the territory of the temple Xi Rei is solemnly nicknamed the “temple complex”, although in my the sight is an ordinary temple on a mountain. Not without its zest, of course, but this is definitely not a temple complex, for there is only one temple – Wat Si Rea, the other I have not found. As in any other Buddhist temple, there is a tree of spirits here, monks’ houses, a place for meditation and prayers, the main building of the temple with lying Buddha, and that same zest – a reduced copy of the Myanmar Golden Stone Buddha.

2500 years ago on Mount Chaytiyo in Myanmar (aka Kyaiktiyo Pagoda) a couple of demons dragged from the sea and set on the edge the abyss is a huge boulder, so much so that it can swing and knock down a few people. But in the legend there is another character who received as a gift from Buddha Shakyamuni strand of hair, which he decided to keep in a stupa, and stupa built on the very boulder. Thanks to the sacral erection, the boulder remained standing in its place for hundreds of centuries, in spite of winds, hurricanes and pilgrims from around the world. Afraid of stone only women, and therefore they are forbidden to come close, not to mention touches.

Wat Sirey (in some sources it is called Wat Ko Sirey, and in Thai this is Wat Si Rea) built in 1961. He stands on the top of the hill of the island of KoSirey, which is separated from the main of the Phuket massif by the river, where the fresh waters of the Ta Chin River and salty Andaman Sea. The temple is not yet spoiled by attention. tourists like this whole part of Phuket province. Distance and the division of the islands is so insignificant that man the ignorant will not even notice the moment when he will pass from one islands to another. I recommend to see the temple on the mountain. Wat Si Rei – he deserves an hour and a half for inspection and shooting.

From myself I will say that I like the most Thai here temples that are somewhere on top with panoramic viewing platforms, because most Thai temples are very similar to each other, and when you look at one-second or third, then you will think about the fourth one a hundred times before you go – it’s boring. But if the temple has some kind of chip, then the cutest thing there go, and any Thai temple can be regarded not only as religious landmark, but also as a place where nice to stay Sit back, remove from the mundane, think, read a book in the shade and, in my opinion, doing all this with a look somewhere on the hill – much nicer, because the eyes beautiful, and a breeze guaranteed. 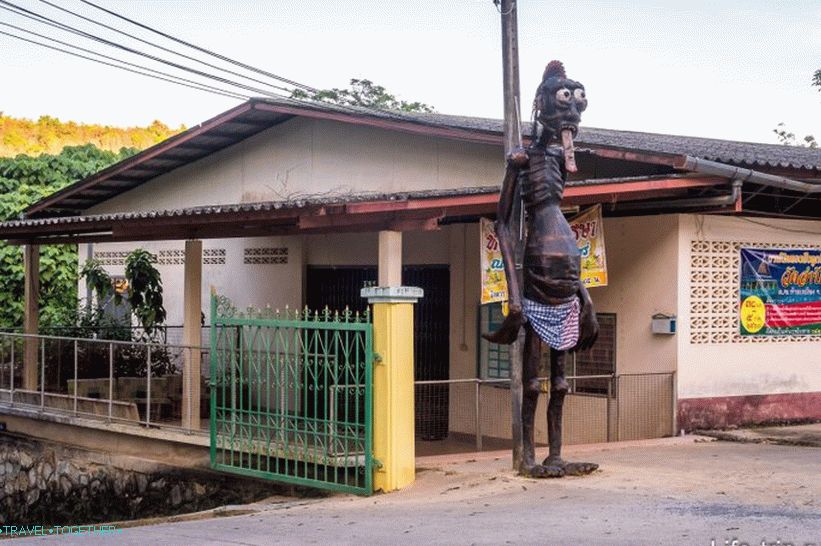 At the entrance to the territory stood a strange cel 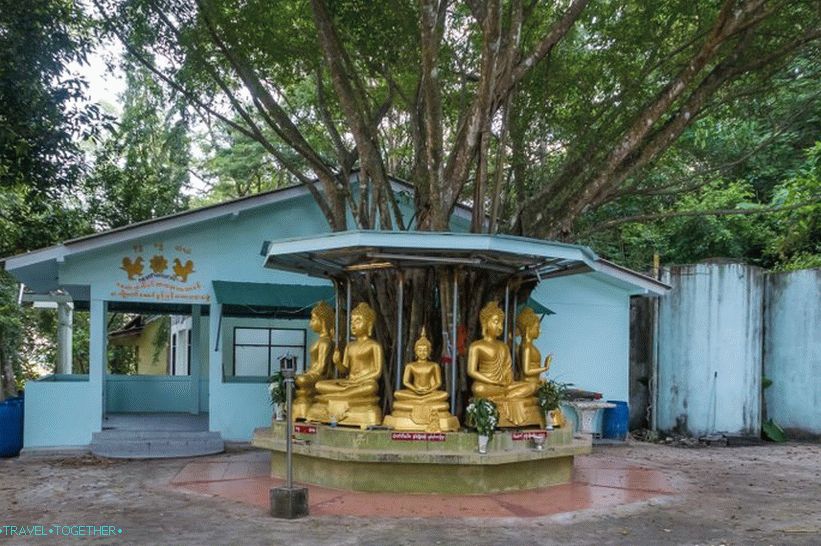 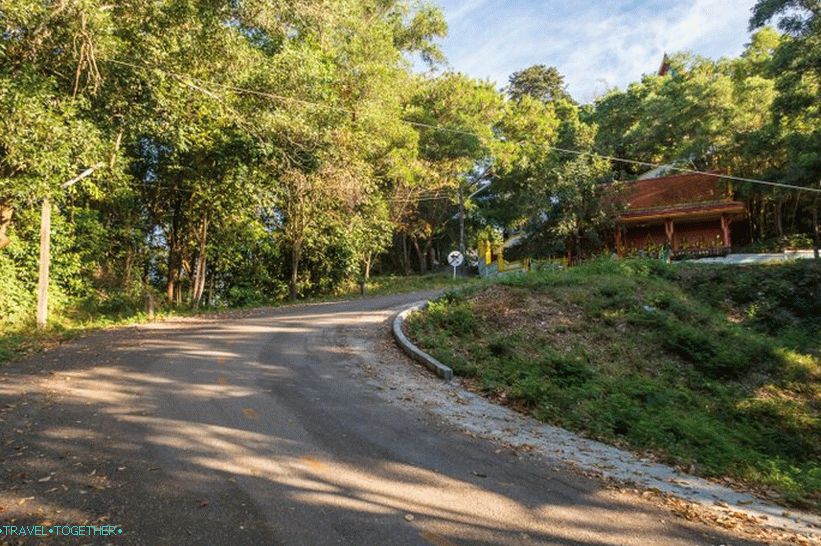 Parking upstairs near this building 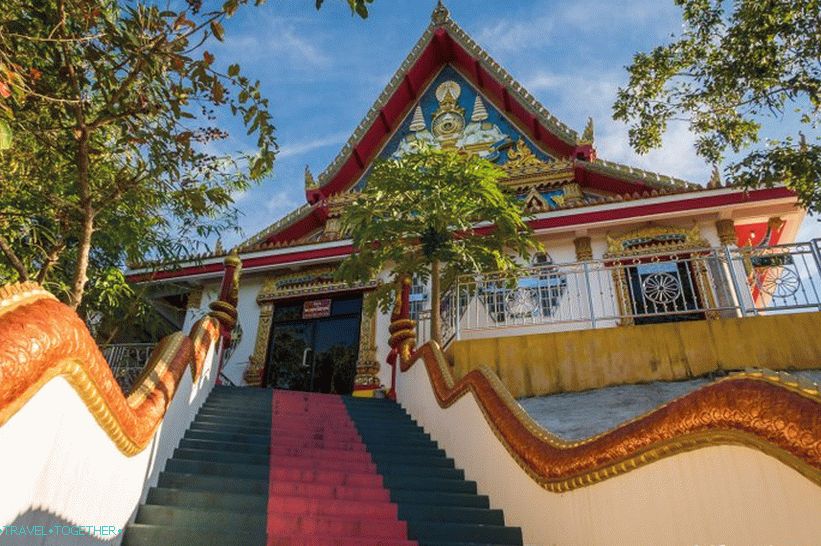 From the parking stairs a few more minutes. 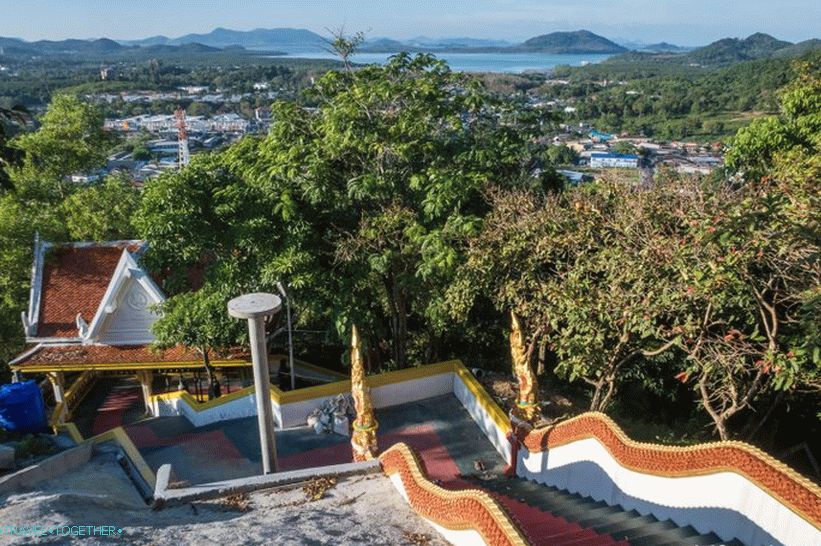 That same ladder, view down 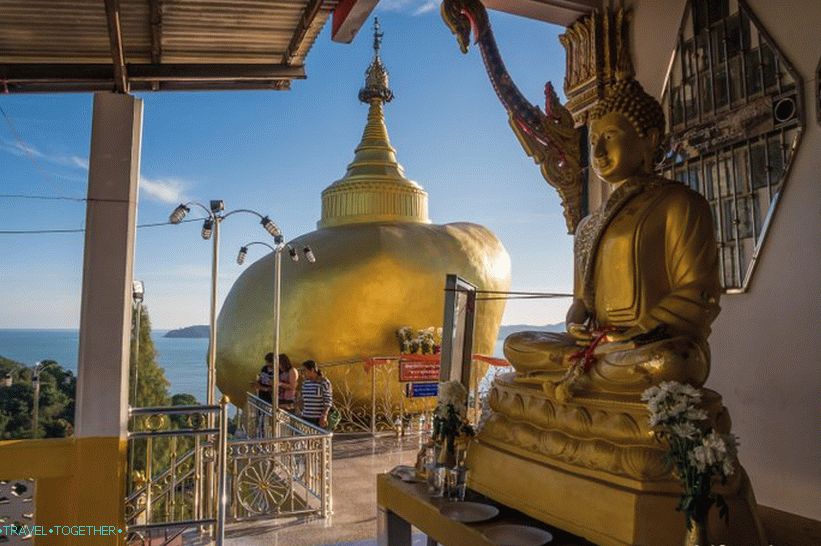 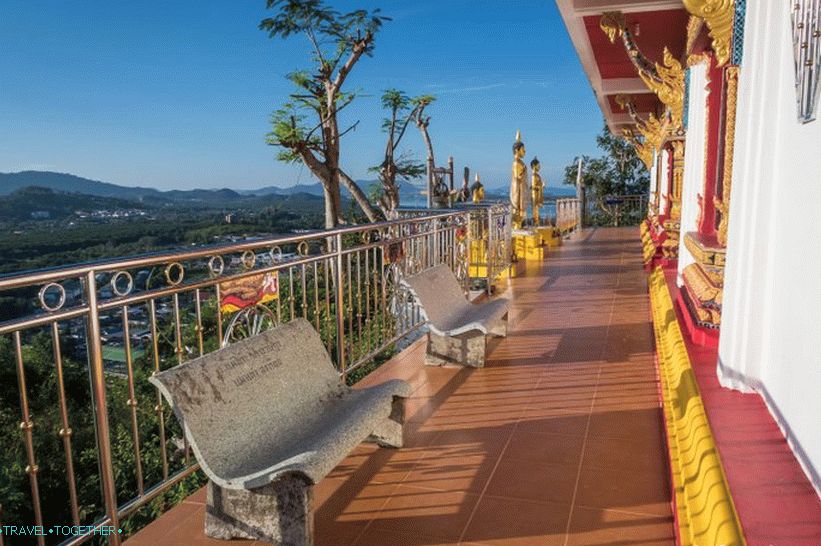 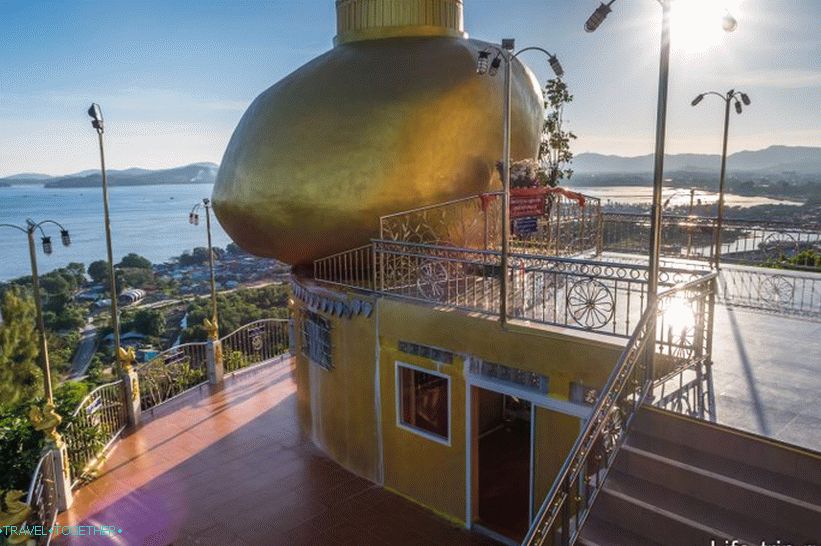 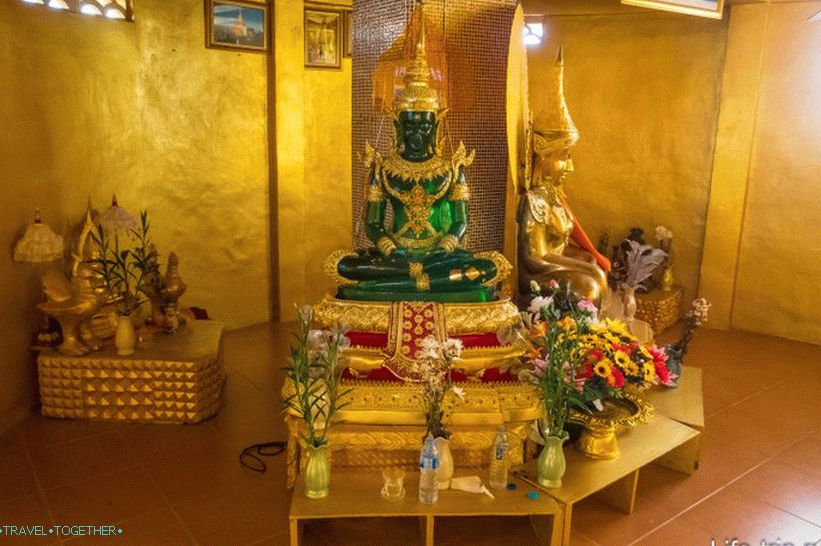 Inside the golden stone Buddha statue

By the way, such a moment. Everyone knows that when visiting any Thai temple before entering the need to remove shoes. Not always check (sometimes temples are empty), but I personally always follow this to the rule. But it was during my visit to Wat Sirey that I had Problems. The site around the stone and around the whole building is paved tiles and she terribly basks in the sun. So, that burns straight. Therefore, I moved there by rushes, trying to stand only in the shadows. Socks would not hurt.

The temple is open from dawn to dusk. Mandatory compliance dress code: closed shoulders and knees. Women are not driven away from the stone – still not a real relic, although it was built with the assistance of Myanmar authorities and clergy. Here by the way rolls over the number of plates with round Myanmar letters everywhere. The Golden Stone in Phuket is more of a landmark, than a cult place, although it does not interfere with the superstitious and faithful Thais bring here the gold leaf and ask the Buddha about the vital.

The main building of the temple of Wat Si Rei is located below, there I and He left the car, although it was possible to climb it and to the very top serpentine, as I later learned, there is parking. Upstairs is building with a lying Buddha and Golden Stone. Don’t bother you the barrier is down on the road, it is always open and everyone rides bikes and machines to the very end. However, the choice is yours – or leave transport below, or climb it up.