Phuket Island, Andaman Sea, near the western coastline of Thailand. It is the largest Thai island and Thailand province of the same name. Most of the revenue It gets from tourism, so it is not surprising that it is famous the island is primarily for its resorts and beaches. so we’ll talk in this article about the best beaches Phuket Here there are more than enough of them, unlike the best ones. beaches of Pattaya.

Particular attention should be paid to security when bathing Thai waters besides jellyfish and hedgehogs, you may stumble dangerous reverse currents in Thailand, sometimes capable carry even a trained swimmer far into the sea.

Patong Beach Phuket – is the heart of the island, and those qualities that have won him popularity, and became the cause of many complaints. He is big, crowded, noisy and bright. And yet people flock here like flies on honey The main reasons for the success of Patatong Beach among tourists two: beauty and safe nightlife. Everything else – shops, restaurants, cafes, spas, etc. – only cherry on cake. Patong Beach stretches for 2-3 km, and the largest a crowd of people falls on its central part. And do not think that you will be able to park your car nearby the beach, even it would not be easy to cram a bike anywhere. North side of the beach Patong is especially pleasant for relaxation and not so crowded. Less people, parking space, lots of food trays and pure blue water. Near the beach is located, famous throughout Phuket, the street Bangla Road, where you can find unforgettable sex entertainment. So if you flew in Thaiseasex tourism first recommend visit precisely her, only better bypass the side of Thai trances. But if you feel sympathy for them, then welcome nagrandeznoe show Simon Kabare. The sea on the southern edge of Patong Beach, near the bridge, is not always clean, but under the bridge often sit fishermen from the village (fishing in Thailand), fishing in the old fashioned way, which is worth a good photo. AT anywhere you can rent deck chairs with umbrellas, try your force in sailing or ride a jet ski.

Near the beach you can book a room in one of Phuketas’ cheapest hotels Service: Andaman House, The Yim Siam Hotel and Mochic Nanai.

Very clean Nai Harn beach in Phuket, settled in a small the bay between the green hills. Rest on it more calm than on the beaches of the west coast of the island. On this spot there is everything: snack bars, hotels, shops, and at the same time, this beach there remains the feeling of a tropical paradise. Not far from the beach in the water column there are fascinating coral reefs and exotic inhabitants seas that you can admire while diving Phuket

Nai Harn Bichochen big, with a soft fine sand and clear bright blue water. In the bay enough crowded, but not so much that, as the saying goes “rub priests “. On the entire coastline of the beach are deck chairs in two rows, never employed fully. Between the beach and the lake, located across the road from the coast, It is worth a modest and not too noticeable temple, which was recently expanded The lake behind the beach, once natural, is now huge concrete pond where you can rent a boat to ride with children.

After Patong, Kata Beach on the island Phuket is visited by the largest number of tourists among all beaches of the island. This wide strip of coast littered with white the sand and the blue sea, during the sunset it becomes especially beautiful A selection of restaurants, shops, hotels and night clubs are here. is huge. Kata Beach is renowned as a great place for a family holiday. in Thailand. The central part is the oldest. Here, even the night rages, There are night clubs, bars and restaurants. The southern part of Kata Beach The beach is framed by two large hotels, this area is young and constantly is built up with new shops and restaurants, but they act mostly by day On the north side there is a small temple. Kata By the way, this beach seemed to tourists one of the best. beaches of Thailand. Near Kata Beach is a dinosaur theme park, where there is a mini golf course and its own volcano. And in a pair kilometers you can see the statues of the Big Buddha on Phuket, next to which there is an observation deck, from where it opens magnificent view of the coastal beach area.

The second longest beach is the Karon Beach in Phuket. On This beach holidaymakers can enjoy an unusually wide strip white sand and a good selection of nightclubs and restaurants. This The beach is considered the cleanest and most beautiful in Phuket. And at the same time, on Karon Beach is never too many visitors that you can regarded as a virtue, although the reason is the highest prices on Phuket Island, which of course is a disadvantage. Karon Beach is famous for its purity, including exclusively white. sand, issuing a characteristic creak under their feet. Clean sea shallow enough near the shore that attracts families with children (read more about the features of recreation with children in Phuket). But it is only if there are no waves, but the waves appear here quite often. The most favorable time to visit Karon Beach is from December to January. Lounge chairs are paid, you can also rent equipment for surfing.

For those who are tired of the sultry heat, can relax in the nearby located, drowning in shady-tropical vegetation, Dino Park. It is a park where you can admire dinosaurs playing mini golf try a Thai and European kitchen.

If you want to not only relax near Kata Beach, but avoid his crowd, stop in a small picturesque bay of Kata Noah Island Phuket. This is a wide strip of white sand with transparent water during the peak season, and since it is far from beaten tourist routes, this beach is quite quiet. If you do not look it specifically, you can not notice. In addition to the two resort hotels on Kata Noi Beach, there is almost nothing here except Thai massage salons, convenience store and several pubs designed to living in Phuket hotels. The northern part of the beach is often visited. surfers, as there are awesome waves. In the low season of the wave on Kata-Noi beach are getting especially high, so that surfing more difficult to do. Guests of hotels are provided with sun beds for free, others you will have to pay 200 baht for a couple of sun loungers and an umbrella that is the standard price for the island of Phuket.

The popularity of Surin Beach in Phuket is fully justified – along the spacious beach with wonderful sand and clear warm water there is an abundance of cafes and restaurants. Perhaps he is too popular, because in some places beach loungers stand in four to five rows. But the sea and the sand here are so wonderful that, despite the crowds, it is still one of the best beaches on the island Phuket Swimming in the calm sea is very pleasant, although jet skis are sometimes annoying. 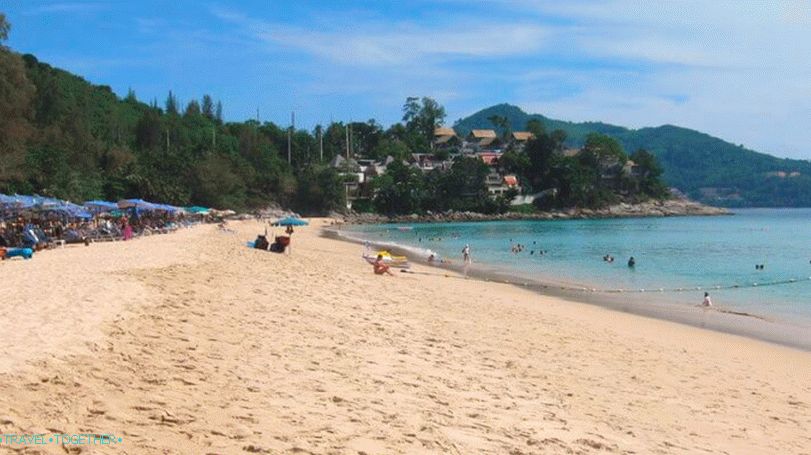 Surin Beach has all the conditions for training. water sports, including snorkeling and surfing. Here There is a shop where you can rent the necessary equipment. Along the beach are lined restaurants, shops, spas, and bars.

Naturally, this is not all the beaches of Phuket Island, in this article we described only the most popular and beloved by tourists. I recommend you to ride a bike (read about the features of the rental bike in Phuket) and try to your taste each of the proposed above the beaches.