Surin Beach Phuket is both resort, in which there are several hotels. It is located almost in the center of the island’s western coastline. From the capital to it is about 25 kilometers, and from the airport – sixteen. Bang Tao Beach is located north of it, but you can get there only on the highway, as they are separated by coastal cliffs. Overall Surin Beach is about a kilometer long, with a width of 40 meters.

Due to the fact that this place is preferred to choose to relax many of the rich and famous people of Earth, Surin Beach is often called the beach “millionaires”. However, this epithet is fully refers only to its northern, most isolated part. There, where is the bay of Pansy, on the bank of which two of the most The island’s fashionable hotels – Amanpuri and The Surin Phuket. This paradise is separated from the place for the plebeians coastal cliff, so you just won’t get there.

Surin Beach Phuket is one of the most equipped. In addition to hotels, there are several restaurants and bars, there are major shopping centers of Phuket. Tourists are completely optional leave it to have fun and to spend time. To their Thai massage salons, excursion bureaus, work motorbike rental companies. 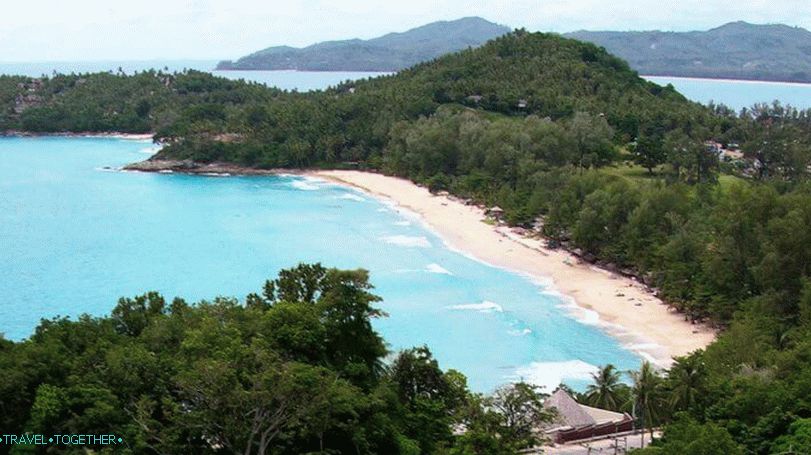 Its main difference from other beaches of Phuket is the lack of a highway that elsewhere divides residential and recreation area. Here the trail runs two hundred meters. east, and the embankment is occupied by a pedestrian zone, lined with shops and small cafes. In addition, practically there are no palm trees, and the life-giving shadow gives local trees, something resembling our pines. 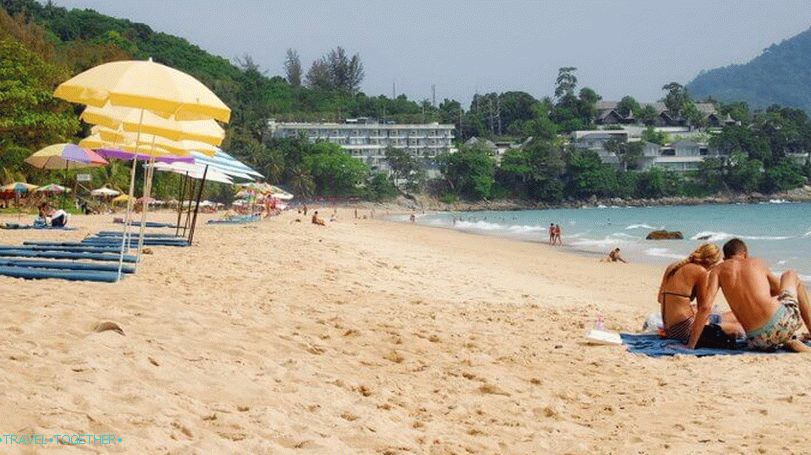 From the beach is quite easy, just half an hour walk, you can get to the neighboring coastal areas – Laem Sing and Bang Tao, on each of which you can find something particularly interesting, which is there are no other places. 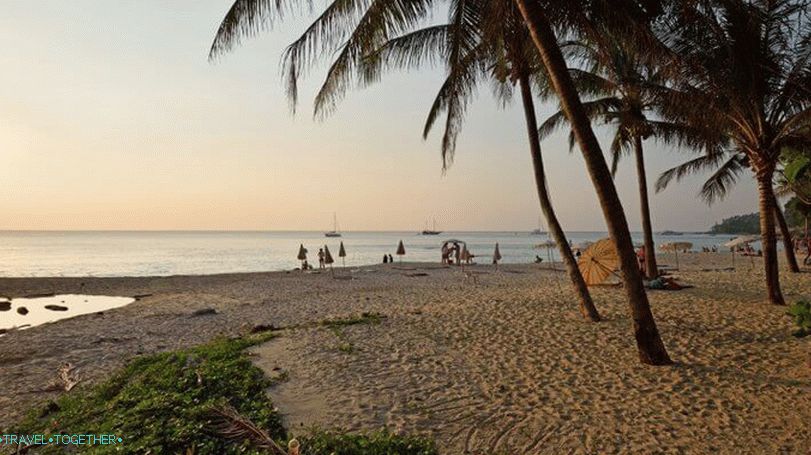 Features of the Surin beach area

In low season the beach is heavily influenced by monsoon winds that accelerate the high waves. Swim at this time of year it’s just dangerous there (but you can do professional surfing). Therefore, the number of sun beds and umbrellas is halved, compared to the high season, when on three or four rows of places rest you can hardly find a free place. If you arrive at Surin in December, you can enjoy all the splendor of warm sea, the entrance to which is very shallow, which makes the place especially attractive for couples with children (read more about prices, weather and beaches of Phuket in winter). At the same time of the year in the south parts of the beach set a temporary pier for boats. this one good diving board, and a stony nearby the shallow is a paradise for snorkeling and a tube. It just teems with underwater wildlife. A warning! Strong excitement during low season is not the only danger. Usually offshore traits arise strong reverse currents that may not cope even professional swimmers. Therefore pay attention on sold out, and if available, first evaluate your strength, but better completely give up swimming.

Fun at Surin Beach is also largely dependent on of the season. In high you will be offered and water skiing, and jet skis, and traditional “bananas”. Summer rentals open surfing boards. If you’re a fan of gliding on the crest of a wave, then get all the positive emotions you could count on. 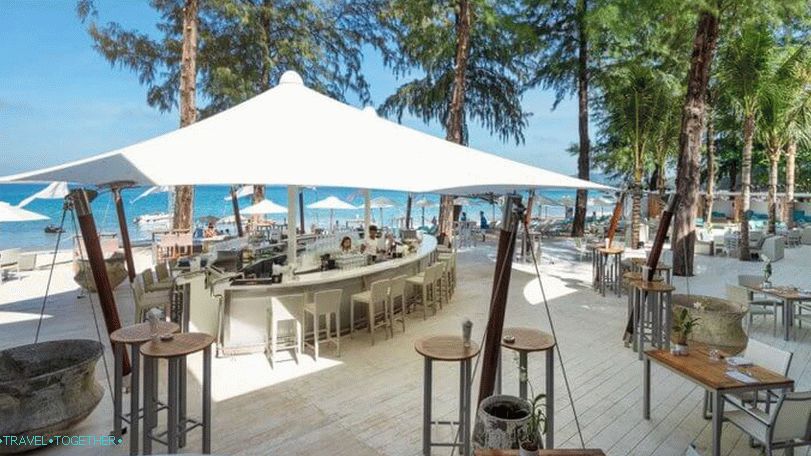 All-season entertainment means numerous restaurants and bars, the main party place of which is Catch Beach Club (read about the best clubs in Phuket), on the veranda of which sometimes salty spray comes. In addition to the fascinating beauty of others species, there you can taste different dishes with live music. Price tag in this place is quite high, and if you do not aspire to visit pathetic places, then find something more acceptable for a wallet not will work. Surin’s restaurants spoil their visitors with a rich menu, the list of which is not only Thai, but also European dishes. Yet again It is worth noting that the price tag for a modest dinner may shock you. If you just want to satisfy your hunger, then contact the street. makashnitsy, where the proposed standard Thai beach-package: noodles or rice with meat.

Basically, you will not be hungry, even if you are not all day to get up from the lounger. Local peddlers provide you sweets, fruit and ice cream.

The large stores on Surin Beach are Pimol Minimart, Plaza, where sell clothes, accessories and shoes. Still have Lemongrass, specializing in natural cosmetics, mainly oils and lotions. If you are interested in products and manufactured goods, it is better to go. at Bang Tao, where the Tesco Lotus hypertext works. Right on the beach merchants offer all kinds of small things – scarves, jewelry and souvenirs of dubious quality, but invariably authentic Thai. AT Shops on the street along the beach the choice is richer, but nothing serious you do not buy there. Read more about all this in article about shopping in Phuket.

Surin Beach Beach Hotels in Phuket – not too much fun cheap. Even though most of them are not the first line, and behind the road, passing 200 meters from the shore. Cheap guest houses can be found at Bang Tao, where rooms are available for rent. different terms, from days to months. Choose the most suitable The hotel can be on sites hotellook.ru or roomguru.ru. And the best of them You can see in the compilation below.

How to get to Surin Beach

Getting to Surin Beach in Phuket from Phuket Town is possible at municipal buses. From the bus station to Ranong Road they depart at half an hour, and from the old bus terminal – every hour. They are painted in blue on the plate. written Phuket – Kamala – Surin. There is a flight to Bang Tao. Go about an hour. If you are going for shopping in Central hypermarket Festival, you can get to him on the same buses.

Transfer to Surin Beach from Phuket Airport takes about half an hour. Minivans to Kata Beach and Patong pass by him, the track It is located two kilometers to the east. Therefore it is better to order either local taxi, the price of which will not exceed 600 baht, or in advance book a transfer. About the advantages and disadvantages of this type transport you can read here.

On a rented vehicle

If you rented a car or scooter, then go to Surin Beach can be yourself. From the beaches of Knighton and Nai Yang, go on main road to the south, to the Heroes Monument, after which turn right and follow the main road for another minute Fifteen, until the moment you see the sea in the distance. Look for a turn to the right and follow that direction. If you overlook the landmark, then rush to the Kamala beach. From Phuket Town go north to the same Monument, but turn off left. From the beach Nai Harn is better to go along the coastal road, bypassing Kata, Karon, Patong and Kamala.